TV renovation expert Cherie Barber has revealed how she transformed an outdated bathroom for under $10,000 – and her tips to help you do the same.

But Cherie managed to pull this one off in Sydney’s inner west for $9,000 by keeping the existing layout of the room, painting the walls, direct stick tiling over the old tiles and updating the fixtures.

‘You can save thousands by sticking with the same layout of your bathroom,’ Cherie told FEMAIL.

‘I also think for every job you should get three quotes before you settle on one.

‘With the shower screen installation in this bathroom, it would have cost $2,000 if I’d have gone with the first quote. In fact, the owners ended up only paying $800.’

BEFORE: TV renovation expert Cherie Barber has revealed how she transformed an outdated bathroom for under $10,000 – and her tips to help you do the same 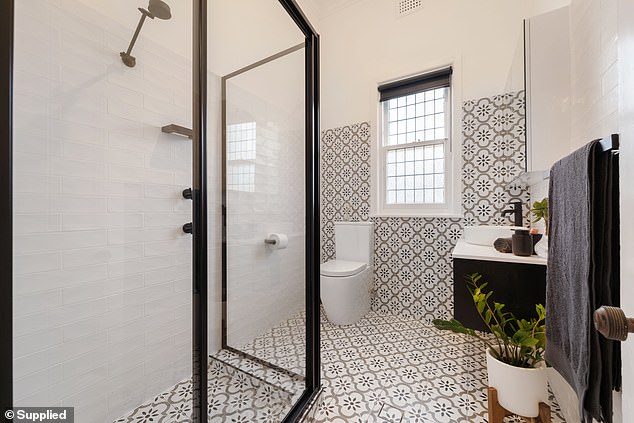 AFTER: Cherie renovated this bathroom in Sydney’s west for $9,000 by keeping the existing layout of the room, painting the walls, direct stick tiling over the old tiles and updating fixtures 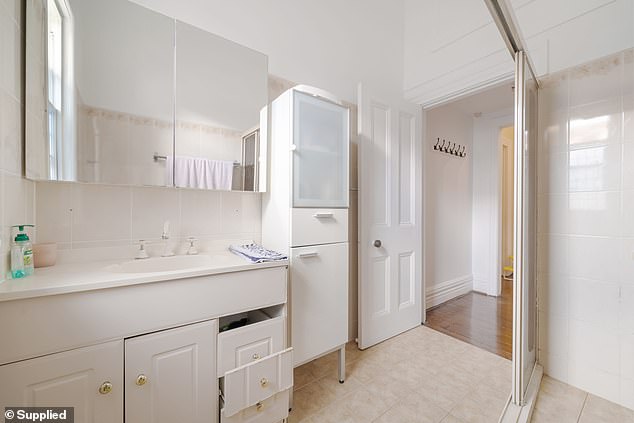 BEFORE: While bathroom renovations typically cost around $20,000 in Australia, the TV expert said you can save money by keeping the existing layout of a space 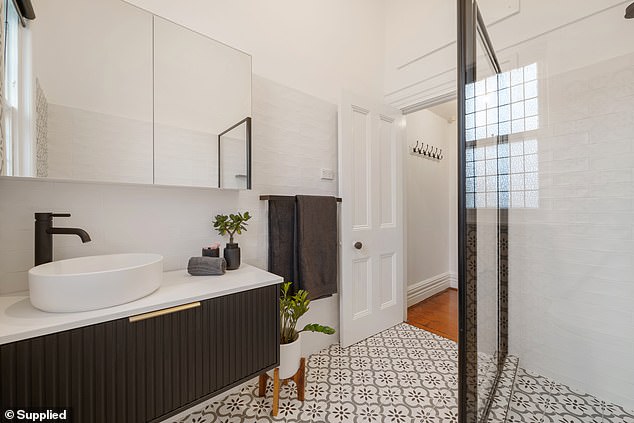 AFTER: Cherie used a technique called direct stick tiling, which is basically a process of sticking new tiles over your existing old tiles

To carry out the budget renovation, Cherie said she first emptied the bathroom and used a plumber and carpenter to remove all fixtures and fittings.

‘It only takes an hour or two to remove the fixtures and fittings, but that obviously costs a bit for labour,’ Cherie said.

Following this, the renovation expert then took a look at the existing tiles with the owners of the property in Dulwich Hill – which were still in good condition – and asked them to consider their options.

‘The owners opted for direct stick tiles,’ she said.

‘Direct stick tiling is basically a process of sticking new tiles over your existing old tiles. If budget allows, it’s better to do your bathroom properly, gut it in total and re-do with new tiles.

‘But if your budget doesn’t allow, direct stick is a quick fix in certain circumstances where your waterproofing is still intact and your tiles are structurally solid on your walls and floors.’ 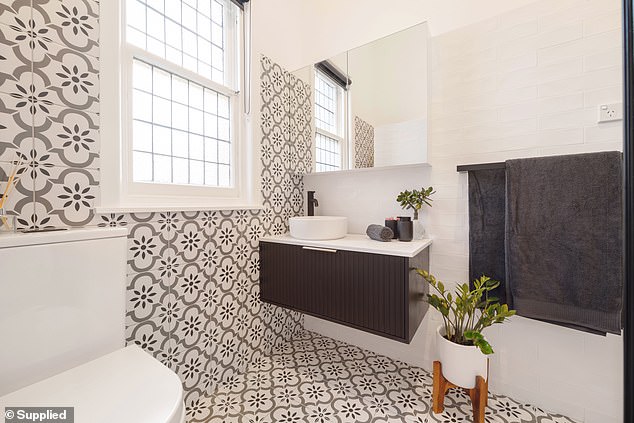 AFTER: She said you need to shop around for three quotes from tradies as they can often vary hugely 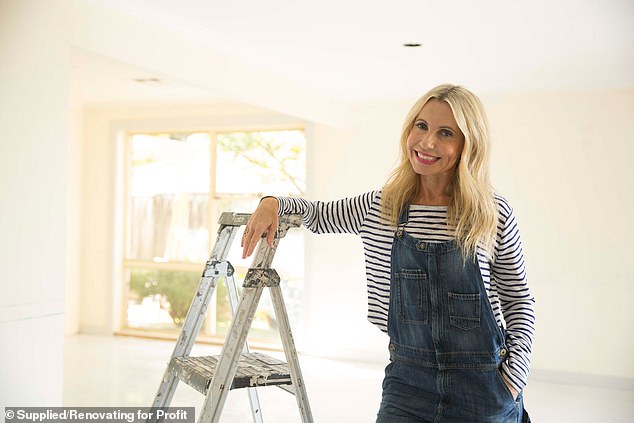 ‘If you want to save money on your bathroom, I recommend you shop around for your fixtures and fittings,’ Cherie (pictured) said

Cherie said if you’re thinking about trying direct stick, then you should find the right tiler.

While some love it, others hate it, and so you need to make sure you have someone who knows what they’re doing and supports the process.

‘Direct stick might sound easy, but it does come with some challenges such as taps fitting correctly on your walls, so it’s not right for everyone’s bathroom,’ Cherie said.

The expert added that it’s worth doing your research in full before you commit. 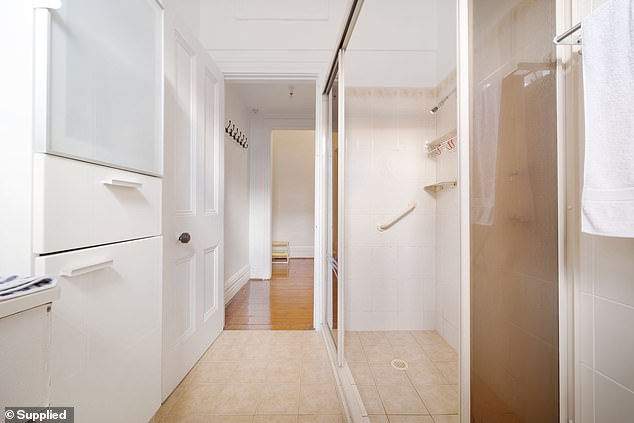 BEFORE: Cherie recommends you think about whether direct stick tiling will work for you before you try it, as it often presents challenges 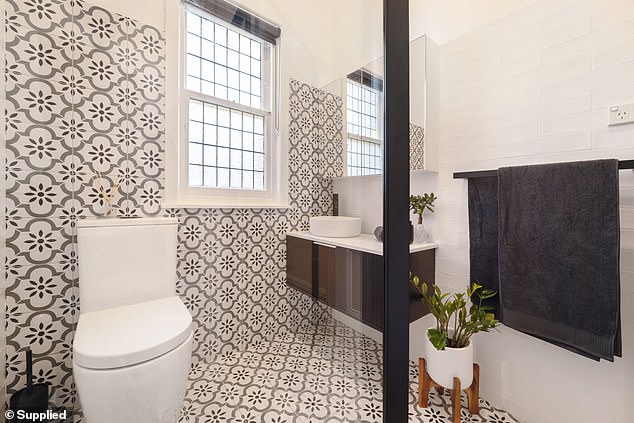 AFTER: Cherie said you can save money by not buying all feature tiles and some plain tiles for a bathroom

What are Cherie’s tips for keeping the costs down?

* Get three quotes for every job as you will often get different quotes from different tradies.

* Only use a feature tile in some areas of the bathroom and go for plain in other areas.

* Shop around for fixtures and fittings.

* Look out for clearance sales and do your research.

Cherie got the direct stick tiles from Beaumont Tiles, and said she only bought some of the feature patterned tiles, and then some plain white ones.

Doing this means the tiles cost less, which is another good option if you’re on a tight budget.

Finally, Cherie brought in new fixtures and fittings – spending around $800 on the shower screen, $2,000 on the tiling and the remaining cash on a new vanity and toilet.

‘If you want to save money on your bathroom, I recommend you shop around for your fixtures and fittings,’ Cherie said.

‘You can often get great deals on specials, like the one I picked up here with the vanity from Cooks Plumbing.’

She also said you can make sure you save money by embracing the ‘power of paint’.

Cherie said you’d be surprised at how much paint can elevate the look and feel of a room, as long as it’s done well and in the right colour.

To find out more about Cherie Barber, please visit her website here.