The number of homes to let is 43 per cent below the five-year average, according to property listing site Zoopla, which has pushed up demand and therefore rents.

The typical rent increased 4.6 per cent year-on-year between July and September 2021, according to the property portal – up from 3 per cent in the previous three months.

It takes 15 days to let a property on average, and the average monthly rent is £968.

The South West of England has seen rents increase the most, rising 9 per cent in a year

Excluding London, where the rental market has been hit by tenants leaving the city during Covid, average UK rental growth reached a 14-year high of 6 per cent in the third quarter.

However, there were signs that renters were returning to the capital.

After 15 months of consecutive falls, London’s rents swung back into positive territory, and increased by 1.6 per cent year-on-year, compared to annual falls of almost 10 per cent at the start of the year.

As well as landlords driving up rents, the increase can also be explained by tenants choosing to move into larger and more expensive homes, Zoopla said.

It said that the desire for more living space during the pandemic was reflected in the rental market as well as among homeowners. 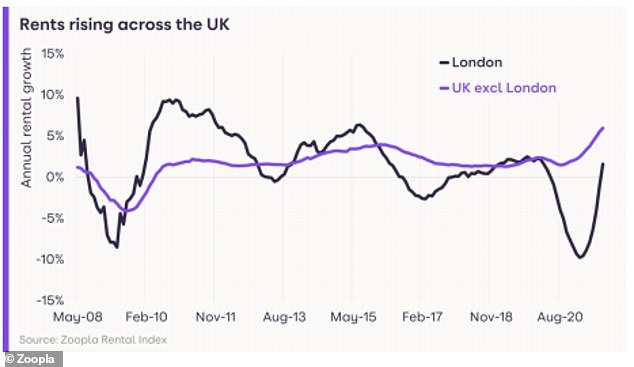 Rents in London lets took a tumble during the pandemic, but they are now on the rise again

Gráinne Gilmore, head of research at Zoopla, said: ‘The swing back of demand into city centres, including London, has underpinned another rise in rents in Q3, especially as the supply of rental property remains tight.

‘Households looking for the flexibility of rental accommodation, especially students and city workers, are back in the market after consecutive lockdowns affected demand levels in major cities.

‘Meanwhile, just as in the sales market, there is still a cohort of renters looking for properties offering more space, or a more rural or coastal location.’

The shortage of rental properties has been caused in part by landlords choosing to leave the buy-to-let market, as a result of higher taxes and stricter regulations in recent years. 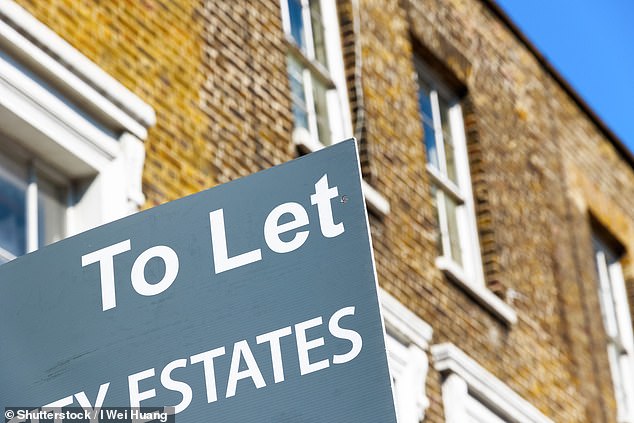 Competition: The number of homes to let is well below the five-year average, according to the property portal Zoopla, and this is leading to more demand and therefore higher rents

How do rents compare to earnings?

UK monthly rents now account for 37 per cent of an average income for a single tenant occupant, which is in line with the five-year average.

According to Zoopla, the regions registering the highest levels of rental growth were among those that are the most affordable and as such, there has been more room for rents to increase.

Rental growth is close to, or at, a 10-year high across most UK regions – except for in London and Scotland. 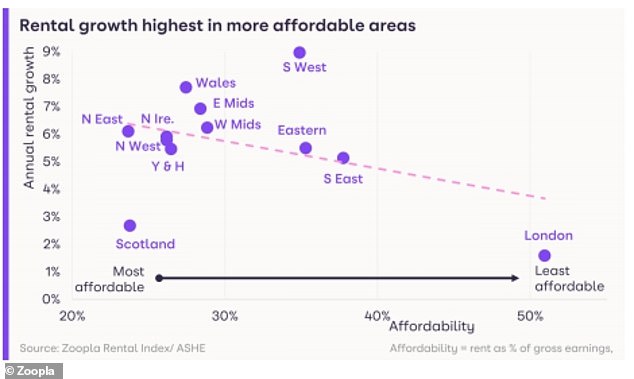 Year-on-year, rents increased the most in the South West of England (9 per cent), followed by Wales (7.7 per cent) and the East Midlands (6.9 per cent).

Rental demand also increased between July and September, as workers returned to offices which translated to an increase in tenants looking for homes.

Demand for lets in the central zones of Manchester, Edinburgh and Leeds has at least doubled over the third quarter of the year compared to the first quarter, according to Zoopla, and in Birmingham demand has increased by 60 per cent – buoyed by the return of office workers and students.

Looking ahead to the new year, Zoopla said rents would continue to increase in 2022, as the shortage of rented homes and the strength of the employment market continued.

‘While the level of rental demand might ease in the near term in line with seasonal trends, demand levels will remain higher than usual, especially in city centres, where there is an element of pent-up demand being released,’ its report said.

Meanwhile, it expected to London rental growth to be 3.5 per cent in 2022, with rents ultimately exceeding pre-pandemic levels.