Police have opened an investigation into the 12-story Miami apartment building collapse that left one dead and 99 missing – as hundreds of rescue crews continue to scour through tons of rubble and desperate families wait for news of any survivors.

Officially, only one woman has been confirmed dead after the Champlain Towers South beachfront building collapsed at about 1.30am on Thursday in Miami’s Surfside neighborhood.

Authorities, however, have warned the death toll could climb sharply given there were 99 people still missing as of Thursday afternoon. It was unclear whether any, or all of them, were inside the building of the collapse.

Horrifying surveillance footage, obtained by WSVN, captured the moment the building collapsed, sending a huge cloud of debris into the air and officials said the level of destruction made it seem like a ‘bomb went off’.

Rescue teams are currently entering the rubble in groups of 10 to 12 at a time with dogs and other equipment as they trawl the wreckage for any survivors. Sources told NBC that search a dog had tracked two potential survivors as of Thursday afternoon.

Hundreds of distraught relatives gathered at a family reunification center holding photos of their loved ones as they awaited news.

As the desperate search for survivors continued, police were already probing the cause of the collapse.

The building side closest to the ocean collapsed in the middle of the night. Rescuers are hoping to find people in air pockets Officials said the building, built in 1981, was going through a recertification process and that engineers had been hired to complete electrical and structural repairs.

Experts who had studied the building as recently as last year said the building was unstable and had been sinking since the 1990s.

Thirty-five people were rescued from the damaged building including a young boy, who was photographed being pulled from the rubble in the early stages of the rescue operation. Two of those people, including the woman who has since died, were taken to hospital.

Authorities say many more people may be dead or remain trapped under the rubble and warned the recovery efforts could last an entire week.

Florida Governor Ron DeSantis had earlier said rescue teams had made contact with some survivors but did not elaborate on where they were located or if they had been rescued.

‘Right now, we have the fire rescue. They are in search and rescue mode. They are trying to identify survivors, I know they have made contact with some, and I know they are doing everything they can to save lives,’ he said.

DeSantis and other authorities said earlier that they were bracing for bad news in terms of survivors given the level of destruction.

‘The building has literally pancaked,’ Surfside Mayor Charles Burkett said. ‘That is heartbreaking because it doesn’t mean to me that we are going to be as successful as we wanted to be in finding people alive.’

Authorities say the building was ‘substantially full’ when it collapsed. Of the building’s 136 apartments, 55 were destroyed.

The tower, which is located one block away from where Jared Kushner and Ivanka Trump currently live, has a mix of seasonal and year-round residents. Mayor Burkett said the building keeps a log of guests staying but does not keep track of when owners are in residence.

Hundreds of people were gathering at a family reunification center set up nearby as they awaited news on their family and friends.

The president of Paraguay’s sister-in-law and her family, as well as a celebrity plastic surgeon from Argentina are among those still missing.

Moreira is the sister of President Mario Abdo Benítez’s wife Silvana. The family owned a condo in the building.

Also missing is a famed Argentinian plastic surgeon, his partner, and their newly-adopted six year-old daughter.

That surgeon – Andres Galfrasconi, 45 – was visiting Miami with his partner Fabian Nunez, 55, and their daughter Sofia, six, to receive their COVID-19 vaccines. 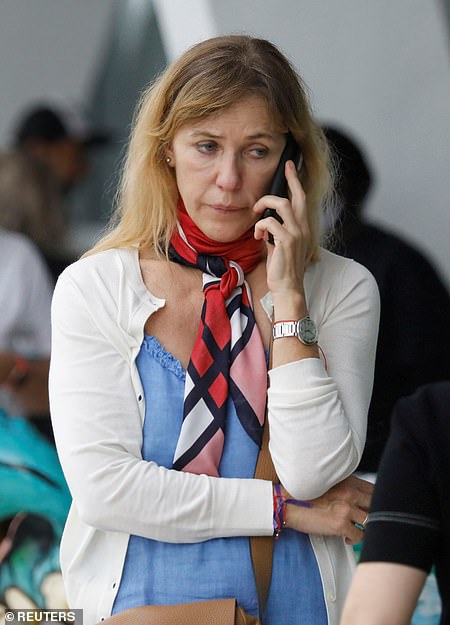 Authorities have not yet determined what caused the building to collapse but confirmed that renovations had been underway on the roof in recent weeks. Burkett said it was unlikely that the roof work had anything to do with the collapse, instead describing it as a ‘catastrophic failure’ of the building.

‘It’s hard to imagine how this could have happened,’ Burkett said. ‘Buildings just don’t fall down… There’s no reason for this building to go down like that unless someone literally pulls the supports out from underneath.’

Burkett suggested that potential causes could be the result of the foundations being washed out or a sinkhole.

The Miami-Dade Police have assumed control of the investigation as to why the building collapsed.

The building been subject to various inspections recently due to the recertification process that has to occur every 40 years.

‘There were garage underground issues related to that, to make sure that it was done soundly,’ Surfside Commissioner Charles Kesl told Local 10. ‘And, to my understanding, there were some cracks from that project – minor cracks – that were just patched up. Nothing, based on my understanding, to the magnitude that would indicate that there was a structural problem that could result in something so catastrophic.’

Shimon Wdowinski, a professor in the Department of Earth and Environment at Florida International University, told USA Today that he studied the building last year as part of a report on how buildings in Miami were sinking generally with rising sea levels.

Wdowinski said in his study that the building had been sinking since the 1990s.

He said on Thursday he knew instantly which building had collapsed when he heard news reports of it.

‘I looked at it this morning and said ‘Oh my god’. We did detect that,’ he said.

The collapse, which appeared to affect one leg of the L-shaped tower, tore away walls and left a number of homes in the still-standing part of the building exposed in what looked like a giant dollhouse.

Bunk beds, tables and chairs could be seen still left inside the damaged apartments. Air conditioner units were hanging from some parts of the building where wires now dangled. 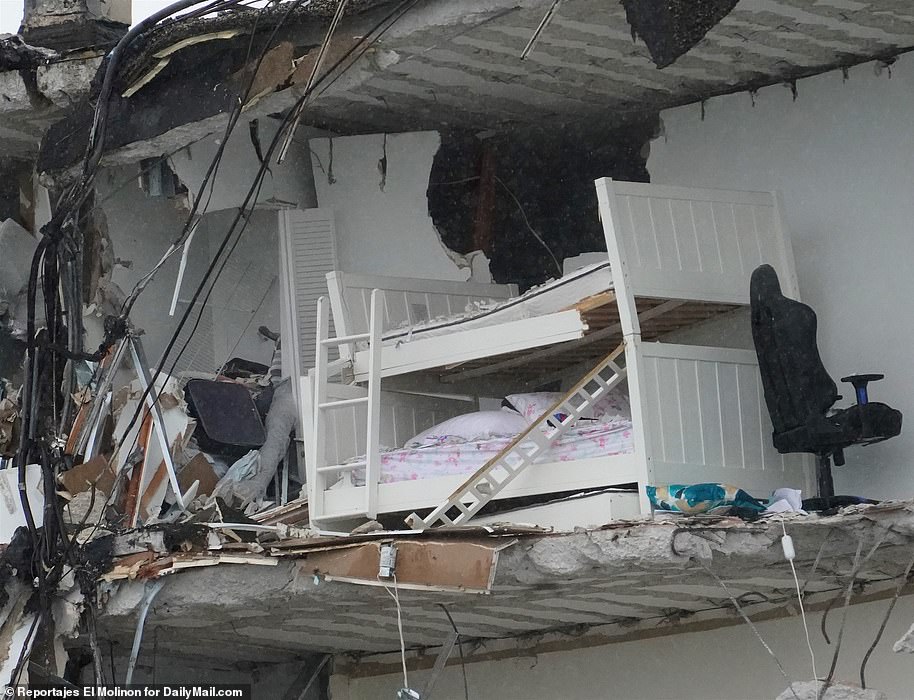 Bunk beds, tables and chairs could be seen still left inside the damaged apartments. Air conditioner units were hanging from some parts of the building where wires now dangled 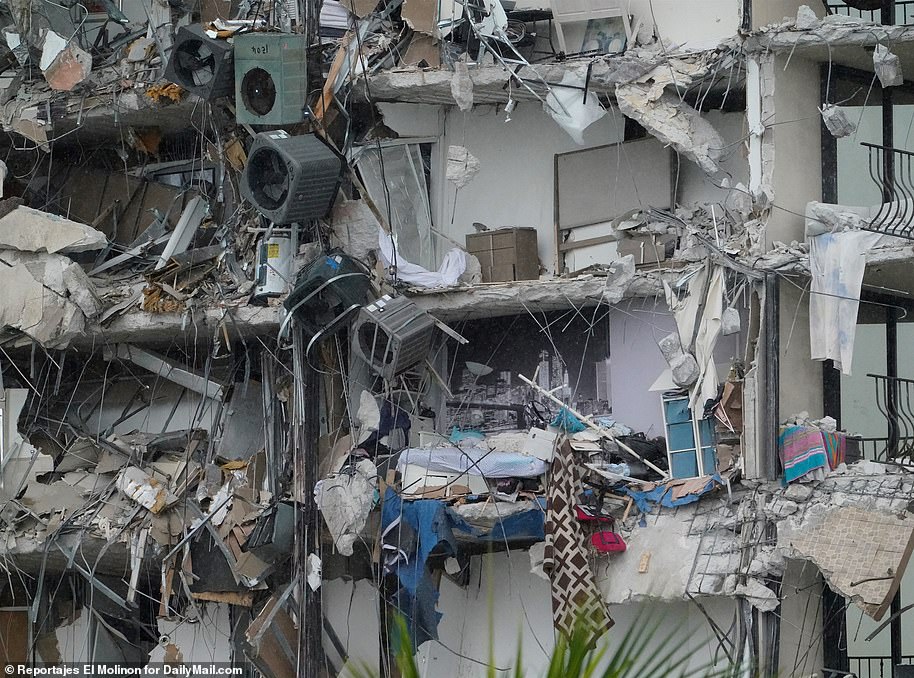 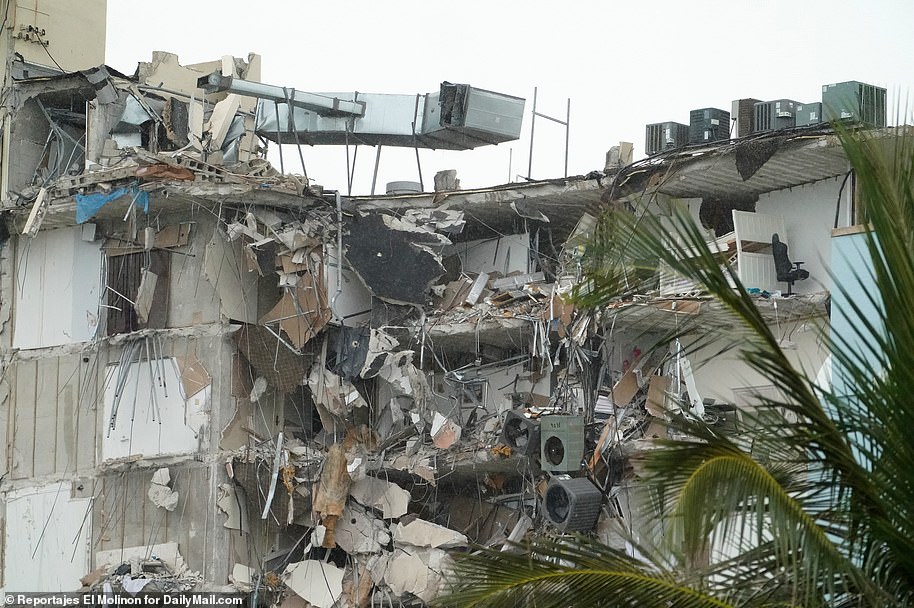 Photos and video from the scene show the collapse affected half the tower. Piles of rubble and debris surrounded the area just outside the building.

The debris from the collapse coated cars up to two blocks away with a light layer of dust.

Barry Cohen, 63, said he and his wife were asleep in the building when he first heard what he thought was a crack of lightning.

The couple went onto their balcony, then opened the door to the building’s hallway to find ‘a pile of rubble and dust and smoke billowing around’.

‘I couldn´t walk out past my doorway,’ said Cohen, the former vice mayor of Surfside. ‘A gaping hole of rubble.’

He and his wife eventually made it to the basement and found rising water there. They returned upstairs, screamed for help and were eventually brought to safety by firefighters using a cherry-picker.

Cohen said he raised concerns years ago about whether nearby construction might be causing damage to the building after seeing cracked pavers on the pool deck.

Jennifer Carr was asleep in a neighboring building when she was awakened by a loud boom and her room shook. She thought it was a thunderstorm but checked the weather app on her phone and saw none. The building´s fire alarms went off, and she and her family went outside and saw the collapse.

‘It was devastation,’ Carr said. ‘People were running and screaming.’

Nicolas Fernandez was waiting early Thursday for word on close family friends who lived in the collapsed section of the building.

‘Since it happened, I´ve been calling them nonstop, just trying to ring their cellphones as much as we can to hep the rescue to see if they can hear the cellphones.’ 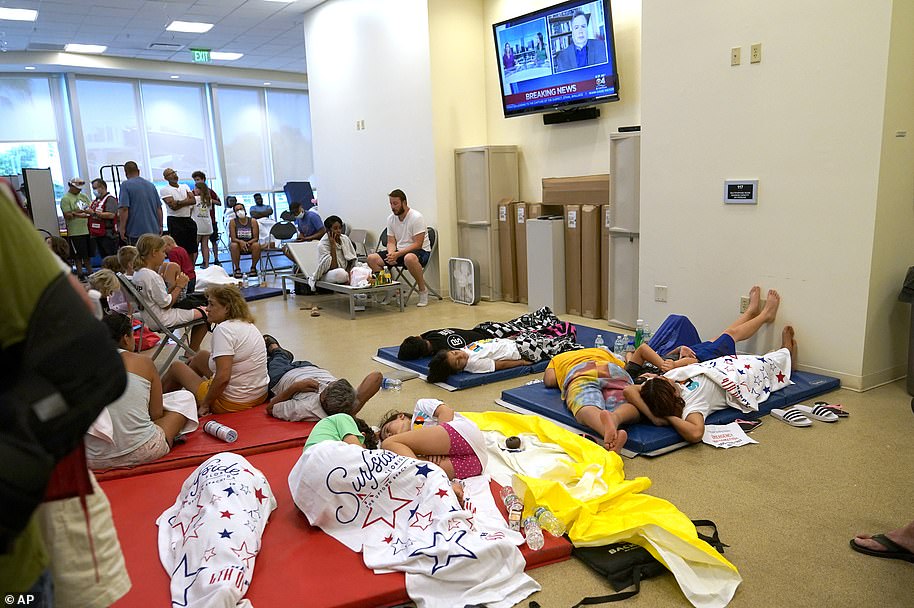 Authorities say the building was ‘substantially full’ when it collapsed. Of the building’s 136 apartments, 55 were destroyed. Families are pictured at a family reunification center on Thursday morning

Santo Mejil, 50, told the Miami Herald his wife called him from the building, where she was working as an aide for an elderly woman.

‘She said she heard a big explosion. It felt like an earthquake,’ Mejil told the newspaper. He said she later called him and said rescuers were bringing her down.

One witness, who was staying in the south Florida island city with his family, was in a neighboring building at the time and said the collapse sounded and felt like a tornado or earthquake.

‘It was the craziest thing I ever heard in my life,’ he told Fox News.

Witnesses claimed to have heard people screaming beneath the rubble during frantic efforts to free them from the wreckage of the building.

One witness told NBC: ‘They are able to rescue some people but I heard some screams.’

When the building initially collapsed, more than 80 rescue units were on the scene, including designated teams skilled in retrieving bodies from wreckages. 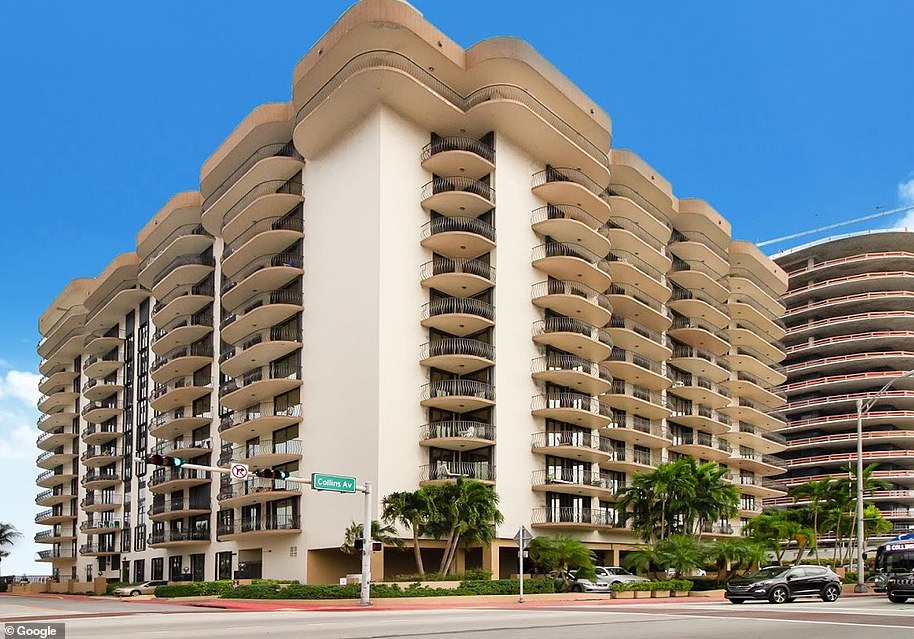 The building, a twelve-story apartment block called Champlain Towers South (pictured), collapsed in the early hours of this morning.

The sea-view condo development was built in 1981 in the southeast corner of Surfside, on the beach. It had a few two-bedroom units currently on the market, with asking prices of $600,000 to $700,000.

The area is a mix of new and old apartments, houses, condominiums and hotels, with restaurants and stores serving an international combination of residents and tourists.

The community provides a stark contrast from bustle and glitz of South Beach with a slower paced neighborhood feel.