Rep. Glenn Grothman, a Wisconsin Republican, promoted the work of an anti-vaxxer conspiracy theorist during a Congressional hearing on COVID-19 vaccine development earlier this month.

Grothman, as first reported by the Popular Information newsletter, asked Congressional witnesses if Judy Mikovits would be a good voice to bring to Capitol Hill.

Mikovits is the woman featured in the ‘Plandemic’ video that YouTube, Facebook and Vimeo all banned because it spread so much misinformation, including a charge that Dr. Anthony Fauci buried her research about how vaccines damage people’s immune systems, thus making them more susceptible to the coronavirus.

Rep. Glenn Grothman, a Wisconsin Republican, asked medical experts if they thought testimony from someone like Judy Mikovits, a prominent conspiracy theorist 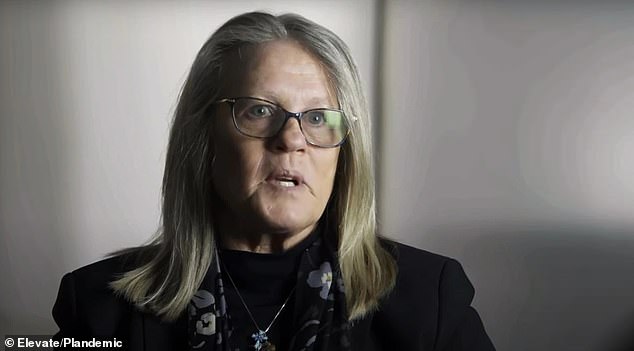 Judy Mikovits appeared in the controversial ‘Plandemic’ video where she pushes conspiracy theories about the coronavirus and Dr. Anthony Fauci. The video has been banned on major platforms because of the misinformation it was spreading

Mikovits also made the claim that mask-wearing will ‘activate’ the virus.

‘Right now somebody gave me a book “Plague of Corruption” by Judy Mikovits, who is very – sometimes very pro-vaccine, sometimes jaded about vaccines and you know we’ve got five people I think on the panel today and nobody is particularly jaded to the degree which she is,’ Grothman began.

Grothman asked the panel of witnesses, which included the former head of the National Vaccine Program at HHS, along with medical experts from Yale, Stanford, Georgetown and John Hopkins if her input would be valuable.

‘Could somebody comment on her or do you think it would be good to have somebody on a panel like this who maybe thinks we are a little bit over-vaccinated in America and isn’t going to be so hung-ho vaccine, everybody?’ Grothman asked.

‘A lot of, I think, intelligent people who read a lot are sometimes a little jaded on the vaccine thing,’ the Congressman also offered.

His inquiry, which was made over Zoom, was first met with silence.

Dr. Jay Bhattacharya, a professor of medicine at Stanford, then spoke and replied, ‘I don’t know her, in particular.’

‘But I think that putting the best data out there and having transparency to all what those data are so we understand what the decision is being based on and then we can have a public debate about it,’ Bhattacharya suggested.

Grothman then offered, ‘A lot of, I think, intelligent people who read a lot are sometimes a little jaded on the vaccine thing.’

He suggested that he was uneasy with the panel being so ‘go, go, go, go, go’ on a COVID-19 vaccine.

Dr. Bruce Gellin of the Sabin Vaccine Institute, who previously ran HHS’ National Vaccine Program, then stepped in and explained to Grothman that ‘there are legitimate concerns’ about COVID-19 vaccine safety, which is what researchers are working on now.

‘On this panel we have been quite clear that everything be done to ensure those things,’ Gellin said.

He didn’t mention Mikovits by name, but said he understood the congressman’s concerns.

‘Watching science in real time can be confusing,’ Gellin said.