Taking down statues of Confederate figures is ‘just like’ removing a monument to victims of the 9/11 attacks, Maine Gov. Paul LePage said Thursday, adding that the white nationalist and far-left protesters in Charlottesville over the weekend were ‘equally as bad’ and ‘disgusting.’

The Republican governor made the comments during an appearance on WGAN-AM when asked for his reaction to the deadly violence in Virginia at a white nationalist protest over the removal of a statue of Confederate Gen. Robert E. Lee.

LePage, echoing President Donald Trump, said he condemns ‘both sides’ that went to the city with the intent of inciting violence.

He lamented the deaths of 32-year-old Heather Heyer, who was struck by a car that drove into the crowd of protesters, and two state police officers, whose helicopter crashed during an effort to contain the violence.

Backing for Trump: LePagecompared left-wing protesters who want to remove Confederate statues to ‘the Taliban in Afghanistan’ in their desire to remove monuments. 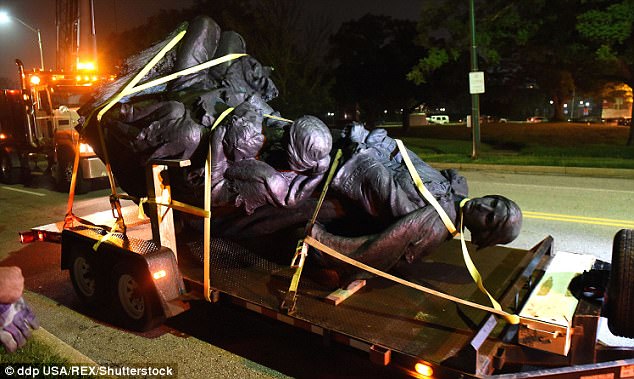 Removal: In Baltimore, MD, a monument dedicated to the Confederate Women of Maryland was among those removed under cover of darkness early Wednesday. Gov LePage said the country risked forgetting its history 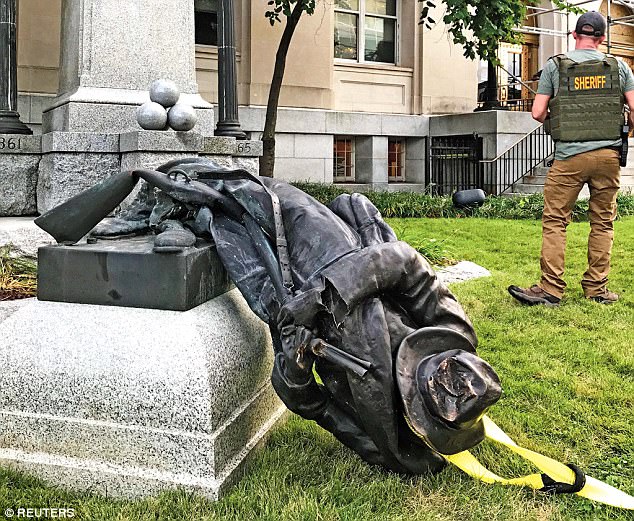 Vandalized: In Durham, N.C., protesters dragged a statue of a Confederate soldier to the ground. Law enforcement are pursuing the activists and have made one arrests

LePage said left-wing protesters who want to remove Confederate statues are ignorant of history and want to erase it. He compared them to ‘the Taliban in Afghanistan’ in their desire to remove monuments.

‘How can future generations learn if we’re going to erase history? That’s disgusting,’ he said. ‘They should study their history – they don’t even know the history of this country and they are trying to take monuments down. Listen, whether we like it or not, this is what our history is.’

He continued: ‘To me, it’s just like going to New York City right now and taking down the monument of those who perished in 9/11. It will come to that.’

LePage also said he didn’t find out about the Charlottesville violence until Tuesday because he doesn’t watch TV or read newspapers. The governor, who has a long history of feuding with the media, said he thinks newspapers are ‘pencil terrorists.’

Republican U.S. Sen. Susan Collins said Thursday that it’s ‘very difficult to think how anyone would not be aware of these events given the extensive coverage and discussion that people are having about them.’

Collins, whom LePage called ‘downright dangerous’ over her vote to oppose the repeal of the Affordable Care Act, added that Maine has its own problems with racial intolerance, including the reported discovery of Ku Klux Klan flyers in Boothbay Harbor this week, and that the governor should focus on those. 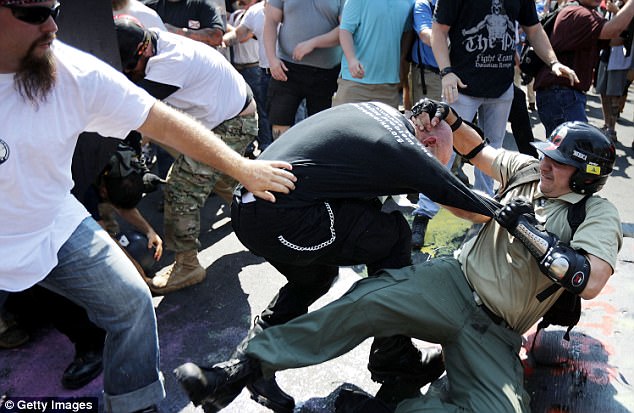 Trump, for whom LePage campaigned last year, also voiced criticism of the movement to remove Confederate monuments on Thursday. He said the nation is witnessing ‘the history and culture of our great country being ripped apart.’

The comments from LePage and Trump drew immediate condemnation from Maine Democrats. Maine Democratic Party Chairman Phil Bartlett said both men are doubling down on a ‘shameful and embarrassing’ perspective. He called LePage’s comments about Charlottesville ‘unhinged’ and ‘ill informed.’

Diane Russell, a Democratic former state representative who is running for governor, tweeted that it was hypocritical for LePage to argue in favor of preserving history when he once ordered the removal of a labor mural from the Maine Department of Labor in Augusta.

LePage said the mural, which now hangs in the Maine State Museum, was too sympathetic to unions. He is prevented by term limit laws from running for re-election in 2018.

Former Maine Gov. John Baldacci, a Democrat, also appeared on WGAN on Thursday morning to address the Charlottesville violence. He said that Trump’s role as president is to ‘comfort the country’ and that the president’s comments were ‘tone deaf.’ Baldacci didn’t directly address LePage’s comments.