Pro-Trump Republican running against Ilhan Omar is permanently suspended from Twitter for saying her rival ‘should be tried for treason and hanged’ – and says her removal proves the site ‘sides with terrorists, traitors, pedophiles and rapists’

A Republican congressional candidate has been suspended from Twitter after posting lynching threats to her rival Democratic Representative Ilhan Omar.

Danielle Stella, 31, who describes herself online as a mother and a special education teacher, posted at least two tweets that violated the social media website’s rules.

In one tweet the the Republican posted: ‘If it is proven @IlhanMN passed sensitive info to Iran, she should be tried for #treason and hanged.’

Another post was a retweet of a story about her offensive post in which she added a picture of a stick figure hanging from scaffolding. 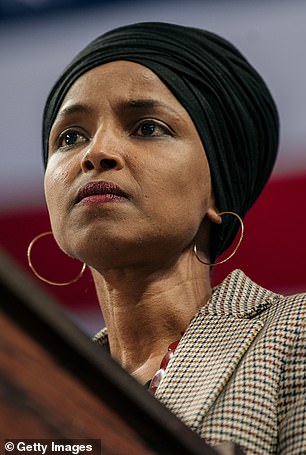 Danielle Stella, 31, was suspended from Twitter after she reportedly tweeted about Ilhan Omar: ‘If it is proven @IlhanMN passed sensitive info to Iran, she should be tried for #treason and hanged’

On Wednesday her campaign profile and personal account showed messages saying they had been suspended. Twitter said it had permanently suspended her account for repeated violations of their rules

Both tweets have since been removed.

Stella’s campaign micro-blogging site bio notes she is a ‘Republican Candidate against Ilhan Omar’, ‘pro-life’, for ‘freedom of speech’ and a ‘Veterans Volunteer’.

Another account belonging to Stella also appeared to be suspended. On that profile she had retweeted many of the posts from her @2020MNcongress one.

In a description on her personal account, Stella says she is conservative and loves god, science and #MAGA.

Both accounts showed an ‘account suspended’ message in place of the content that had been uploaded since September 2009 on her personal account and May 2019 for the 5th District campaign. 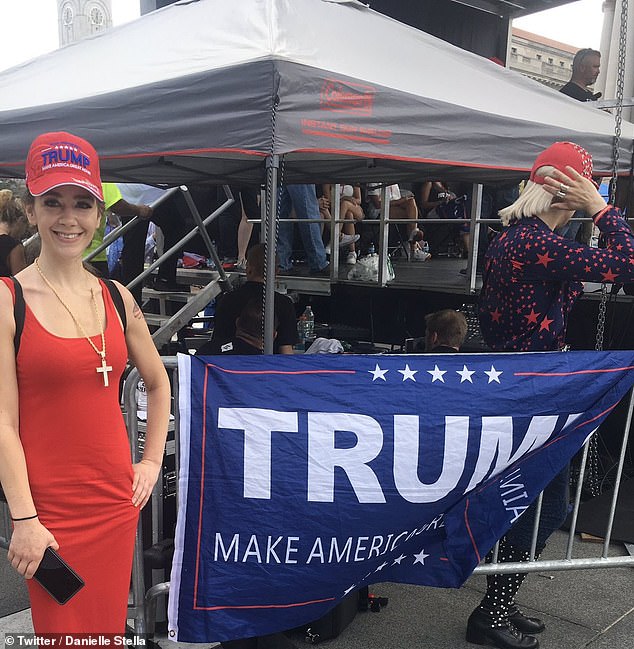 In a description on her personal account, Stella says she is conservative and loves god, science and #MAGA

‘My suspension for advocating for the enforcement of federal code proves Twitter will always side with and fight to protect terrorists, traitors, pedophiles and rapists,’ she told the Washington Times Wednesday.

Her tweets came after Kuwaiti-born Alan Bender claimed in a lawsuit filed in Florida in October that Qatar ‘recruited Ilhan Omar from even way before she thought about becoming a government official’ and ‘groomed her’. 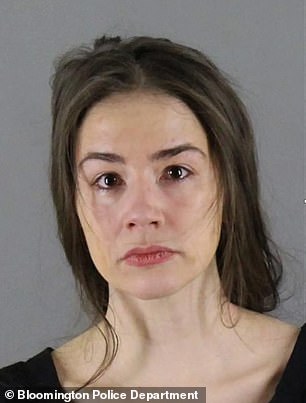 Stella was arrested in July for allegedly stealing from Target

In the case against the Emir of Qatar’s brother, Bender said in a deposition that Omar received cash payments. She has denied the allegations, calling them absurd.

Stella has previously said that if she is elected to Congress, she will work towards reducing crime rates.

Stella has also tweeted in the past that U.S. representatives who fail to uphold the law should be made to leave office.

Stella is reportedly a supporter of the QAnon conspiracy theory, which claims that high-profile Democrats are involved in a pedophile ring that President Trump is trying to dismantle.

She has repeatedly used the hashtag #WWG1WGA on Twitter, which is a reference to QAnon’s motto: ‘Where we go one, we go all.’

In July, she was accused of shoplifting 279 items from a suburban Target earlier this year.

A criminal complaint says Danielle Stella stole items valued at more than $2,000 from Target in January. She allegedly told police she doesn’t remember anything after arriving at Target, due to post-traumatic stress disorder.

The Star Tribune reports Stella was arrested again in April after allegedly stealing $40 in cat food from a Cub grocery store. A police report says she told an officer she forgot to pay.

In a text to The Guardian, Stella said she’s innocent until proven guilty, and if she were guilty, she’d never run for public office.