A bipartisan group of senators on Wednesday ignored a plea from President Donald Trump and voted to advance a war powers resolution that would hamper his ability to take military action in Iran.

Trump implored lawmakers not to pass the measure at is would ‘show weaKness’ and let Iran ‘have a field day.’

‘Don’t let it happen!,’ the president wrote on Twitter.

The Senate, however, voted to move the resolution forward with a final vote expected on Thursday.

Eight Republicans senators defected to vote for the measure – a sign that it will pass when the chamber takes its final vote. They were Mike Lee of Utah, Lisa Murkowski of Alaska, Todd Young of Indiana, Lamar Alexander of Tennessee, Susan Collins of Maine, Bill Cassidy of Louisiana, Jerry Moran of Kansas, and Rand Paul of Tennessee.

Trump took to Twitter before Wednesday’s procedural vote to make his appeal.

‘It is very important for our Country’s SECURITY that the United States Senate not vote for the Iran War Powers Resolution. We are doing very well with Iran and this is not the time to show weakness. Americans overwhelmingly support our attack on terrorist Soleimani. If my hands were tied, Iran would have a field day. Sends a very bad signal. The Democrats are only doing this as an attempt to embarrass the Republican Party. Don’t let it happen!,’ the president wrote.

The resolution would require Trump to end all hostilities regarding Iran within 30 days unless he gets explicit approval from Congress.

Lawmakers in both parties pushed for the resolution after Trump ordered the killing of top Iranian general Qassem Soleimani without informing Congress.

The House has passed a similar measure but would need to pass the Senate version in order to get a resolution to the president’s desk for his signature.

The Senate resolution, sponsored by Democratic Sen. Tim Kaine of Virginia, came after Trump sent members of his Cabinet to Capitol Hill to brief senators on the killing of Soleimani.

The briefing went so badly that Republican Senators Rand Paul and Mike Lee came out of it vowing to vote for Kaine’s resolution.

‘The worst briefing I’ve seen — at least on a military issue — in the nine years I’ve served’ in the Senate, Lee said after the briefing.

Lee and Paul exited the January briefing – which was conducted by Secretary of State Mike Pompeo, Defense Secretary Mark Esper, Joint Chiefs of Staff Chairman Mark Milley, acting Director of National Intelligence Joseph Maguire, and CIA Director Gina Haspel – and went straight to the television cameras to rail about what they heard.

Lee did not mince words about his feelings on how the Trump officials treated him in the briefing.

‘They had to leave after 75 minutes while in they’re in the process of telling us we need to be good little boys and girls and not debate this in public. I find that absolutely insane,’ Lee said.

‘One of the messages we received from the briefers was do not debate, do not discuss the issue of the appropriateness of further military intervention against Iran, and if you do, you’ll be emboldening Iran,’ Lee added. ‘I find this insulting and demeaning.’ 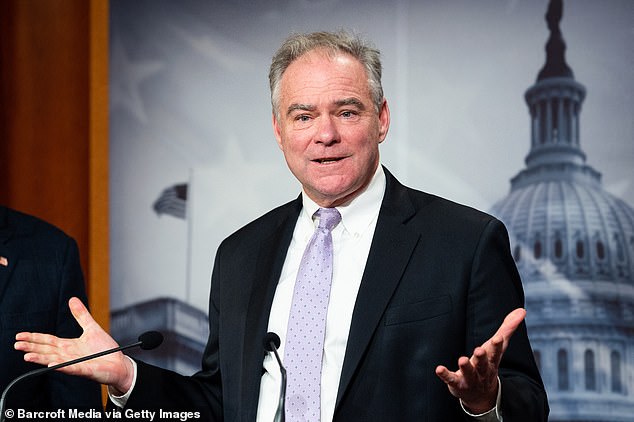 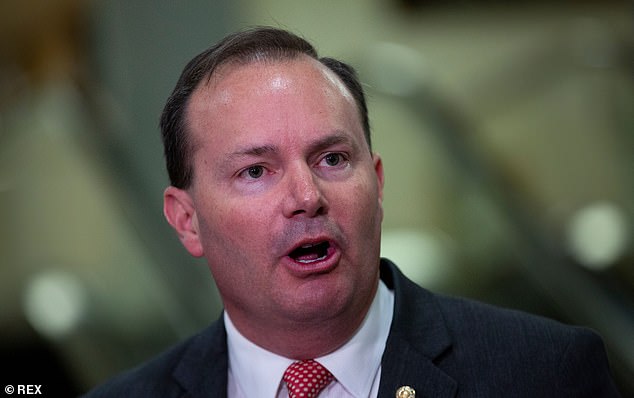 Sen. Mike Lee was upset after a briefing on the killing of Iranian General Qassem Soleimani 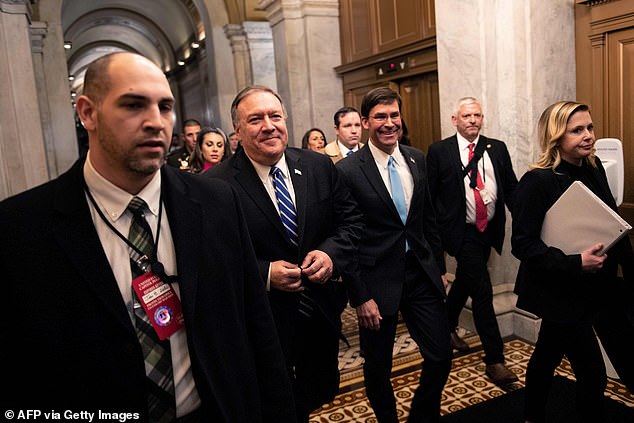 It is not acceptable for executive branch to tell us ‘we can’t debate the appropriateness of military intervention in Iran. It’s unAmerican, it’s unconstitutional and it’s wrong,’ the senator from Utah noted.

Three other Republican senators – Jerry Moran of Kansas, Susan Collins of Maine, and Todd Young of Indiana – have said they will vote for Kaine’s resolution.

That gives Democrats the numbers they need for passage, which is just a simple majority of senators.

‘We should not be at war with Iran unless Congress votes to authorize such a war,’ Kaine said Wednesday. ‘While the President does and must always have the ability to defend the United States from imminent attack, the executive power to initiate war stops there. An offensive war requires a congressional debate and vote. This should not be a controversial proposition.’

‘This is not directed toward President Trump, it would apply equally to any President,’ Kaine said. ‘It’s fundamentally about Congress owning up to and taking responsibility for the most significant decision that we should ever have to make.’

Kaine removed any specific reference to President Trump and made it a broader defense of Congress’ role in declaring war in order to gain Republican support.