Republicans DON’T have the votes for Kavanaugh

Senate Republicans don’t have the votes to confirm Brett Kavanaugh to the Supreme Court with some senators claiming there are more lawmakers harboring doubts than being publicly said but GOP leader Mitch McConnell is projecting confidence.

Republicans hold a 51-seat majority, meaning they can only lose one senator, if all Democrats vote no on Kavanaugh. 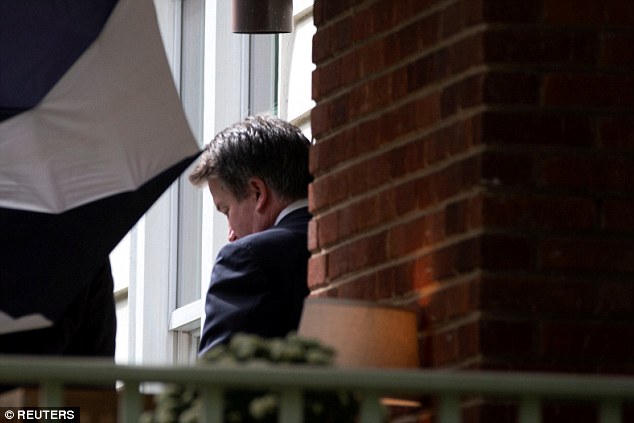 And several Republican senators are closely watching how the allegations against Kavanaugh play out.

Republican Senators Bob Corker of Tennessee, Susan Collins of Maine, Jeff Flake of Arizona and Lisa Murkowski of Alaska are considered the votes to watch.

But Corker says there are more doubting lawmakers out there.

‘I know the media keeps characterizing three or four people, but I feel like it’s a large number of them that want to see firsthand the accusation and the rebuttal, and again, will be looking at it in a very sober way,’ he told NBC News. ‘So I think it’s much larger than you think.’

Sen. Jon Kyl, who was appointed this month to replace the late Sen. John McCain, was Kavanaugh’s guide through the confirmation process.

He supports Kavanaugh but acknowledged some senators are struggling.

‘I don’t doubt this accusation complicates the equation for folks considering his nomination,’ Kyl said.

That adds to the pressure on Kavanaugh on Thursday when he testifies before the Senate Judiciary Committee. Not only will the eyes of the world be watching how he handles the allegations against him, so will the lawmakers who decide his fate.

Flake is on that committee. Corker, Murkowski and Collins are not but have all said they’ve cleared their calendars to watch it.

Christine Blasey Ford will also testify on her allegation against Kavanaugh.

Republican leadership has been closely watching the four for signs of what they might do.

Flake, Collins and Corker have been some of the most vocal in saying they want Ford to be heard. 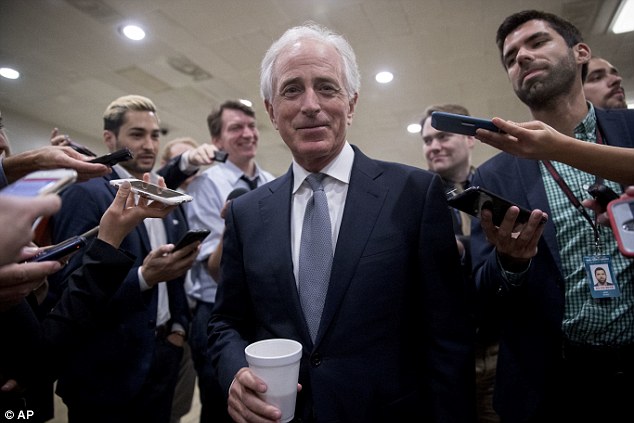 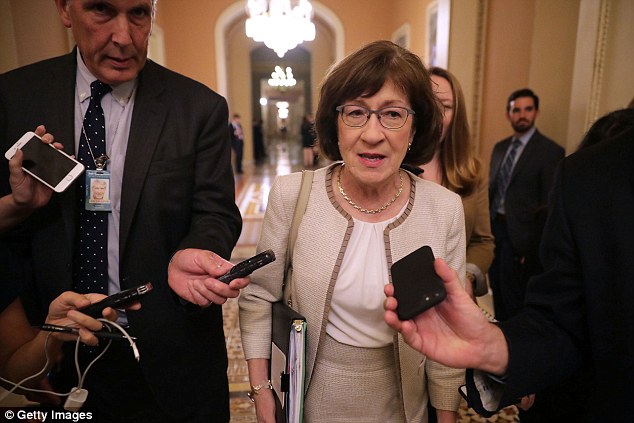 Sen. Susan Collins has met with McConnell about her concerns

Collins told that directly to McConnell.

And after Murkowski told reporters Tuesday morning an FBI investigation into Kavanaugh would ‘sure clear up all the questions,’ she had a 30-minute meeting in McConnell’s office.

Flake is the most worrisome. He is retiring after this year and has no qualms about going against the president, whose political threats against him played a part in his decision to retire.

He took to the Senate floor Wednesday afternoon and said lawmakers must have open minds.

‘I do not believe that a claim of sexual assault is invalid because a 15-year-old girl didn’t promptly report the assault to the authorities, as the President of the United States said just two days ago,’ he said.

‘We have to have open minds. We must listen. We must do our best to seek to the truth in good faith. That is our only duty,’ he noted.

‘My colleagues, winning at all costs is too high a cost,’ he said.

McConnell is pressuring GOP senators to toe the line even taking to the Senate floor  to complain of a ‘smear campaign’ against Kavanaugh.

Adding to the pressure points, McConnell told his senators they should expect to work through the weekend to move toward a confirmation vote on Kavanaugh.

That line could work on Collins, who is up for reelection in 2020 and could face a primary challenger.

It’s less of a problem for Murkowski, who’s also up for reelection in 2020 but her state has a large independent vote population and Murkowski won her last race running as an write-in candidate after she lost the GOP primary. She had no help from the party in that contest and prevailed in a race where voters had to write in her name – and spell it correctly. 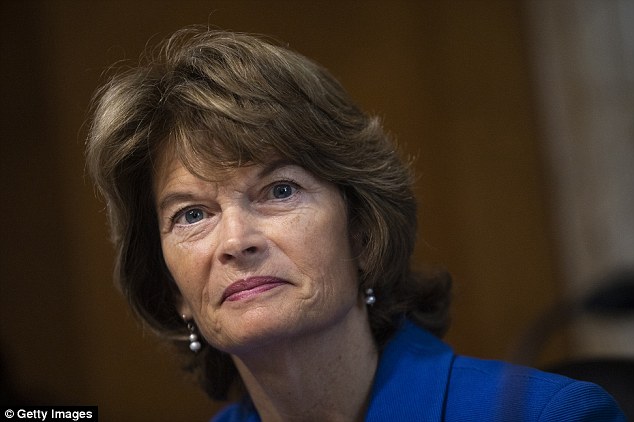 Sen. Lisa Murkowski is one to watch 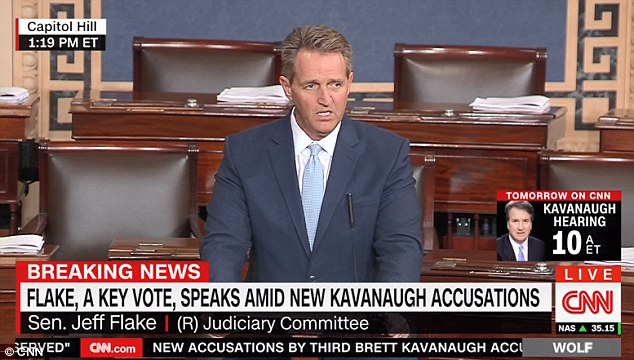 Sen. Jeff Flake is the most worrisome for the GOP

Julie Swetnick, his new accuser, released a sworn statement through her attorney Michael Avenatti saying that Kavanaugh and his friend Mark Judge were there as she was abused by a ‘train’ of teenage boys.

She said she was drugged ‘using Quaaludes or something similar’ which had been put in her drink – and that Kavanaugh and his friends would spike ‘punch’ at parties with grain alcohol or drugs to ’cause girls to lose inhibitions and their ability to say ‘No’.’

‘This is ridiculous and from the Twilight Zone. I don’t know who this is and this never happened,’ Kavanaugh said in a statement released by the White House.

Judge was the teenage boy Christine Blasey Ford charged with being in the room when Kavanaugh sexually assaulted her at a high school party in the 1980s.

Kavanaugh also has denied her charge and a second allegation from Debra Ramirez, who claims the Supreme Court nominee exposed himself and thrust his penis in her face, forcing her to touch it when she pushed him away at a college party when they were at Yale.

Trump is sticking by his nominee and said Senate Republicans should have pushed through his confirmation two weeks ago so people wouldn’t be talking about the sexual allegations against him right now.

‘They could’ve pushed it through two-and-a-half weeks ago, and you wouldn’t be talking about it right now, which is frankly what I would’ve preferred, but they didn’t do that,’ the president said at the United Nations in New York on Wednesday.

That time frame would have Kavanaugh on the Supreme Court before the allegations against him came to light.