It could be a while until Americans see more economic relief in the wake of the coronavirus pandemic as Democrats and Republicans have reached a deadlock in negotiations regarding the fourth stimulus package.

Treasury Secretary Steven Mnuchin said Sunday morning that Republicans are not willing to concede to the high price tag Democrats want on the legislation.

‘That’s something we’re not going to do,’ Mnuchin told ABC News This Week when asked about the $1 trillion in aid Democrats are demanding for state and local governments and the $3 trillion bill.

The Republican proposal laid out by Senate Majority Leader Mitch McConnell on Monday had a total cost of $1 trillion, which some Republicans claim is already too high a price for yet another round of relief in less than five months.

‘We have to balance,’ Mnuchin continued. ‘There’s obviously a need to support workers, support the economy.’

‘On the other hand,’ he said, ‘we have to be careful about not piling on enormous amounts of debt.’

In a sign of a continuing partisan stalemate over another relief bill, House Speaker Nancy Pelosi could not give a timeline on Sunday.

‘The fact is we will be close to an agreement when we have an agreement,’ she told ABC’s Martha Raddatz. 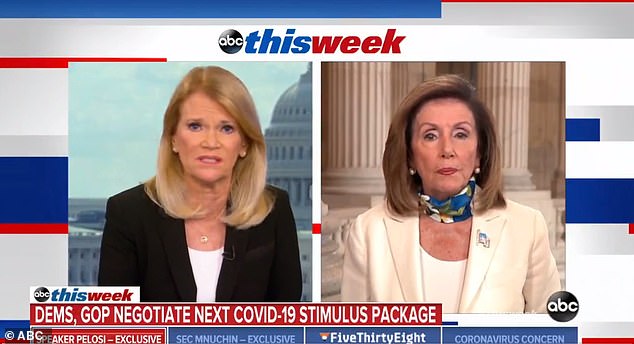 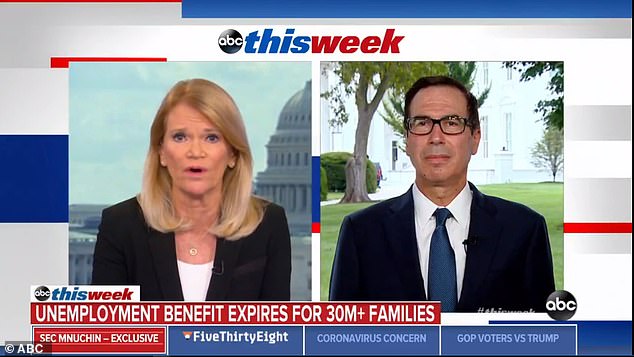 ‘We proposed a one-week extension at $600, so that while we negotiate a longer term solution at least all those people don’t lose their money,’ Mnuchin said. ‘And I’m surprised that the Democrats won’t agree to that’

‘The fact is, they put on the floor at the end of this week in the Senate $200,’ she lamented of the GOP proposal of a cut from the unemployment boost of $600-per-week in bolstered benefits to $200.

‘We are unified in our support for $600,’ Pelosi asserted of the Democratic Party.

Mnuchin, whose interview with ABC News followed Pelosi’s, said he was ‘surprised’ by her comments.

The Treasury secretary has been the liaison between the White House and Congress, specifically with Democrats, as negotiations commenced in March for a slew of packages to provide relief to Americans and stimulus to the economy in the midst of the pandemic.

‘The president is very concerned about the expiration of the unemployment’s insurance,’ Mnuchin assured.

‘We proposed a one-week extension at $600, so that while we negotiate a longer term solution at least all those people don’t lose their money,’ he added. ‘And I’m surprised that the Democrats won’t agree to that. They are insistent on having this as part of a larger deal.’ 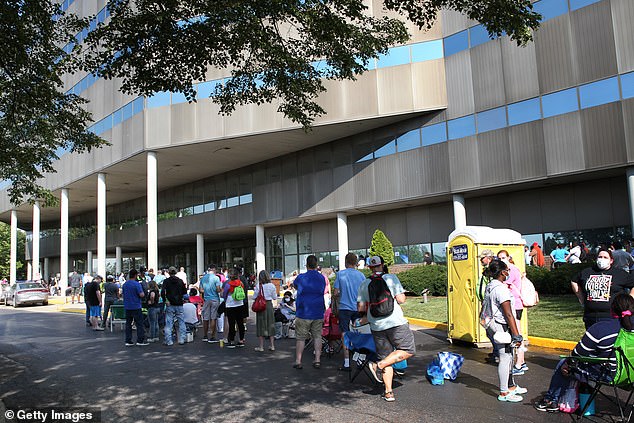 Unemployment benefits were boosted to $600 extra per week as millions of Americans find themselves jobless in the midst of the pandemic, but Republicans are proposing that measure be decreased to $200 per week in the next bill

The unemployment boost, passed as part of a previous relief bill, expired Friday as lawmakers scrambled to reach a deal on extending or amending the enhanced benefits.

Democrats want to keep the $600 benefits as the virus prevails, but the Republican proposal on Monday detailed a temporary decrease to $200-per-week until that was phased out and replaced with a cap of 70 per cent of the individual’s pre-coronavirus wages.

The pandemic has left millions without jobs as Americans have been either temporarily or permanently laid off, had their hours cut or were furloughed.

Republicans have lamented that the high rate of enhanced unemployment has incentivized the newly jobless to remain out of work and continue collecting checks.

Mnuchin and Trump’s Chief of Staff Mark Meadows, who have spent the last week negotiating with lawmakers, met with Democrats again on Saturday.

‘It was a productive discussion,’ Schumer told reporters at the Capitol Saturday. ‘Now each side knows where, where they’re at. And we are going to work very hard to come to an agreement.’

‘Today’s meeting was more productive than our previous discussions, but no agreement can be reached yet,’ Pelosi wrote.

‘Work will continue on a staff level tomorrow,’ the California Democrat continued.

Schumer and Pelosi will meet with Mnuchin and Meadows again on Monday.