Members of Congress from both sides called for a review of Britain’s access to U.S. intelligence in the wake of the decision, a dramatic move which could blow up the U.S.’s most significant eavesdropping alliance.

Republican national security hawks called the decision ‘wrong, dangerous and short-sighted’ after the UK defied months of pressure from Donald Trump and his senior aides and announced Huawei would be allowed to be part of British 5G – and a Democratic congressman backed them.

Tom Cotton, the junior Oklahoma senator, demanded a ‘review’ of intelligence-sharing with the UK, ‘The short-term savings aren’t worth the long-term costs. In light of this decision, the U.S. Director of National Intelligence should conduct a thorough review of U.S.-UK intelligence-sharing,’ the hawkish Republican wrote on Twitter.

‘Allowing Huawei to the build the UK’s 5G networks today is like allowing the KGB to build its telephone network during the Cold War.’

Democratic Congressman Ruben Gallego issued a similar warning, tweeting: ‘Our special relationship with the UK has to be reconsidered in light of this.

‘Our intelligence sharing capability is going to be compromised by this penny pinching action.’

Trump, his Secretary of State Mike Pompeo and Treasury Secretary Steve Mnuchin had all lobbied Johnson hard to reject any role for Huawei in the UK’s 5G systems.

The U.S. believes that Huawei can be used as a back-door surveillance tool by the Chinese government and that no involvement by it in cell phone systems is safe.

It sees the company as a tool of the Communist party and has warned it could withhold security information from allies who do business with it. 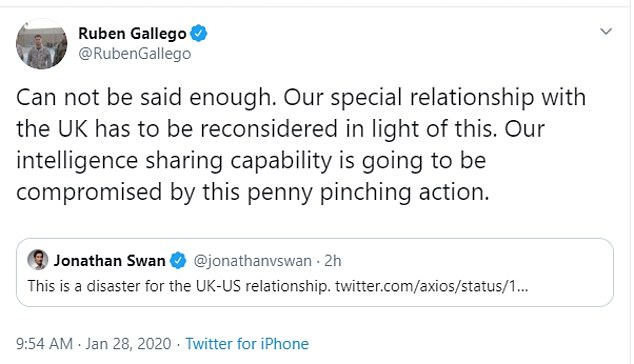 Both sides: Tom Cotton is a hawkish Republican senator and Ruben Gallego is a Democratic congressman. Both are veterans 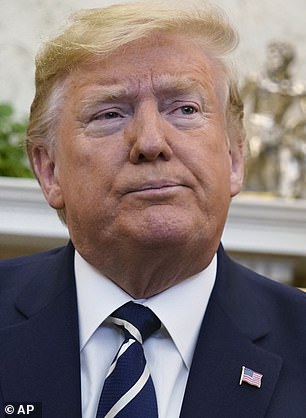 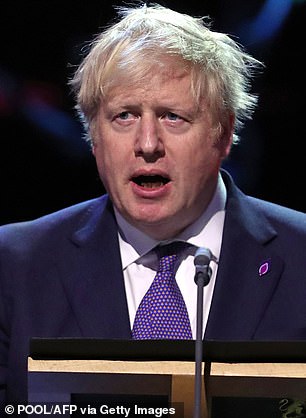 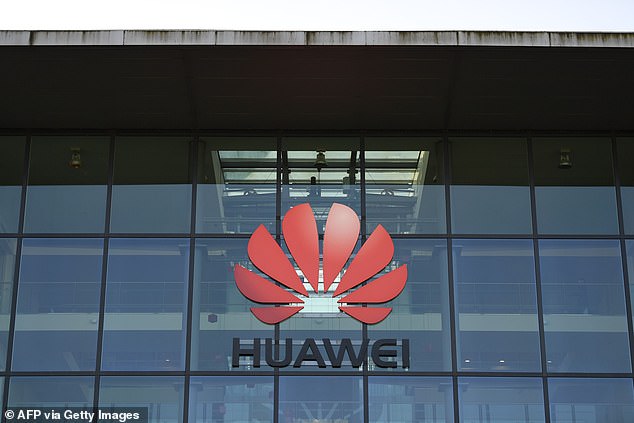 The U.S. believes that Huawei can be used as a back-door surveillance tool by the Chinese government and that no involvement by it in cell phone systems is safe

But Johnson’s government announced Tuesday that it would allow the company to supply equipment to the ‘non-core’ part of the 5G infrastructure, a compromise which appeared to have done little to assuage U.S. concerns.

The country’s National Cyber Security Centre chief executive Ciaran Martin said the measures would put in place ‘strong, practical and technically sound framework for digital security in the years ahead.’

The White House had no immediate comment but a senior Trump administration official said it was ‘disappointed’ and said: ‘There is no safe option for untrusted vendors to control any part of a 5G network.’

But Trump’s Republican Congressional allies and one of his outside advisors scorned the UK’s move. 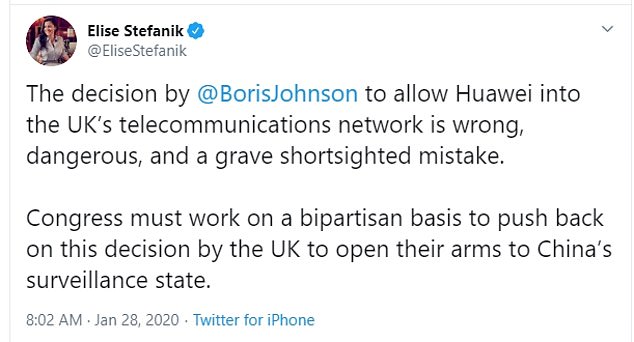 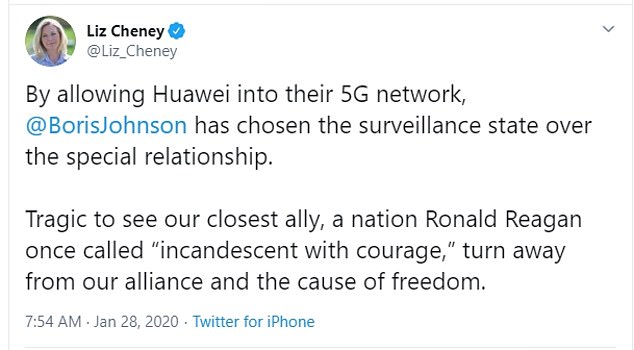 Why is Huawei’s involvement in UK 5G controversial?

Huawei has come under scrutiny over allegations of close ties to the Chinese state.

Founder Ren Zhengfei’s past links to the military have been cited as a concern, as has China’s history of state sponsorship and surveillance.

Chinese law can also compel firms to co-operate with Chinese national intelligence work, which some critics have suggested could see Beijing require Huawei to spy on people through so-called ‘back doors’ in its telecoms equipment.

Huawei has vehemently denied the allegations of any ties with the Chinese state and says it abides by the laws of every country in which it operates.

Among those speaking out on twitter were Liz Cheney one of the most senior Republicans on Congress, and Elise Stefanik, a New York congresswoman who has become a key Trump ally for her fiery defenses of him during impeachment.

Mitt Romney, the moderate Republican, said he wanted the UK to reverse its decision and said: ‘By prioritizing costs, the UK is sacrificing national security and inviting the CCP’s surveillance state in.’

Newt Gingrich, the former House Speaker whose presence in Trump’s inner circle has waxed and waned over the presidency, painted the move in more critical terms.

He called it ‘an enormous strategic defeat,’ language which is unlikely to be well-received in the White House.

‘How big does Huawei have to get and how many countries have to sign with Huawei for the US government to realize we are losing the internet to China?’

That verdict came close to Democrats’ reaction, with Connecticut senator Chris Murphy calling it evidence that Trump has failed to use U.S. power on the world stage, saying: ‘We have never had less influence.’

Johnson faces a testy meeting Wednesday with Pompeo, who is starting a European-swing by visiting with the UK prime minister in London.

The Trump administration’s position on Huawei has been consistently aggressive.

The Commerce Department formally designated it and affiliated companies a threat to national security last May.

Officials had told other countries that if they let Huawei into their 5G networks as they are built, the U.S. would consider restricting intelligence sharing.

The UK and the U.S. are two of the ‘five-eyes’ network of countries which share electronic – or ‘signals’ – intelligence on an almost unrestricted basis. The other three are Canada, Australia and New Zealand.

Australia has followed the United States’ lead and blocked Huawei from being a part of its 5G networks.

When it announced the decision in 2018, the Australian government said the involvement of a company “likely to be subject to extrajudicial directions from a foreign government” presents too much of a risk.

New Zealand has taken a similar position, its Government Communications Security Bureau (GCSB) having previously blocked a request from a New Zealand operator to use Huawei equipment in its 5G infrastructure because of what it said were security risks.

Canada, however, is yet to announce its own verdict on the issue.

The country is now the last of the Five Eyes nations to take a stance on the Chinese firm, with its own government review still to announce a decision, having been delayed for the country’s federal election, which took place late last year.

The issue has complicated already strained relations between the country and China, following the arrest of Huawei’s chief financial officer, Meng Wanzhou – the daughter of Huawei founder Ren Zhengfei – in Vancouver in 2018, at the request of the United States.

She is currently the subject of an extradition hearing and is wanted by the US on fraud charges that she misled banks about the company’s business dealings in Iran.

Beijing has accused Washington of engaging in a politically motivated attempt to hurt the company.