A toddler missing overnight in Canada was tracked down by rescue crews who followed the sound of his giggles.

Courtlund Barrington-Moss, aged two-and-a-half, from in Edmonton, Alberta, was reported missing around 9pm on Monday night.

The little boy vanished after a family gathering in Aneroid, a village of about 50 people in Saskatchewan, about 60 miles north of the U.S. border.

A huge search was launched with Mounted Police from Ponteix, Swift Current and Assiniboia assisted by a police dog and 60 volunteers.

Courtlund Barrington-Moss, aged two-and-a-half, from in Edmonton, Alberta, was reported missing around 9pm on Monday night

Then, at around 9am on Tuesday, two volunteers heard a giggle.

Courtlund could see the rescuers, and ‘he was giggling at them and seeing the horses,’ his mother, his mother, Keeley Moat, told NBC News on Wednesday.

When rescuers reached the tot, ‘the hole that he was standing in was literally as deep as he was tall,’ she added. ‘They could only see his head.’

Courtlund was examined at a hospital, where he was thankfully found to have nothing more than a case of sunburn, a few scratches and multiple mosquito bites, Moat added. 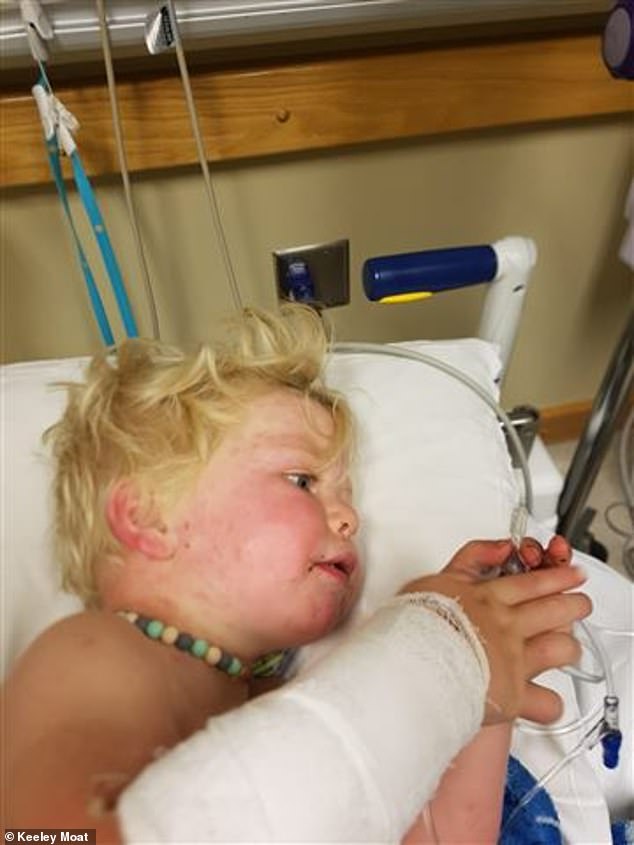 ‘He was honestly just exhausted and not really sure what had happened,’ Moat told the Canadian Press.

‘He saw them before they saw him, actually,’ she said. ‘He saw their horses and started giggling because he wanted to pet the horses.’

The mother also said: ‘We had every piece of technology we possibly could have had out there looking for him, and if it hadn’t been for the locals on foot, on horseback, on quads, we wouldn’t have found him.’