A rescuer working to save survivors of the Miami condo collapse disaster said on Friday that tapping sounds heard on Thursday have ‘dissipated’ – sapping hope for finding the 159 people who are still missing nearly 48 hours after building’s collapse.

Dr. Howard Lieberman, a trauma surgeon with a Miami-Dade Fire Rescue task force, told CNN that rescue crews heard ‘some tapping’ yesterday – or noise indicating that some of the victims may still be alive.

However, he told CNN that the tapping had ‘dissipated’ by Friday night but that crews have not given up hope.

‘It’s a little bit more emotional than going somewhere, where you know there’s no one, let’s say for a hurricane where they had enough warning and they had evacuation time and they got out.’

Dr. Howard Lieberman, a trauma surgeon with a Miami-Dade Fire Rescue task force, told CNN that rescue crews heard ‘some tapping’ yesterday that has since dissipated 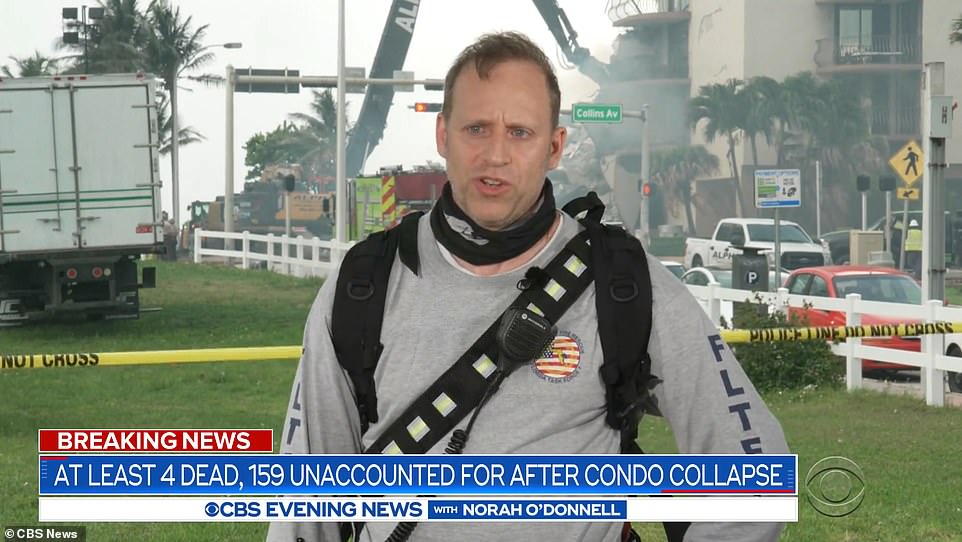 The tapping sounds, which indicate signs of life in the rubble, had slowed since the collapse on Thursday 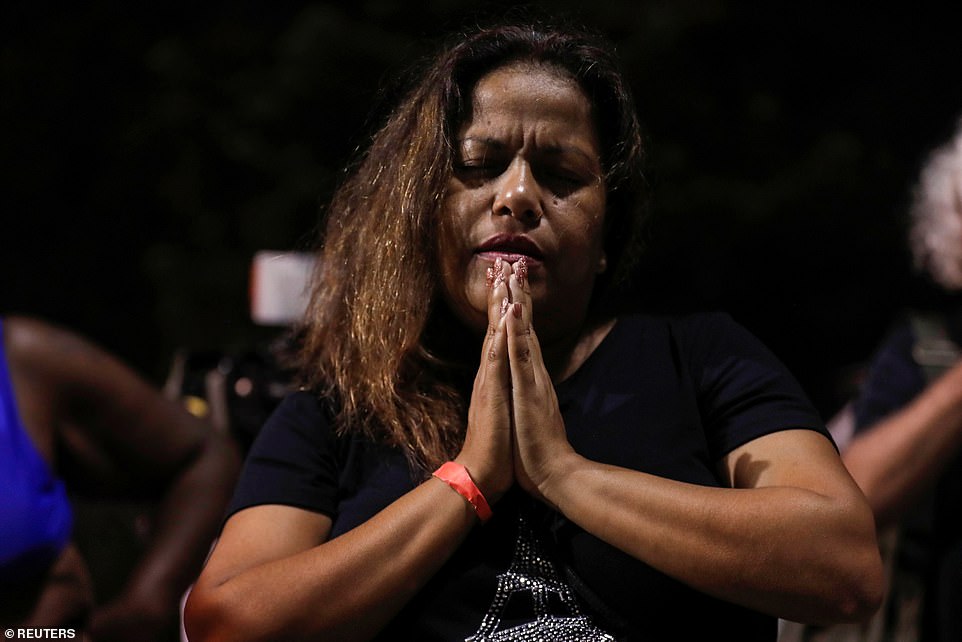 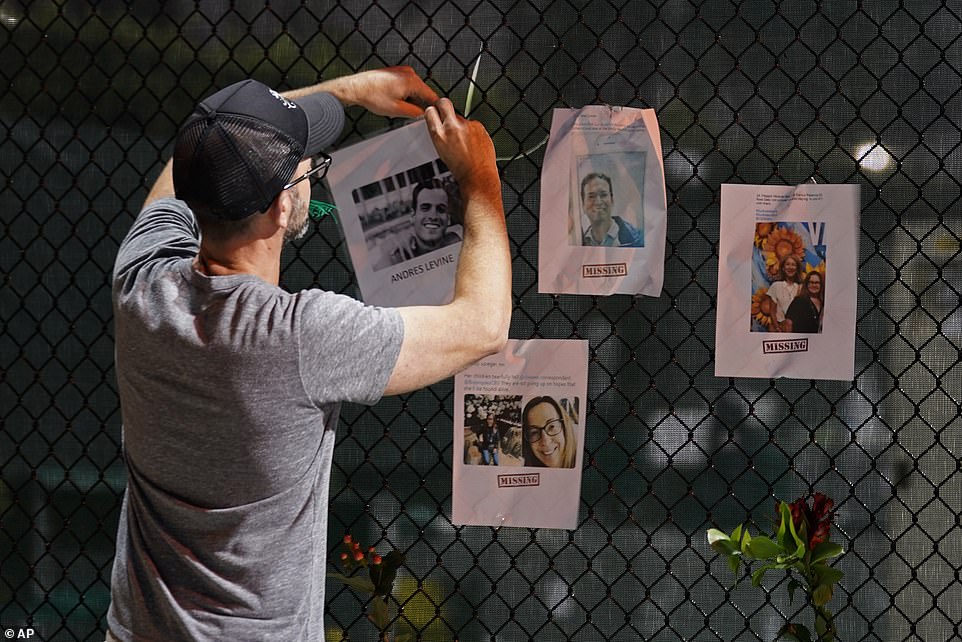 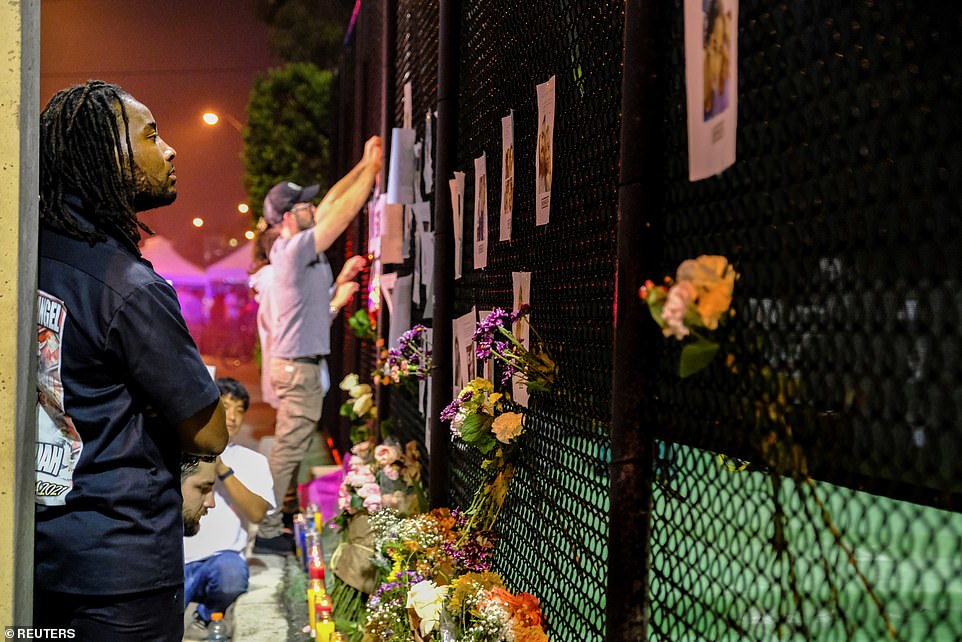 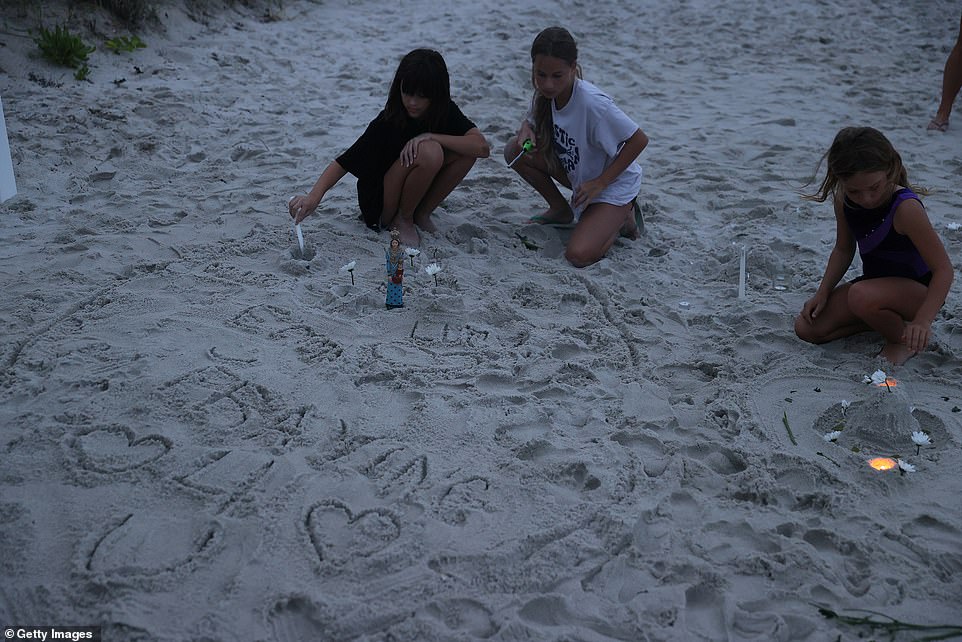 Isabella Cisternino, Camila Giron-Otano and Isabela Giron-Otano, from left to right, light candles in the sand near where search and rescue operations continue at the site of the partially collapsed 12-story Champlain Towers South condo building

Miami-Dade Assistant Fire Chief Raide Jadallah said: ‘Any time that we hear a sound, we concentrate in that area,’

‘It could be just steel twisting, it could be debris raining down, but not specifically sounds of tapping or sounds of a human voice,’ Jadallah said.

Buffeted by gusty winds and pelted by intermittent rain, two heavy cranes removed debris from the pile using large claws Friday, creating a din of crashing glass and metal as they picked up material and dumped it to the side.

Once the machines paused, firefighters wearing protective masks and carrying red buckets climbed atop the pile to remove smaller pieces by hand in hope of finding spots where people might be trapped. In a parking garage, rescuers in knee-deep water used power tools to cut into the building from below.

Surfside Mayor Charles Burkett said crews were doing everything possible to save as many people as they could.

‘We do not have a resource problem, we have a luck problem,’ he said.

The search has not yet transitioned to recovery though some family members waiting at a reunification center have given DNA samples in case they are needed to help identify victims, CNN reported.

‘They are in the tunnels, they’re in the water, they’re on top of the rubble pile,’ she said. The pile’s instability made the work that much more delicate and dangerous.

She noted that the instability of the rubble pile made rescue efforts dangerous as crews ‘can’t dislodge pieces of debris that could injure them in the process.

‘They can’t dislodge debris that could possibly make it more difficult to continue the search,’ she had said earlier on Friday.

Experts have said that rescue efforts remain hopeful because people have been known to survive for weeks underneath rubble piles. 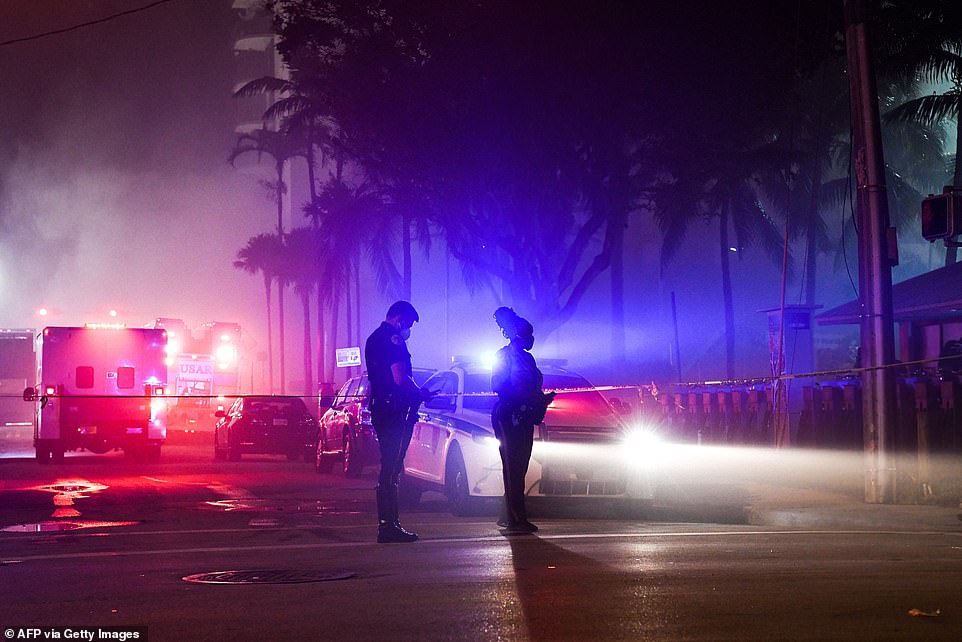 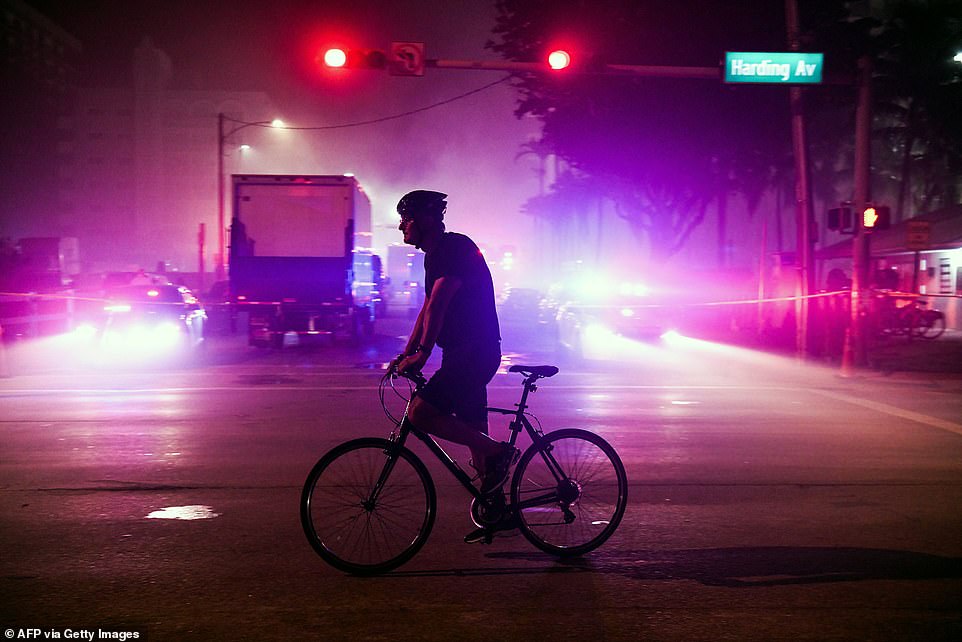 A man rides a bicycle surrounded by smoke from a partially collapsed building in Surfside, north of Miami Beach 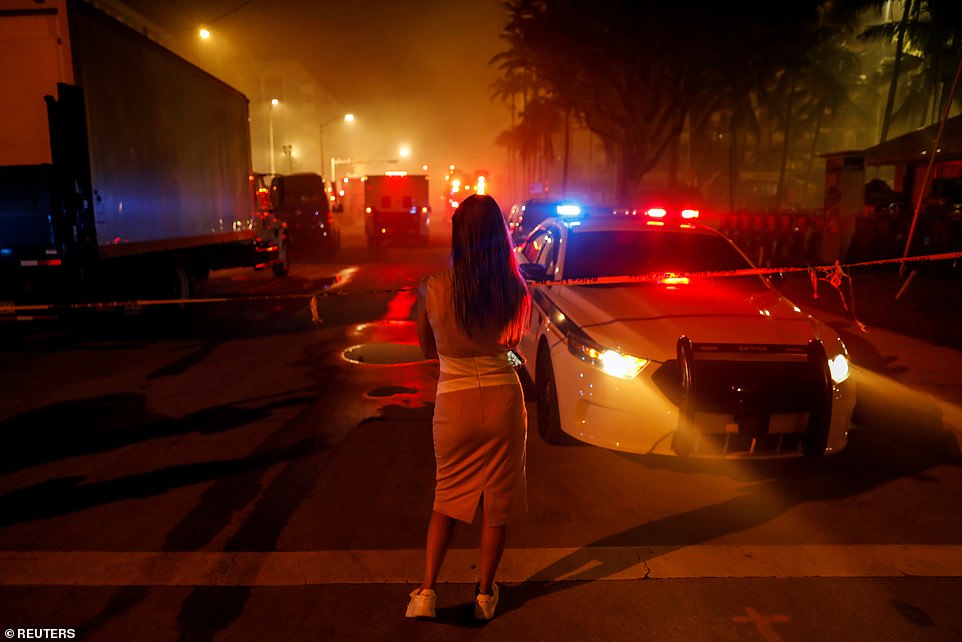 Dr. Mike Cirigliano, a doctor of internal medicine in Philadelphia, told WTXF-TV that people can survive in so-called ‘lean-tos’ where a pocket of space within the rubble allows them an oxygen supply.

He said that in some cases survivors can even last on a supply of water as rainwater can seep into lean-tos, according to the outlet.

A Haitian man survived two weeks underneath a crumbled building after the devastating 2010 earthquake, according to CNN.

At a news conference on Friday night, Miami-Dade Fire Chief Alan Cominsky said there are currently four task force teams working on search and rescue as teams from Mexico and Israel arrived on Friday morning to help with the efforts. 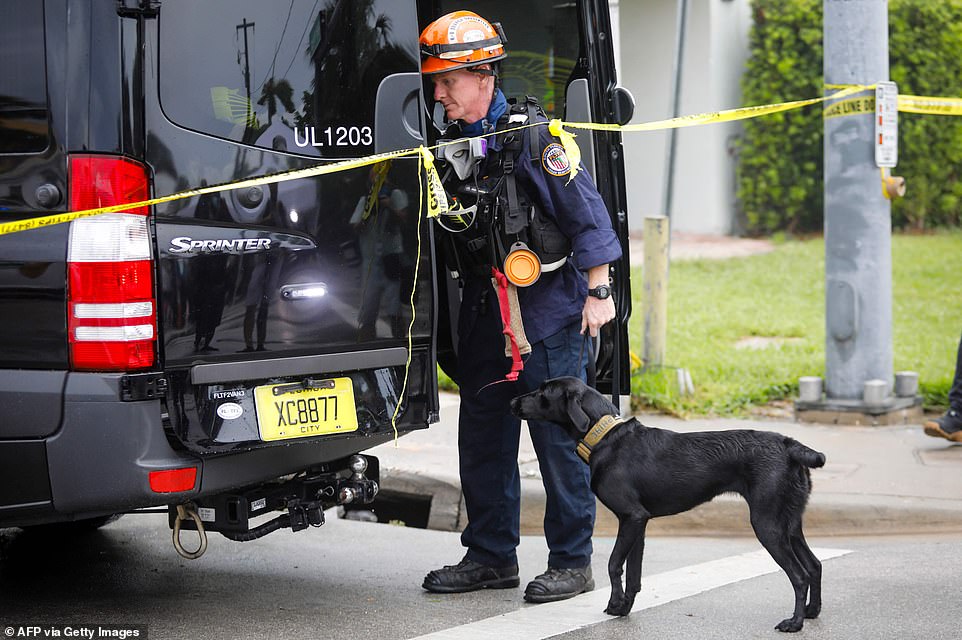 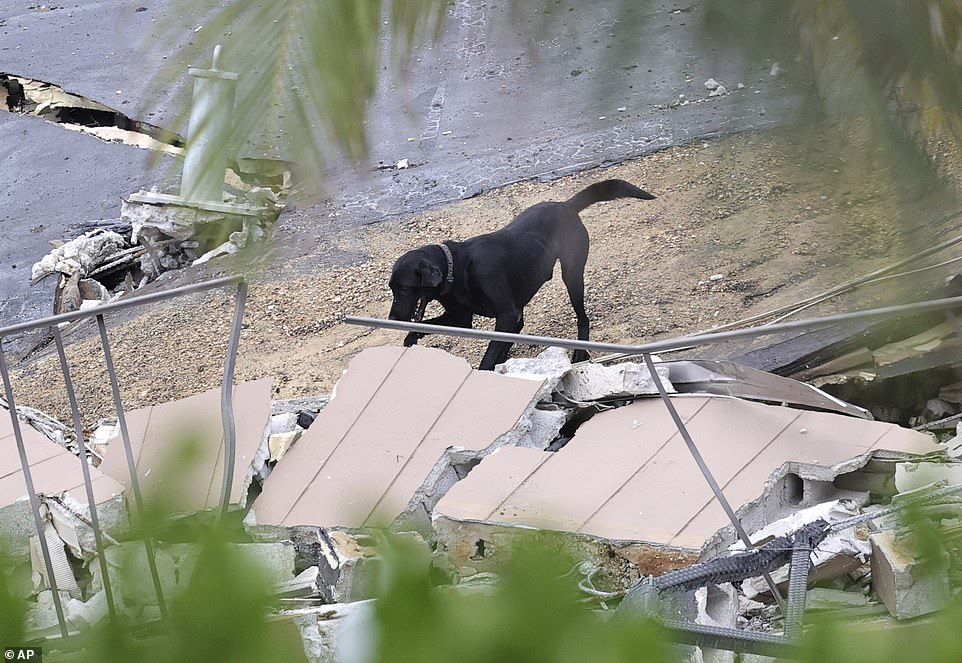 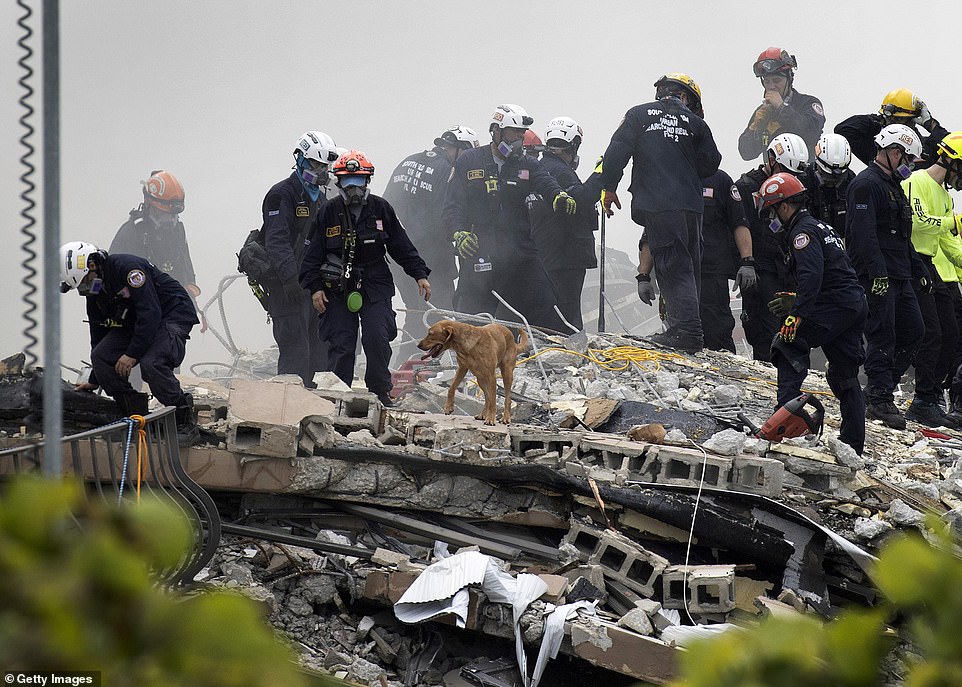 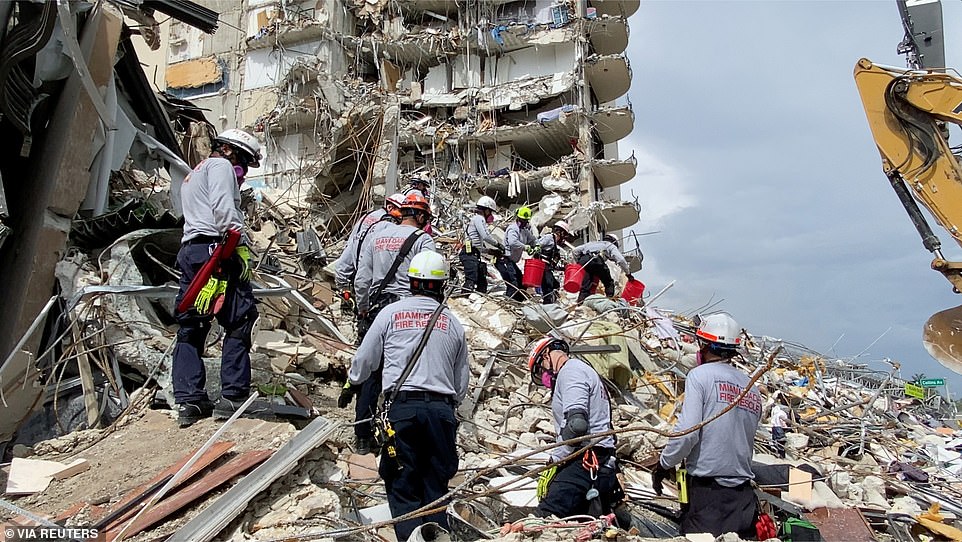 Rescue crew respond at the site after a partial building collapse in Surfside near Miami Beach, Florida 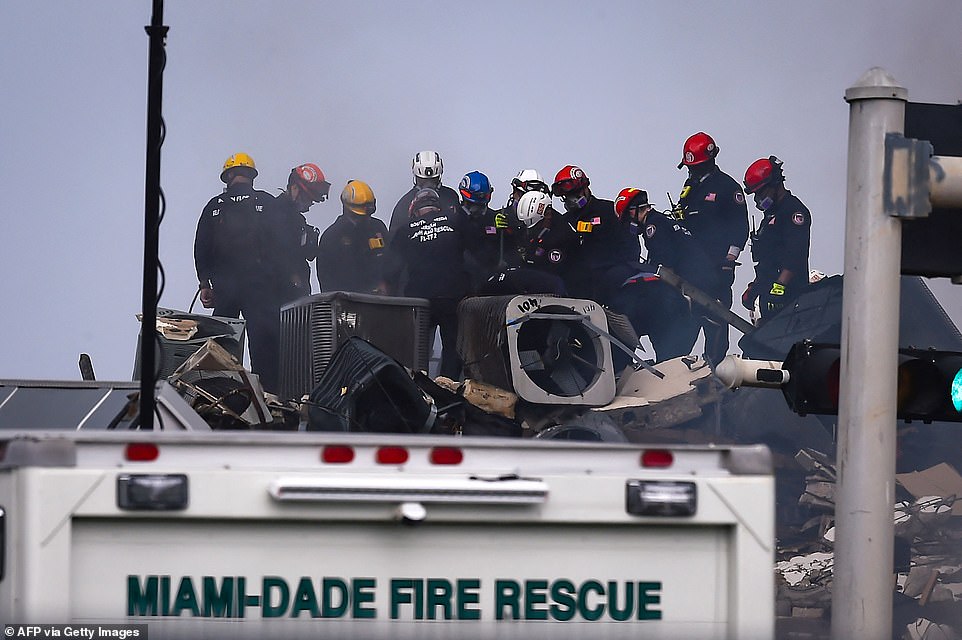 He did not give an exact number for how many personnel from Mexico and Israel had been sent.

Cominsky said crews will be using heavy equipment such as cranes to help move debris on top of the sonar equipment, dogs and video cameras that they have already been using.

He said at the news conference that the main focus has been on sifting through debris underneath the parking garage.

‘Any glimpse of hopes that we have, any signals that we see that’s where want our primary focus. This is where we’ve been focused with the operation and looking for those voids,’ he said. 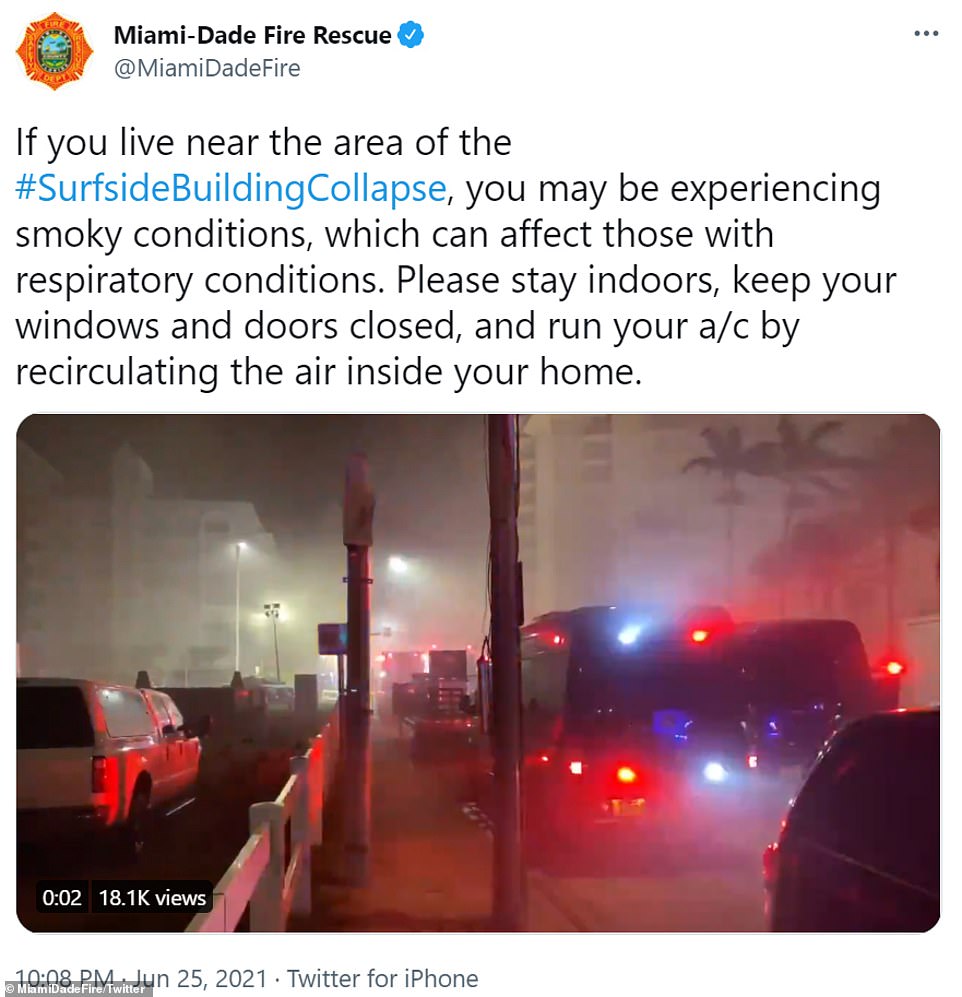 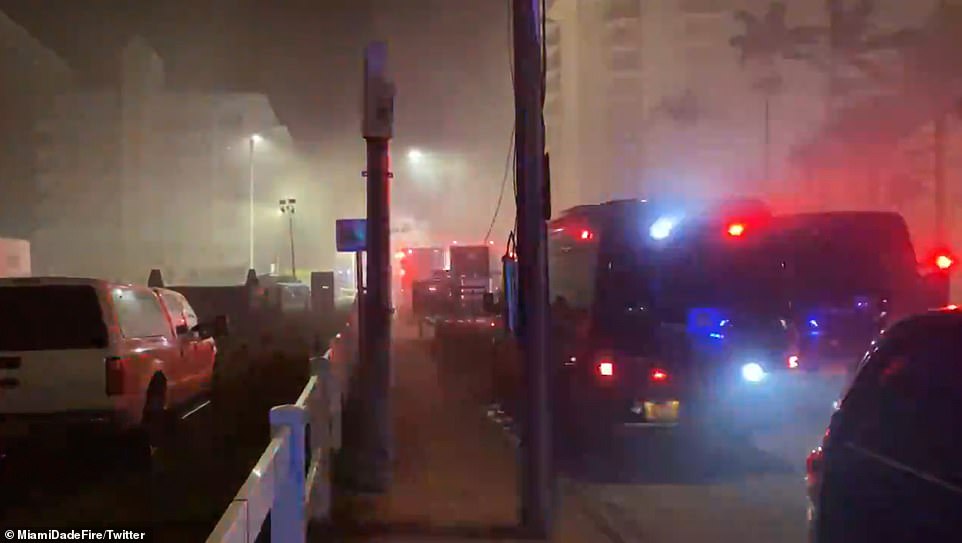 Each rescue team has a doctor like Lieberman to accompany them to aid any potential survivors and rescuers if they happen to be injured during their rescue efforts.

However, Dave Downey – a retired Miami-Dade fire chief – told CBS News that rescuers are ‘essentially looking for needles in a haystack.’

‘While this building came down relatively straight, they’re not — victims and survivors are not going to be located in the exact area where the building used to stand,’ he said.

Mayor Cava said at a news conference on Friday night that rescue efforts will continue through the night as 159 people still remain unaccounted for after the collapse.

‘We’re going to have more resources to pay for this expensive search and rescue and to give us access to more teams for the rescue later, for the clearance of the rubble and for the assistance for the families, as they put their lives back together,’ Cava said.

She added: ‘We’re here, we’ll continue, and please stand by us. Stand by us, as we stand by the families.’

Cava told CNN’s Wolf Blitzer that she continues to have hope survivors will be rescued ‘because our first responders tell me they have hope.’

‘They are the ones on the ground. They are in the tunnels, they’re in the water, they’re on top of the rubble pile. They’re helping to sift through using the cameras, the dogs the sonar and they say they have hope,’ she said.

Rescuers hit a complication in efforts on Friday as they worked to extinguish a ‘deeply rooted fire’ under the structure, fire officials said.

Miami Dade Fire Rescue posted a warning to residents on Friday night about ‘smoky conditions’ after the building collapse.

‘If you live near the area of the #SurfsideBuildingCollapse, you may be experiencing smoky conditions, which can affect those with respiratory conditions. Please stay indoors, keep your windows and doors closed, and run your a/c by recirculating the air inside your home,’ the agency tweeted.

Patricia Mazzei, a reporter for The New York Times, tweeted that ‘the smoke tonight was rough’ while Fox News reporter Lauren Blanchard described the air quality as ‘thick’ and said that it ‘burns.’

‘The wind continues to blow it in waves – sometimes it thins out where we are … but then it kicks back up,’ Blanchard tweeted.

According to research from USA Today, the most common and successful methods used to try to locate survivors include acoustic detection and dogs that can sniff out living survivors. 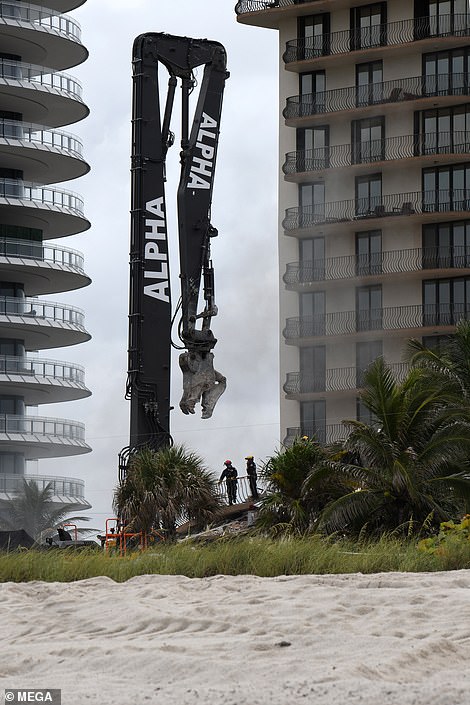 The outlet noted that aerial drones utilizing cameras and other sensors help rescue teams monitor the collapse to find pockets where it’s safe to enter the debris.

Rescuers will often also use data from smartphones and phone service providers which can show if a missing person was in the area at the time of the disaster.

Even more usefully, search teams can use radar and microwave technology to more accurately pinpoint where survivors may be, according to University of Buffalo professor Joana Gaia.

She described the technology to USA Today as being similar to ‘the technology in cars that beeps when you’re close to hitting something.’

‘Responders are operating on a speed rather than accuracy standpoint,’ Gaia said.

‘They think: ‘If I think a body is there, I don’t care how accurate the signal is. I’m just going to try to go save the person.”

David Proulx, a vice president at defense contractor Teledyne FLIR which specializes in thermal sensing, told USA Today that robotics can be ‘incredibly useful’ in detecting survivors underneath the ground.

‘Once you get into that subterranean realm, ground robotics become incredibly useful. It can safely go where humans can’t,’ Proulx told USA Today. 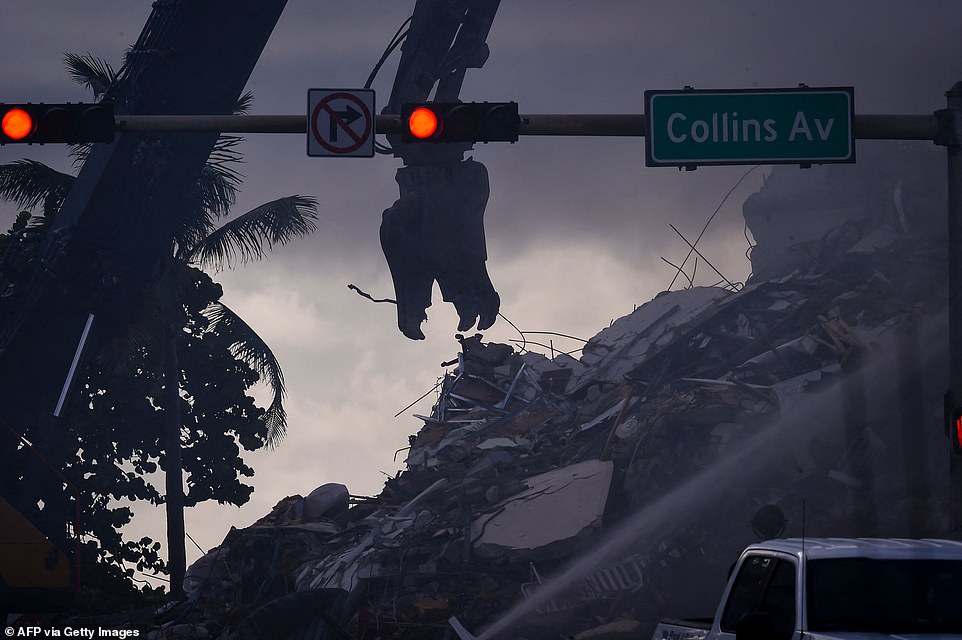 A crane removes wreckage of a partially collapsed building in Surfside north of Miami Beach, Florida on Friday 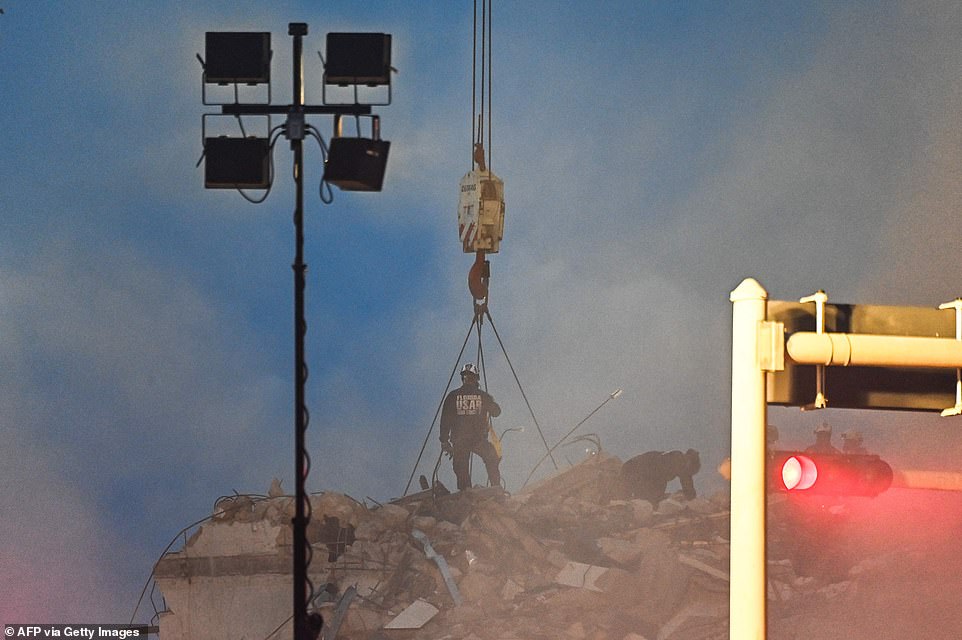 The outlet reported that at least one company is shipping a ground robot from California to help with the search.

In a press release on Friday, the Federal Emergency Management Agency announced that federal emergency aid has been made available to the state of Florida to supplement state and local recovery efforts.

The action from President Joe Biden authorized FEMA ‘to coordinate all disaster relief efforts, which have the purpose of alleviating the hardship and suffering caused by the emergency on the local population.’

‘Specifically, FEMA is authorized to identify, mobilize, and provide at its discretion, equipment and resources necessary to alleviate the impacts of the emergency,’ the news release reads.

Thomas J. McCool has been named as the Federal Coordinating Officer for federal response operations for the affected area.