Researchers build the world’s fastest ‘soft’ robot, which can travel more than THREE TIMES faster than the previous record holder using movements that mimic a cheetah

A team from the university’s Mechanical and Aerospace Engineering department created a robot capable of moving 2.7 times its own body length each second, more than three times faster than the previous record of 0.8 times body length per second.

The tiny robot–it weighs just 1.5 ounces and measures 2.7 inches long–was designed to run like a cheetah, with four bent legs and a long flexible torso made from silicone.

A team of engineers at North Carolina State University developed a small ‘soft’ robot modeled after a cheetah, which uses silicone bands to expand and contract in a galloping motion that mimics a cheetah’s movement

‘We were inspired by the cheetah to create a type of soft robot that has a spring-powered, “bistable” spine, meaning that the robot has two stable states,’ North Carolina State’s Jie Yin told Eurekalert.

‘We can switch between these stable states rapidly by pumping air into channels that line the soft, silicone robot. Switching between the two states releases a significant amount of energy, allowing the robot to quickly exert force against the ground.

‘This enables the robot to gallop across the surface, meaning that its feet leave the ground.’

The field of soft robotics was founded on the idea of using more flexible materials to try and make robots modeled on natural forms to make them more dynamic and better able to move in a variety of terrains.

Toward that end, the team also demonstrated their tiny cheetah-inspired robot could also move up steep inclines, though at a slower speed than when traveling on a flat surface.

The team hopes their design could become the basis of an entirely new category of soft robots, which they call ‘Leveraging Elastic instabilities for Amplified Performance’ or LEAP. 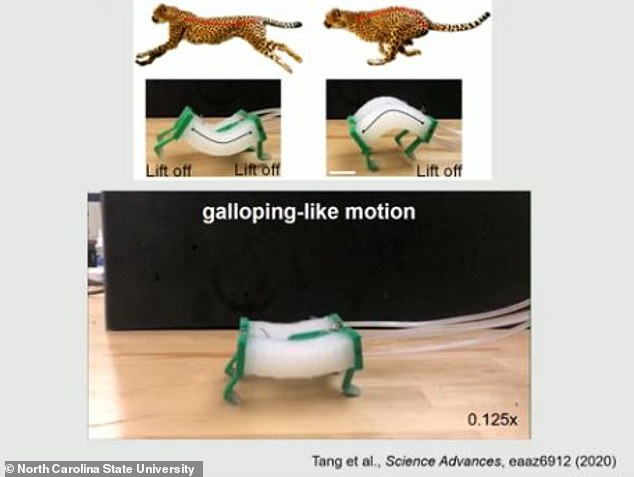 The robot traveled 2.8 times its own body length each second, more than three times the previous record holder for fastest soft robot 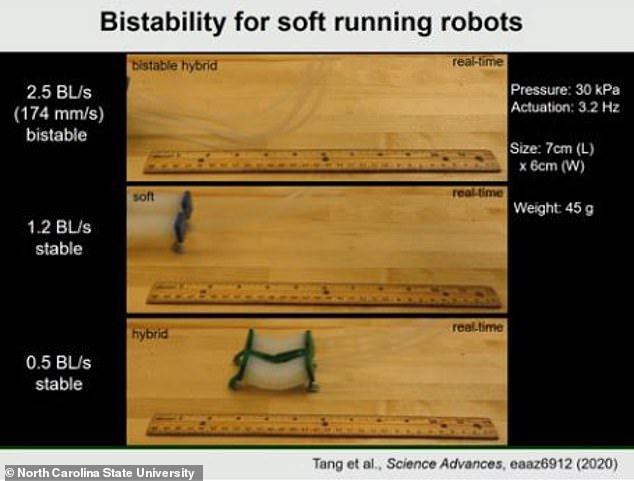 The researchers also tested the robot’s ability to work in larger groups and showed that with pincer-like arms, the robot swarms were able to both lift objects that weighed as much as 22 pounds.

In the future, Yin hopes these dynamic abilities could help the robots fulfill several different productive roles in society.

‘For example, imagine production line robotics that are faster, but still capable of handling fragile objects.’