Real spider silk is one of the toughest materials on Earth — proportionally tougher than steel.

However, according to research published in the journal ACS Nano, engineers at Washington University in St. Louis have one-upped Mother Nature, designing hybrid silk proteins that are more resilient.

In 2018, Fuzhong Zhang, a professor of synthetic biology at the university, spliced silk-producing genes into bacteria and produced a recombinant fiber on par with spider silk.

Engineers at Washington University in St. Louis have produced silk hybrid proteins in engineered bacteria they claim are stronger and tougher than some natural spider silks

‘After our previous work, I wondered if we could create something better than spider silk using our synthetic biology platform,’ Zhang said in a statement.

So his team got to work further modifying the amino acid sequence of spider silk proteins to introduce some new properties, while keeping others.

A crucial ingredient in spider silk, natural or synthetic, are beta-nanocrystals, microscopic particles that increase flexibility and durability.

To overcome this obstacle, the engineers introduced long protein sequences that have a high tendency to form beta-nanocrystals and are actually easier to produced in the lab.

The bacteria produced a hybrid polymeric amyloid protein with 128 repeating units, according to the report, resulting in a fiber with an average ultimate tensile strength of around 1,000 megapascals (MPa).

Megapascal strength is a measure of how much force is needed to break a fiber of fixed diameter: In comparison, the tensile strength for structural steel is 400 MPa and for carbon steel it’s 841 MPa.

Thanks to the increased number of nanocrystals, the fibers had an average toughness of around 161 Megajoules/m3, higher than Kevlar and all previous recombinant silk fibers, the researchers say—even higher than some natural spider silk fibers.

‘This demonstrates that we can engineer biology to produce materials that beat the best material in nature,’ Zhang said.

The maybe not the absolute best—the silk of the wolf spider’ is the toughest biological material known to man, with an average toughness of  350 MJ/m3. (Some have spun silk up to 520 MJ/m3.)

Still, Zhang’s team experimented with just a few of the thousands of potential protein sequence combinations, opening the door to even stronger fibers mimicking the properties of natural spider silk. 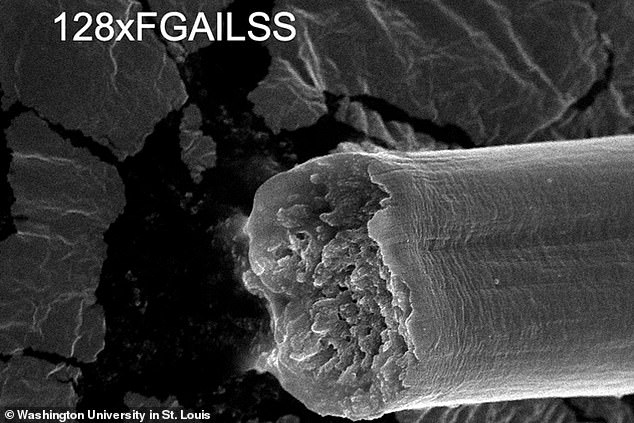 A closeup of the polymeric fiber with 128-repeated proteins created by Zhang’s team. The engineered ‘spider silk’  has a tensile strength higher than common steel and is tougher than Kevlar 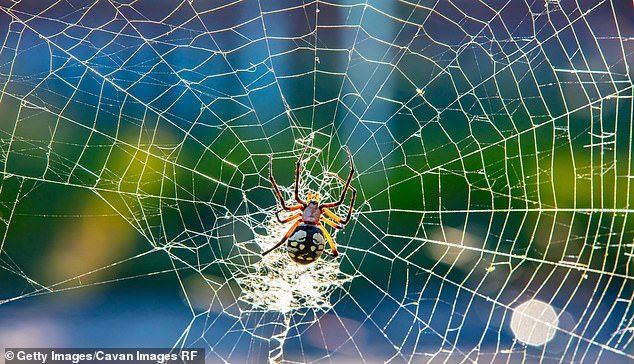 Researchers have long been working to re-create the incredible properties of spider silk: last month, organic chemists at the University of Cambridge reported they’d developed an all-natural film inspired by arachnids’ output that could be used to replace single-use plastics in many consumer products.

SPUN OUT: WHY ARE SPIDER WEBS SO STRONG?

The strength of a biological material like spider silk lies in the configuration of structural proteins, which have small clusters of weak hydrogen bonds that work cooperatively to resist force and dissipate energy.

This structure makes the lightweight natural material as strong as steel, even though the ‘glue’ of hydrogen bonds that hold spider silk together at the molecular level is 100 to 1,000 times weaker than the powerful glue of steel’s metallic bonds.

The plant-based material has the strength of human-made synthetic polymers in plastic bags and film wraps, but fully decomposes naturally at home, alleviating the need for industrial composting facilities.

It will be commercialized by Xampla, a Cambridge spin-off developing replacements for single-use plastic and microplastics.

Xampla says it will introduce a range of single-use sachets and capsules later this year, four use in condiment packets and detergent pods, as well as sandwich containers and salad boxes.

It’s also working on developing edible films, which can be used for applications such as oral delivery of drugs.

Organic chemist Rodriguez Garcia, lead author of a report published in Nature Communications, said other researchers have been working with silk materials as a plastic replacement, ‘but they’re still an animal product.’

‘In a way we’ve come up with ‘vegan spider silk’ – we’ve created the same material without the spider,’ he said.

The team replicated the structures found on spider silk by using soy protein isolate (SPI), which is readily available as a by-product of soybean oil production.