Scientists are feeding seaweed to dairy cows in an attempt to make cattle more climate-friendly.

Researchers found methane emissions were reduced by more than 30 per cent in a dozen Holstein cows that ate the ocean algae.

Small amounts of the seaweed were mixed into the animals’ feed and sweetened with molasses to disguise the salty taste.

The cows pictured were fed ocean algae to reduce their greenhouse gas emissions. Researchers say methane emissions were reduced by more than 30 per cent in a dozen Holstein cows that ate the seaweed

‘I was extremely surprised when I saw the results,’ said Professor Ermias Kebreab, the University of California, Davis, animal scientist who led the study.

Cow digestion relies on millions of microbes in their guts that process and ferment high-fibre foods.

This allows them to eat tough foods like grass, but produces a lot of methane, a greenhouse gas that is responsible for a quarter of man-made global warming.

But a compound found in some seaweeds has been found to disrupt enzymes used by the microbes to produce methane.

In experiments conducted by Professor Kebreab and his team in May, methane emissions in cows fed seaweed dropped by almost a third. 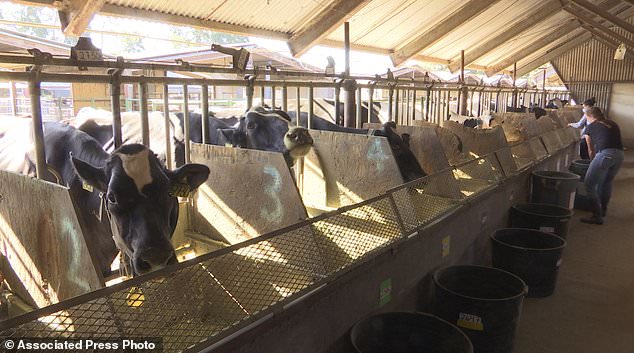 Pictured are cows involved in a study that aims to investigate whether feeding cattle seaweed could cut greenhouse gas emissions. A compound found in some seaweeds has been found to disrupt enzymes used by cow gut microbes to produce methane

Follow-up experiments are required to confirm the finding, he said.

The team plans to conduct a further six-month study of a seaweed-infused diet in beef cattle, starting in October.

More studies will be needed to determine its safety and efficacy, and seaweed growers would have to ramp up production significantly to make it an economical option for farmers.

Dairy farms and other livestock operations are major sources of methane, a heat-trapping gas many times more potent than carbon dioxide.

Many people argue that cows are bad for the environment.

There’s an added problem for cows in that they produce a huge amount of methane.

Methane is 23 times more potent than carbon dioxide in trapping heat in the atmosphere and can be found in animal waste, landfills, coal mines and leaking natural gas pipes.

The White House has proposed cutting methane emissions from the dairy industry by 25 percent by 2020.

Cows are by far the biggest producers, contributing to around 25 per cent of all methane produced on the planet.

Researchers worldwide have searched for ways to reduce cattle emissions with various food additives such as garlic, oregano, cinnamon and even curry – with mixed results.

If successful, adding seaweed to cattle feed could help California dairy farms comply with a state law requiring livestock operators to cut emissions by 40 per cent from 2013 levels by 2030.

‘If we can reduce methane on the dairy farm through manipulation of the diet, then it’s a win for consumers because it reduces the carbon footprint, and it’s for dairy farmers because it increases their feed efficiency,’ said Michael Hutjens, an animal scientist at the University of Illinois, Urbana-Champaign.