Reserve Bank hikes rates for eighth month in a row to a 10-year high of 3.1 per cent

The Reserve Bank has hiked interest rates for a record eighth month in a row to the highest level in a decade – and signalled there would be more pain to come.

Governor Philip Lowe delivered the bad news for home borrowers on Tuesday afternoon, taking the cash rate to a new 10-year high of 3.1 per cent, up from a nine-year high of 2.85 per cent.

This means a borrower with an average $600,000 mortgage see their monthly repayments rise by another $91 to $3,236, with Christmas only three weeks away.

The eighth consecutive monthly increase is the most in a row since the Reserve Bank began publishing a target cash rate in 1990 – since May adding $930 to a typical borrower’s monthly repayments.

Dr Lowe said this would be far from the last increase, with Westpac and ANZ both expecting three more rate rises by May.

The RBA is forecasting inflation hitting a new 32-year high of 8 per cent by New Year’s Eve as Australia experiences a ‘price-wages spiral’.

‘The board remains resolute in its determination to return inflation to target and will do what is necessary to achieve that,’ Dr Lowe said.

It also marks the most severe RBA tightening in a calendar year in records going back 32 years, and surpasses the sharp rate rises of 1994.

This is despite Dr Lowe last year suggesting interest rates would remain on hold at a record-low of 0.1 per cent until 2024, but that assertion was made before Russia’s Ukraine invasion in February pushed up global crude oil prices.

Inflation in the year to September surged by 7.3 per cent – the fastest increase in 32 years.

While it moderated to 6.9 per cent in October, that was a monthly figure that had less data than the figures for the September quarter.

The Reserve Bank is still expecting headline inflation – also known as the consumer price index – to this year peak at 8 per cent for the first time since 1990.

This is more double the RBA’s two to three per cent target.

Dr Lowe’s latest increase comes eight days after he apologised to borrowers who took out a mortgage in 2021 expecting rates to stay on hold at a record-low of 0.1 per cent.

‘That’s regrettable and I’m sorry that that happened.’ 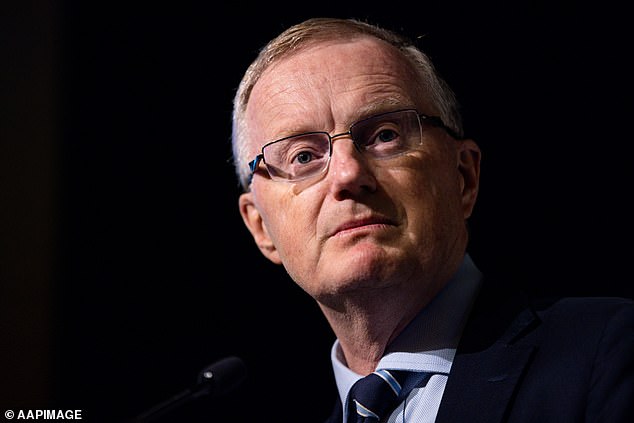 Governor Philip Lowe delivered the bad news for home borrowers on Tuesday afternoon, taking the cash rate to a new 10-year high of 3.1 per cent, up from a nine-year high of 2.85 per cent

The 18-month era of the record-low 0.1 per cent cash rate ended in May with a 0.25 percentage point rate rise – the first increase since November 2010.

The banks are required to assess a borrower’s ability to cope with a three percentage point increase in variable mortgage rates but the RBA in eight consecutive months has hiked rates by 300 basis points.

Westpac and ANZ are expecting the cash rate to hit an 11-year high of 3.85 per cent by May, which would mean three more 0.25 percentage point rate hikes.

The wage price index in the year to September grew by 3.1 per cent – the fastest pace since 2013 and Dr Lowe is expecting wages growth to accelerate with unemployment in October hitting a 48-year low of 3.4 per cent.

‘Wages growth is continuing to pick up from the low rates of recent years and a further pick-up is expected due to the tight labour market and higher inflation,’ he said.

‘Given the importance of avoiding a prices-wages spiral, the board will continue to pay close attention to both the evolution of labour costs and the price-setting behaviour of firms in the period ahead.’

What a 0.25 percentage point rate rise will mean for borrowers