Australia’s most senior banker has slammed bosses for failing to hire new people, fearing the lack of innovators will worsen the COVID crisis.

Reserve Bank of Australia governor Philip Lowe said there was a ‘lack of economic dynamism in Australia’ as the first recession in 29 years loomed.

‘I’ve been concerned about this for some years and I’m even more concerned it now,’ Dr Lowe told an Australian National University leadership forum.

Australia’s most senior banker has suggested the nation’s entrepreneurs are too lazy when it comes to taking risks – which could worsen the COVID crisis. Pictured is an office site for lease at Bourke Street in downtown Melbourne

The head of Australia’s central bank, who earns more than $1million a year, said that even before the coronavirus pandemic, too few new businesses were being set up.

‘Before the virus hit, we saw slow rates of business formation,’ he said.

‘We saw low rates of job switching and we saw reduced research and development expenditure in Australia.

‘They’re all signs we’re not as dynamic as we used to be.’

Australia’s unemployment rate in May surged to a 19-year high of 7.1 per cent, following two full months of coronavirus shutdowns of non-essential businesses.

This occurred as 227,700 people last month either lost their job or gave up looking for one.

In April, close to 600,000 workers in the same position left the labour market, which saw the jobless rate rise from 5.2 per cent to 6.4 per cent.

The Reserve Bank is expecting Australia’s jobless rate to hit ten per cent by June, a level unseen since April 1994.

Dr Lowe said the over regulation of business was preventing entrepreneurs from setting up new businesses.

‘The society’s attitude to risk taking, the nature and extent of regulation, the tendency to regulate whenever we see a problem, incentives we set up in the tax system for entrepreneurship and the arrangements for research and development – they’re the things making us less dynamic,’ he said.

The RBA and Treasury are both bracing for the worst economic downturn since the 1930s Great Depression, amid fears gross domestic product will plunge by ten per cent in the first half of 2020. 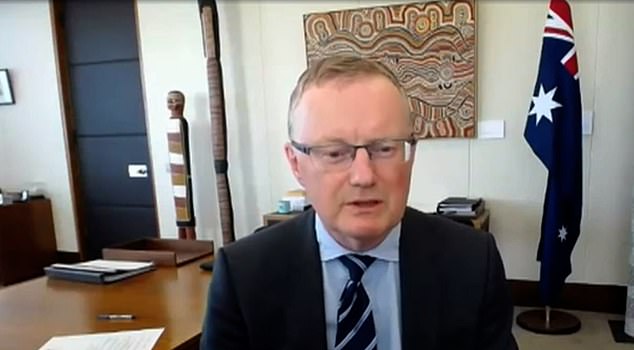