When sleep-deprived residents were told of new licences to have seagulls’ nests removed from outside their homes, they did not expect any fowl play.

But their joy was short-lived when they found out the troublesome birds’ nests could not be removed without a doctor’s note.

A new gull licence, being trialled by councils in Bath and Worcester, requires the public to prove they have requested help from a GP before gull control officers can take any action.

Residents have been told salmonella-ridden gull faeces and sleep-deprivation are not acceptable public health reasons for the nests’ removal without a medical note.

A new gull licence, being trialled by councils in Bath and Worcester, requires the public to prove they have asked for help from a GP before the bird’s nests will be removed (stock image)

Rebecca Roberts, who has lived in central Bath for 10 years, told The Daily Telegraph that she initially thought the licence was good news.

But she added: ‘I need to get my doctor to write a note saying my health is being affected and I should clean up and disinfect after the gulls to prevent their droppings becoming a health hazard.’

The new ‘organisational licence’ was intended to help prevent the growth of seagull populations in towns and cities – where the birds thrive by feeding on litter – instead of their natural coastal habitats.

But contractors say removals are still being dealt with on a case-by-case basis, making it difficult to remove the nests before the gulls breed.

Gordon Dugan, a gull control officer for Worcester city council, said: ‘In one case, a chartered psychologist and trauma consultant was commissioned to produce a report on the impact of gulls on a resident.’

In Bath, only 20 nests have been removed this year from an estimated 835 breeding pairs. 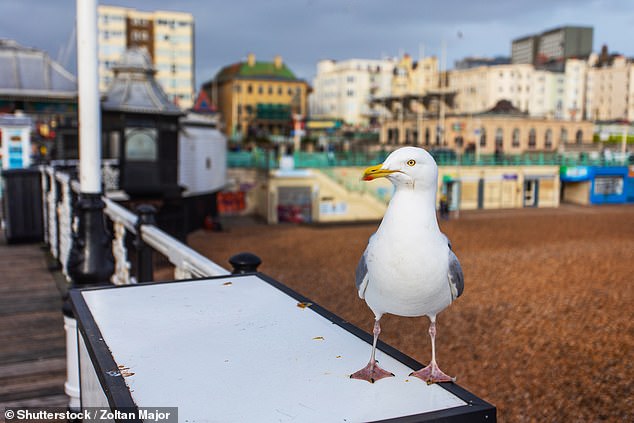 A survey by Natural England earlier this year found that four-fifths of gulls now live in urban centres away from their natural seaside homes.

Dave Slater, Natural England’s Director for Wildlife Licensing & Enforcement Cases, said: ‘All birds are protected by law, and due to their poor conservation status lesser black-backed gulls and herring gulls – which are a common sight in many English towns – can no longer be controlled under the general licence.

‘There remains provision for Natural England, as the licensing authority, to grant individual licences for control – however as with all licensing lethal control should be a last resort.’

MailOnline has contacted Bath and Worcester councils for comment.