A resident has shared the note he was sent by a neighbour shaming him for having a green lawn while other people don’t have enough water to ‘drink or shower’.

The Brisbane man was sent the blunt note written on an envelope by his incensed neighbour – despite there being no water restrictions in place where they live.

‘Shame on you! There are places that haven’t got enough water or shower but your lawn is green,’ the note read.

When the resident shared a photo on Facebook, they explained how they water their lawn for about 30 minutes once a fortnight.

‘My lawn honestly doesn’t look the greatest right now but I still got this in the mail,’

‘Maybe I have tank water or a gray water system.’

The resident also said his water bill was what it should be for two people.

Many people who commented on the post have backed the resident and some even encouraged him to water more.

‘Water twice a week now. Get that grass green,’ one person said.

One man pointed out that it’s not just water that effects the grass but fertilizer too.

And while many people were cavalier about the water use, some thought the note was fair as parts of Australia soon face the toughest water restrictions they have ever seen.

The nation’s crippling drought shows no sign of easing and experts have warned that hose bans, personal water limits and fines of up to $50,000 for violations are among measures that will be considered in the absence of major rainfall. 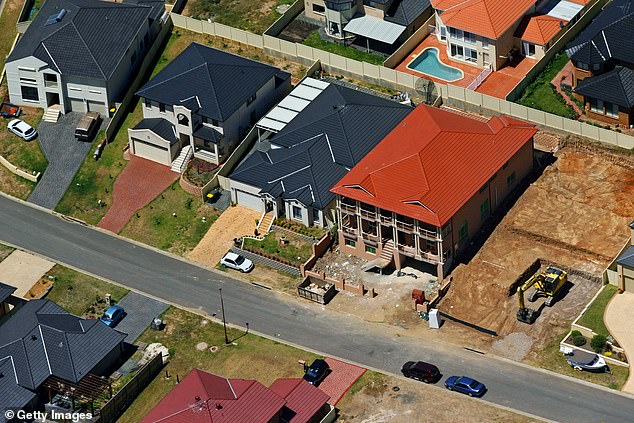 Sydney saw the introduction of level one restrictions in June, with $220 fines for using a hose between 10am and 4pm – and Sydney Water is already encouraging residents to dob on neighbours by reporting any breaches.

Experts are warning that level two is not far away and after that level three would bring the harshest restrictions since the Millennium drought.

NSW: Water Restrictions Level 1, sprinkler and residential restrictions in Sydney, the Blue Mountains and the Illawarra

During the mid-2000s, dams dried up, garden lawns turned brown, and desperate farmers begged for rain on their knees as the Earth cracked beneath their feet.

As the apocalyptic conditions worsened, some feared it would never rain again.

The drought was so horrific that level three water restrictions were enforced in Sydney in 2005.

Hoses were banned except for two days a week, watering systems and new swimming pools were forbidden and motorists could only wash their cars with buckets.

Such measures may seem distant but they could be imposed on Sydneysiders in as little as two years’ time, according to UNSW Engineering Professor Stuart Khan.

Meanwhile, the situation is far worse in other regions of the country that have seen critical water restrictions already implemented.

In parts of southern Queensland residents have been restricted to just 100 litres of water a day.

The town of Warwick, 130 kilometres south-west of Brisbane, has not had a drop of rain for more than 70 days. 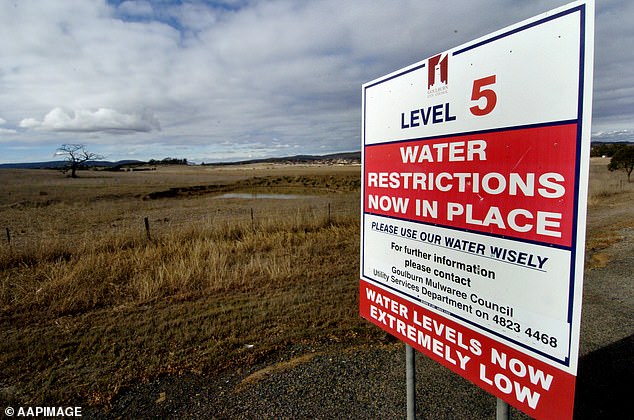 A warning sign reminds residents and visitors of the state of the water supply in Goulburn , Friday, May 26, 2006. The NSW inland town was in stage 5 water restrictions 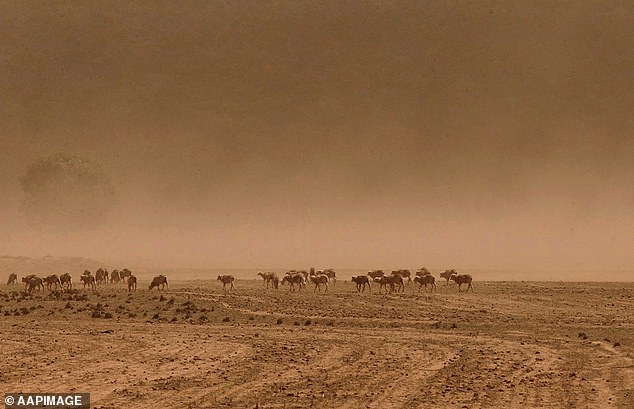 A dust storm across a sheep paddock in Rankin Springs, 50km north east of Griffith in NSW in October 23, 2002, during the Millennium drought

The drought has prompted the Southern Downs regional council to ban all outdoor water use with a few exceptions, prompting religious leaders to hold ‘pray for rain’ services.

The situation is also critical in the town of Stanthorpe, south of Warwick.

Residents are showering in the local gym so they don’t use too much water at home and fall foul of the restrictions.

People are showering as little as once every three days, locals say, which is causing hygiene problems particularly at the local school.

Although the Southern Downs are suffering the most, there are some restrictions in in all states except Tasmania and the Northern Territory.

Western Australia, the ACT, Victoria and SA have permanent restrictions in place. 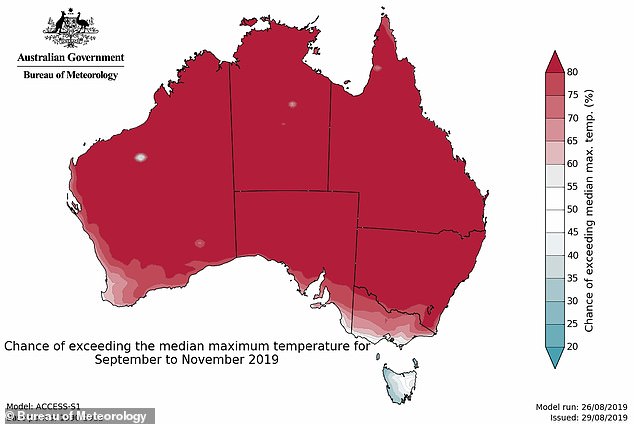 It comes as Australia is bracing for a horror summer this year after experts warned of a perfect storm of conditions causing a spate of bush fires and mass fish deaths.

The latest seasonal bushfire outlook has forecast above average fire potential across Australia – including the entirety of the New South Wales coastline.

The ominous warning by the Bushfire and Natural Hazard Cooperative Research Centre comes amid the driest start to the year nationally since 1970.

In the country’s southern half, the report reveals, the period from January to July has been the driest on record.

The Bureau of Meteorology, meanwhile, has said the current winter period will go down as one of the top ten warmest on record.

The BoM released a weather outlook for September to November – predicting nearly the whole of Australia would exceed average Spring temperatures.

The bush fire danger period in New South Wales has been brought forward this year to August 1, well before the traditional start date in October.

What are level three restrictions?

The NSW government has not specified exactly what level three restrictions would mean.

But the water plan says: ‘Emergency restrictions involve very limited or no outdoor water use.

‘This could include no washing of outdoor surfaces or cars, only using greywater for garden watering, and lower per person water use targets to save water in and around the home.’

In 2005 level three restrictions were:

No hoses for washing vehicles or hard surfaces. There are exemptions for swimming pools and containers, which may be filled by hose.

No sprinklers or other water systems at any time.

No filling of new or renovated pools greater than 10,000 litres except with a permit from Sydney Water