Tim Challinor, 52, a disabled cyclist, has rowed with the owner of an Indian restaurant after he left a less than complimentary review

A disabled British cycling champion says he is disgusted by a restauranteur who branded him ‘a sad, pathetic, lonely man’ after he left a bad review on TripAdvisor.

Tim Challinor, 52, who has won a para cycling British Championship, was astonished by the tirade following his assessment of the Tuk Tuk restaurant in Eastbourne.

The owner of the eatery, Nobi Hussain, who was irritated by Mr Challinor’s claim that the service was poor, fired off an extraordinary riposte in which he ridiculed the disabled athlete for telling staff ‘his sad life story’.

‘We could not care less that you are a Paralympian,’ ranted Mr Hussain, who runs Tuk Tuk with his wife, Shalema.

Mr Challinor, a former Royal Navy Able Seaman and Ministry of Defence firefighter, said: ‘It is wholly out of order. I’m disgusted. He shouldn’t speak to people like that. He has been downright offensive.’

The rider was in Eastbourne earlier this month to try to regain his fitness after a series of health problems. He ate at the tapas bar in the town’s Terminus Road on two consecutive evenings.

He says that during the meals he chatted with staff and while he enjoyed the food, singling out the mutton curry for particular praise, the service was slow on his second visit. 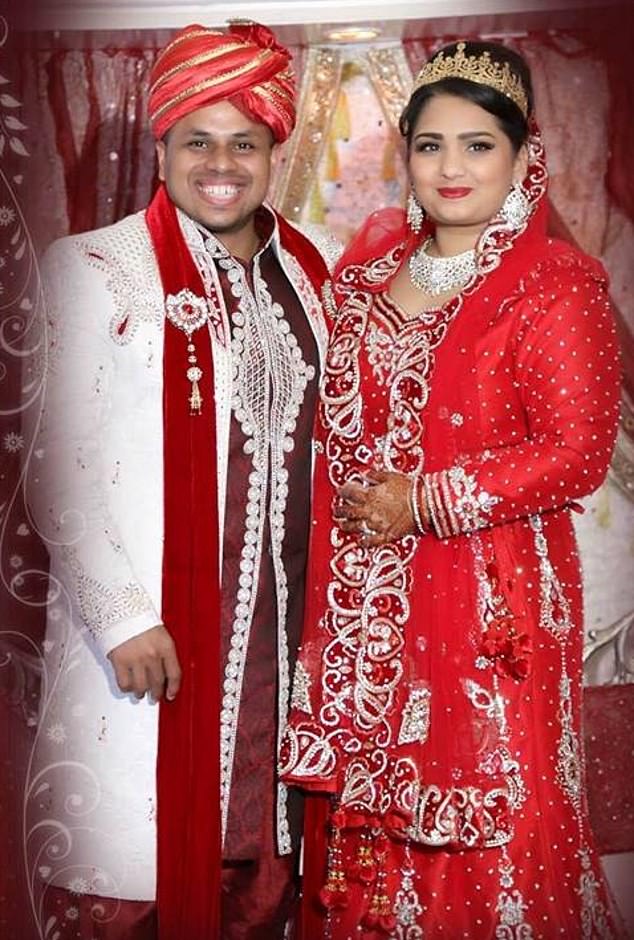 Nobi Hussain, who runs Tuk Tuk restaurant, Eastbourne, with his wife Shalema (both pictured), branded Mr Challinor ‘a sad, pathetic, lonely man’ after he left a bad review on TripAdvisor 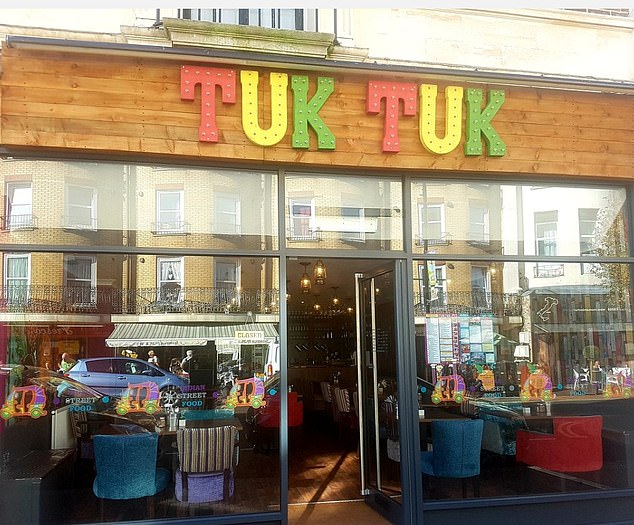 Mr Challinor visited Tuk Tuk (pictured) for two consecutive nights earlier this month. He says that he chatted with staff and while he enjoyed the food, service was slow on his second visit

‘Ate here two nights on the run as it was ok the first night,’ he wrote on TripAdvisor. ‘Novel idea with taster curries in little pots. The mutton was quite tasty. On the second night I ordered a lot of food but was totally let down by the service. I was there for 1 hour 45 mins and only spoken to twice. I couldn’t get any drinks. Just because I was there on my own it’s no excuse. I won’t go again!

Mr Hussain hit back in spectacular fashion: ‘You sad, pathetic, lonely man,’ he wrote. ‘You came on a Friday night and as we were not that busy you told the waiting staff your life story and respectfully, we listened even though we could not care less that you are a Paralympian.

‘You returned Saturday night, we were very busy and I could see from the kitchen you kept wanting to talk to our waiter but he was busy serving and making drinks for other customers so could not give you his full attention.

‘You were sat next to the bar and all night all your demands were met like ordering three times. When you finished you had a hissy fit that we didn’t treat you special.

‘Do yourself a favour mate go on a dating website find a girlfriend or a boyfriend and go to dinner with them. We are not your friend, we don’t want to hear your sad life story and I really don’t appreciate you giving us a bad review and ruining our business simply out of retaliation.’

Mr Challinor said he took up cycling following a fatal motor cycle accident almost 20 years ago, in which he collided with a pedestrian and was himself impaled on a fence post for an hour and a half.

He says the injuries he sustained have caused partial paralysis in his arm and chronic nerve pain. Unable to continue his career as a firefighter, Mr Challinor, who is from Shrewsbury, but now lives in Canterbury, says he ‘turned to drink’ before he found cycling.

His pinnacle on the bike came in 2012 when he won the British Cycling Para Road Circuit Championships. However, his health has deteriorated since then and he has only recently returned to training, clocking up 130 miles on his Eastbourne trip.

‘The staff were asking me the questions,’ said Mr Challinor, who suffers from paralysis in his arm and chronic nerve pain. ‘I was not pushing it. I wasn’t drunk. I wasn’t being funny or going on. I was decent. I was just talking to these chaps.’

Mr Hussain, 37, disputed Mr Challinor’s account of what happened in the restaurant when contacted by MailOnline and he says the row has nothing to do with his customer’s disability. 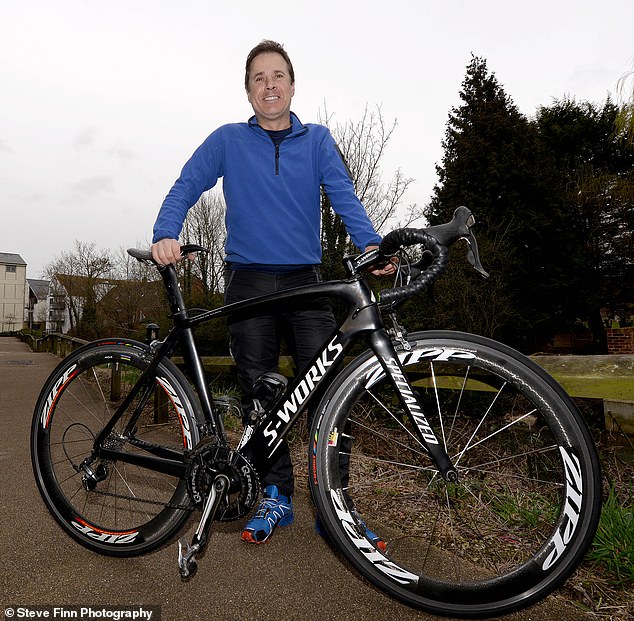 In his review, Mr Challinor said: ‘I was there for 1 hour 45 mins and only spoken to twice. I couldn’t get any drinks. Just because I was there on my own it’s no excuse. I won’t go again! 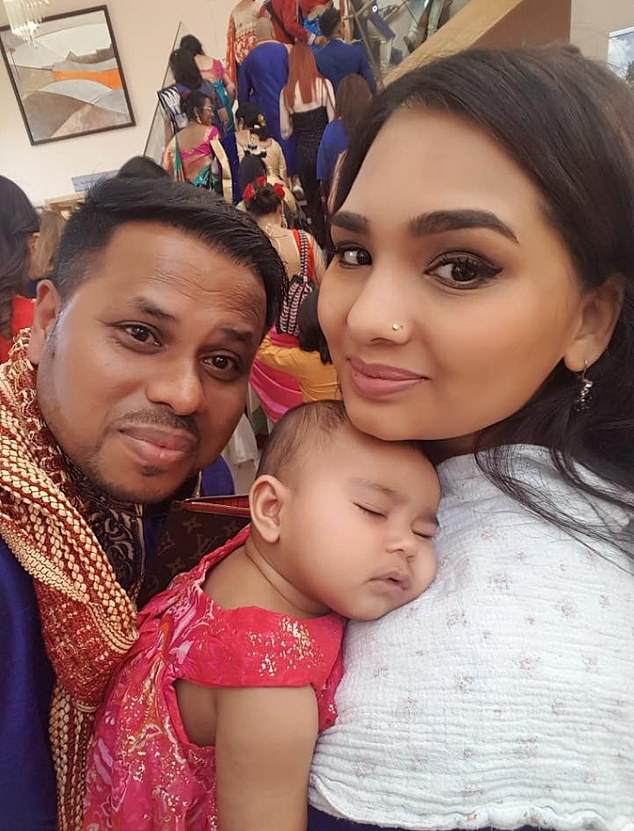 Mr Hussain, pictured with his wife Shalema, disputed the customer’s version of events. He says staff were very busy on the second night but still took the time to listen to what he was saying

‘We did not even know he is disabled, his disability is not visible,’ said the owner, who is from Eastbourne and has lived in the town all his life. ‘It is a simple dispute a restaurant and a diner. We are very upset by this, I cannot believe it is happening.’

‘This is the worst thing that has happened to me in business.’

The owner, who works there as head chef, acknowledges his TripAdvisor response was ‘brutally honest’ and he added: ‘In all honesty, I was angry.’

However, he is sticking by his account of what happened. ‘Tim was sat right next to the bar, near the kitchen, we could not ignore him,’ said the owner. ‘Our service is very good.’

He claims that Mr Challinor was ‘pestering the waiter’ and ‘he didn’t like not getting undivided attention’ before confronting waiting staff when he left.

‘This has taken a toll on us, it is the worst thing I have experienced,’ said the owner. ‘People can say whatever they like on the internet. This is not right. If anyone is the victim here, it is us, not Tim.’