Italy will reopen to European tourists from June 3 and scrap a 14-day mandatory quarantine period, the government said on Saturday, as it accelerated its exit from the coronavirus lockdown.

The move will also apply to countries in the Schengen Area, and comes as the Italian government announced plans to also lift some travel restrictions on people within the country.

Prime Minister Giuseppe Conte enforced an economically crippling shutdown in early March to counter a pandemic that has so far killed more than 31,500 people in Italy.

The Prime Minister has resisted calls from some regions to open sooner, and has instead lifted measures gradually fearing a second wave of the virus.

From the same date, regions will be allowed to reopen all sectors of the economy, providing strict safety and social distancing measures are observed.

This includes restaurants so long as customers are kept one meter apart, with staff wearing mandatory face masks. Customers will also be required to wear face masks if they are not sitting at tables.

Italy will reopen to tourists from June 3, by which point regions will also have been allowed to reopen all sectors of their economy, providing strict safety measures are followed. Pictured: Thermal cameras are use to monitor body temperature at Fiumicino airport, near Rome, May 15

Shops in Italy are set to reopen on May 18, and people will be allowed to move freely within individual regions, allowing people to visit their friends.

Italy is holding off lifting travel restrictions further until after its June 2 Republic Day in an attempt to limit any mass travel over the long holiday weekend.

The shutdown halted all holidaymaking in a country heavily dependent on the tourism industry.

Although Italy never formally closed its borders and has allowed people to cross back and forth for work or health reasons, it banned movement for tourism and imposed a two-week isolation period for new arrivals. 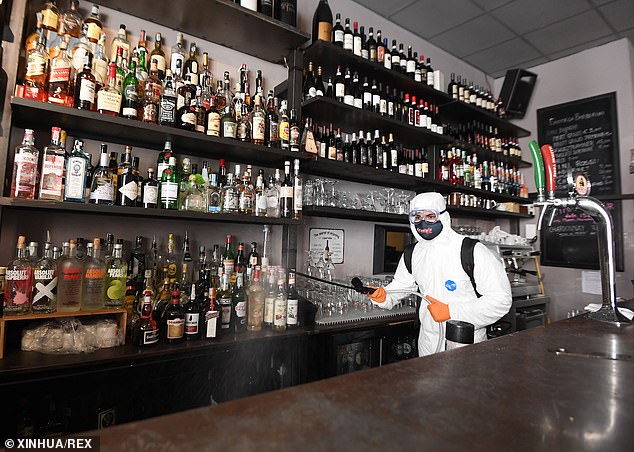 Bars and restaurants will be allowed to open by June 3. In restaurants, customers must be kept one meter apart, with staff wearing mandatory face masks, and customers wearing face masks when not sitting at a table. Pictured: A worker in a hazmat suit disinfects a Rome bar, May 16 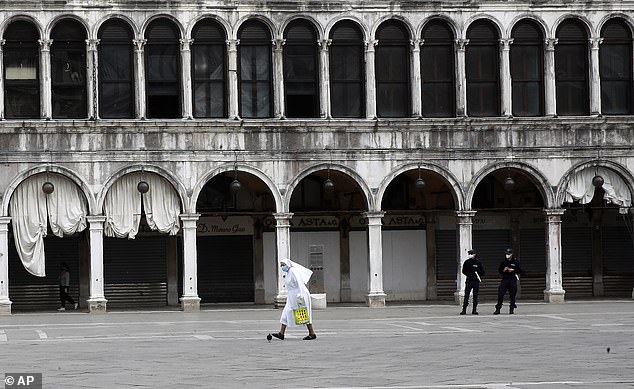 Pictured: A nun wearing a face masks walks through St. Matk’s Square in Venice, Italy, as the country prepares for the return of tourists, set for June 3

In March, the European Union banned foreign nationals from entering its Schengen zone, an open border zone comprising 22 of 27 member states, with exceptions for medical workers and essential travel.

But on Wednesday, the EU set out plans for a phased restart of summer travel, urging member states to reopen its internal borders, while recommending that external borders remain shut for most travel until at least the middle of June.

In a press release, Italy’s government did not explicitly state which foreign nationals would be allowed to enter, but said its new measures respected the ‘legal order of the European Union’.

Beginning on June 3, visitors within the Schengen zone will be allowed to enter Italy with no obligation to self-isolate. Italians will also be able to move between regions, though local authorities can limit travel if infections spike.

Movements to and from abroad can be limited by regional decree ‘in relation to specific states and territories, in accordance with the principles of adequacy and proportionality to the epidemiological risk’, the government said.

The latest decree is also a boon to Italy’s agricultural sector, which relies on roughly 350,000 seasonal workers from abroad.

Farming lobby group Coldiretti said farms were already preparing to organise some 150,000 workers from places including Romania, Poland and Bulgaria. 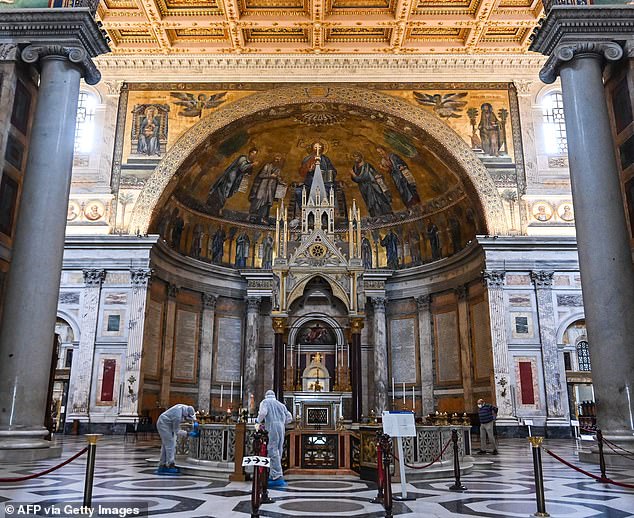 Church services will also begin again, but attendees will be required to follow social distancing rules. Holy water fonts will be empty. Pictured: Men wearing protective overalls and mask clean the floor and surfaces of the churchyard of the Basilica of Saint Paul in Rome, May 16

The peak of Italy’s contagion passed at the end of March but with experts warning a second wave cannot be ruled out, Conte had been reluctant to lift the lockdown quickly.

His approach frustrated many of Italy’s regions, with some already allowing businesses to reopen before the restrictions were lifted.

Restaurants, bars and hairdressers are being allowed to reopen on Monday, two weeks earlier than initially planned.

Shops will also open and Italians will finally be able to see friends, as long as they live within their same region.

Church services will begin again but the faithful will have to follow social distancing rules and holy water fonts will be empty. Mosques will also reopen.

Beaches in Italy also opened on Saturday, but gatherings of large groups are still banned across the nation. 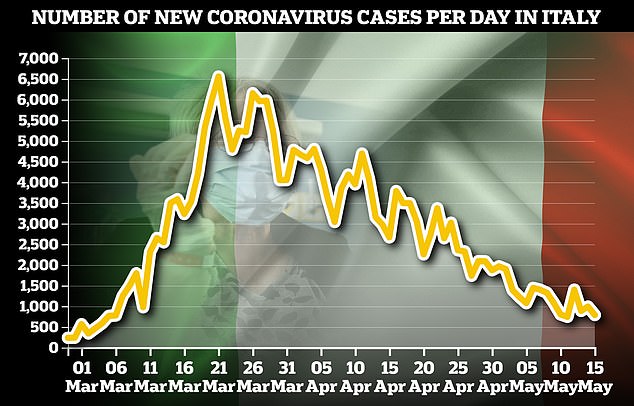 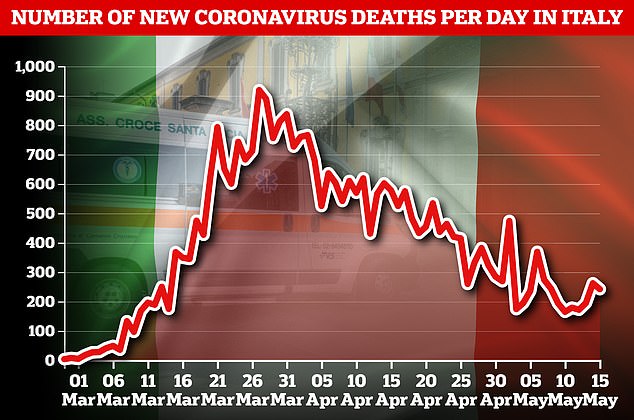