‘I’m the same as mum, I’m sorry’: Retired engineer, 88, strangled dementia-suffering wife, 85, then hanged himself after writing note for son revealing he had same condition

A pensioner killed himself and his dementia-suffering wife and left a heartbreaking note for his son saying he had developed the same condition.

The inquests into the deaths of George and Betty Lyons revealed that the 88-year-old husband had left a note in the kitchen revealing his diagnosis.

The letter left at the home in Rochester, Kent, which was addressed to his son and daughter-in-law, read: ‘I’m the same as mum, I’m sorry Simon and Lorraine.’

Mrs Lyons, 85, had suffered with dementia for several years, but the inquest heard that it appeared her husband had been recently diagnosed with the same condition.

The coroner at Archbishop’s Palace in Maidstone heard that Mrs Lyons, a retired librarian, had been killed by compression to the neck and ruled it an unlawful killing.

Mr Lyons, a retired mechanical engineer, was killed by suspension and killed himself. The couple were discovered in their home on April 21.

Their son Simon paid tribute in the hearing, saying: ‘They were devoted to each other.’ 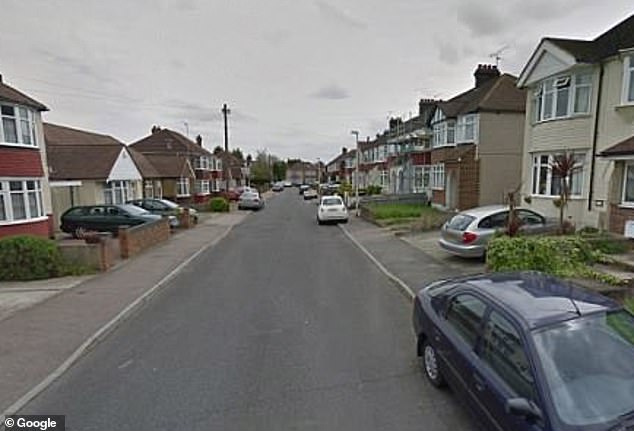 The letter was left in the kitchen at the couple’s home on this road in Rochester, Kent

Speaking after their deaths, one neighbour, said: ‘I am in shock. They were a lovely couple and used to hold hands when they went out together.

‘I understand she had been ill for some time and he has been trying to cope with that. I am sure she went into a home at some point.’

For confidential support in the UK, call the Samaritans on 116123 or visit a local Samaritans branch. See samaritans.org for details.