Retired policewoman Barbara McArthur, from Cardiff, turned back the clock to catch a rogue window cleaner burglar who was targeting elderly victims

A 90-year-old retired policewoman turned back the clock to catch a rogue window cleaner burglar who was targeting elderly victims.

Conman Jonathan Tawse, 28, met his match when he called at the home of Barbara McArthur.

He offered to clean her windows for £5 but then claimed to have fixed a leak above the door which would cost another £50.

Tawse then left and handed Mrs McArthur and her son, Howard, a leaflet to say he would return to carry out more work.

However the eagle-eyed ex-officer spotted an appeal from police for information about Tawse and his father, Michael, wanted for a string of cons.

She immediately contacted police and gave a detailed description to officers to help catch the pair.

The father and son are now both in jail for their crimes.

A court heard Tawse first stole £2,000 cash from a partially sighted pensioner after offering to clean her windows with his father Michael, 51.

However when they got inside her house Tawse claimed he needed to go to her bedroom because there was a crack that needed repairing.

Prosecutor David Pugh said: ‘Tawse entered the kitchen to fill up his bucket and she was aware of a second person on a ladder.

‘She could hear a conversation in her hallway but not what was being said.

‘He then led the victim up to her rear bedroom and pointed out a crack he said needed repairing.

‘When she went to bed later in the evening she found her bedroom wardrobe was open and £2,000 in cash kept in an envelope had been stolen.’ 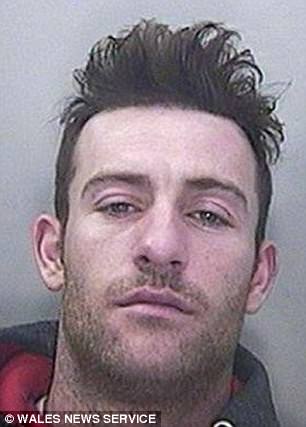 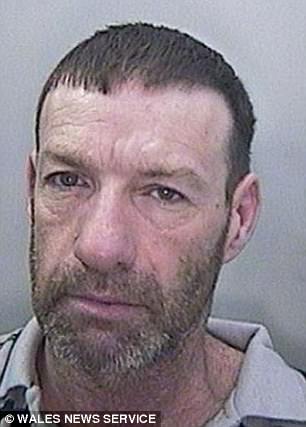 Tawse then moved on to his next victim, not realising Mrs McArthur was a retired police officer.

Recalling the incident, she said: ‘They knocked the door and said ‘we’re window cleaners’ and could they do our windows for £5. I said OK because I was in a silly generous mood and I thought I’d give them £10.

‘I left them to clean the windows and they knocked the door again and the older one said he had to come through for water.

‘I stood in the doorway when he went to the kitchen where I could see him and the open door. He filled the bucket and walked out.

‘They then knocked the door again and the younger one, who did all the talking, said there was a leak above the door and he could repair it for £50.

‘Once he had done that he told us we had cracks under the window and he wanted to have a look at them inside. Howard went up with him and he went straight to my bedroom but Howard showed him round the front.’

After leaving the property, the younger Tawse returned later the same day and the next day, saying he could repair the cracks for £200 and subsequently reduced his price to £85 and then £35.

The rogue cleaner then handed her Mrs McArthur a leaflet which she kept.

This helped police track down the father and son. 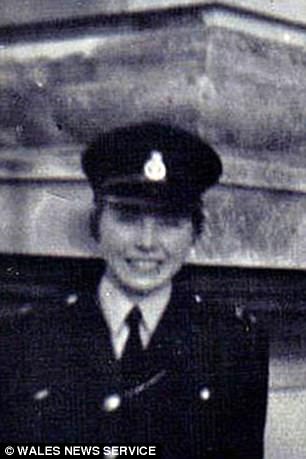 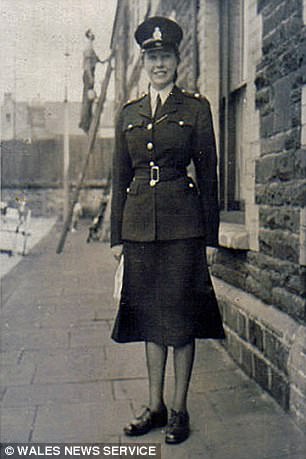 Barbara McArthur, pictured, as a police officer for South Wales Police in the 1950s

Tawse (junior) went on the run but was finally arrested last month.

He was jailed for three years and four months after pleading guilty to burglary.

His father Michael was jailed for three years in April after he pleaded guilty to burglary.

After the pair were jailed, Mrs McArthur said: ‘It’s the lowest of the low. You meet occasional villains and most of them are not too bad but what they did was inexcusable.’

‘The son was a chap with talent. He could talk the hind legs off a donkey.

‘I’m sorry they can’t lock them up for life for the safety of other people.’

Mrs McArthur started working as a policewoman in 1950 for South Wales Police in Cardiff city centre and worked there for three years before becoming a social worker for 30 years.

She eventually left work to care for her elderly parents, who died in 1993. She also brought up son Howard, 63, who is autistic.

A spokesman for South Wales Police said: ‘We sincerely thank Barbara and her son Howard for their help with this case. A real team effort.’