A retiree who fell in love with a German backpacker 39 years his junior and later became one of Australia’s oldest fathers says his family keeps him young at heart.

Kevin King, then 66, first met Katja, 27, at a caravan park in early 2007 after being told by doctors he had three years to live.

The pair initially bonded as friends as they travelled Australia together before love blossomed over the following months, which led to a proposal and marriage two years later.

He made headlines as one of Australia’s oldest new fathers at the time when his wife, then 31, gave birth to son Pierre the following year in 2010. 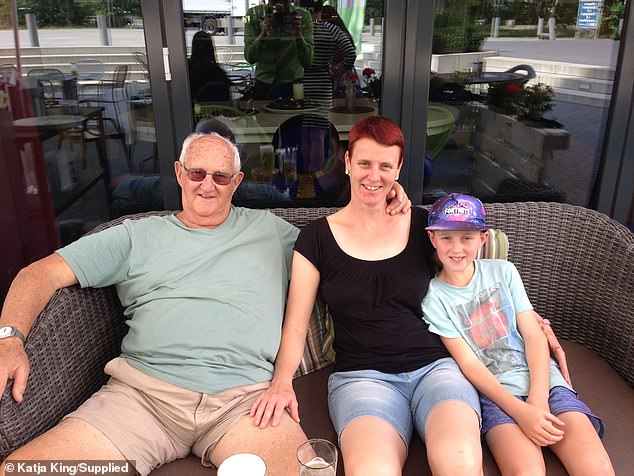 He does his best to keep up with the active youngster, despite numerous health complications in recent years, including emergency heart surgery.

‘When Pierre was born, my ambition was to still be around when he turned five,’ Mr King told Daily Mail Australia.

‘He’s now nearly 10 so now, I want to stick around and see him finish school.

‘He keeps me on my toes and keeps me alive and young.’ 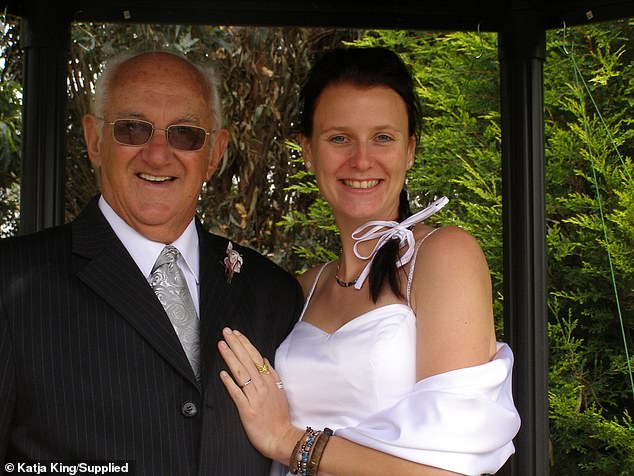 Katja was in her 20s when she met 66-year-old Kevin King in 2007. The couple married two years later (pictured on their wedding day) and are still together, despite a 39-year age gap

Mr King was against becoming a father again when Katja first raised the subject of having children but had a change of heart.

‘I said no straight away as doctors had told me I only had a few years left,’ he recalled.

‘But I went back to my doctor who said to keep doing whatever I was doing as it had given me a new lease on life.’

His wife told Daily Mail Australia: ‘Kevin said the odds were stacked against him because of his age and that falling pregnant had to happen naturally or not at all, which took over a year.

‘Seeing the strong bond they share is an absolute joy – there’s no other words to describe it.’ 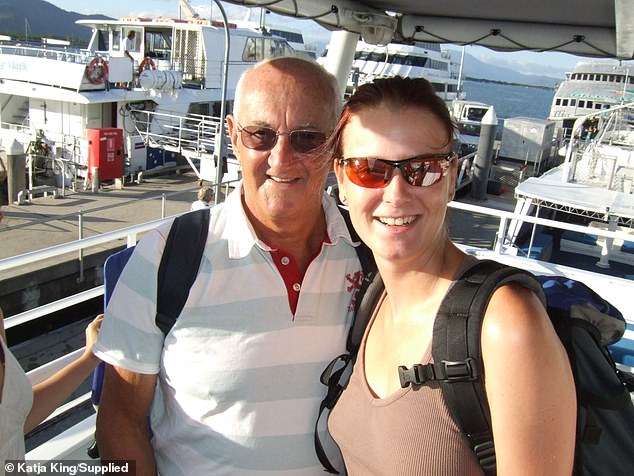 Kevin King sold the restaurant he was running and went travelling around Australia, where he met and eventually fell in love with young German backpacker Katja (pictured together) 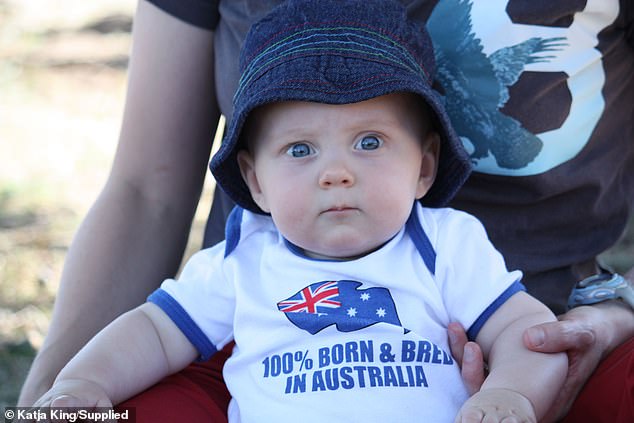 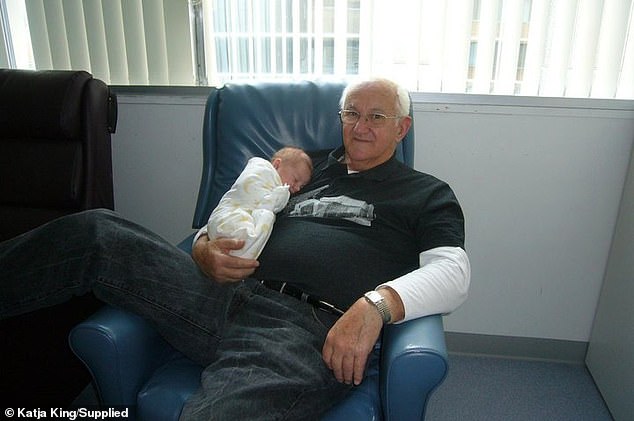 The Kings were featured on a SBS Insight episode about older parents in 2016, where Pierre, then aged six, described his dad as ‘the best one in the whole wide world.’

‘I think every day, every year I have is a blessing for Pierre. My main worry is to make sure that if anything happens to me that Katja and Pierre are financially good. We’ve got a beautiful home, everything’s sort of sweet,’ Mr King told the program at the time.

His wife believes having an elderly father has shaped her son into the boy he is.

‘Pierre is the most patient, considerate and helpful child you could ever meet,’ Ms King told Daily Mail Australia.

‘He knows there are things his dad can’t do with him such as run or ride a bike.

‘He’s the first one to run over and help his dad when he needs a hand with something. It’s the same when he sees an elderly person drop something in the street.’ 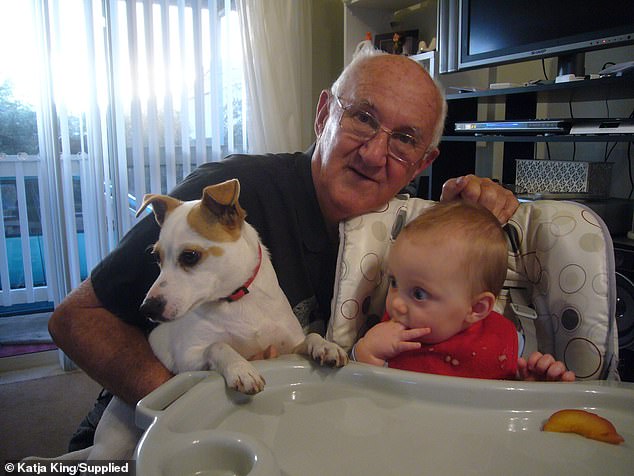 The septuagenarian, now 79, can’t imagine life without his son Pierre (pictured as a baby) 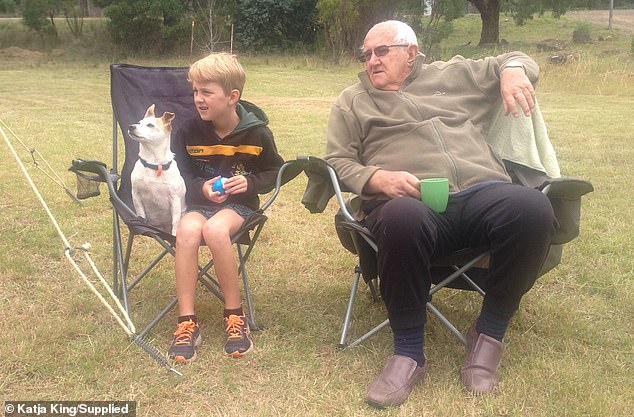 Despite being an older father, Kevin (right) shares a close bond with his young son Pierre (left)

She admits the prospect of becoming a young widow remains a fear, especially after her husband was hospitalised 17 times in the space of seven months two years ago.

‘I knew that right from the start and it’s on the back of my mind on a regular basis,’ Ms King said.

‘We nearly lost him him a few years ago when his heart failed and had to have emergency surgery – that was a tricky time.’

‘He turns 80 next year but he still has his driver’s licence and runs the canteen at Pierre’s Little Athletics sessions.

‘We also still have the caravan and go camping every Christmas.

‘Anything can happen and you never know when your time is up. I could be the one who’s the first to go.’

Ms King says there was romantic connection when the couple first met and initially refused when Mr King invited her to join him on his travels around Australia.

‘I thought it was an odd question to ask a stranger he’d just met,’ she recalled.

‘But I was by myself and thought, why not.’ 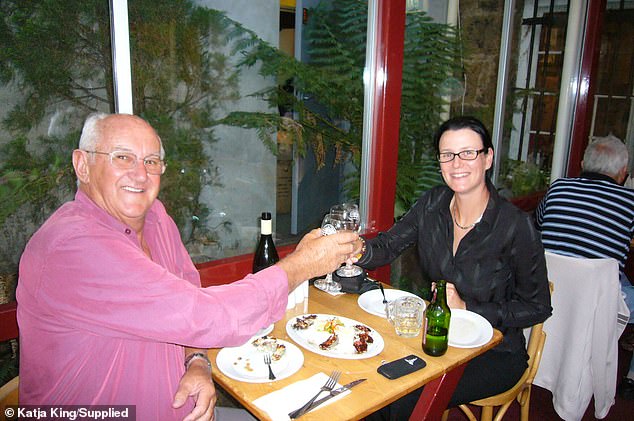 The couple were travel companions before love blossomed. They’re pictured while travelling 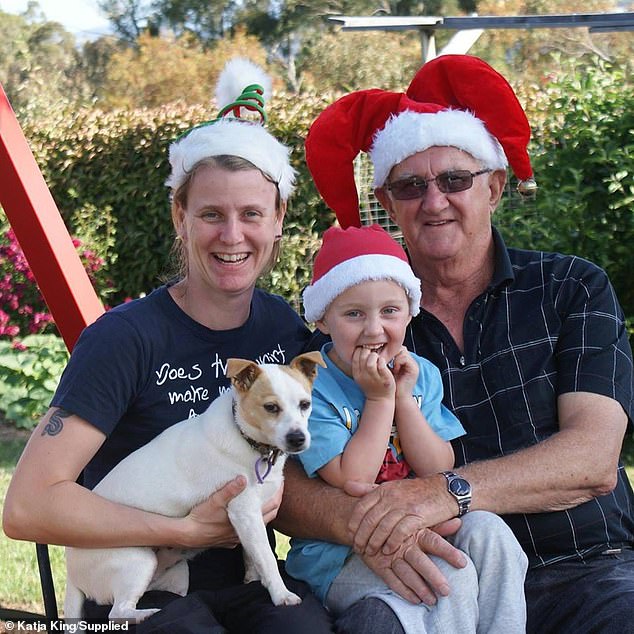 Kevin and Katja King (pictured with their son Pierre in 2014) got a dog while trying to fall pregnant, which took over a year. The dog is still a part of the family 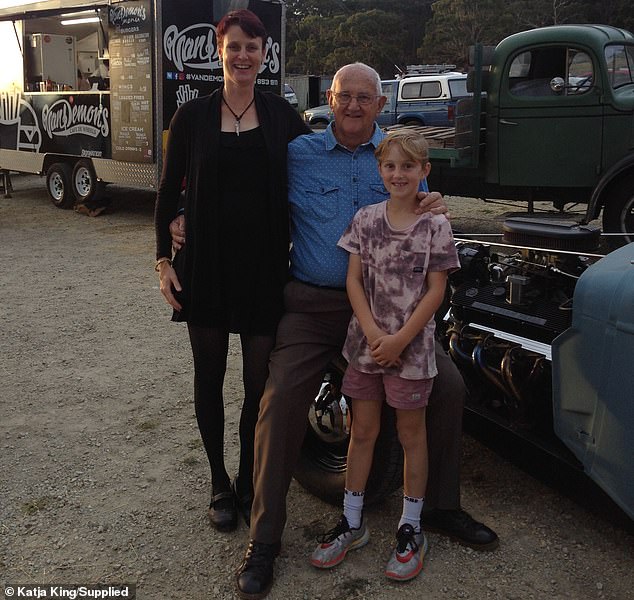 The 39-year age gap has never been an issue for Ms King, who’s 14 years younger than Kevin’s eldest daughter.

‘You love someone as a person, not their age,’ she said,

‘Of course it gets challenging but you pull through it.’

‘We still have a lot of fun and love each other. The only difference is that life has gotten busier with Pierre.’

‘I couldn’t ask for a better husband or dad for Pierre.’

The couple are used to people’s assumptions that she’s Mr King’s daughter and their son is his grandson.

‘We used to get a lot of stares when we kissed in public but I’m not bothered as they’re the one with a problem with it,’ Ms King said.

Her husband added: ‘Everyone in Tasmania knows who we are now anyway.’ 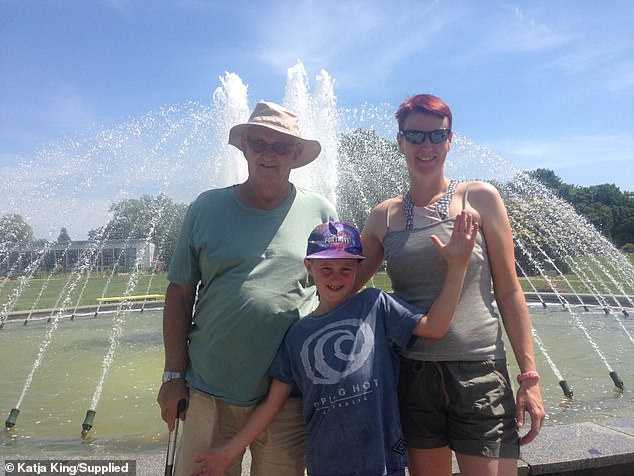 ‘Pierre is the most patient, considerate and helpful child you could ever meet,’ Katja King (right) told Daily Mail Australia. She’s pictured with her husband and son