Returning the ‘Elgin Marbles’ to Greece would be a ‘very dangerous and slippy road’, according to Culture Secretary Michelle Donelan.

The Cabinet minister suggested handing back the 2,500-year-old sculptures would spark a wave of demands for the return of other artefacts held in Britain.

‘Where does that end?,’ asked Ms Donelan, as she highlighted how the law currently ‘does not allow’ historical objects to leave the UK apart from in certain circumstances.

It recently emerged that George Osborne, the former chancellor who is now chairman of the British Museum, has been holding talks with Greece’s prime minister over the possible return of ‘Elgin Marbles’.

Also known as the Parthenon sculptures, they were made between 447BC and 432BC and decorated the Parthenon on the Acropolis in Athens.

Lord Elgin removed about half of the remaining sculptures from the ruins of the Parthenon between 1801 and 1805, before they entered the British Museum.

These have since been the subject of a 200-year-old dispute over ownership between Athens and London.

Downing Street this week ruled out changing legislation that would prevent the British Museum from handing the sculptures back to Greece.

And, appearing before the House of Commons’ Digital, Culture, Media and Sport Committee, Ms Donelan signalled her own opposition to their return to Athens. 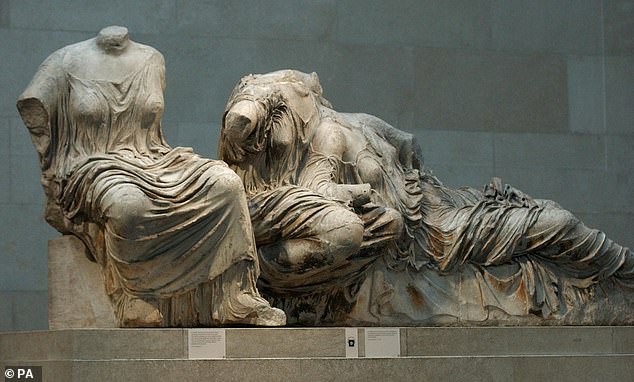 Lord Elgin removed about half of the remaining sculptures from the ruins of the Parthenon between 1801 and 1805, before they entered the British Museum

‘I think George Osborne’s position is a little bit different to has been portrayed,’ Ms Donelan told MPs.

‘But there are some people that are strongly advocating to return some of these items permanently. The current law does not allow that, it should be acknowledged.

‘I can completely understand the position that they are taking and I can sympathise with some of the argument. But I do think that is a very dangerous and slippy road to embark down.’

The Culture Secretary added that Britain had ‘taken great care’ over artefacts held in the country’s museums ‘for decades’ and had conducted ‘considerable’ research into historical items.

She told the committee: ‘Once you start giving one back, where does that end?

‘It’s also very difficult to know who to give these things back to. We’re talking about very ancient items in many respects.

‘There are certain examples where it is not clear over exactly who the owners are. And others where I would argue it is more clear that we have a direct link to ownership.

‘But, certainly, I think the current status quo is working and we should protect it.’ 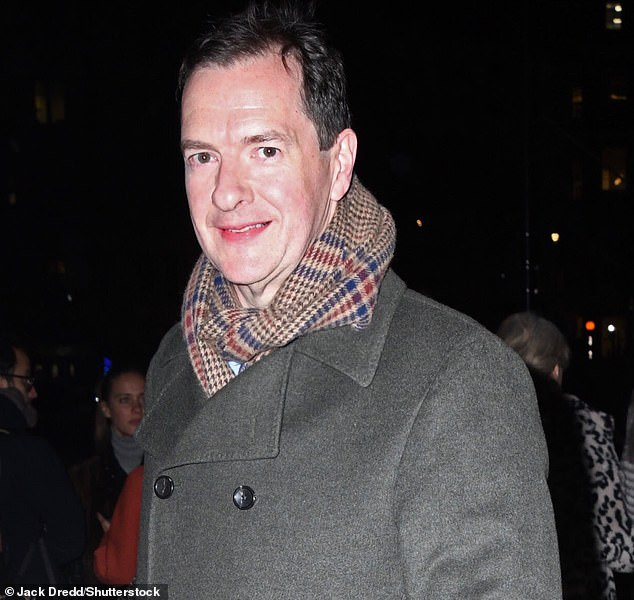 George Osborne, the ex-chancellor who is now chairman of the British Museum, has been holding talks with Greece’s PM over the possible return of the sculptures

No10 this week said there were no plans to amend legislation that prevents objects being removed from the British Museum’s collection, apart from in certain circumstances.

The Prime Minister’s official spokesman said: ‘We have no plans to change the law, which prevents removing objects from the British Museum’s collection, apart from in certain circumstances.

‘Our position on this hasn’t changed. Decisions relating to the care and management of the collections are a matter for the Museum and its trustees.

‘The Parthenon Sculptures are legally owned by the trustees and operationally independent of the Government.’

No10 also claimed the public would ‘vote with their feet’ if they dislike museums removing controversial objects from their collections.

They are also said to have first held ‘exploratory talks’ in November last year at the Greek ambassador’s Mayfair residence.

The British Museum has not denied Mr Osborne had held talks with the Greek premier.

A spokesperson said: ‘The British Museum has publicly called for a new Parthenon partnership with Greece and we’ll talk to anyone, including the Greek government, about how to take that forward.

‘As the chair of trustees said last month, we operate within the law and we’re not going to dismantle our great collection as it tells a unique story of our common humanity.

‘But we are seeking new positive, long-term partnerships with countries and communities around the world, and that of course includes Greece.’