Emily Duggan swapped her smart office wear for a racecar driver’s suit four years ago and has been ferociously blazing the trail for females in motor sport ever since.

The 27-year-old made history as the first woman to get behind the wheel in the Toyota 86 Series at the Maiden SuperSprint held at Tailem Bend, 97km southeast of Adelaide, last weekend.

The achievement was proof her life-altering decision to quit her career as an executive assistant was well worth the risk.

The self-confessed rev-head said she thrived on the speed-induced thrill of going head-to-head with the fastest young drivers in the country in three races on the brand new five-kilometre circuit.

Speaking with Daily Mail Australia, Duggan said she had never felt more at home than flying around the track at speeds up to 215km/h in a car she practically built on her own.

Piecing together her own vehicle, affectionately named Lulu, was crucial because it meant she could detect a blow-out in any part of the car through a feeling in her butt cheeks, Duggan said.

‘I drive with my bum, through your bum you can feel all the tyres, it’s the weirdest thing! In a spin out, I’m able to feel the tyres slipping with my butt first.’

She said having a team do the hard yards wouldn’t allow for such awareness – and doubt certainly wasn’t a feeling she could afford to harbor given how technical the sport was. 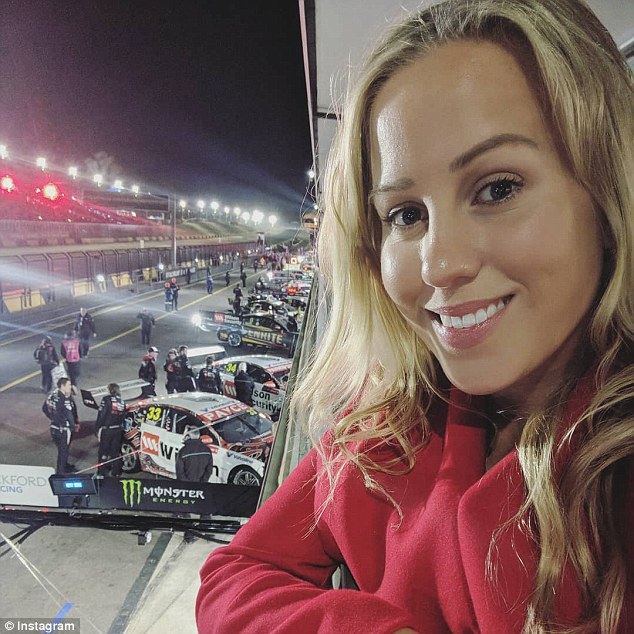 ‘If someone else builds the car, you don’t always know exactly what you’re getting, so I want to put myself in the best possible situation to get those results.’

‘I love getting my hands dirty, I love everything about cars, and I feel to be a great driver, the more you know about how a car works and what’s involved in it, the better driver you can be.’

Being female in a male-dominated sport had obviously set her apart from her competitors, but the star racer said it was something she hardly gave a second thought.

‘The only thing that’s different is that I go to the bathrooms to get changed, everyone else just gets down to their jocks. That’s the only difference,’ she said.

‘I wish there was more chivalry on the track, like ladies first, but unfortunately not!’ 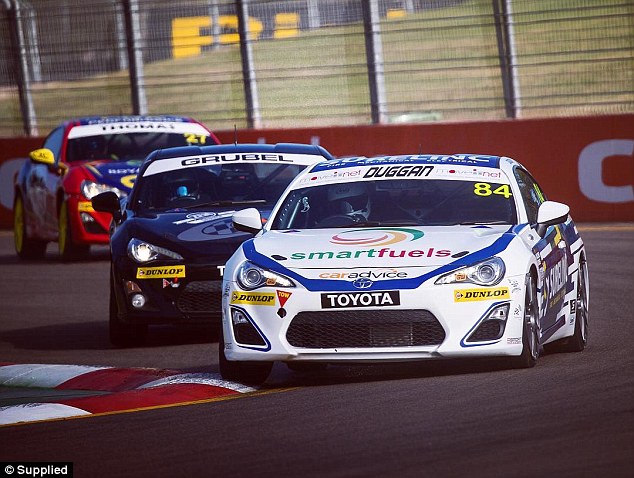 While conquering the 86 competition has become Duggan’s (pictured at Townsville Street Circuit) first order of business, she hoped to be in a position to enter the V8 Supercars soon 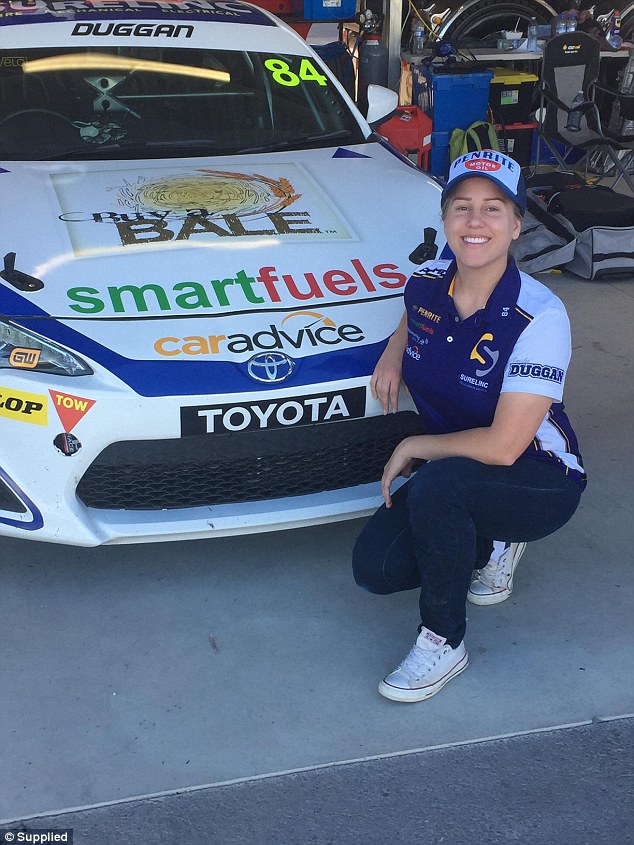 Duggan (pictured with her car, Lulu) said being female in a field of males was something she hardly gave a second thought

When Duggan saved up enough money to enter the expensive world of racing, she kept it secret for a while, telling friends the savings were for a deposit on a home.

Little did they know she would soon become one of Australia’s leading ladies in motor sport – earning several podium finishes, including a win in the one-hour endurance race in the Series X3 NSW category in 2016’s V8 Touring Car event.

Racecar driving by no means has been a cheap sport to get involved in – Duggan said she spent at least $60,000 preparing for her maiden Toyota 86 Racing Series.

‘One hundred per cent it was all worth it, I’m always learning, even when the weekend doesn’t go my way, I’m taking away a lot of lessons,’ she said.

‘Most of these guys have been racing three years, but this is only my first, and my second race, so you really have to remember that.’ 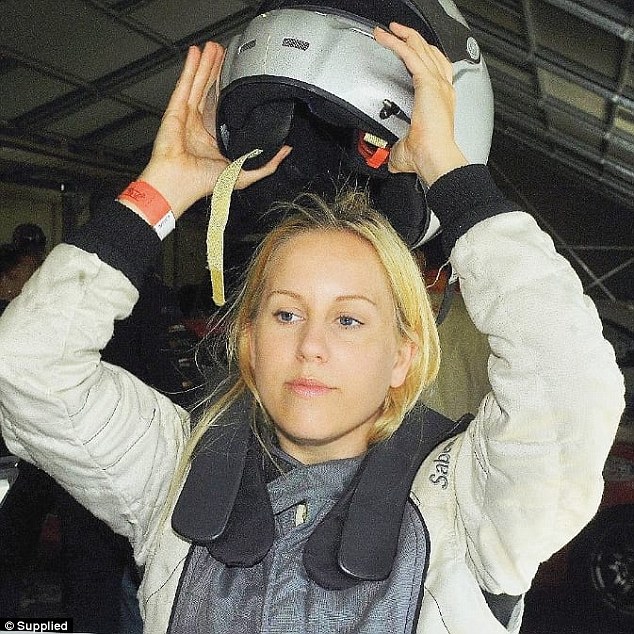 When Duggan saved up enough to enter the expensive world of racing, she kept it secret for a while, telling friends the savings were for a deposit on a home

The Toyota 86 Series is designed to offer an affordable introduction to racing using a slightly modified version of the company’s 86 road model.

While she missed out on a podium finish in the weekend’s race, Duggan said she hoped to be in a position to enter the V8 Supercars in the not-too-distant future.

‘If I can get some really good results in the next race. I’ll probably do another year of 86s to sharpen everything, then move my way up, but it all depends on sponsorship.’

Off the back of her first big weekend of 86 racing, she said she’ll be upping her time in the gym and ramping up her mental game with the help of a professional.

‘I’ve got a mental coach that’s come on board for this year just to make sure that I’m mentally prepared for these races, because these boys race hard and they are competitively tough.’ 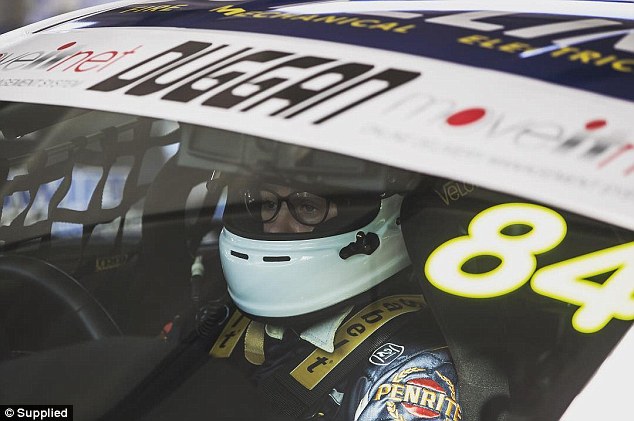 Many would consider it daunting being in a field of 38 racers all with the common goal of claiming pole position, but that was definitely not the case for Duggan.

‘I think if I did get scared, I shouldn’t be out there. For some reason I feel so safe in the car and I think that’s the fact we have to have certain safety measures in place.’

Her message to other women contemplating motor sport was they should ‘just do it’, but make sure it was 100 per cent what they wanted to do.

‘I hate that I didn’t get into it earlier…I thought that it was a boy sport. I always thought I wanted to do it, but never did anything about it.’ 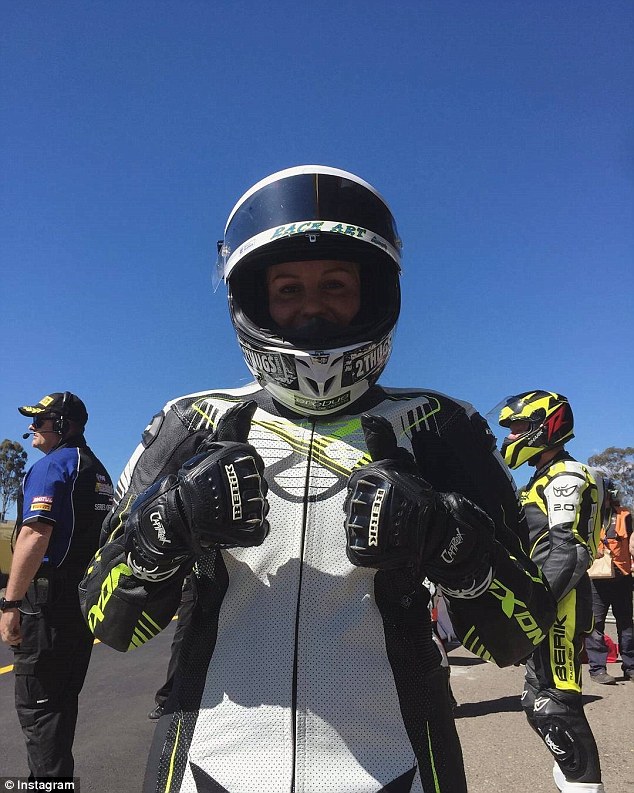