The music festival raged on into its second and final day at Brownlow Hill Loop Road at Camden on Saturday, coming off the back of a successful first day that drew upwards of a 4,000 strong crowd.

Glitter was the leading choice of dress for revellers who decided to bear almost-all under the sun.

Other cheeky festival-goers opted in for skimpy, colourful and jaw-dropping outfits that left little to the imagination.

Some channeled their spirit animals and dressed as mythical creatures, while others simply refused to be put into a box and brought their own take on what it means to dress adventurously.

But behind the glamour and tacky glitter of the festival was an overwhelmingly huge police presence.

It comes after two New South Wales festivals blamed what they called a government ‘war on festivals’ for leading them to cancel their events due to overly strict regulations. 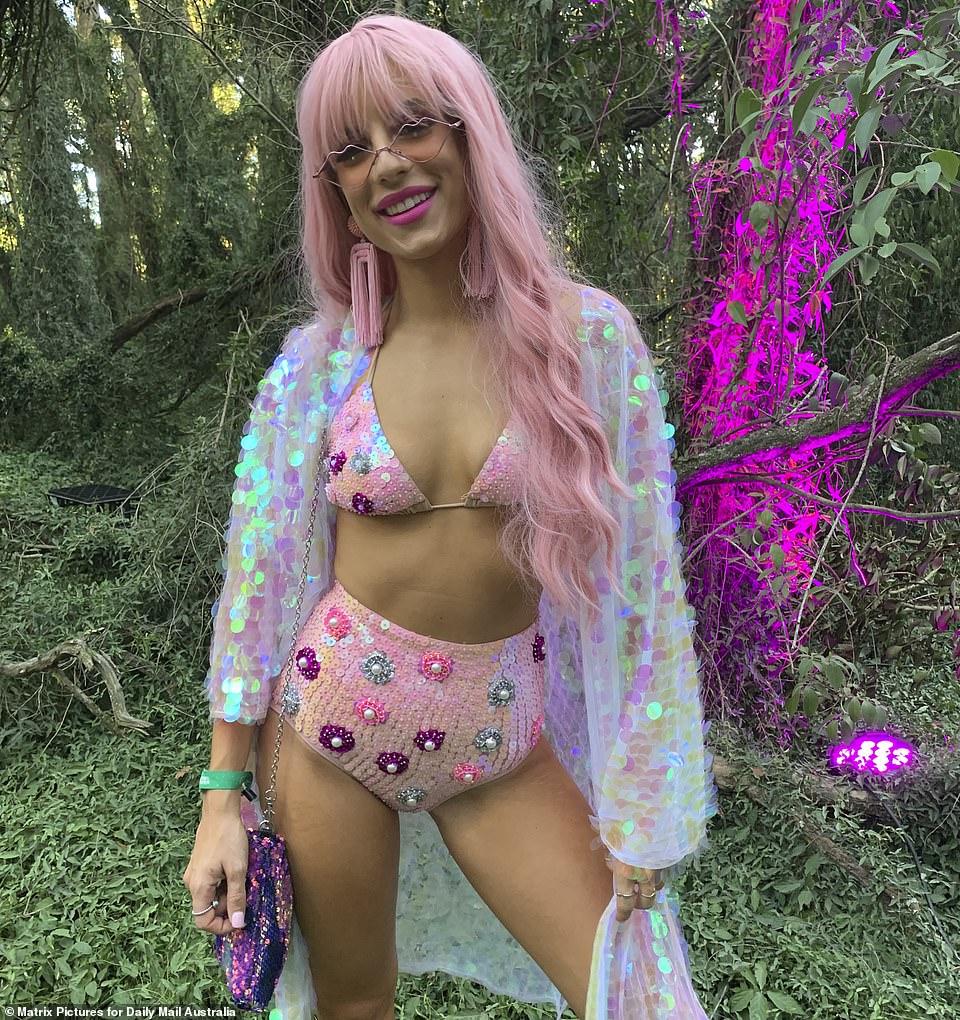 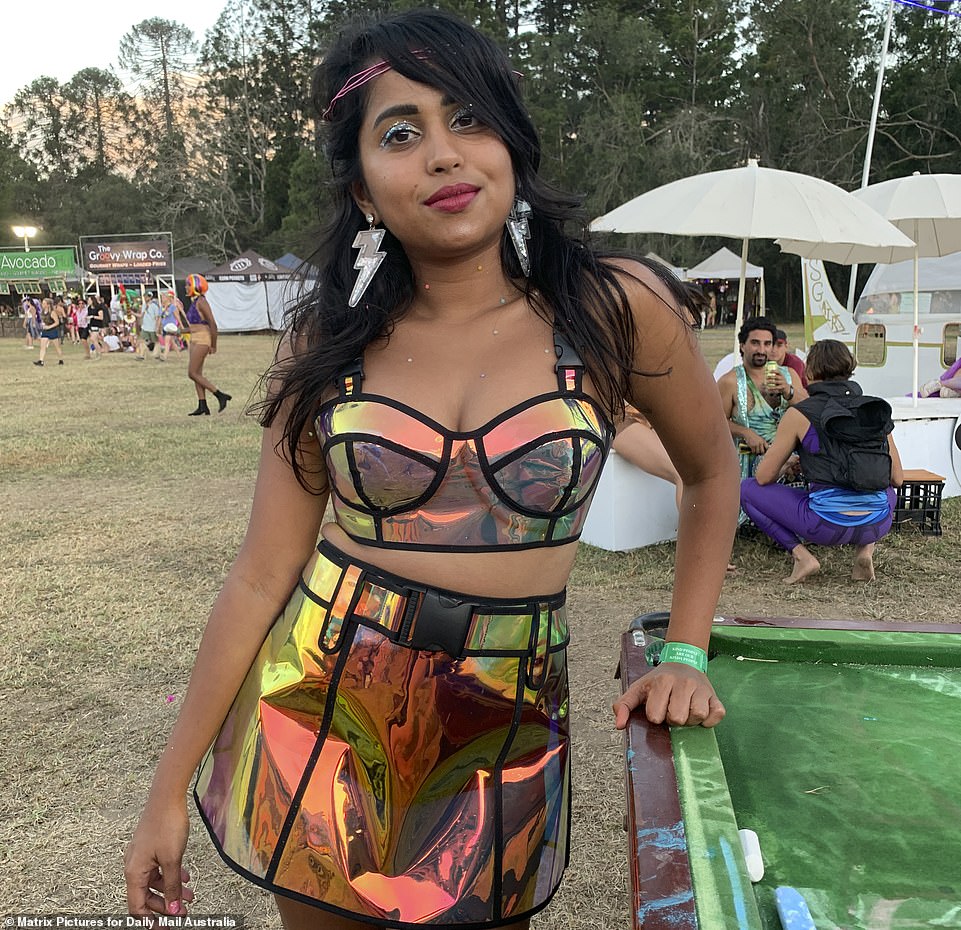 If Wonder Woman met her alternate self at a music festival this is what she would look like. Glitter was the leading choice of dress for revellers who decided to bear almost-all under the sun 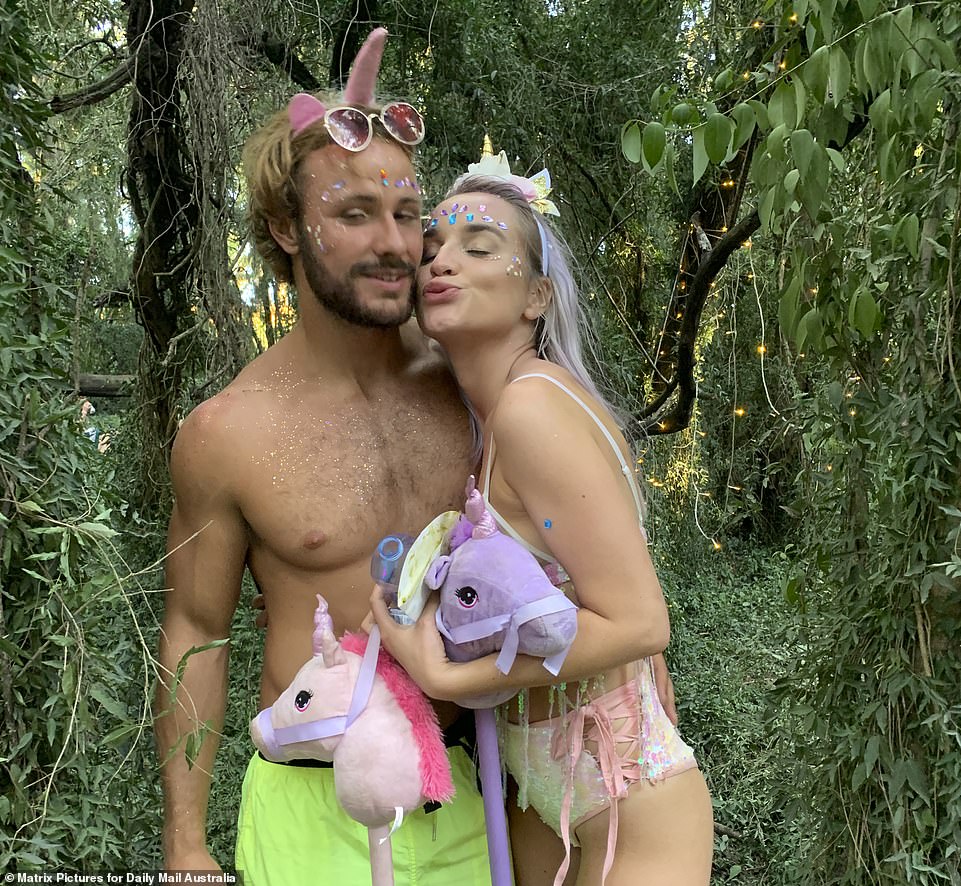 This pair channeled their spirit animals and dressed up as unicorns. Other cheeky festival-goers opted in for skimpy, colourful and jaw-dropping outfits that left little to the imagination 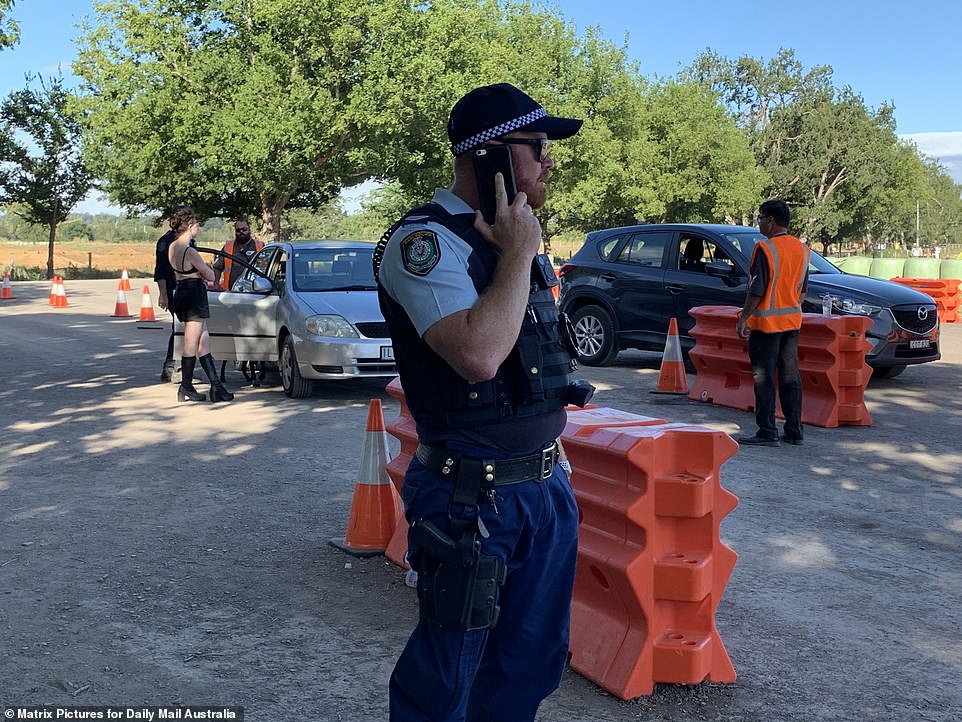 Officers were in full force at the grounds and targeting anti-social behaviour, alcohol related crime and liquor licensing legislation.

The high visibility police operation came as the NSW Government released its list of 14 ‘high risk’ festivals that would have to adhere to its new licensing scheme from March 1.

Music festivals that are deemed ‘high risk’  will be subject to tougher new government regulations.

Four of the festivals included on the list also had party-goers die of suspected drug overdoses in the past six months. There is no suggestion anyone pictured in this article has taken drugs or done anything wrong.

‘The NSW government wants music festivals to thrive – but serious drug related illnesses and deaths have demonstrated that we need to help make a small number of them safer,’ NSW Racing Minister Paul Toole said in a statement on Saturday. 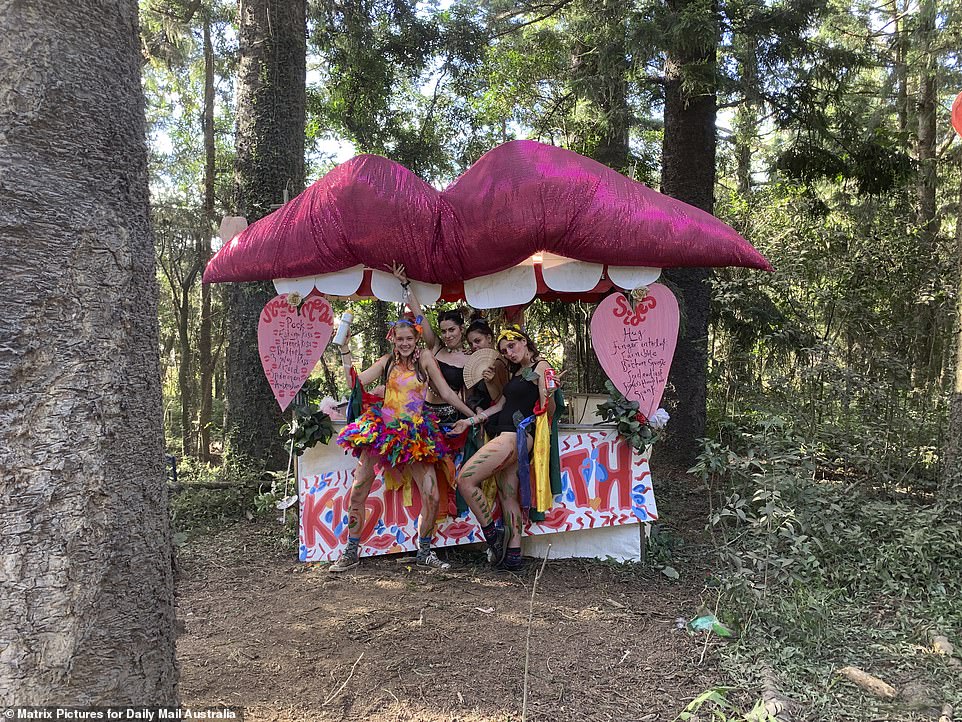 Pucker up: This group of revellers take it upon themselves to set up the festival’s unofficial kissing booth 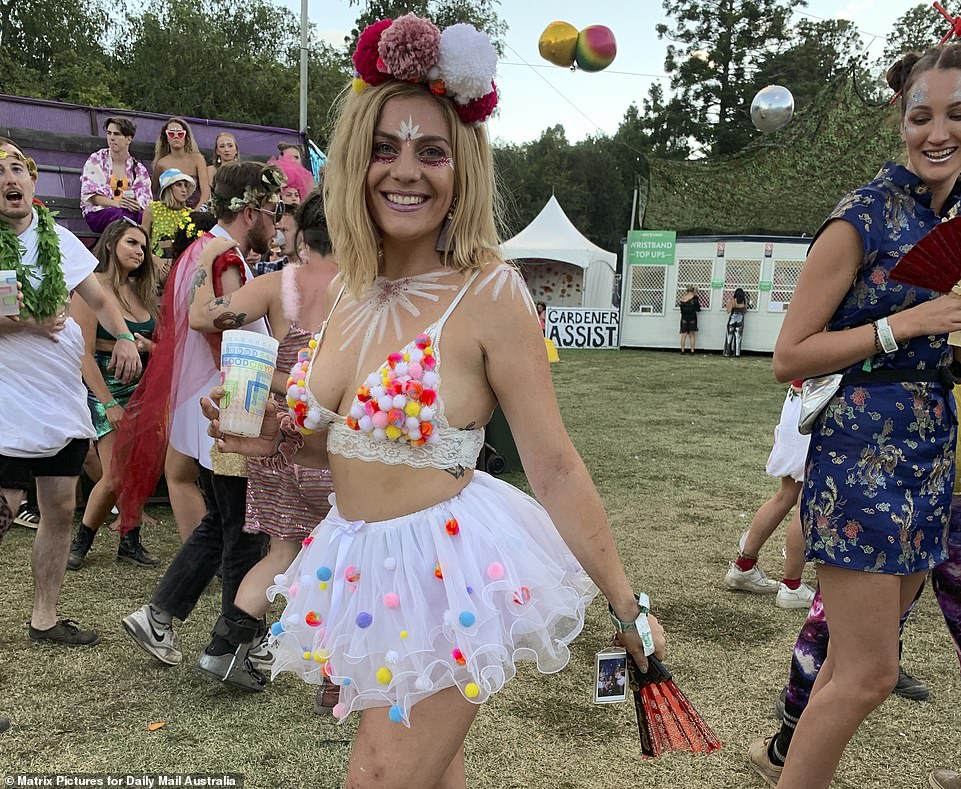 One would get the impression this reveller loves pom poms. Music festivals that are deemed ‘high risk’ will be subject to tougher new government regulations 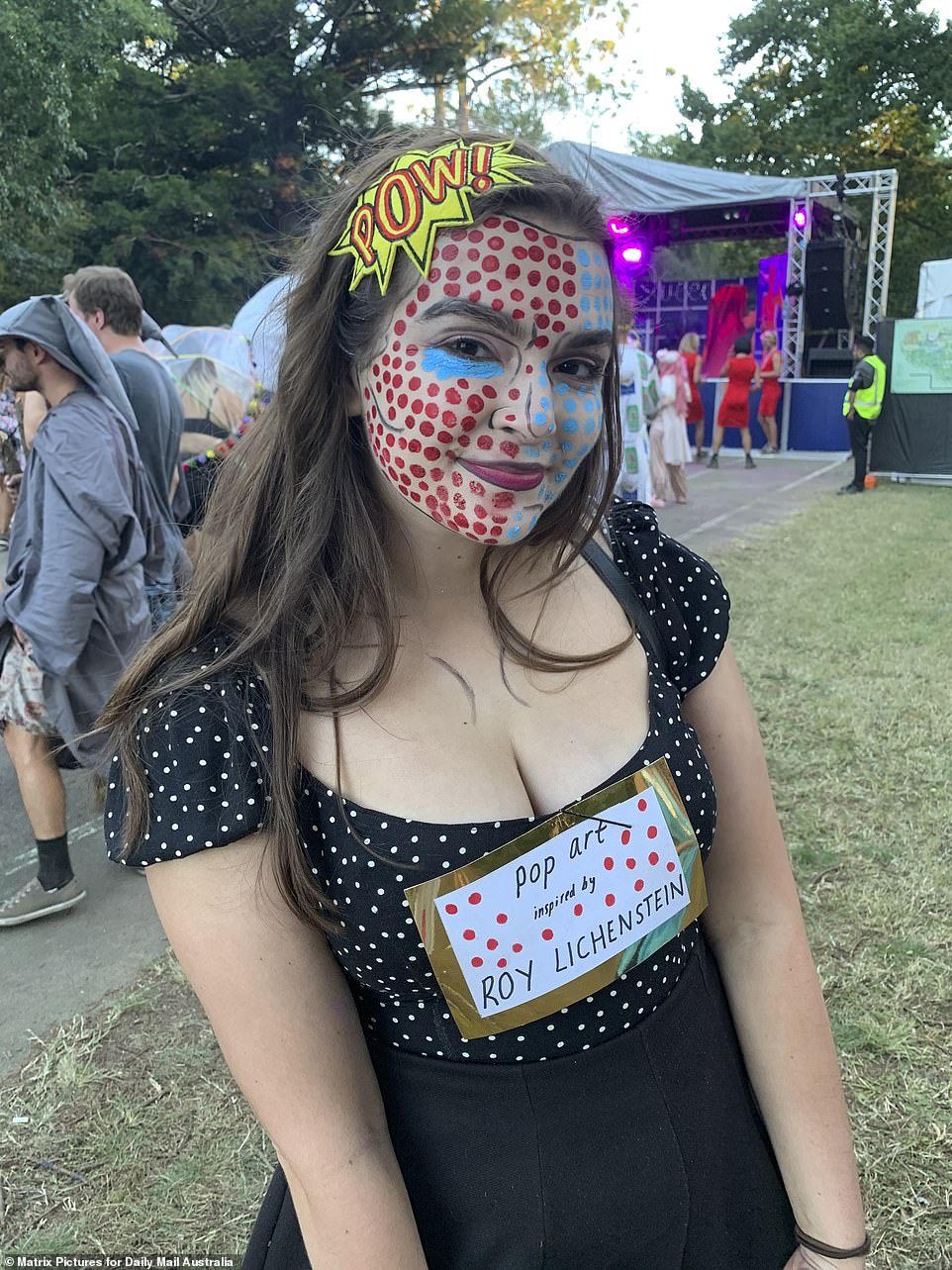 Pow! This reveller mixes pop art with graphic novels to create an outfit that simply deserves a category of its own 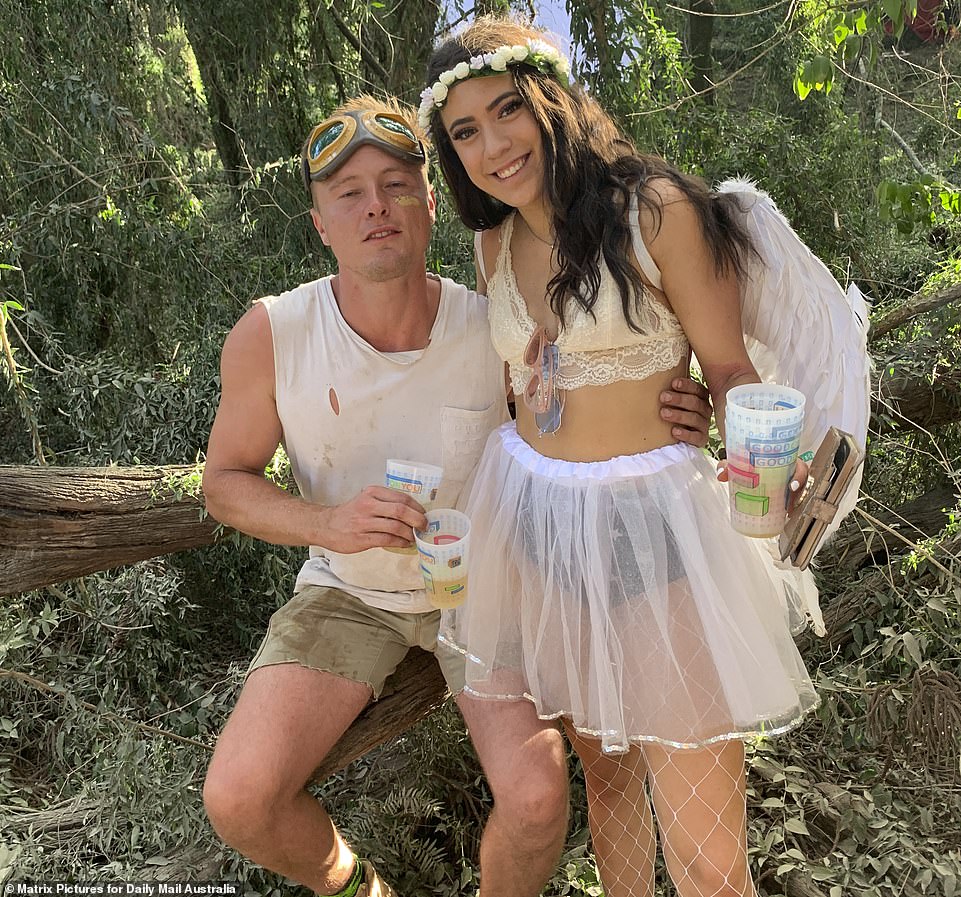 An angel from heaven: Some channeled their spirit animals and dressed as mythical creatures, while others simply refused to be put into a box and brought their own take on what it means to dress adventurously 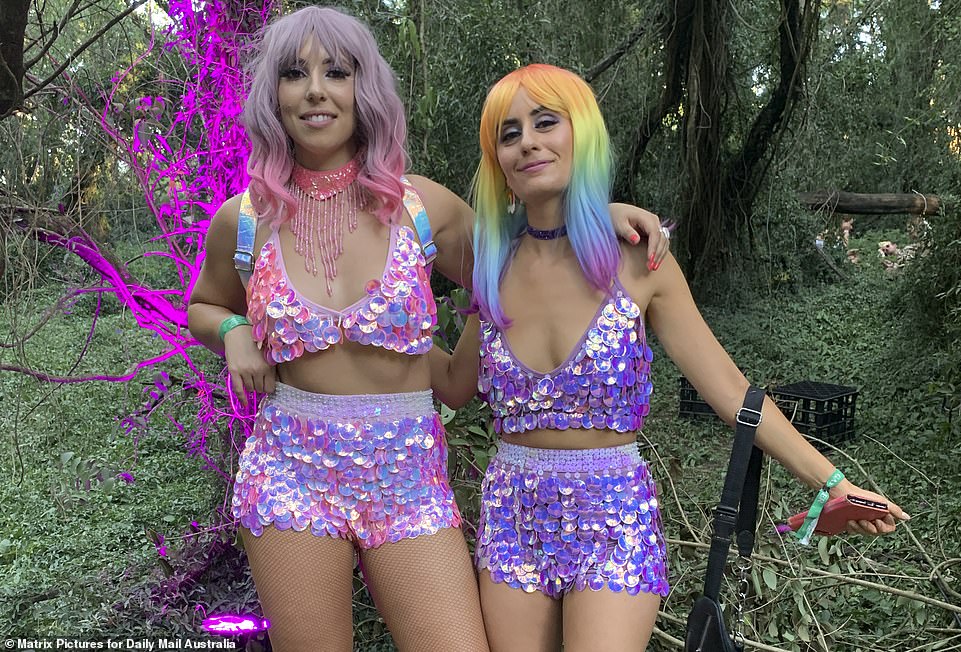 Twinning costumes on point! Meet the sequin sisters. The music festival raged on into its second and final day at Brownlow Hill Loop Road at Camden on Saturday, coming off the back of a successful first day that drew upwards of a 4,000 strong crowd 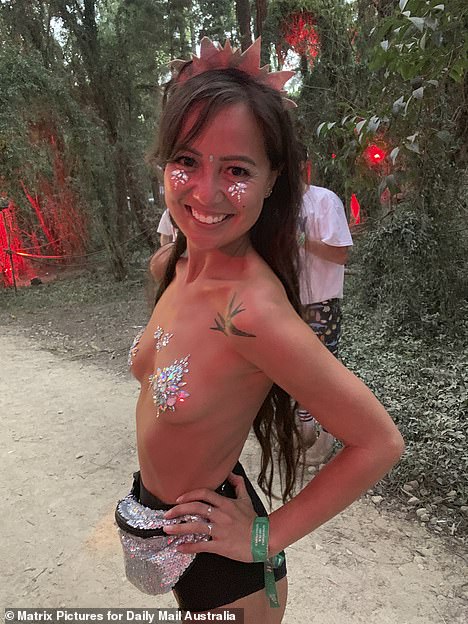 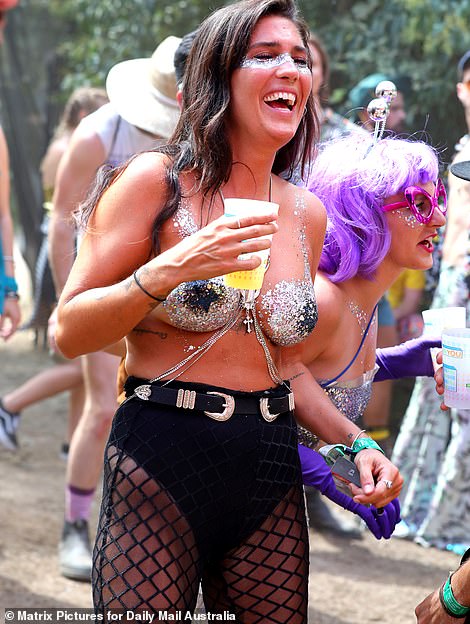 ‘We will continue to work with operators of higher risk festivals to ensure they have appropriate safety arrangements in place, and can comply with the new licensing scheme.’

The government said high risk festivals had serious drug related illness or death occur in the past three years or the Independent Liquor & Gaming Authority determined there may be a significant risk of such illness or death at those festivals.

The list will be regularly reviewed and festivals which improve their safety may be removed from the list while others may be added, the minister said.

It follows an announcement by Mr Toole earlier in the week that music festivals determined to be low risk would obtain a free licence under the coalition’s new licensing regime.

Events found to be high risk will pay $650 for a licence – which is equivalent to the fee they currently pay to operate.

The NSW government has copped criticism over the changes with the Australian Festival Association claiming it’s ‘a fact’ that well-run festivals with excellent safety records are already being negatively affected.

Already, the ongoing feud between the NSW Government and the music industry has already seen two major festivals fall by the wayside. 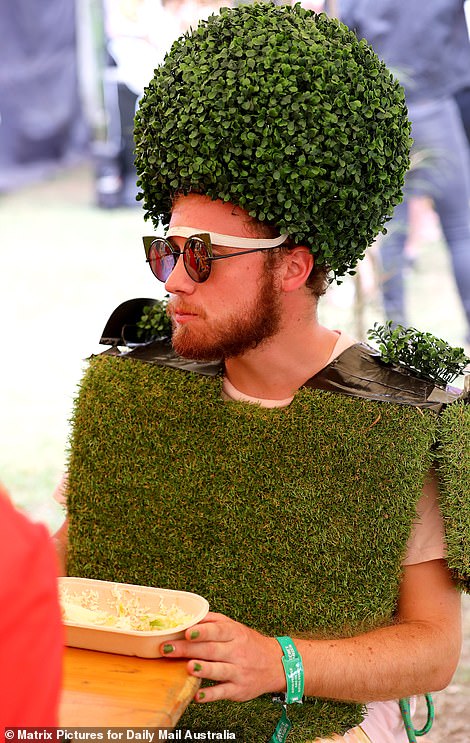 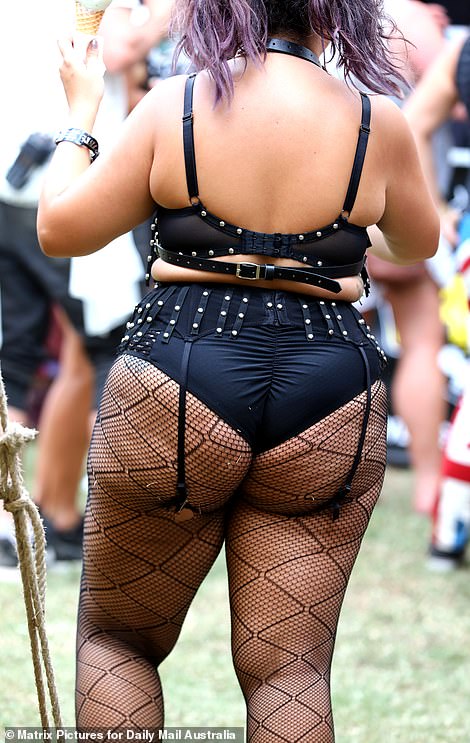 Sun’s out, bums out: one cheeky reveller left little to the imagination as she sported flesh baring stockings 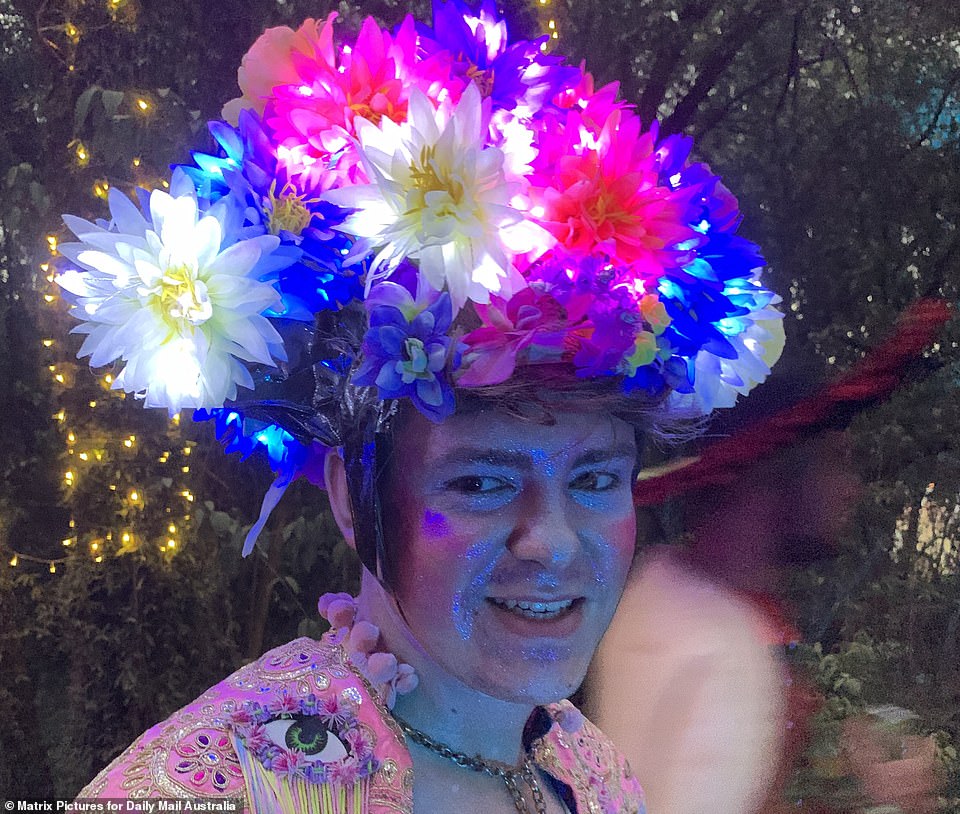 Follow the light! These types of flowers only seem to bloom at night 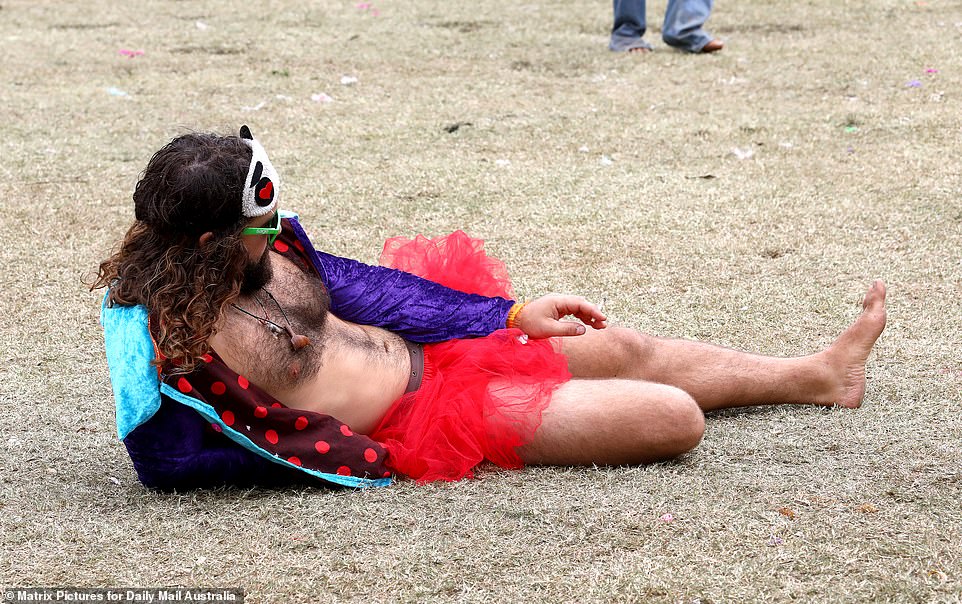 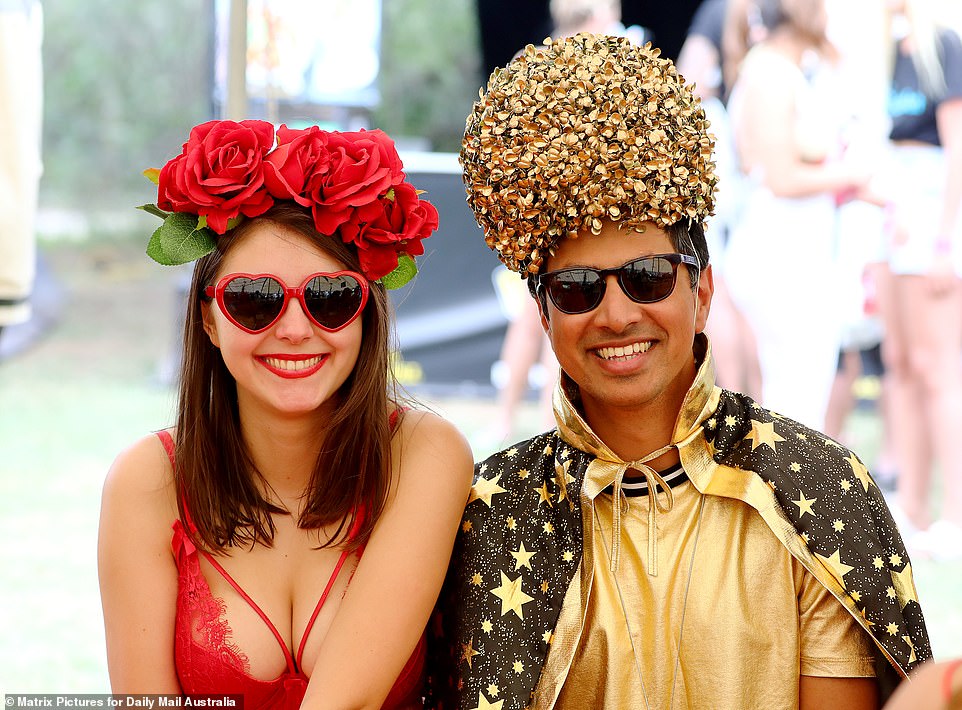 Roses are red, and oh my gosh look at the size of that gold nugget on that guy’s head 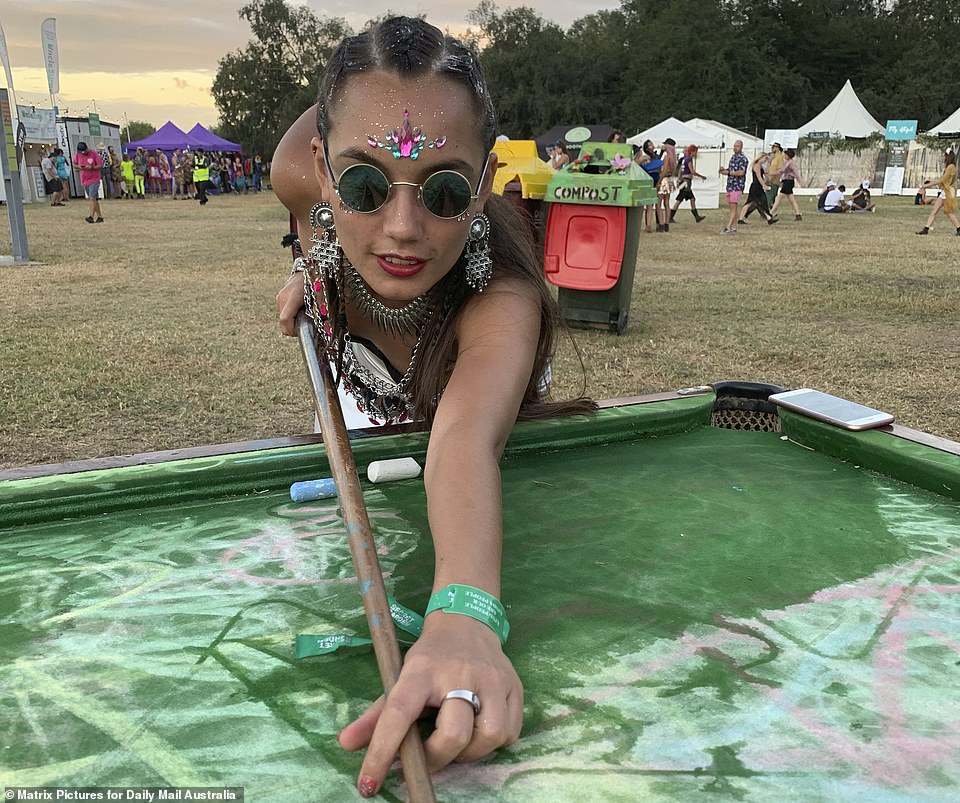 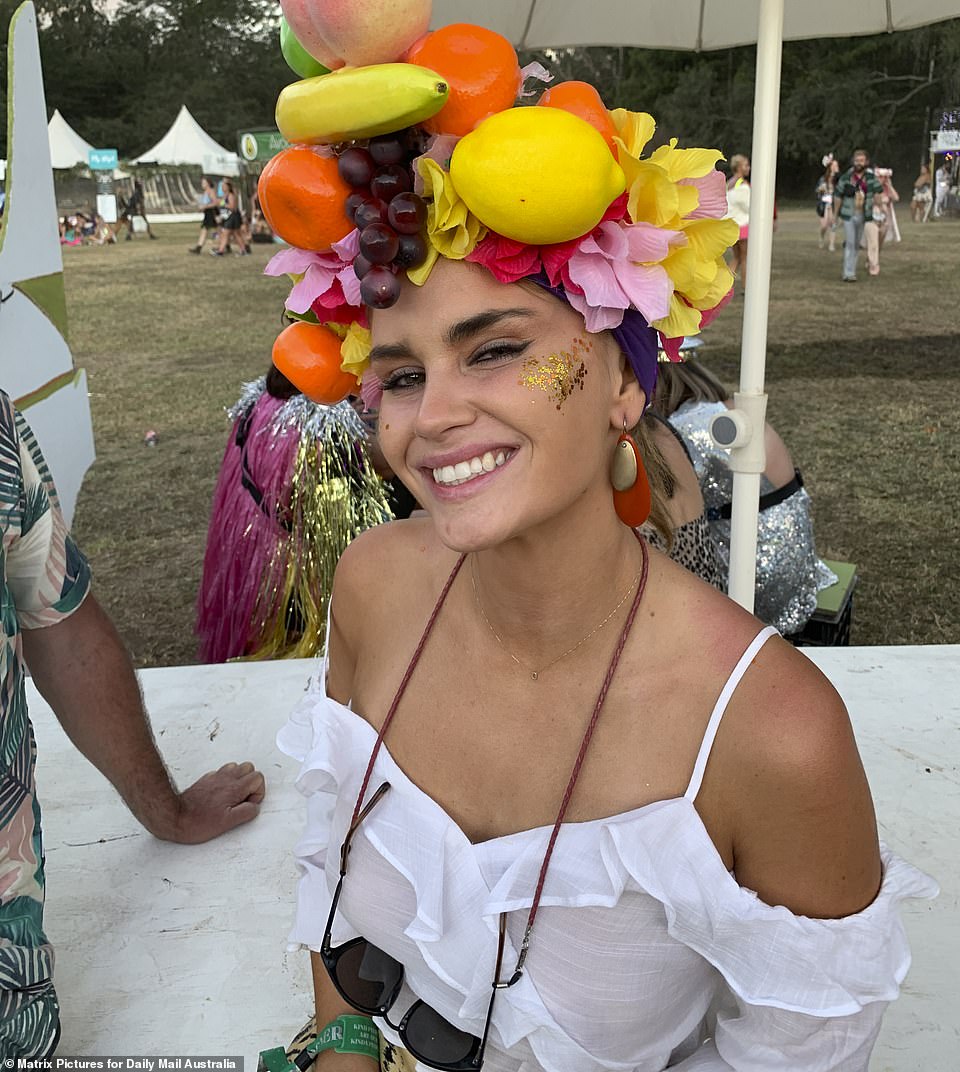 The cardinal rule of every festival: always make sure you pack your lunch so you don’t go hungry – even if that means wearing a crown of tropical fruit 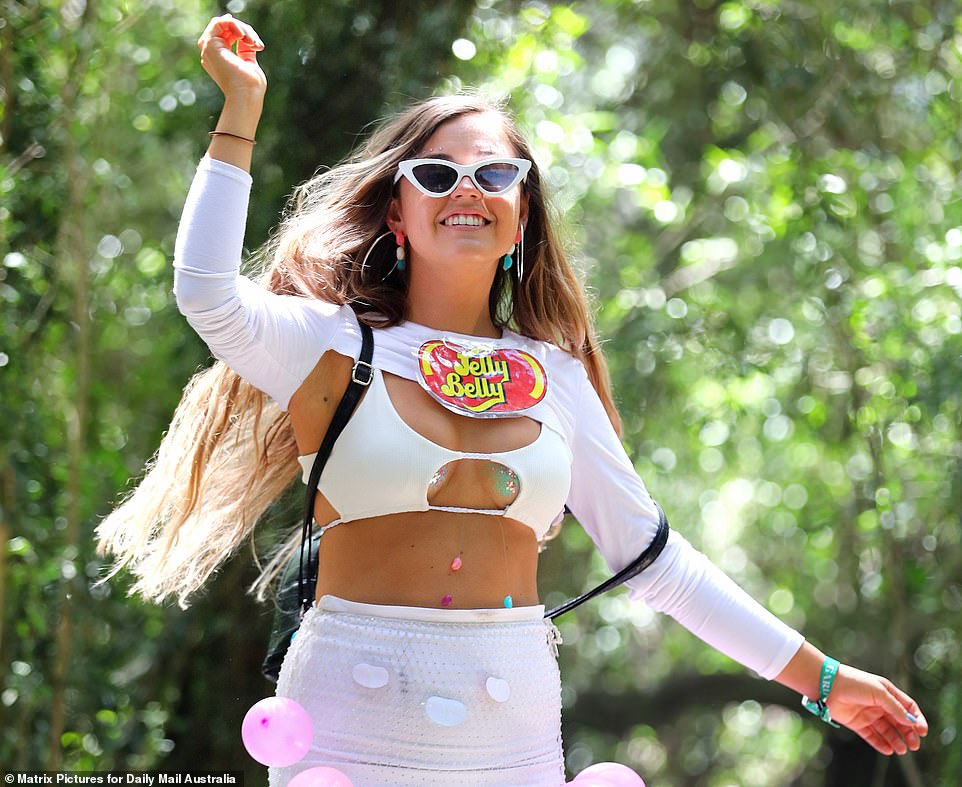 Can anyone guess what sweet is this reveller’s favourite? 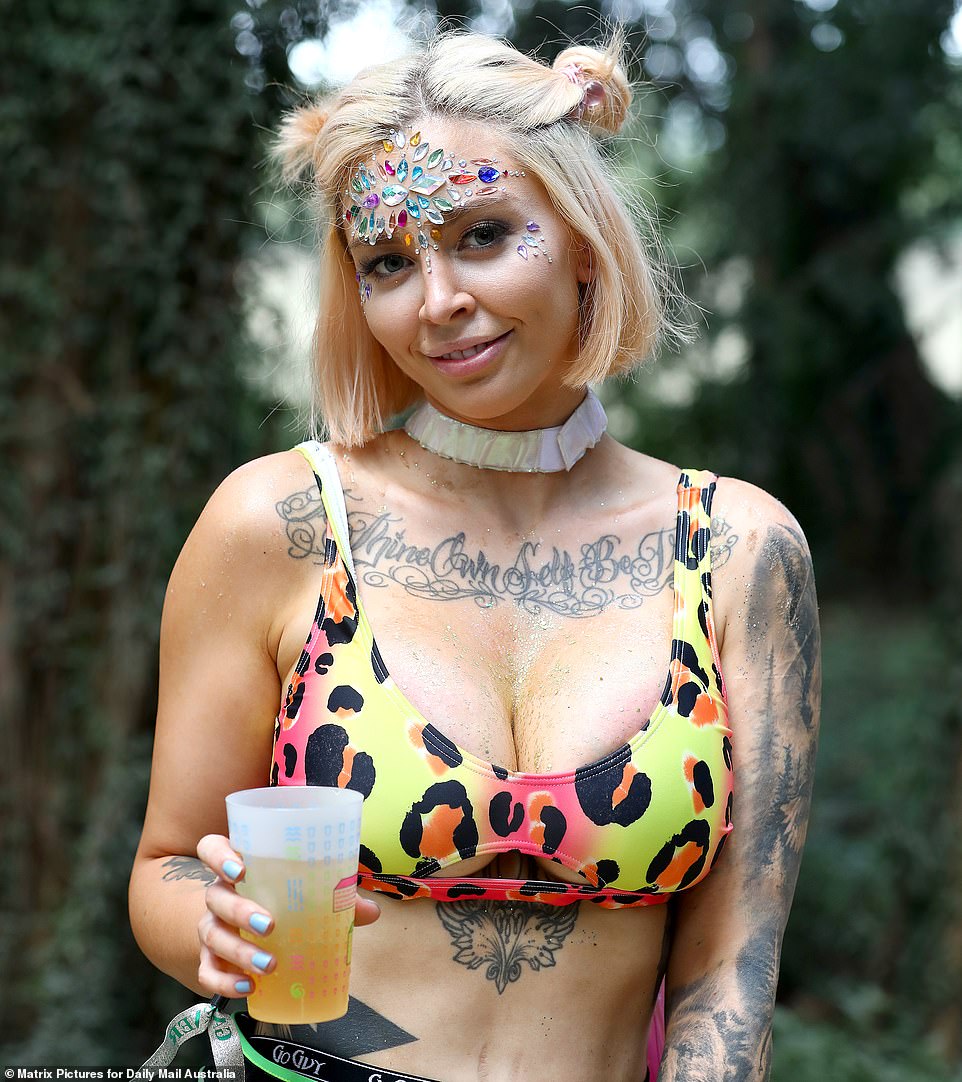 Mountains Sounds organisers announced they had to cancel the event due to excessive costs including huge bills from NSW Police.

The festival was expected to fork out an extra $200,000 for added security and safety measures.

‘We are devastated to announce the cancellation of Mountain Sounds 2019,’ organisers wrote in an emotional statement shared to Facebook.

‘We, like many of you, have seen the festival climate continue to diminish in Australia. NSW in particular is in dire straits.’

‘This is yet another example of the government’s war on festivals.’

The organisers said they previously agreed to downsize the festival to insure they met newly imposed safety, licensing and security costs for the benefit of the patrons.

‘A mere seven days out from the event, further conditions and financial obligations were imposed on the festival, which were impossible to meet,’ the statement said. 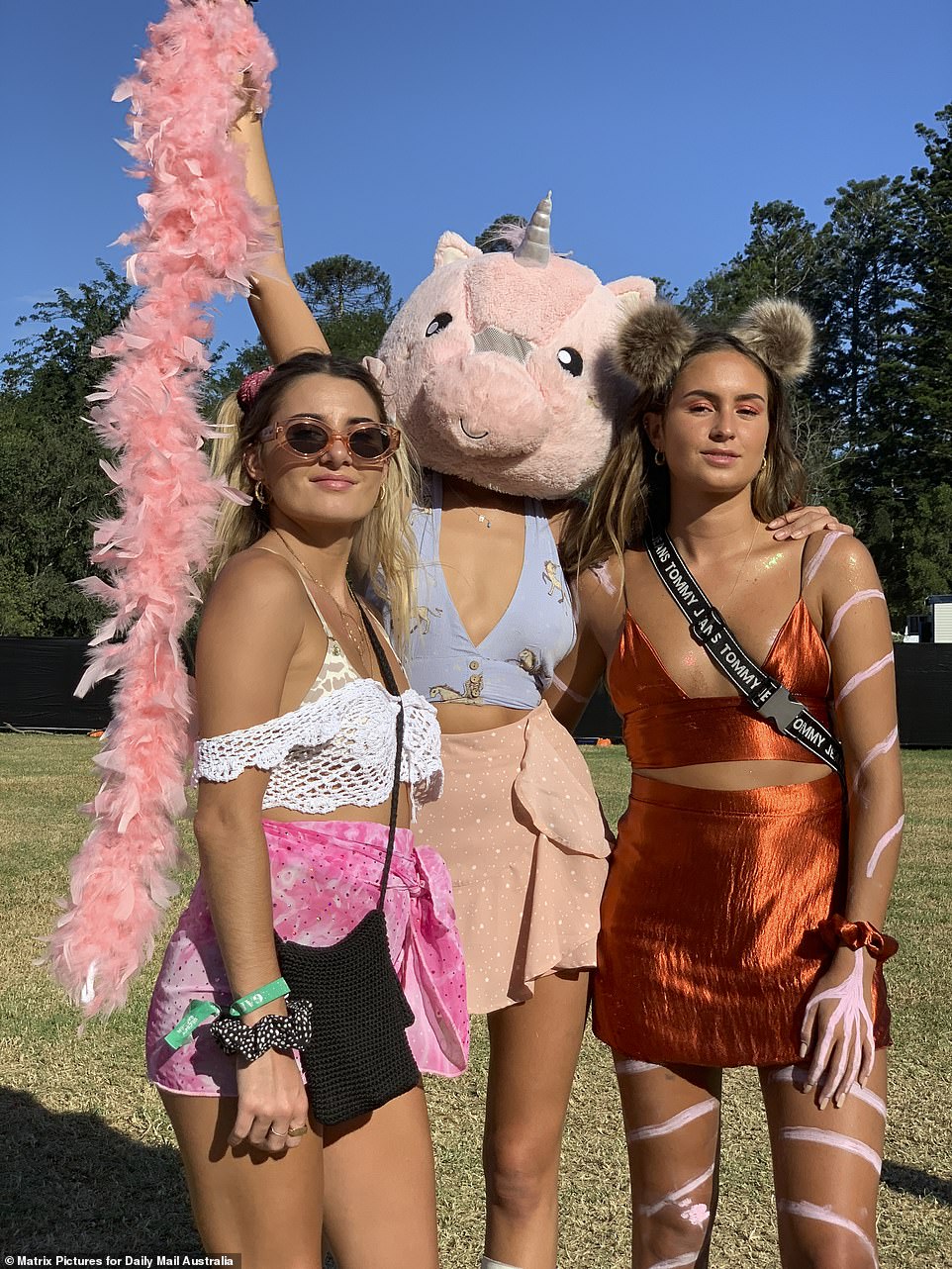 You’ve heard of the half human, half horse before – why not the half unicorn, half human? 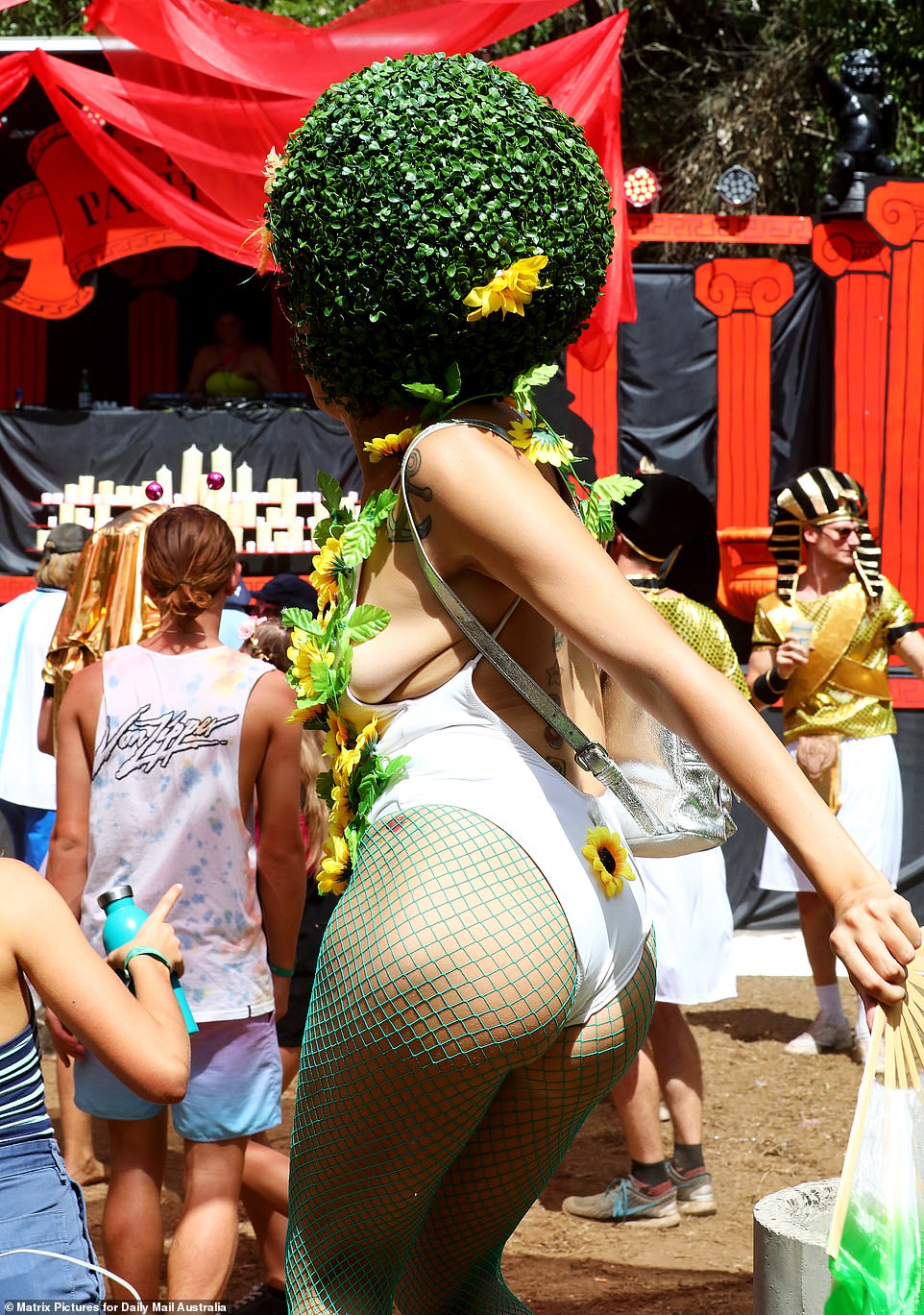 Is it just me or did that tree just move? A reveller shows off her dance moves 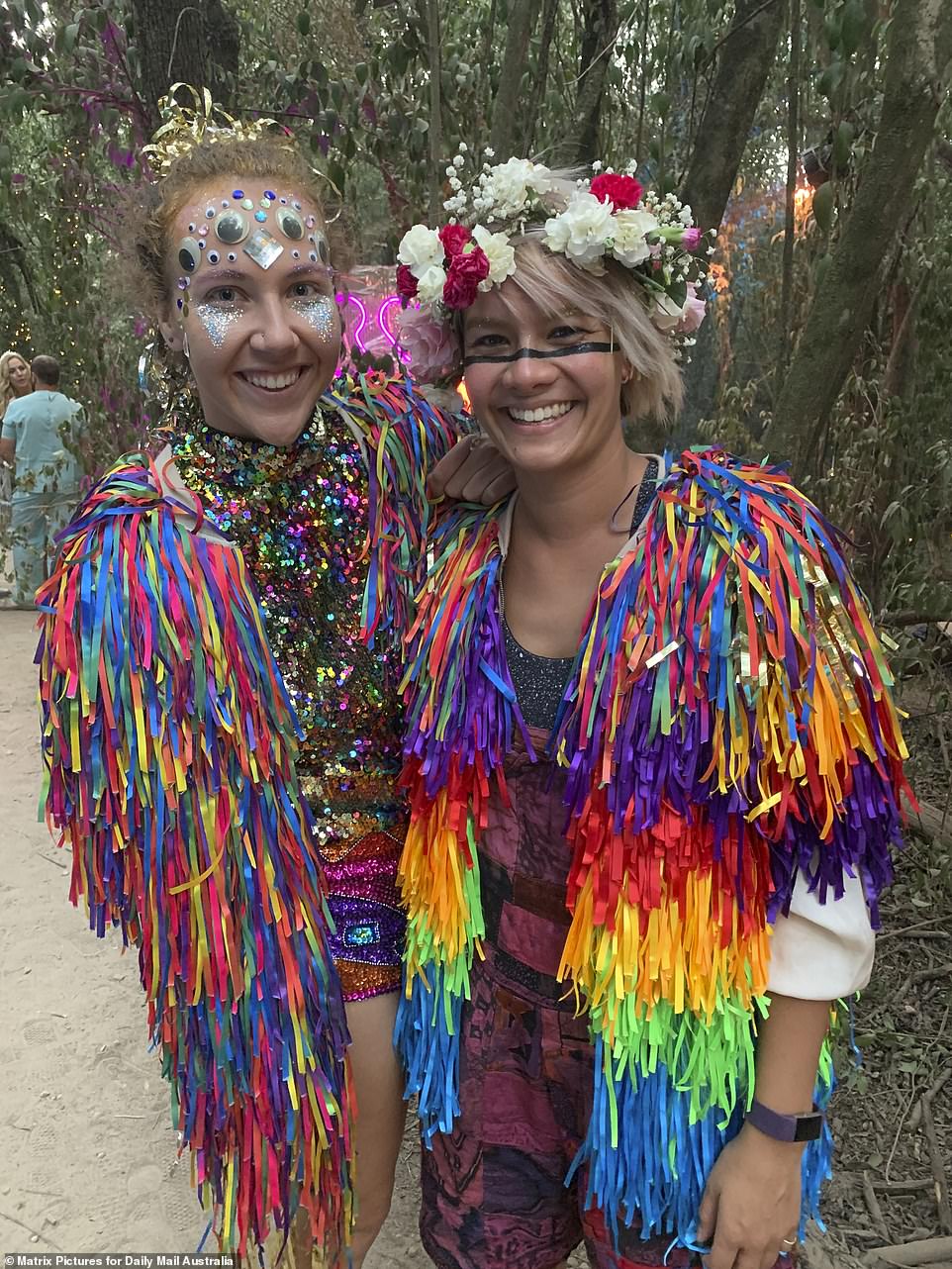 Tassels… lots and lots of tassels: these revellers let loose on their love for bright colours 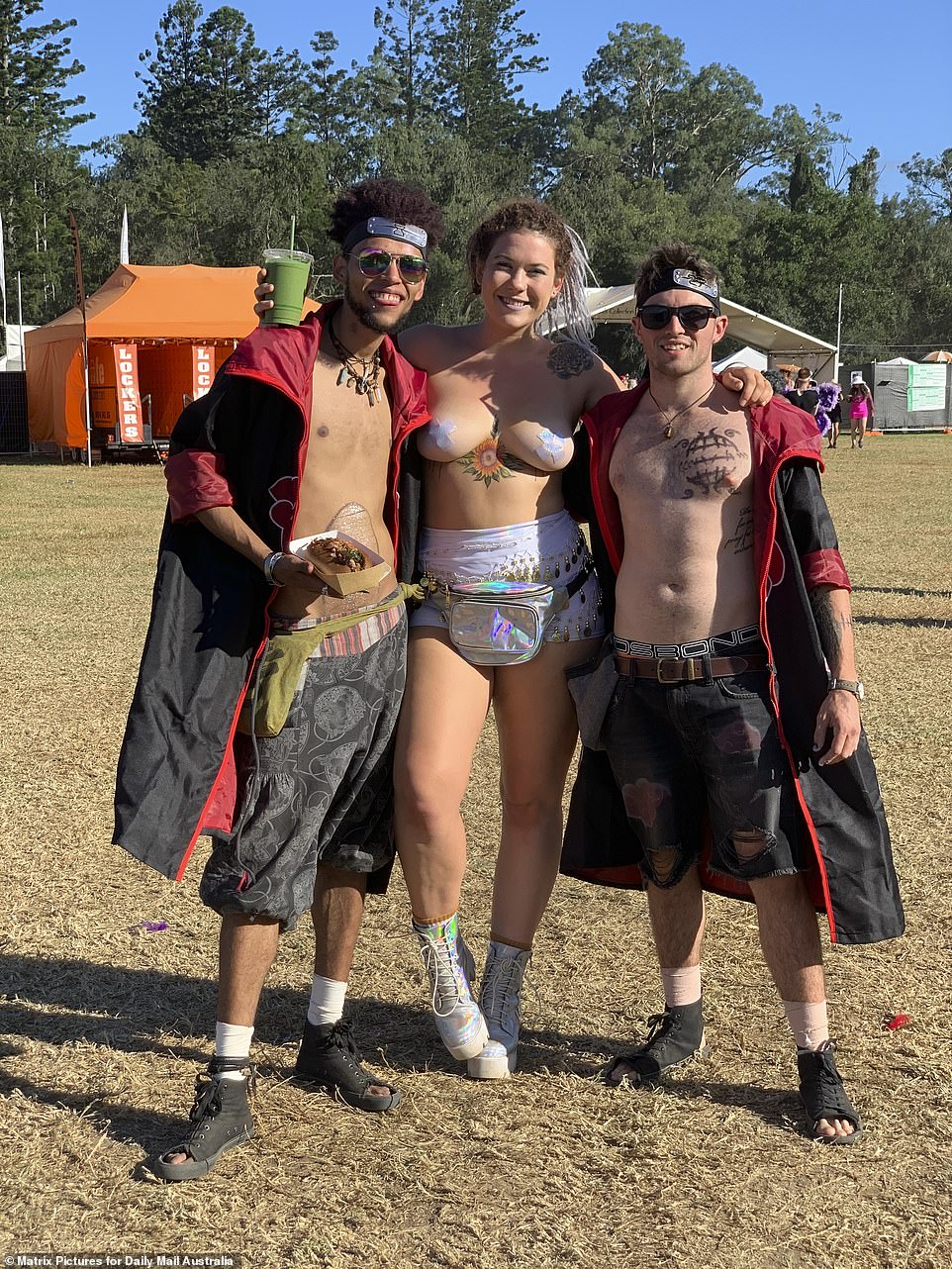 ‘In 2018, Mountain Sounds ran smoothly, with an attendance of 16,000 people over two days, 11 user pay police and no major drug-related incidents.’

One of Australia’s biggest rural arts and music festivals Psyfari also announced it had been forced to cancel this year’s event.

‘We are unfortunate to be in the wrong place at the wrong time when festivals are the new scapegoat of a failed government and their failed war on drugs,’ organisers wrote on Facebook.

‘The fight is usually with those who have never attended such an event and truly don’t understand what it’s all about, yet they’ve shown no mercy in wiping these events in order to make a political point.’

‘While drug-related deaths at festivals are a very serious matter, they really do make up the tip of the iceberg,’ they wrote to their followers

‘To put blame onto festival organisers is an extreme measure.’ 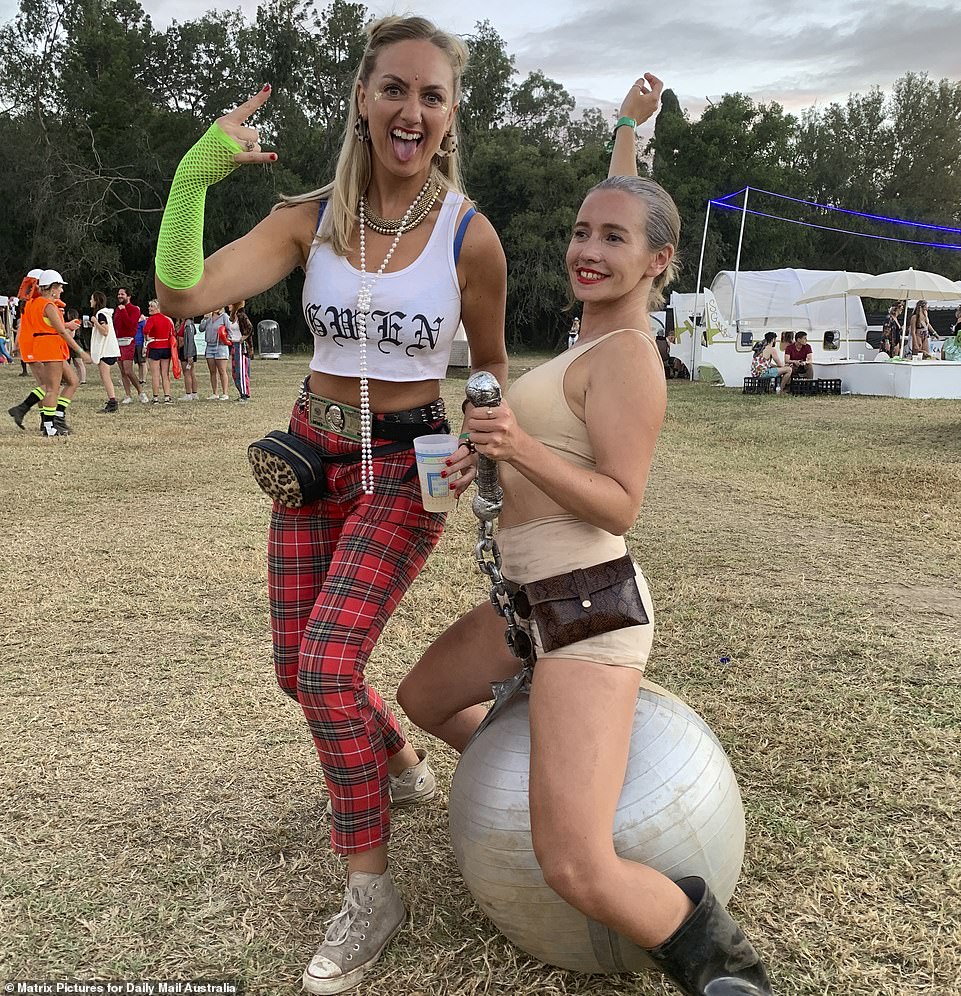 These Miley Cyrus loving revellers came in like a wrecking ball! 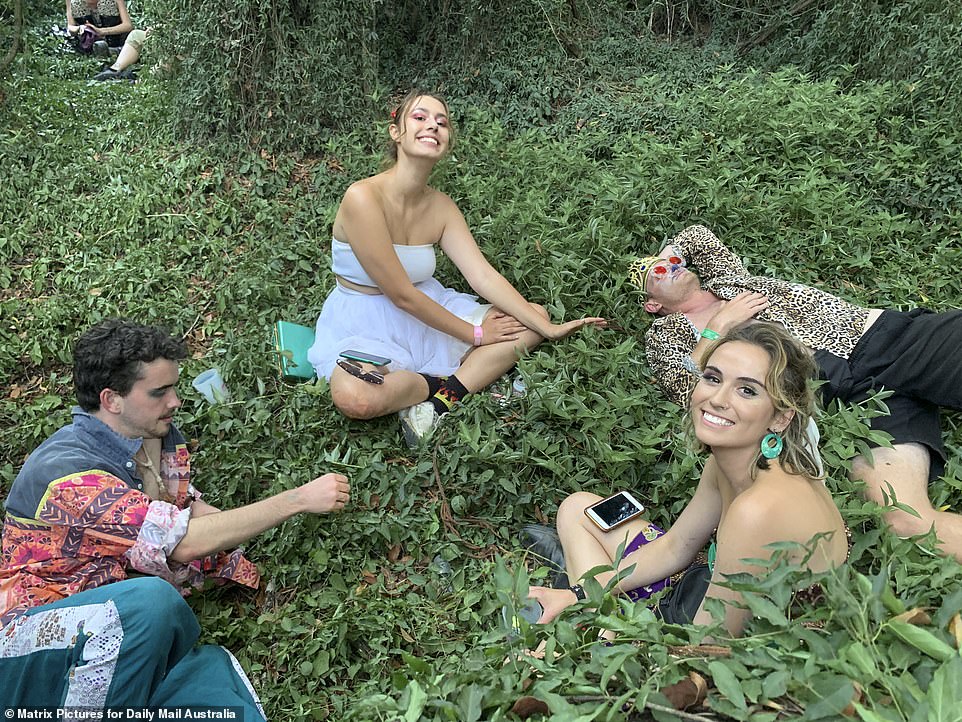 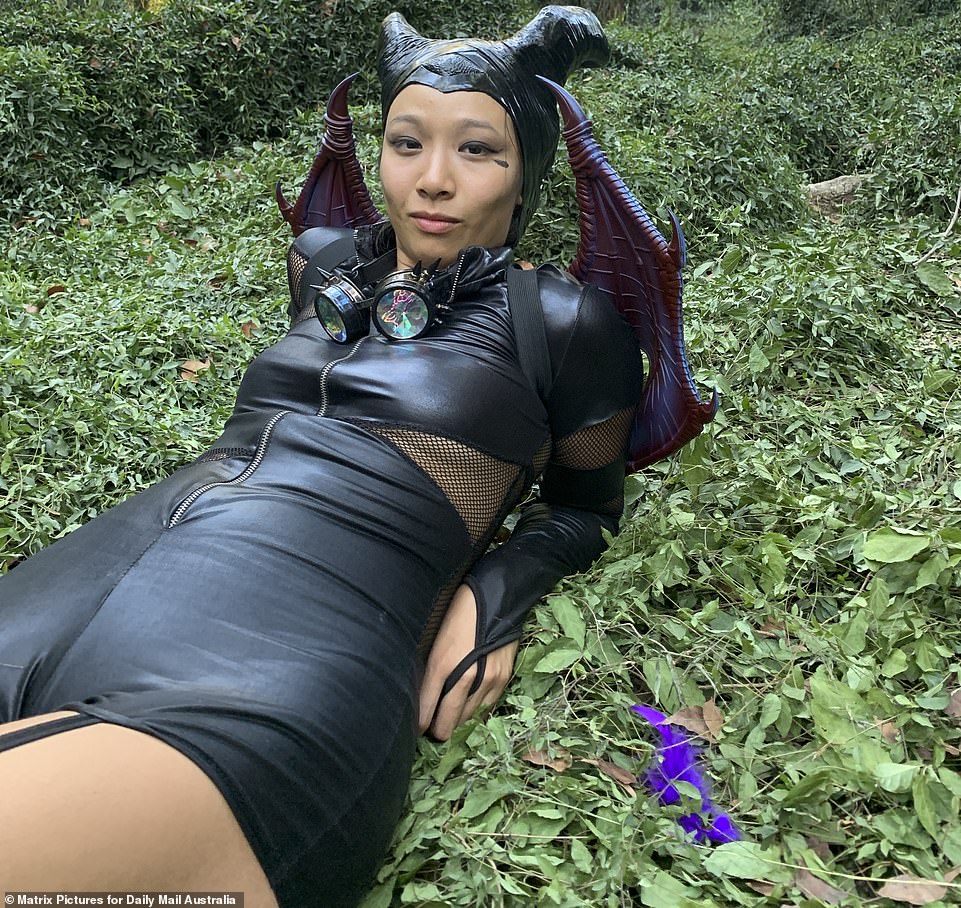 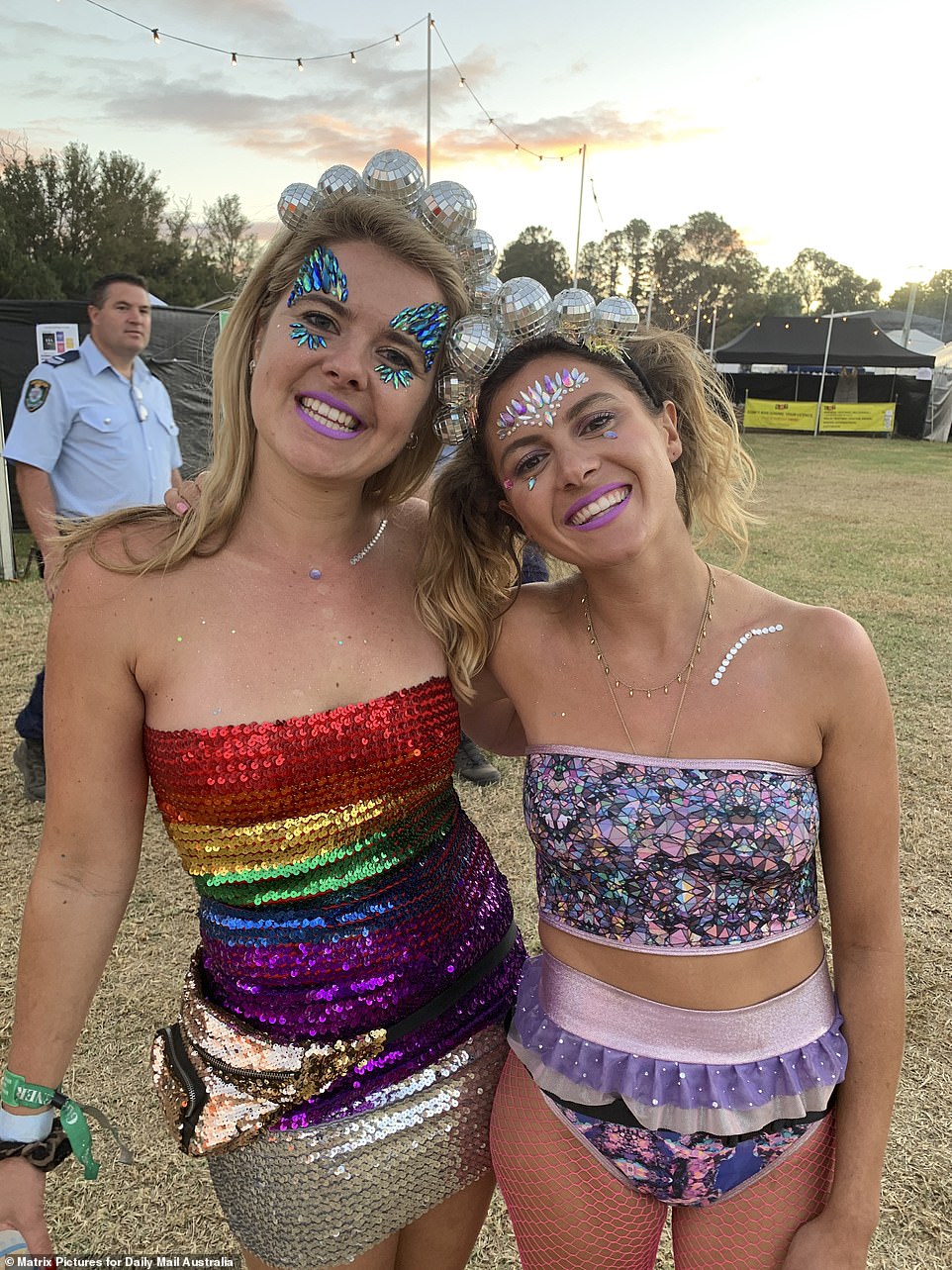 Bow down to disco royalty: this pair of revellers literally crowned themselves disco queens 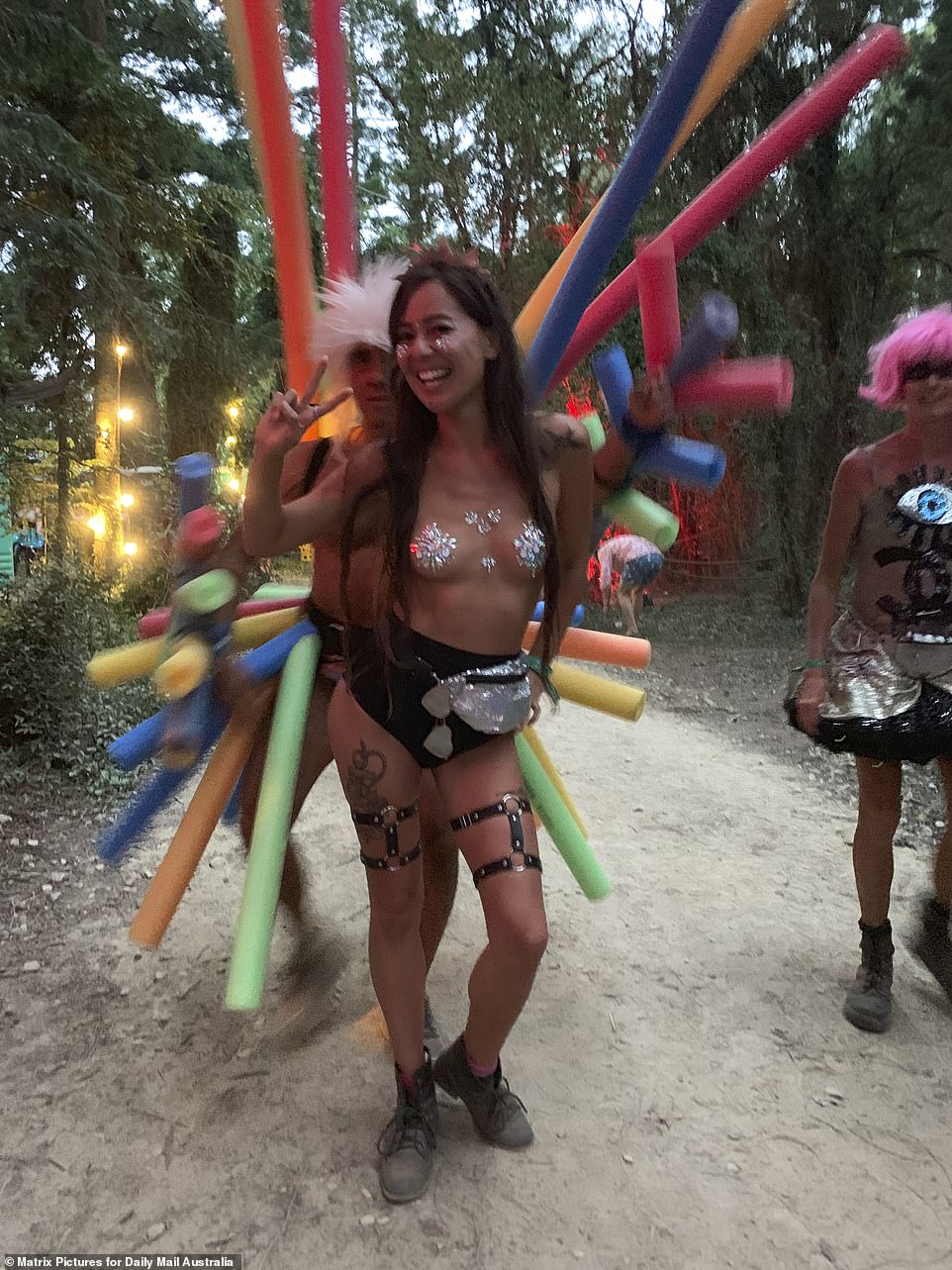 So that’s where all the pool noodles went! One festival-goer steals the spotlight and times this photobomb well 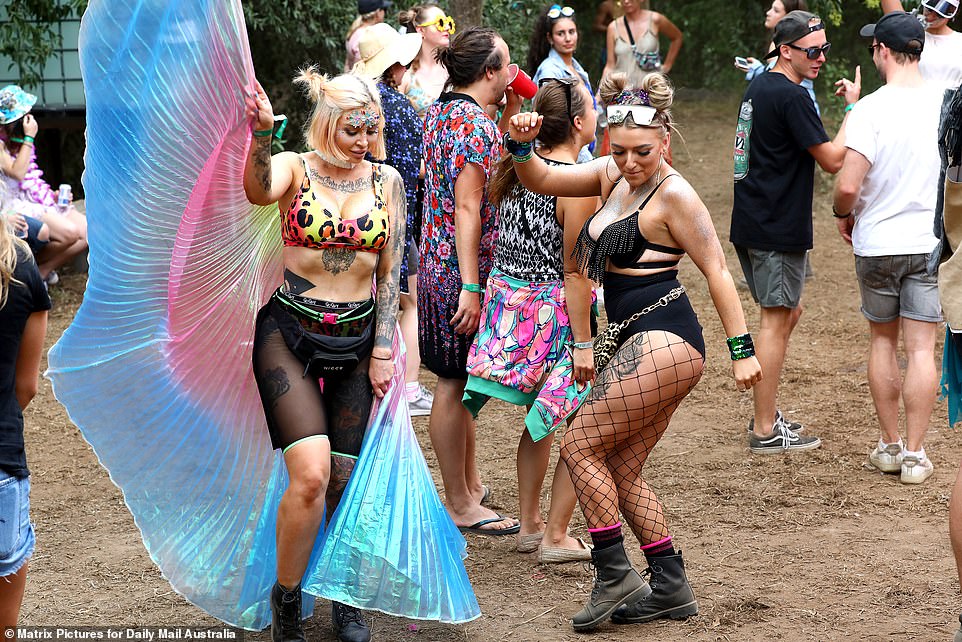 One of Australia’s biggest rural arts and music festivals Psyfari also announced it had been forced to cancel this year’s event. Pictured: Revellers at Secret Garden Festival