‘Reverse vending machines’ will be unveiled to increase recycling

A deposit scheme for plastic bottles will be unveiled in days.

The move is part of plans from Environment Secretary Michael Gove to drive up recycling rates and reduce litter. His officials are looking at ways of introducing a small charge on drinks cans and plastic bottles.

This deposit would be refunded to customers who took their empties to a new network of ‘reverse vending machines’. It is another victory for the Mail’s ten-year campaign against plastic pollution, which secured a major breakthrough with the levy on supermarket bags. 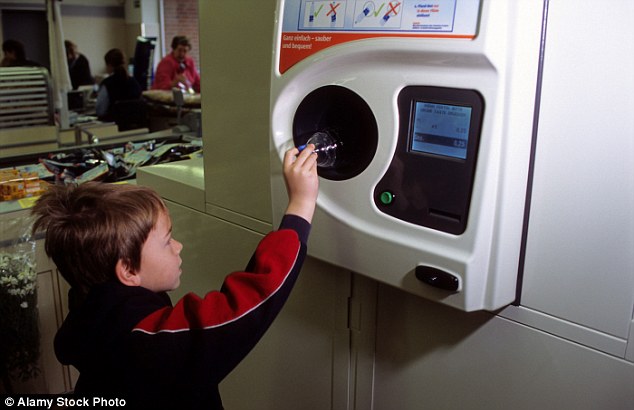 A leaked report shows that adopting the scheme would boost the collection rates for plastic bottles from around 60 per cent to more than 85 per cent.

The move could also reduce the litter resulting from bottles and cans by at least 70 per cent, the report said.

Mr Gove is expected to reveal the detailed plans next week. He said last year that bottle return schemes were a ‘great idea’ and he wanted to examine how one would work.

Therese Coffey, a junior environment minister, has visited Norway to see whether its system could be adopted in the UK.

Mr Gove pledged to work urgently to combat plastic pollution after seeing shocking scenes of its effects on the environment in the BBC’s Blue Planet II.

The bottle deposit would need to be at least 15p to encourage customers to reclaim it, according to industry experts.

An estimated 35million plastic bottles and 20million aluminium cans are sold in the UK every day. Fewer than 60 per cent of bottles are recycled, fuelling a tide of litter and waste. 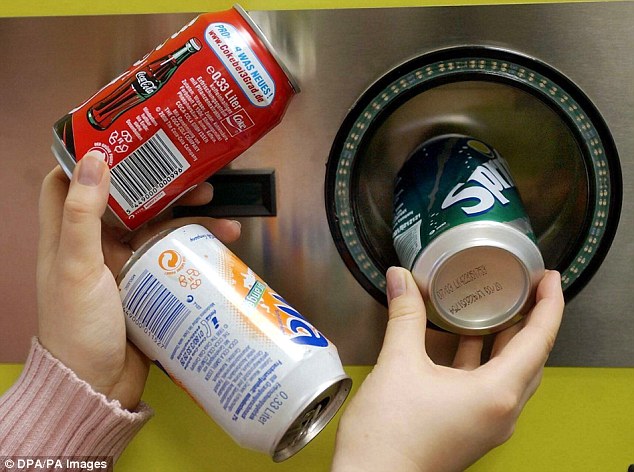 Th machines are already available in some supermarkets in Duesseldorf, Germany 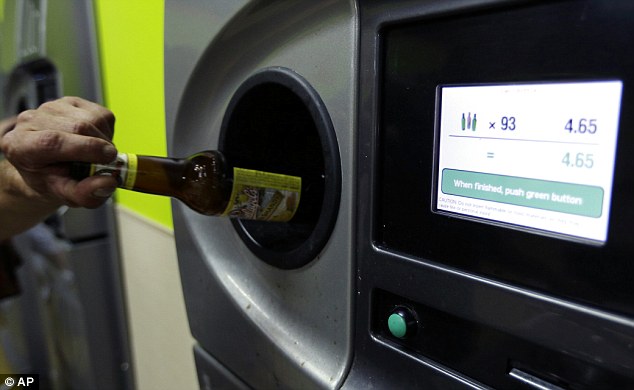 In countries with deposit schemes, recycling rates are higher than 90 per cent

In countries with deposit schemes, recycling rates are higher than 90 per cent.

Campaigners insist a deposit scheme must cover all plastic drinks bottles, as well as aluminium cans and glass drinks bottles – if it is to be effective and financially viable.

Coca-Cola, Tesco, Iceland and the Co-op have all backed the idea.

The Mail has seen a study on bottle deposit schemes produced by the clean oceans campaigning group, the Ellen MacArthur Foundation. It concludes: ‘A deposit scheme for plastic bottles and other applications increases volume and quality of collected packaging.

‘In addition, implementing a deposit scheme reduces littering and results in neutral or positive economic gain when taking into account all costs.

‘A deposit scheme is the only proven, widely replicable mechanism to drive collection rates to 85 per cent and above.

‘In the US, at least eight states have statistics showing that due to a deposit scheme, beverage-related litter has been reduced by around 70 to 84 per cent.’

Diesel owners will not be offered a national scrappage scheme for polluting cars.

The idea had been floated as a way of cutting illegal levels of air pollution. But yesterday the Government published details of its air quality plan without such a measure.

‘We are not proposing to take forward a national scrappage scheme at this time,’ said the Department for the Environment documents.

Councils will be able to submit bids for a share of £220million, which they could use for park-and-ride schemes, concessionary travel and bus improvements.

However, the Government said local authorities might consider financial incentives for drivers to scrap diesel cars.

Greenpeace accused ministers of a ‘tyre-burning U-turn’ and ‘passing the buck’.

Spokesman Morten Thaysen said the move would have taken polluting cars off the road while helping drivers who ‘bought dirty diesels on a false prospectus’.

ClientEarth’s Simon Alcock said: ‘This is a pitiful response from the Government, which is yet again shirking its responsibility to clean up our country’s air pollution.’

And the report – which combines a range of expert research – points to big savings for financially struggling local councils, which carry huge costs in dealing with household waste and litter.

It says: ‘In Canada and the United States, over 20 studies have showed that deposit schemes have only net positive effects on municipal budgets, due to reduced or avoided costs of collection, treatment, disposal, and litter abatement.

‘The implementation of a deposit scheme in the UK has been predicted to create 3,000 to 4,300 full-time employment jobs, including an overall increase in the number of higher skilled jobs.’

Last night local councillors from all parties wrote to Mr Gove backing a full bottle and can deposit scheme.

The letter was written by Peter Wood, a Tory councillor in Sunderland, and endorsed by others from Labour, the Liberal Democrats and Greens around the country.

It said: ‘Like you, we do not regard tackling litter in our towns, cities, countryside and seas as a partisan issue.

‘The communities we represent, whether rural or urban, want to see this problem dealt with as a matter of urgency.

‘For drinks containers, whether cans or glass or plastic bottles, a solution is already in widespread use in other countries: deposit return. As long ago as July last year, you described deposit return as a great idea, and we agree.

‘We would therefore urge you to commit to such a system for England, one that will work well with the system currently being designed for Scotland.’

Samantha Harding, of the Campaign to Protect Rural England, welcomed the political unity, saying: ‘It underlines the huge amount of support Michael Gove already has for a deposit return system.’

Dr Dominic Hogg, a recycling expert at the consultancy Eunomia, said some industry players had been trying to kill or water down plans for a deposit scheme.

‘There has been talk of limiting it to small ‘on the go’ plastic bottles. That just will not work to address the massive problems we face,’ he said. It will only be effective if it covers all drinks bottles and cans – plastic, aluminium and glass.’ 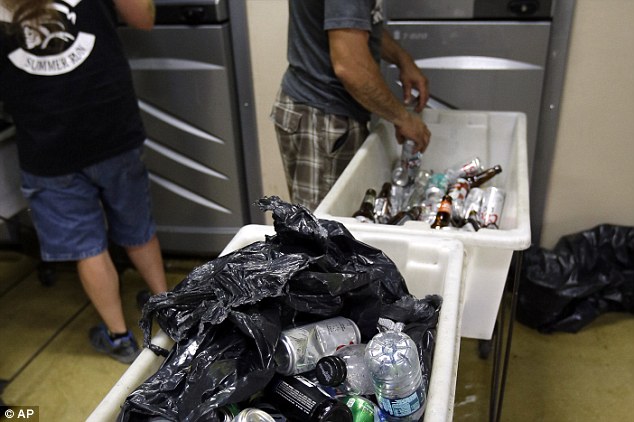 Gavin Partington, of the British Soft Drinks Association, said: ‘We are open-minded about a deposit return scheme. We’d be very supportive.’

A spokesman for the Department for Environment, Food and Rural Affairs declined to comment last night.

Tanya Steele of WWF, the global wildlife charity, said: ‘Plastic bottles are littering our communities and oceans, choking wildlife and polluting our precious world. I applaud the Daily Mail campaign, which has made tackling plastics a front-page issue and one that can no longer be ignored.

‘We need action now to end our reliance on single-use plastic and improve how we recycle and reuse plastic products.’

Step by step: How a modern deposit return scheme might work

British shoppers could be tossing away a third more disposable cups every year by 2030 unless action is taken to turn the tide on plastic waste, a report warns.

Demonstrating the need for a bottle deposit scheme – along with further measures – it forecast that the amount of plastic waste we produce overall is set to rise by a fifth by the end of the next decade without reforms to encourage recycling.

Its report said that this year alone the UK will bin 4.1billion single-use drinks cups and lids, and this is set to rise by a third to 5.4billion in 12 years. It also reveals that UK consumers are among the biggest users in Europe of straws, food containers, crisp packets and wet wipes. We use 10.8billion wet wipes, 16.5billion pieces of plastic cutlery and 42billion straws every year.

The report said our love affair with fast food is filling our bins with plastic as packaging makes up 67 per cent of the plastic ending up in our bins or litter. And we throw away more plastic cotton buds – a staggering 13.2billion – and more sanitary towels – 4.1billion – every year than any other country in Europe.

We also bin 44.1billion plastic coffee stirrers each year and 8.3billion crisp packets. Tanya Steele, UK chief executive of WWF, said: ‘The amount of plastic which the UK is throwing away is set to rocket by over a million tonnes by 2030. We need action now to end our reliance on single use plastic and improve how we recycle and reuse plastic products.

‘The Government must not bottle it when it comes to introducing a deposit return scheme.’ The conservation group also wants a ‘latte levy’ on single-use drinks cups and a ban on avoidable single use plastic by 2025.

The predictions for rising plastic use in the UK are based on modelling existing data and take into account factors such as rising economic output and the impact of new European legislation.

The report produced by consultants Eunomia also warned that while plastic waste would rise dramatically without action, recycling rates for plastic would increase more slowly.

Less than a third (31 per cent) of plastic waste is recycled, a figure which is expected to rise to 42 per cent by 2030.

The research was released to coincide with Earth Hour, a global environmental event. In the UK it takes place at 8.30pm today when landmarks including Tower Bridge, Brighton Pier, and Cardiff Castle, along with millions of people, are expected to turn off the lights.