Waking up to the sound of the sea gently lapping the shoreline, retreating and advancing with reassuring regularity, is perhaps one of the most pleasurable ways to wake from a deep slumber.

There’s something so utterly relaxing about spending the first few moments of the day lying in bed and listening to the waves touching the sand.

Such is the morning waking-up ritual at Beach Club, a boutique hotel situated right on Catseye Beach on Hamilton Island – the largest inhabited island in Queensland’s Whitsundays archipelago in the heart of the Great Barrier Reef – where my partner and I enjoyed a long weekend babymoon. 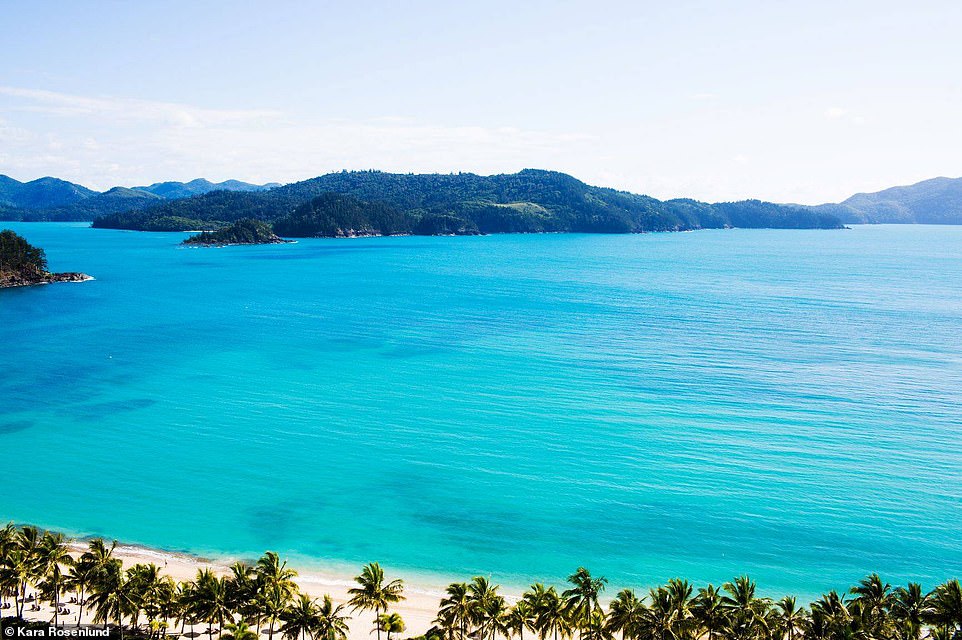 The upscale resort affords guests views out across Hamilton Island Reef (pictured). Opposite is Whitsunday Island 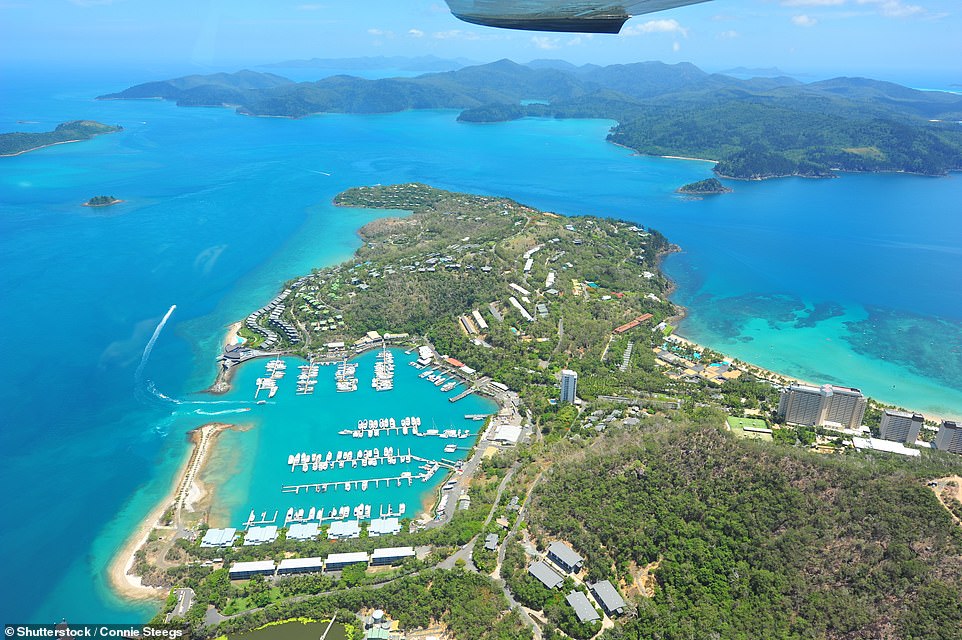 Hamilton Island (pictured) is the largest inhabited island in Queensland’s Whitsundays archipelago, which contains 74 islands in total. It’s right in the heart of the Great Barrier Reef. The Beach Club, where Sarah stayed, is on the right-hand side of this amazing aerial image

Leaving the shutters onto the balcony of the sea-facing room open, we were greeted with the most spectacular sunrise as the day broke over Whitsunday Island reef in the distance and the first light filled the room.

The tide fluctuates so much that the view from your room of the Coral Sea dramatically changes throughout the day.

And the locals pay you a visit.

Cockatoos are often found sitting on the walls of the property, while come dusk wallabies can be found feeding on the grass gardens directly in front of the beach.

There are also turtles floating in the waters should you venture out just a little distance from the sands.

All 57 rooms of the adults-only Beach Club resort offer breathtaking views across the water with impressive vantages of the surrounding reefs, but it isn’t just your senses of sight and sound that are captivated here.

The rooms are mere steps from the sand and the morning high tide leaves a distinct salty scent in the air.

Your sense of smell becomes heightened when pregnant and breathing in this sea air each morning proved to be a heady cocktail and a moment of calm that I tried to commit to memory to conjure up for use during future sleep-deprived nights.

There’s an Instagrammable infinity pool to lounge by, hammocks to snooze in and the huge beds in each suite to dive into. Each space is perfectly designed for much needed R&R, which is probably why the spot is so popular with honeymooners and babymooners alike. 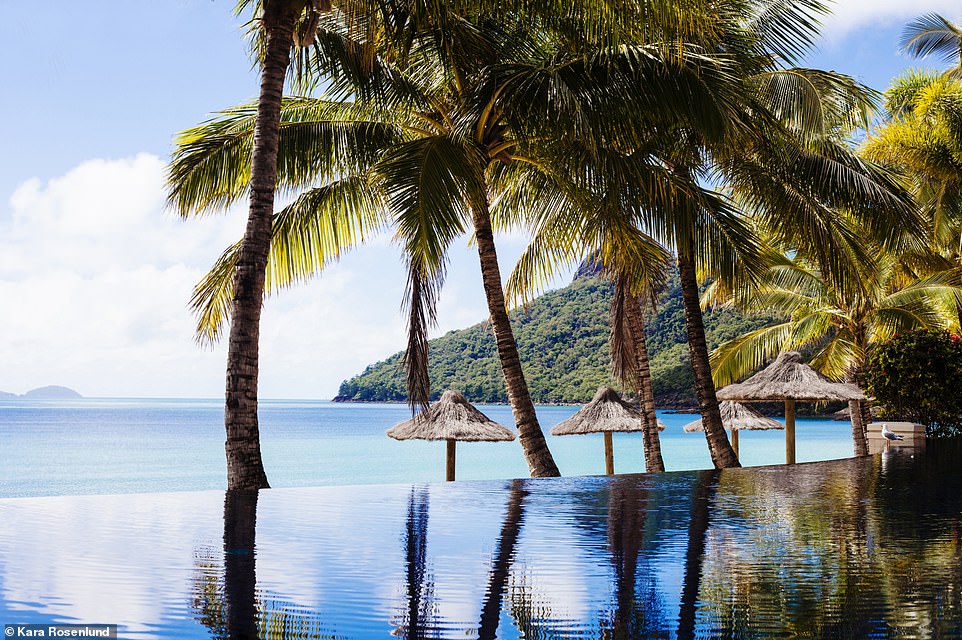 A view of the hotel’s infinity pool, which is lined by palm trees and looks out over Catseye Bay 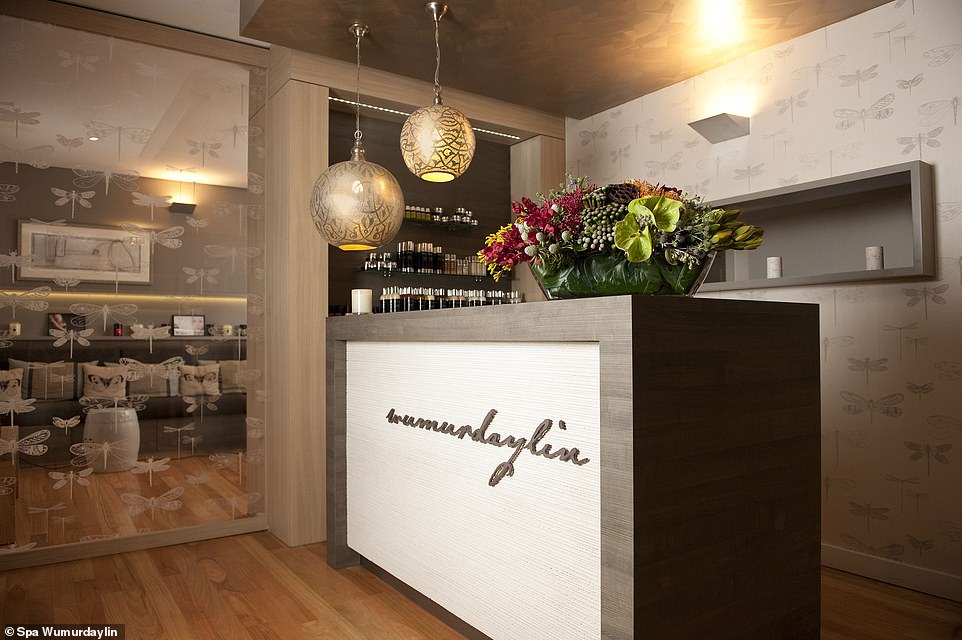 For a spot of relaxation, Sarah checked into Spa Wumurdaylin for an hour-long pregnancy massage, which she said helped to ease her hips and relax her shoulders

WHERE IS HAMILTON ISLAND?

Hamilton Island is located just off the Queensland coast of Australia and in the heart of the Great Barrier Reef. Of the 74 Whitsunday Islands, it is the largest inhabited island, measuring 4.5km from north to south and 3km from east to west, and positioned approximately 887km (551 miles) north of Brisbane and 512km (318 miles) south of Cairns (by air).

The only island in the Great Barrier Reef with its own commercial airport, access to Hamilton Island is easy with short, direct flights from Sydney, Melbourne, Brisbane and Cairns and good connections from other Australian cities.

Beach Club is centrally located on Hamilton Island so you get the best of both worlds – a child-free infinity pool to relax by and a private beach to enjoy in the aforementioned hammocks.

During our stay we interrupted our hectic schedule of relaxing on the beach for some pampering with a one-hour couple’s massage at the spa – Spa Wumurdaylin.

I was thrilled to be greeted with a pregnancy pillow with a section cut out for my bump allowing me to enjoy a massage lying on my front.

It sounds like a minor detail but after six months of being unable to, an hour lying on my front felt like total bliss.

While we each had our own masseuse who focused on our different requests during the massage the experience was enjoyed jointly through guided meditation at the beginning and end of the treatment.

A lot of spas offer pregnancy massages as an afterthought and aren’t great at addressing those little niggles that are unique to growing a baby. That wasn’t the case here.

My tight hips were eased, my lower back stroked and kneaded with just the right amount of pressure and tension banished from my shoulders. An hour of pure bliss and a delight for my sense of touch.

So what about stimulating your taste buds? There are plenty of dining options. 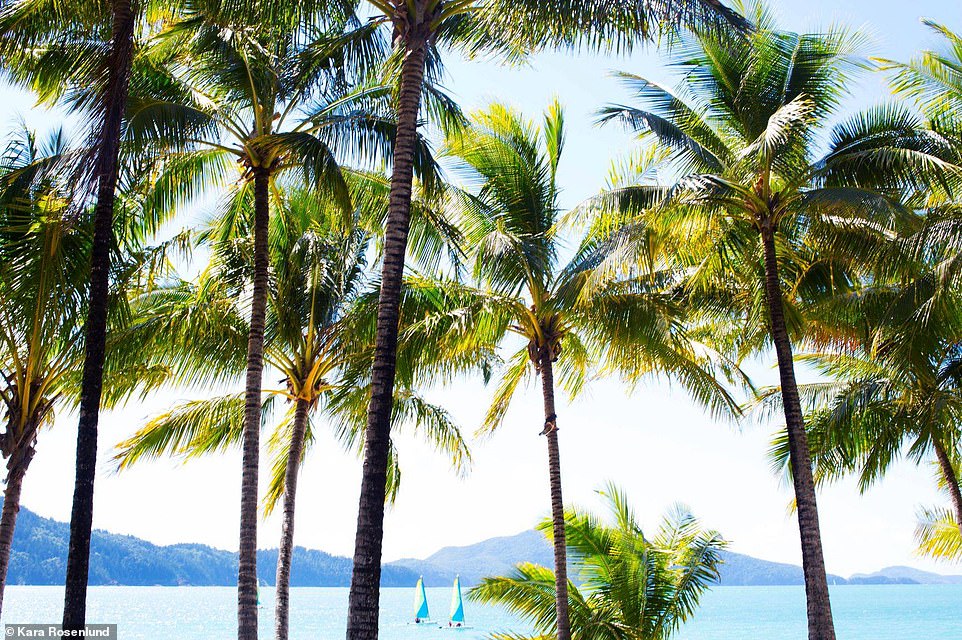 A view from the palm-fringed adults-only resort, which sits on the shores of Catseye Beach

There are a variety of eateries around the marina from a pizzeria to the high-end Long Pavillion at much-hyped luxury resort Qualia.

And you can enjoy cocktails and tapas while watching the sun go down at the bar at One Trill Hill – the highest point on the island – but it’s a popular site so be prepared to go early to bag a spot.

We loved the contemporary Australian cuisine at the restaurant within Beach Club itself, which overlooks the pool and the sea beyond.

The menu changes daily with locally sourced fish and meat options but while the dishes are sophisticated they steer away from the big plate/tiny portion ethos so often found in upmarket eateries. 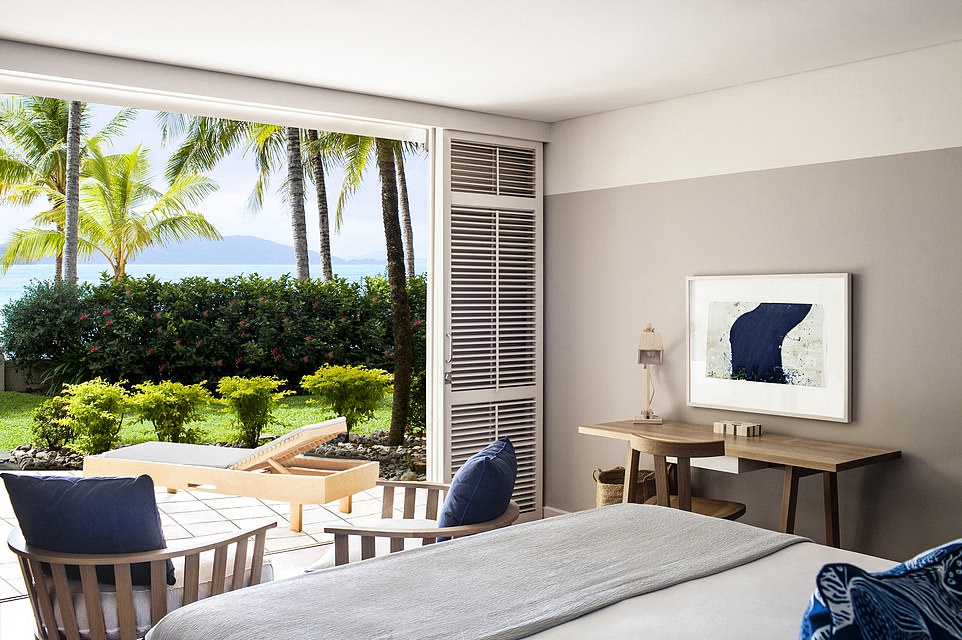 We feasted on succulent scallops and Queensland tiger prawns to start, followed by pan-seared New Zealand salmon on a bed of sweet corn puree served with asparagus and a centre cut grain-fed fillet on a bed of potato gratin, Dutch carrots and sautéed greens.

The generous portions also extend to the breakfast offering, included in the room rate.

I let the baby decide on brekkie and it turned out she wanted a huge plate of pancakes drizzled in maple syrup and berry compote, whipped cream, a pain au chocolat and a daily juice. Who am I to argue?

Of course there are plenty of other ways to indulge at Beach Club. 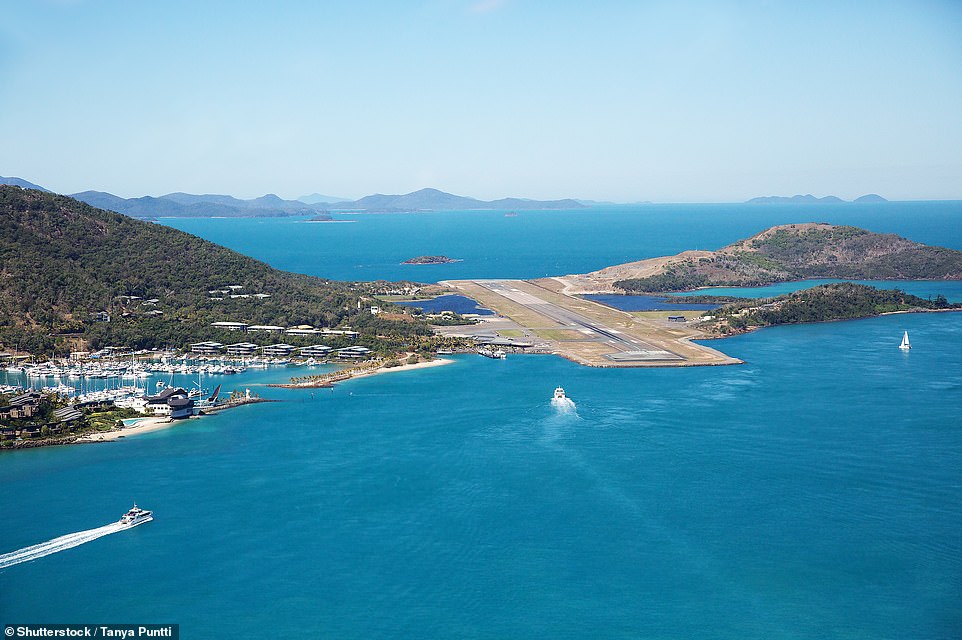 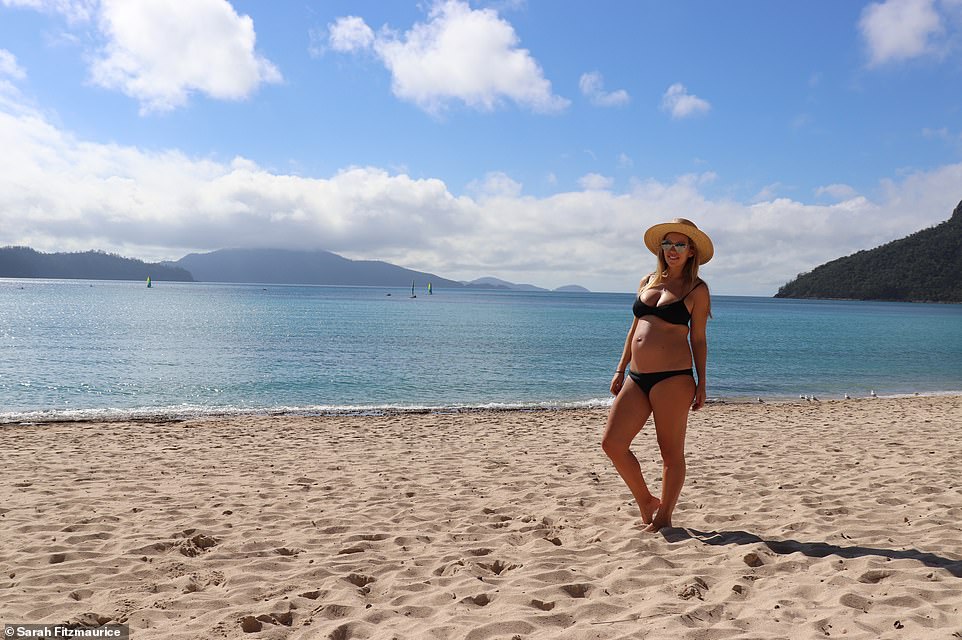 The expectant mum strikes a pose on the serene shoreline. She praised the service at the Beach Club, where snacks and mocktails were delivered to her beach lounger by attentive staff 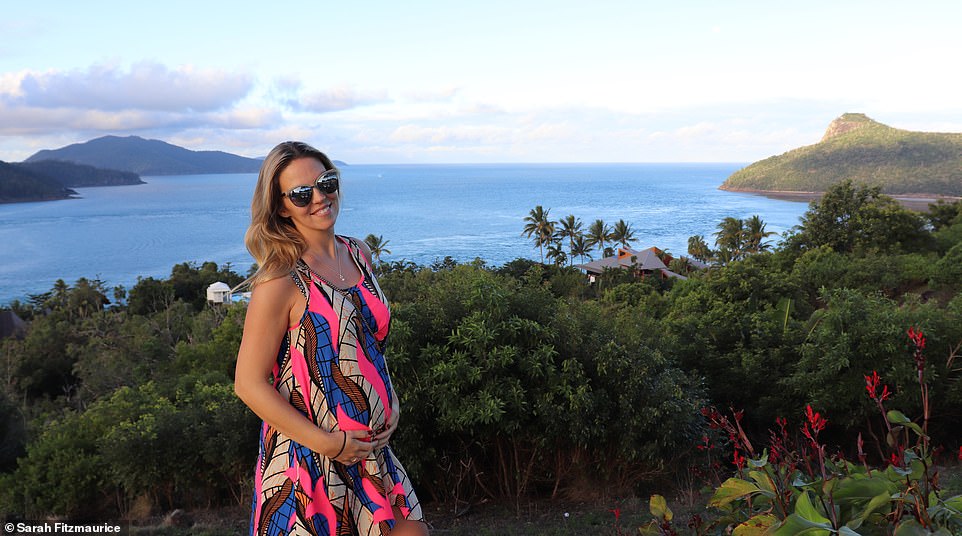 Palm-fringed perfection: Sarah cradles her bump as she soaks up the magnificent tropical views

Want a snack and a mocktail brought to your lounger on the beach? No problem. Fancy a decadent dessert in your room? It’s on its way.

Also, I was impressed that every server, waiter and staff member remembered my pregnancy (in case the large bump wasn’t a giveaway) and advised which foods and drinks were most suitable.

This kind of personal touch is something Beach Club has become known for.

While there’s plenty of relaxation to be had, for those who are looking to be a little more active there is plenty to keep you occupied. 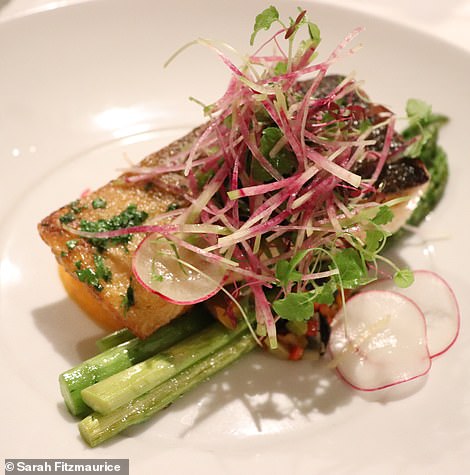 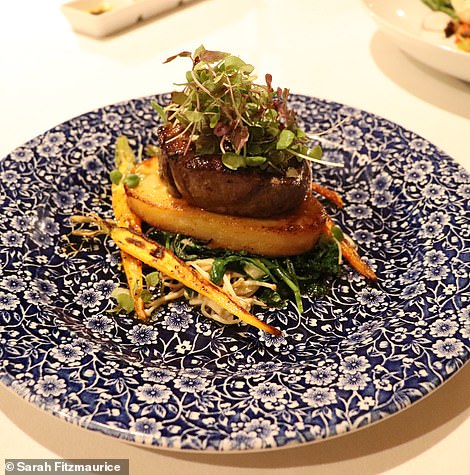 One evening Sarah and her partner sampled contemporary Australian cuisine at the restaurant within Beach Club itself.  They feasted on a mix of dishes including pan-seared New Zealand salmon on a bed of sweet corn puree (left) and a fillet of beef on a bed of potato gratin (right) Sarah said one morning at breakfast she ‘let the baby decide’ on the menu, and she ended up with a huge plate of pancakes drizzled in maple syrup and berry compote, whipped cream, a pain au chocolat and a daily juice 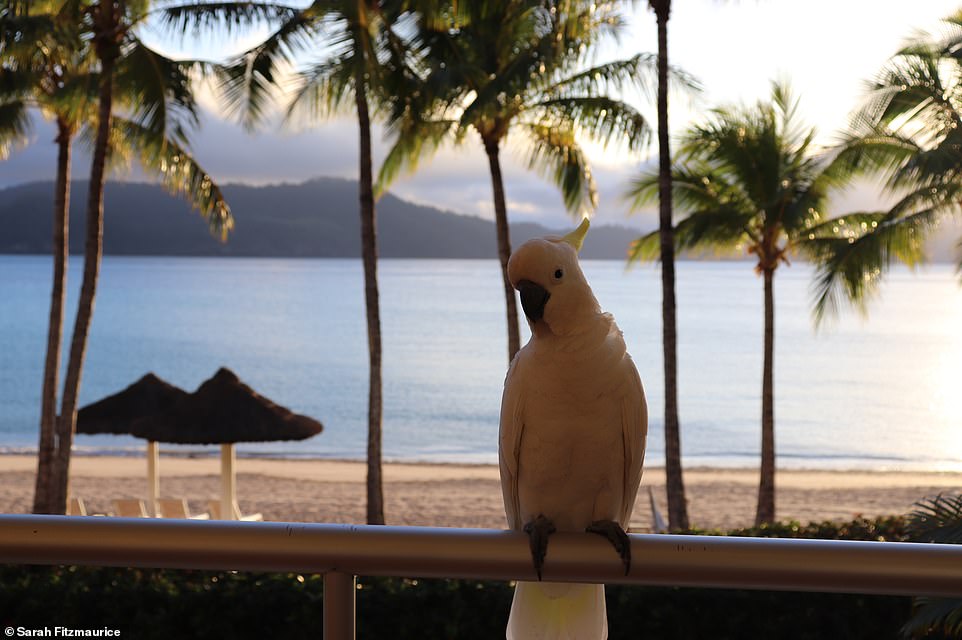 During her stay, Sarah was greeted by several local residents – including this friendly cockatoo 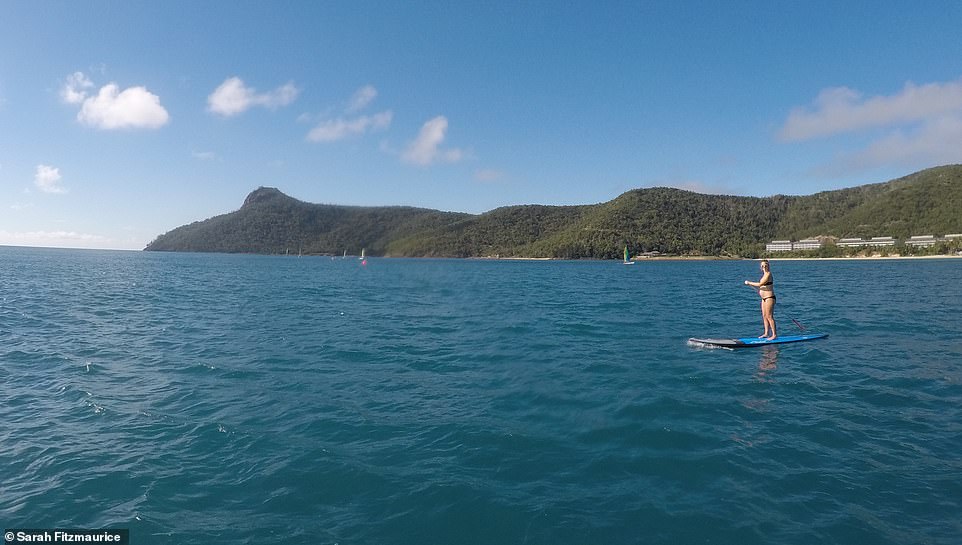 For those looking to be a little more active, Sarah says there is plenty to keep guests occupied. She took out a paddleboard in the hope of seeing some turtles, but the animals proved elusive

Guests can take out kayaks, snorkels or paddleboards for free at their leisure in Catseye Bay or embark on a daily turtle exploration by boat or a larger day tour of the wider Whitsunday islands.

Sadly our short trip meant that we didn’t have enough time to venture too far – we took paddleboards out a short distance from the sand in the hope of seeing some turtles, but the animals proved elusive.

All too soon our weekend in paradise was over and we found ourselves back on the plane to a rainy Sydney.

With the impending sleepless nights ahead of trying to keep a newborn alive I will try and envisage my happy place – a tranquil hour in the early hours of the morning watching the sunrise over Catseye Bay, listening to the birds singing, the sea lapping the shore and taking in deep breaths of the salt-infused air.

Too bad it feels like a lifetime ago already.

Sarah was hosted by Beach Club where rooms start at $720 a night.