‘No, Michael Jacksons, plural,’ I reply, before reminding them the King of Pop popped off some years ago and we’ll actually be seeing a musical extravaganza featuring people who vaguely resemble him.

My wife, daughters and I are discussing the evening entertainment at a Haven holiday park in Pwllheli, North Wales, where we’ll be staying for the week.

Called Hafan y Mor (‘Haven by the sea’), it’s a sprawling family-friendly site in the shadow of Snowdonia National Park.

As a security man waves our car through the entrance gate, I tell the kids that according to legend, a fierce giant once lived on the slopes of Snowdon, Wales’s highest mountain, and that he used to kill kings, shave off their beards and weave the hair into a cloak he wore.

This attempt to kickstart a discussion on local folklore falls flat, as they reply: ‘Can we go swimming today? Please!’

Hafan a good time: Nick Enoch and his family spent a week at Hafan y Mor – a Haven holiday site in Pwllheli, North Wales. One of the most popular on-site attractions is Splashaway Bay (above), which includes a wave machine, lazy river, slides and flumes 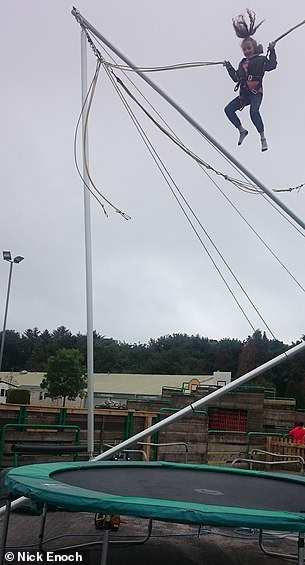 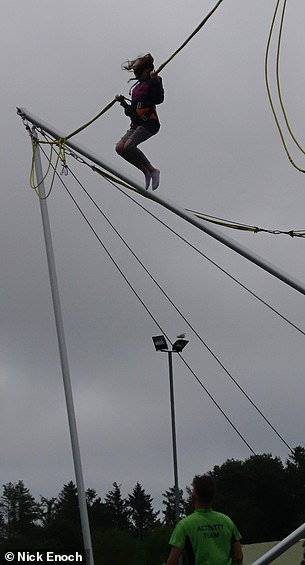 Jumping for joy: Two of Nick’s children have a go at bungee-trampolining, under the watchful gaze of camp staff. The more confident you are, the higher they’ll bounce you 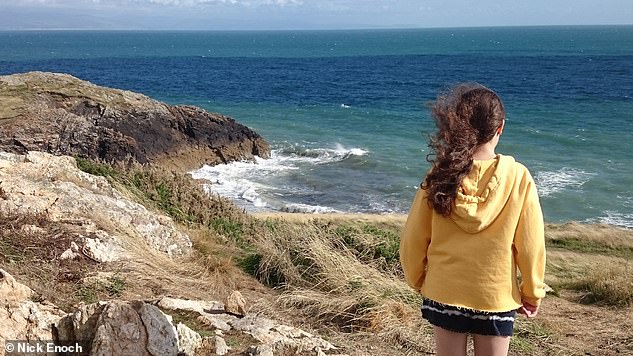 No phone… for a week? Middle daughter Katie looks out over Cardigan Bay – a few minutes’ walk from the family’s accommodation – as she contemplates a brief mobile-less existence

(As they shall find out later, one does not simply go swimming at Haven. It is home to Splashaway Bay: the largest indoor pool complex in the region, complete with water slides, flumes, lazy river and wave machine.)

At reception, the smiliest woman I have ever seen hands us a map and keys and we head off to our accommodation: a luxury lodge in the £1million Fairways development, unveiled last May.

En route, we pass parents with the occasional dog (pets are welcome, too) trailing behind their eager charges – several on bikes, scooters, go-karts and even ‘junior’ Segways, which are all available for hire. 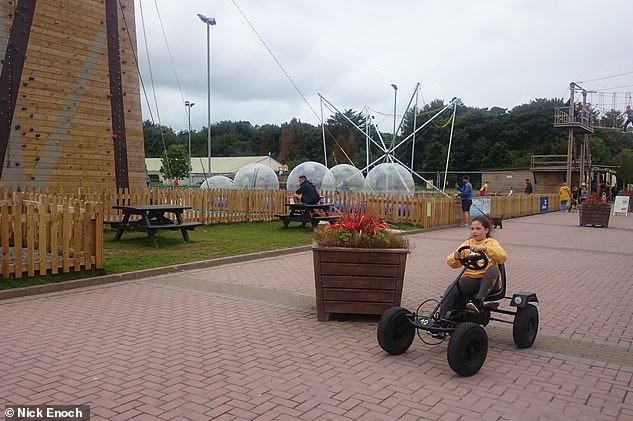 A la kart: Among the activities available are go-karting and (above in the background) a climbing wall and ‘Water Walkerz’, where you move along in a giant waterproof bubble

Some are heading to the sportsdrome and soft play area; others, to the pedalos and bungee-jump trampolines.

We also catch a tantalising glimpse of the (very popular) aerial treetop assault course, where hard-hatted souls, young and old, climb steps to a sky-high walkway and zip wire across a lake into a canopy of leaves.

There are various dwellings at Haven, ranging from caravans and apartments to pine lodges with soaring triangular sides – great for pointing out a living example of isosceles to maths-inclined nippers. 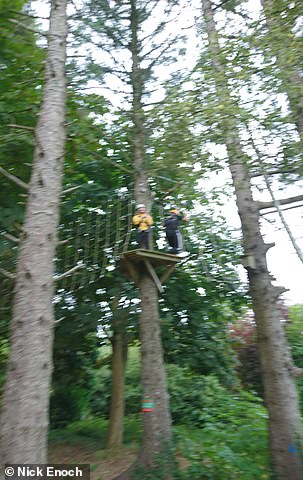 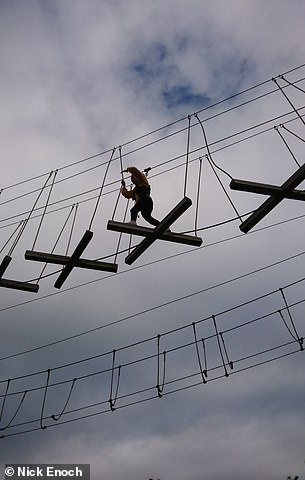 Top of the copse: The Aerial Adventure high-ropes course is very popular so it’s best to book as early as you can. It can take up to an hour to complete the circuit 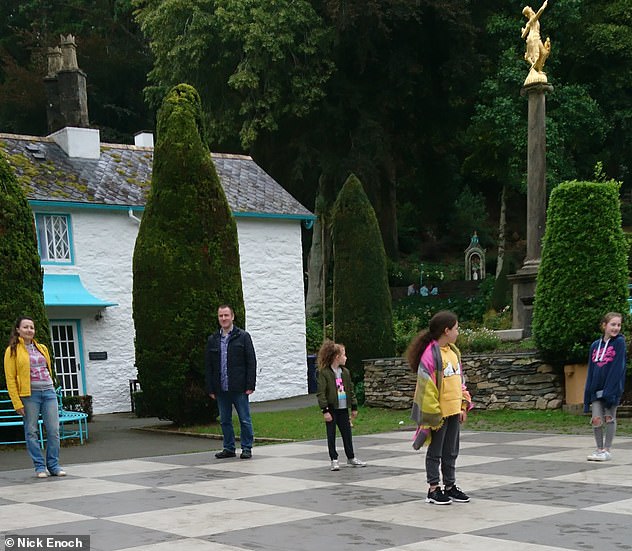 Village people: Portmeirion – the setting for cult 1960s’ TV show The Prisoner – is a 20min-drive from the holiday park. Above, the Enochs soak up the surreal Italianate surroundings as they pose on the giant outdoor chessboard

We are staying in a three-bed caravan lodge with surround decking, which is built around a man-made lake near the seaside and a golf course.

As we step inside our faux-timber lodge, the kids run down the narrow hallway to ‘baggsy’ their beds.

The wife and I gawp at the fully fitted kitchen and living room, with two plush sofas and a big flat-screen TV – and there’s even carpet and curtains.

(Television should be off-limits. But before breakfast and bedtime, we introduce our children to Challenge TV, including the wonders of Dale Winton and Bruce Forsyth on Supermarket Sweep and The Price Is Right respectively.)

Cardigan Bay, and the Irish Sea, is a five-minute stroll away. Here, a band of pebbles ripe for skimming gives way to a secluded sandy coastline, where you can jump waves, have a dip or hunt for hermit crabs among the rock pools.

Coastal walks along the cliffs command majestic views over the bay – majestic apart from two sets of abandoned underwear we notice in the grass. (Negligent skinny dippers? Or perhaps an amorous couple who spontaneously combusted.) 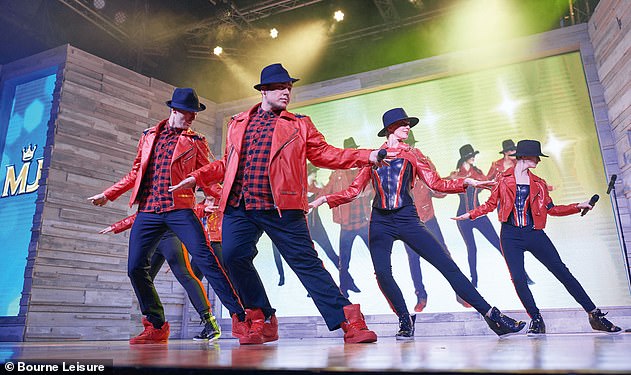 Michael Jacksons! The MJ Legend theatre troupe at Haven pay tribute to the singer with a medley of his hits from his time with the Jackson 5 through to his solo career 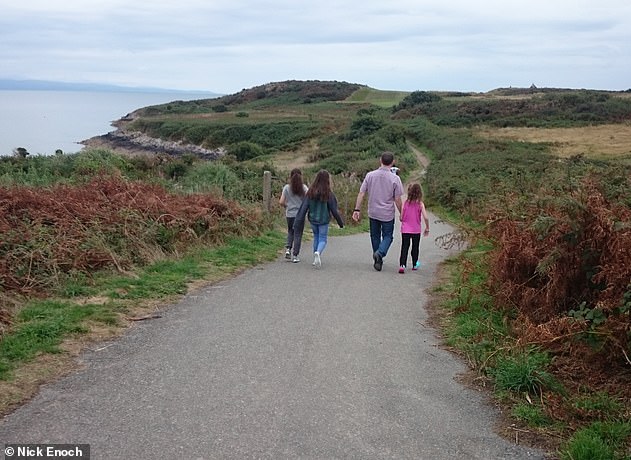 If you fancy some peace, there are wonderful coastal walks with views of Cardigan Bay

Holiday food is always a thrill for kids. Ours (aged nine, 11 and 12) get a mixture of ‘mum cooking’ plus the occasional special outing.

For self-catering, there are two well-stocked but slightly overpriced mini-marts on site – and we soon find the Asda, a 10-minute drive away.

There’s also a Burger King, Starbucks and Papa John’s at Haven if you can’t resist a bit of High Street nosh. Other on-site options include a fish and chip shop or the Cockney-sounding bar and restaurant Mash & Barrel. 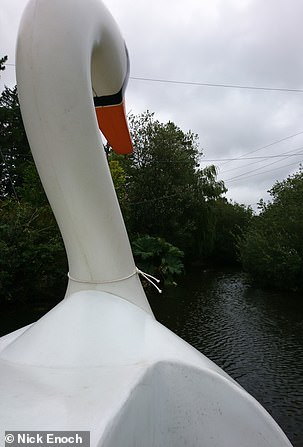 It’s what Marc Bolan would have wanted: You can ride a white swan (pedalo), while adventurous types zip-wire overhead

(For those who can’t live without their phones, there’s free wi-fi: 300MB per day; you can pay extra for more.)

If you’re going on a Haven holiday, it’s best to buy ‘activity bundles’ in advance, as a) it can work out cheaper than paying once you’ve arrived; and b) some activities have to be booked, otherwise they may not be available on the day you want, especially in peak season.

We reserve the treetop aerial adventure – a mixture of zipwire and rope-bridge challenges – but there is a height restriction; our youngest was gutted she was too short.

Her sisters, and my wife, do have a go, whizzing in a harness 40ft off the ground above a lake containing terrifying beasts (actually, giant swan pedalos.)

Some zipwirers fail to ‘land’ at the pole station at the other end and sit dangling in the air. (If you do get stuck, staff are on standby to rescue you within minutes.)

It takes anything from 10 minutes to an hour to finish the course – and one of my daughters does get stuck. After a brief panic, she does as shown in pre-zip training and pulls herself along to the landing station.

Meanwhile, for budding Bear Gryllses, there is Nature Rockz. What sounds like an earthy album by 70s’ glamrockers Slade is in fact a lesson in outdoor skills. 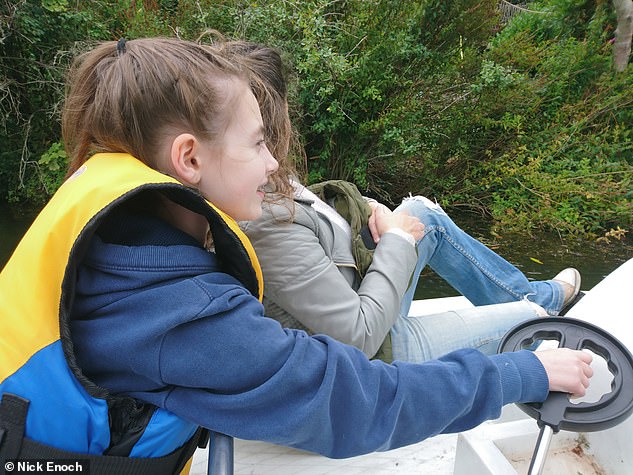 The sessions (which you’ll need to sign up for) give children the chance to study bushcraft and get close to wildlife: from learning how to start a fire to identifying an animal from its tracks.

As for the Splashaway pool complex, our daughters love it; the water’s warm, the queues move fast and the wave machine is a blast. (Arrive early, though, as the changing rooms get very busy.)

The bungee-trampolining is great fun, too. The staff start you off gently and if you’re willing, they’ll bounce you very, very high.

Meanwhile, beyond Haven lies a world rich in history and scenery to explore.

A 20min drive away, we visit the ‘Italian’ village of Portmeirion – aka the setting for cult 1960s’ TV show The Prisoner.

I try to explain the programme’s concept of Man’s captivity to the little ones, but quickly give up and suggest they just stand on the giant chessboard in the heart of the village and have some ice cream instead. 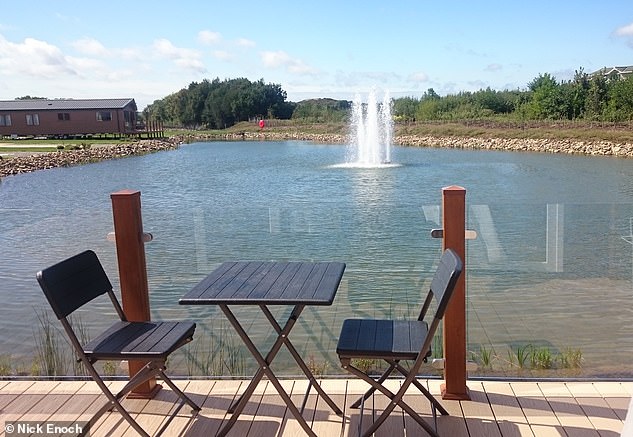 Oh my gush: The Enoch family’s home for the week  – a luxury caravan on the secluded Fairways development – looks out onto a man-made lake and is a pebble’s throw from the beach

We also visit Beddgelert, a quaint little community surrounded by the gorgeous peaks of Snowdonia. It’s also a short drive away – via the sort of narrow country lane that car insurance policies are made for.

It’s big on eateries (every other shop is a pub, cafe or restaurant) – not so big on pavements, so keep your kids close.

It was also home to Alfred Bestall, who illustrated Rupert the Bear stories. (Trivia: Bestall’s illustration of singing frogs which appeared in one Rupert annual inspired Paul McCartney’s We All Stand Together frog chorus ditty.)

The high point of our day trips is, technically, the lowest point: 500ft underground. In a slate mine. 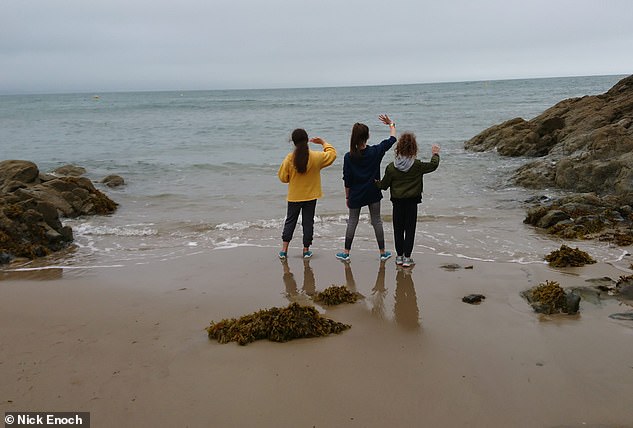 Waving goodbye: The girls bid farewell to the bay before packing up and heading home to London

Our tour of the Llechwedd Slate Caverns proves to be a powerful – and emotional – experience, led by a man named Rich, whose ancestors, stretching back six generations, worked these very mines.

He tells us of how, in 19th century British mining communities, children as young as 12 would assist men as they searched for slate in candlelit darkness, in temperatures averaging 5C.

It was an age before compulsory schooling, and health and safety laws.

For the men below, lung disease was rife and life expectancy was short. And they had just three days off a year (Christmas Day, Good Friday and Easter Monday). 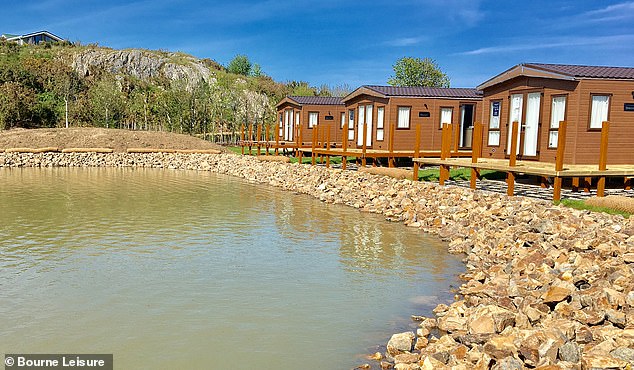 The lodges at the Fairways development (pictured) were unveiled last May

For my girls, with all the comforts of modern life, it’s quite a wake-up call.

On the journey back to Haven, they view the slate roof tiles on the houses we pass in a new light.

Back at camp, we look through the programme of night activities: from karaoke and bingo, to family disco and games show night.

And, of course, that Michael Jackson theatre performance.

The male, and female, performers do a good job and play to a packed house on the evening we attend.

And as they belt out his hit songs, I look at my family (my very own Pretty Young Things) and wonder if they’ll Remember The Time they went to Haven in years to come, because as far as staycations go, it might be hard to Beat It.

Haven is offering up to 25 per cent off all 2019 self-catering holidays if booked before February 18.

It is also offering a three-night weekend self-catering holiday staying at Hafan y Mor Holiday Park in Pwllheli – prices start from £408.75 (saving 25 per cent) per family.

Price is based on a family of six sharing Deluxe accommodation on August 2 and includes family-friendly entertainment. (There is also a four-night midweek self-catering option, with prices starting from £231.75 per family.)