We ordered two glasses of wine on room service – and the waiter that brought them opened the bottles in front of me in the room and asked if I’d like to try them first.

A most splendid, Sommelier-style touch.

But not a surprising one, because the hotel was the St Regis Bal Harbour Resort in Miami Beach – graced in the past by Michelle Obama, Will Smith, One Direction, Sofia Vergara, Sharon Stone and the Manchester United football team – where nothing is too much trouble and splendid touches come as standard.

The St Regis Bal Harbour Resort in Miami Beach (one of two pool areas pictured) has been graced in the past by Michelle Obama, Will Smith, One Direction, Sofia Vergara, Sharon Stone and the Manchester United football team

As I heaved myself out of one of the pools one morning an attendant trotted over and handed me a towel.

When our baby daughter began screaming at the breakfast table, a waitress trotted over with crayons and a picture for her to colour in.

The staff members – every one of them – could only ever be described as eager to please.

But, surprisingly, there was a but…

And that’s because some possibly over-egged things on the eagerness front.

Namely, those masters of towel distribution – the pool attendants.

They were friendly to a fault, but prone to materialise just as a blissful tonic state approached and ask if we’d be back later or the next day and coo at the baby for rather long stretches of time. 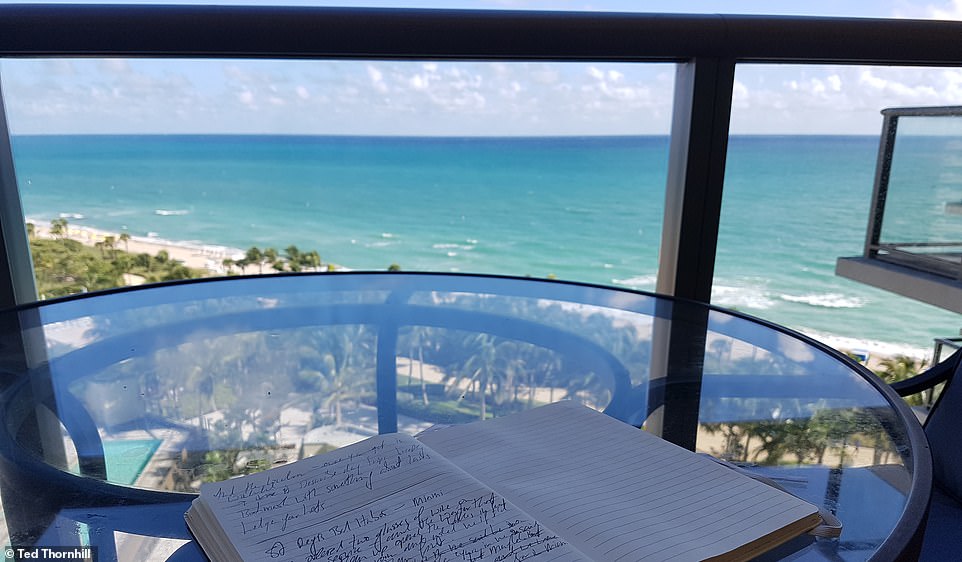 Room with a view: Ted’s lofty terrace was the perfect place to write up his account of his stay 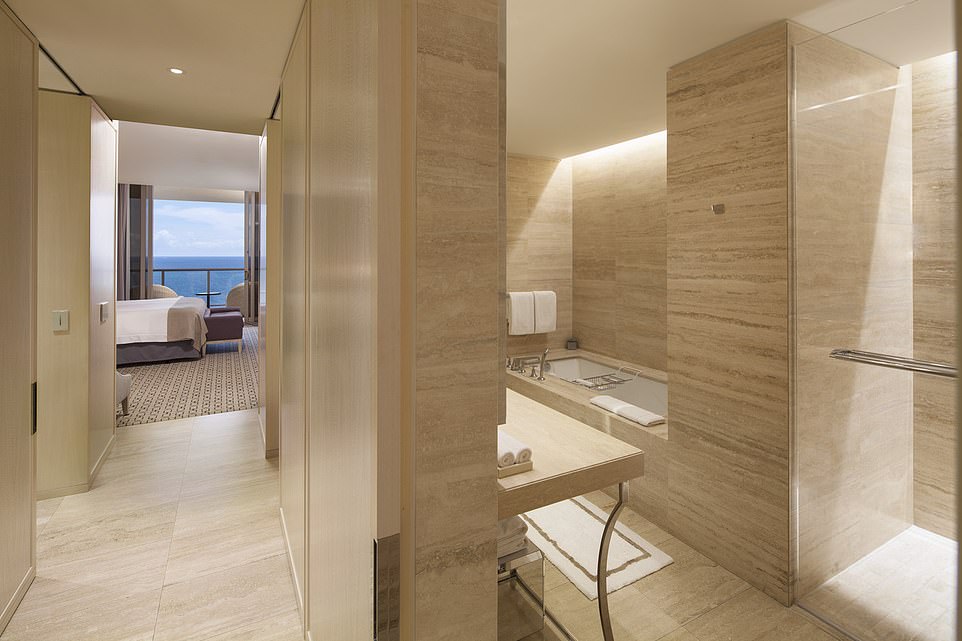 Ted stayed in a Grand Luxe Oceanfront Room, which boasted a rather fine bathroom and supremely comfy beds 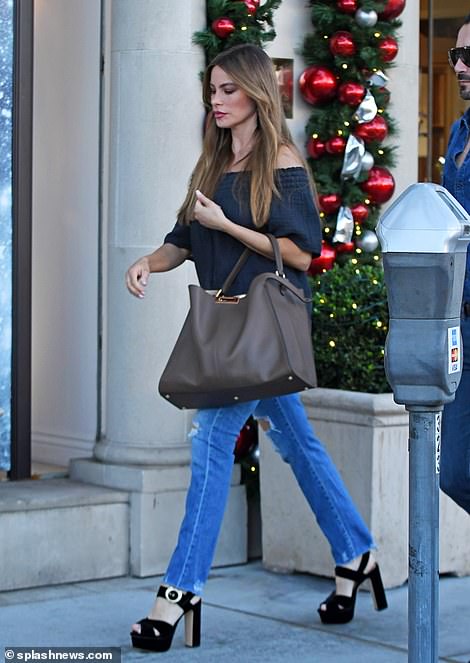 The baby loved the bonhomie, but my jaw muscles began to ache from smiling.

One afternoon one of the chaps walked with us to the hotel entrance as we departed, handed me his boss’s business card and asked if I’d email him to tell him what a great job he was doing.

I wasn’t sure that was strictly five-star hotel protocol – and I’d come on holiday to stop thinking about sending emails… so I was reluctant to oblige. But in the moment I couldn’t bring myself to say no.

The result was that the beautiful pool area (one of two at the hotel) at this point became strangely stressful. Fearing that we’d be accosted the next day and grilled on the contents/formatting of the promised boss missive, we didn’t return.

Instead I devoted more time to mastering our bedroom’s puzzling lighting system, which had proved to be the cause of much brow furrowing.

On the first night we slept with the hallway lights on because in our jet-lagged state we couldn’t figure out how to turn them off and kept turning everything on as we prodded helplessly at various panels.

Each area had its own panel. The problem was a complete dearth of off switches, and no indication as to what was already on.

For instance, in the bathroom you could turn the vanity mirror, and tub and mirror, on and off and the whole bathroom system on and off with ‘bright’ and ‘soft’ settings.

But little green lights were constantly illuminated by every label and every setting left the room brightly lit – even ‘soft’ – so achieving darkness was a grimace-inducing game of trial and error.

The confusion with the hallway light was that, unbeknown to us at first, it operated by way of sliding a finger up and down a dimmer panel, from a ‘minus’ sign to ‘plus’. You needed to press the ‘minus’ symbol at the bottom to turn it completely off.

Who invented this contraption? Seriously, I wanted a name and address. 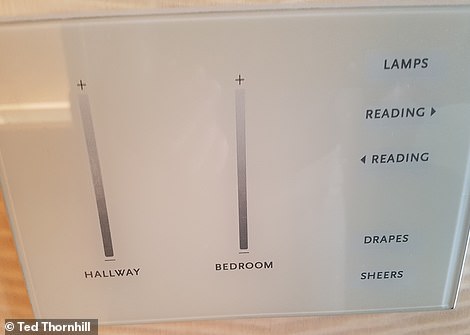 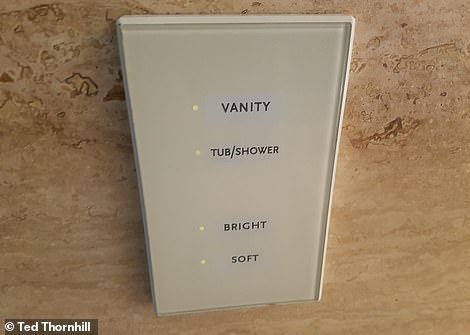 Puzzling: Ted, in his jet-lagged state, found his bedroom lights rather confusing – mainly because it was hard to figure out how to turn them off. The hallway and bedroom lights were operated by way of sliding a finger up and down a panel (left). Pictured right is the bathroom lighting system – which continually indicated that everything is on 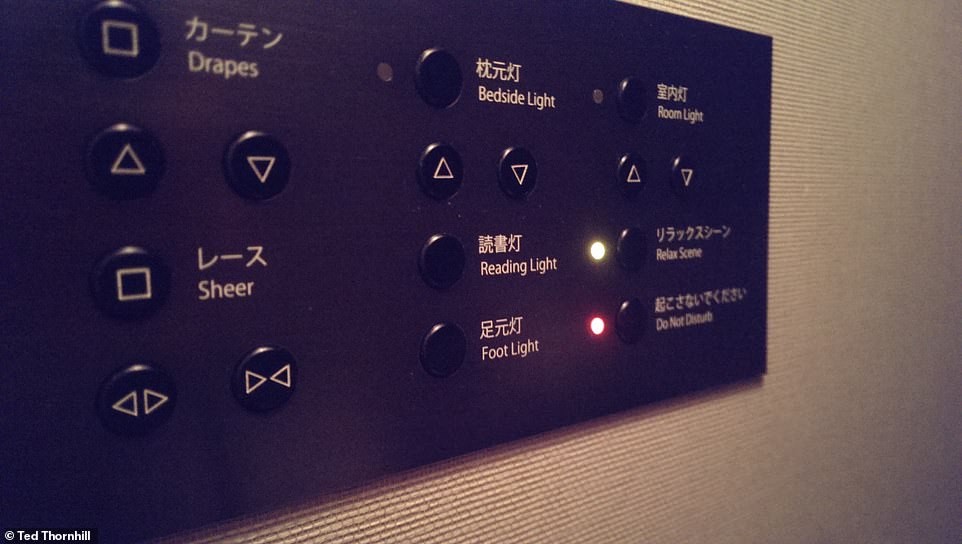 Truly jet-lag friendly lighting: At the Palace Hotel in Tokyo it’s possible to bring about a lovely soft glow throughout the bedroom by hitting a button labelled ‘Relax Scene’ (pictured) 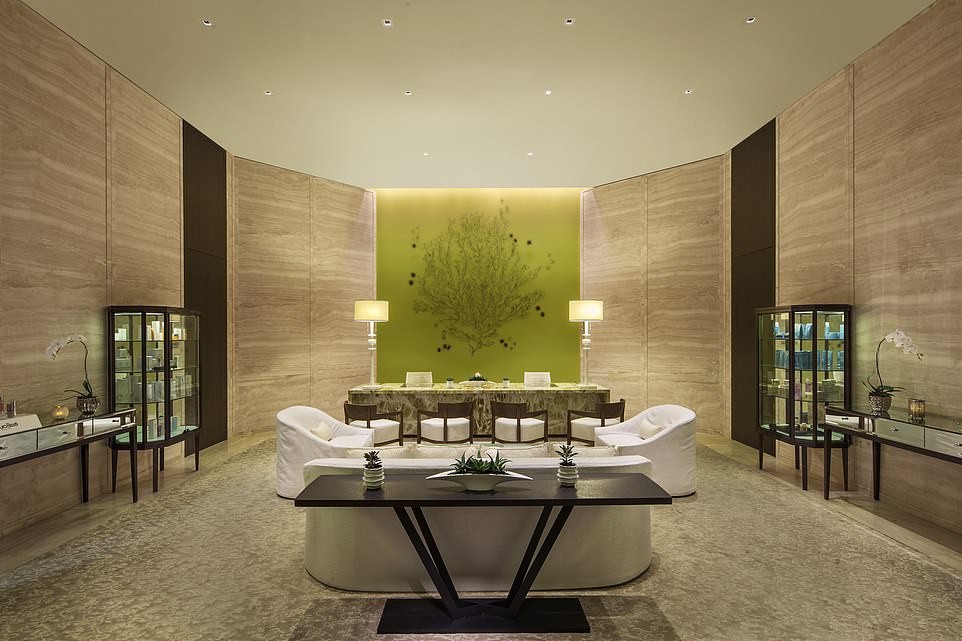 The Palace Hotel in Tokyo, incidentally, has just such a button. And actually, the St Regis in Aspen has a genius night-time light situation – a gentle foot-level glow comes on automatically when you walk to the bathroom.

Our Grand Luxe Oceanfront Room, as we discovered amid a blaze of bulbs, was just spiffing.

The beds were ultra-comfortable, the pillows exquisite, the tub gloriously deep, the shower wonderfully powerful, the dressing room with its mirrored drawers brilliantly bling-y and the décor marvellously muted. 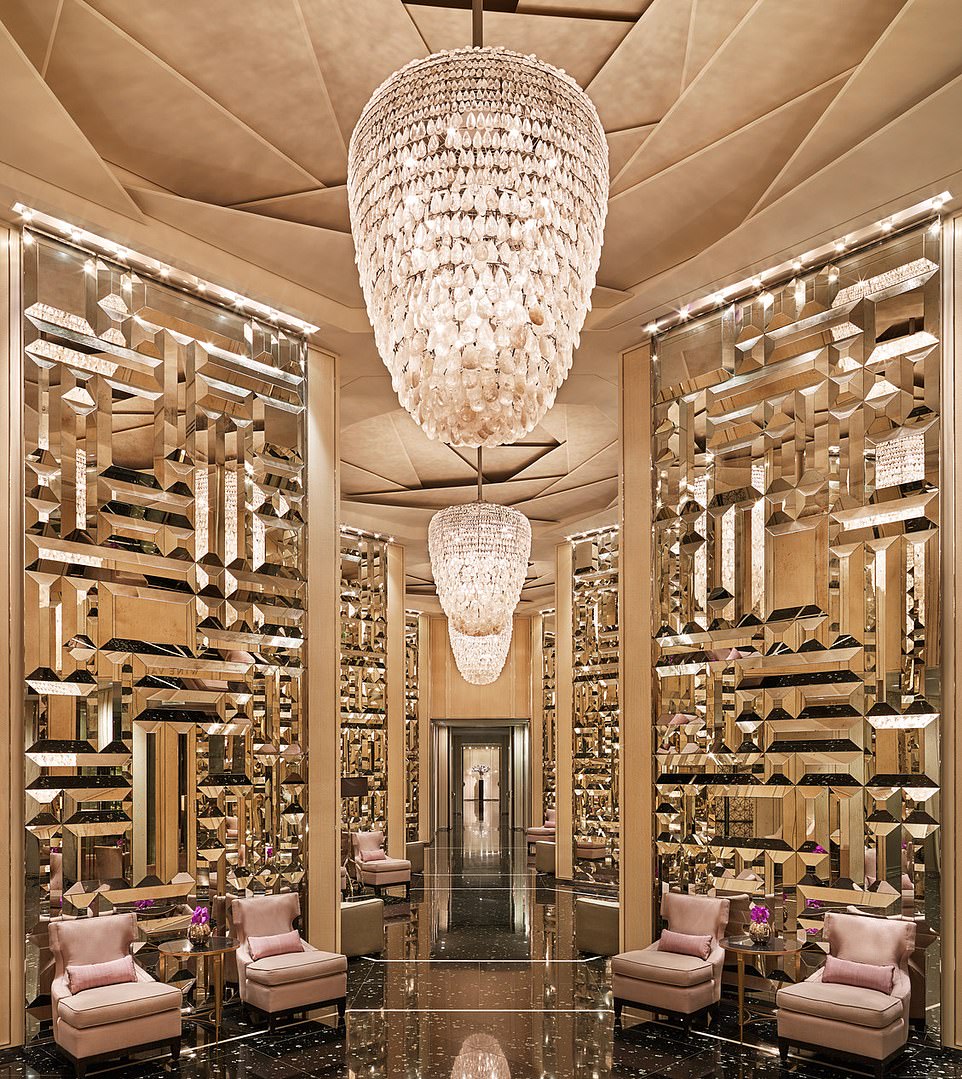 The St Regis has grand swank – the lobby, for instance, is decorated with huge chandeliers that hang over black marble floors

And we had a terrific terrace with an ocean view.

The beach is mere yards away and the St Regis has a private section of sand every guest can relax on, on a lounger if so desired.

The ocean was a bit rough on our visit, though, and the crashing waves scared the baby, hence we gravitated towards the pool (until pool-boss-gate), which has lots of comfy loungers, too, and plenty of umbrellas for shielding pale Brits from the sun.

The hotel has some food and beverage options worth a hat tip, too.

You can indulge in an afternoon tea with smoked salmon and caviar sandwiches, sip a Hemingway ‘Papa’s’ Daiquiri at the bar, watch a game in a cosy booth in a burger joint or sip wine in the lobby-level vault, which houses approximately 2,500 bottles from 450 vineyards and 14 different countries. 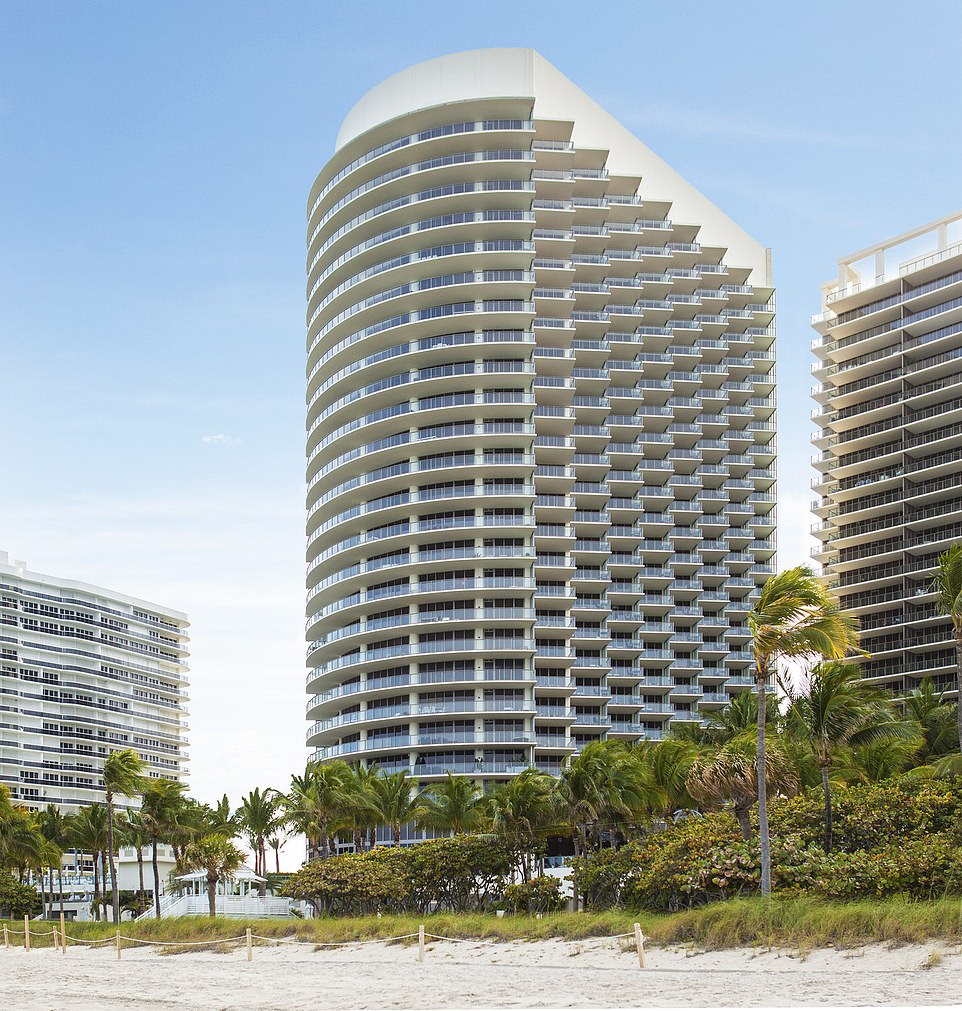 The beach is mere yards away and the St Regis has a private section of sand every guest can relax on, on a lounger if so desired 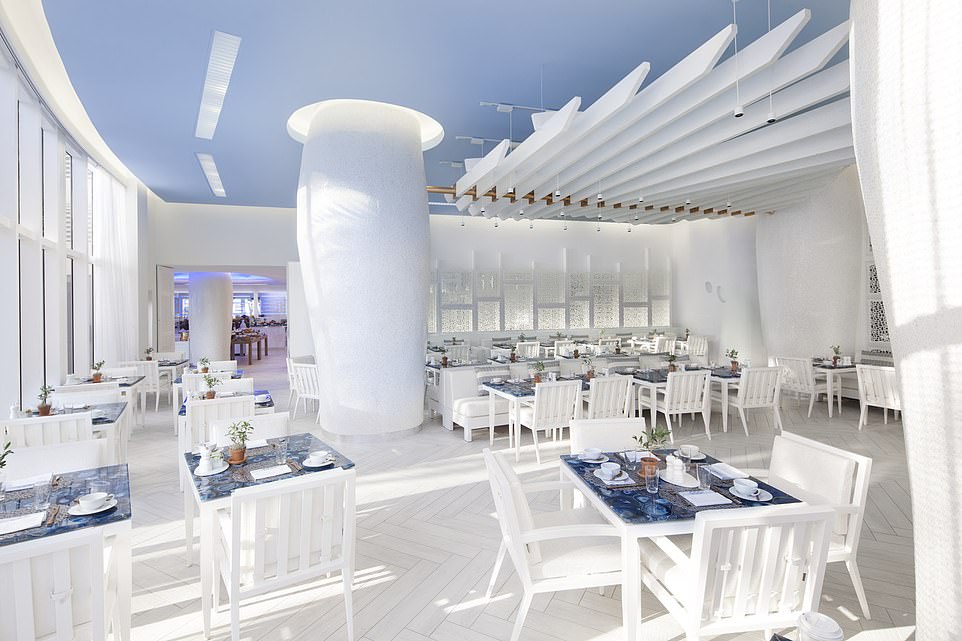 Breakfast is served in the excellent, Greek-themed Atlantikos restaurant (pictured) 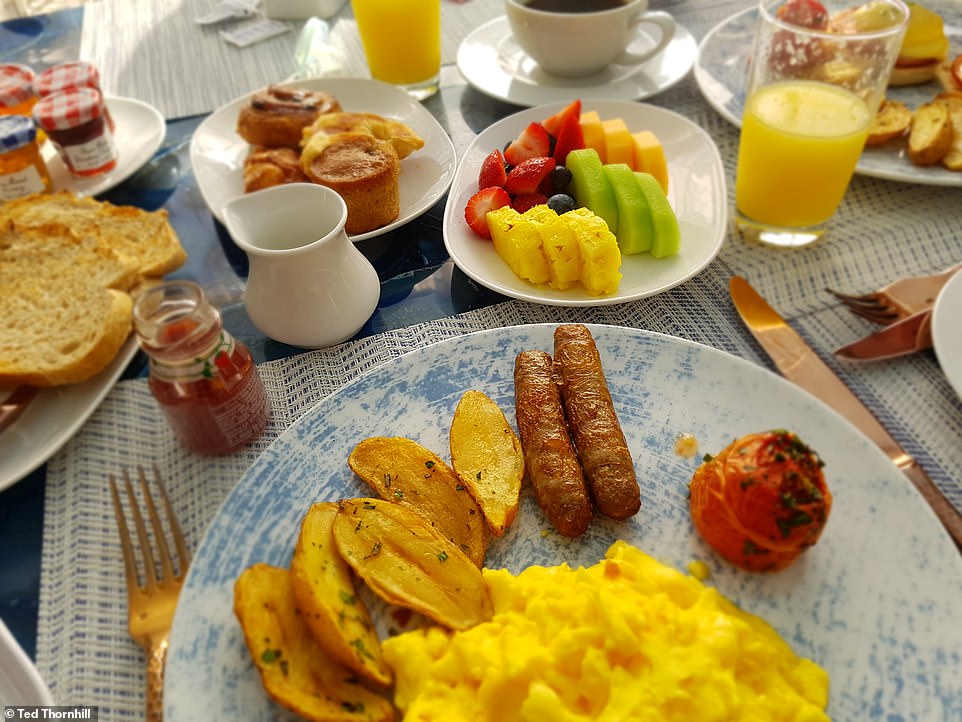 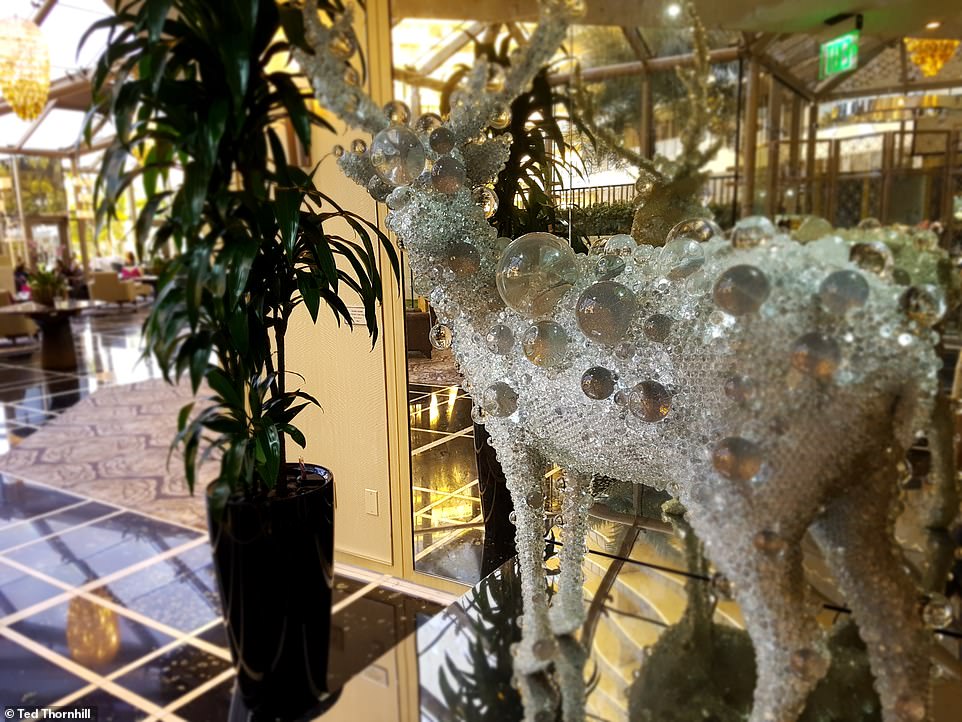 Stag-gering: The St Regis Bal Harbour definitely knows how to bling-up the decor 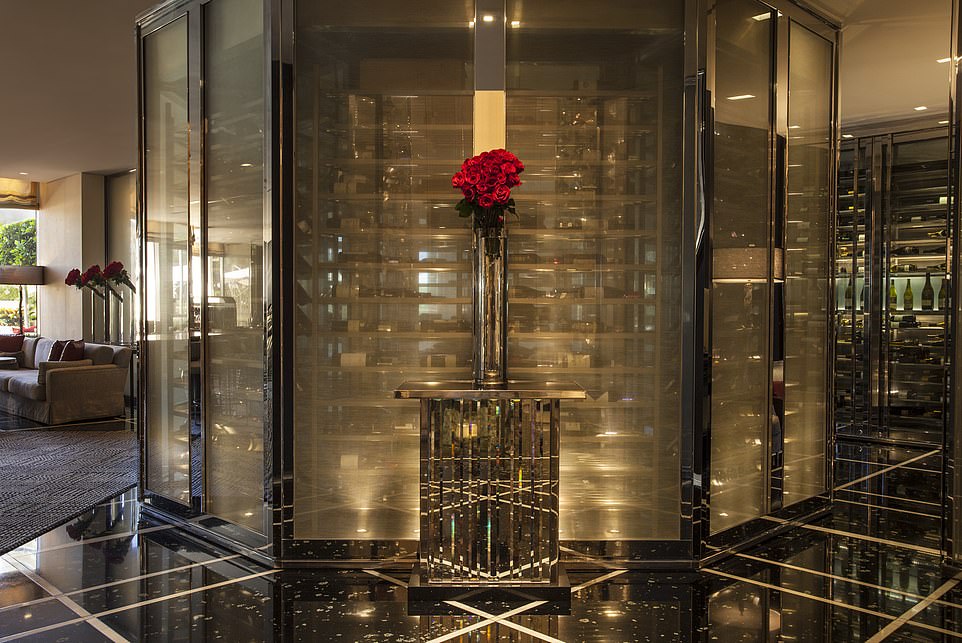 A huge selection of fine wines are available to quaff. The lobby-level vault (pictured) houses approximately 2,500 bottles from 450 vineyards and 14 different countries

Breakfast, meanwhile, is served in the excellent, Greek-themed Atlantikos restaurant (really sorry about the screaming).

The St Regis has some grand swank, too – the lobby, for instance, is decorated with huge chandeliers that hang over black marble floors (black Chinese god flower stone to be precise). No wonder the famous types flock there.

Of course, all this eye-popping luxury comes with a price. Rooms cost from $649 (£504) per night and there’s a mandatory $35-per-night resort fee on top of that. This buys you bike hire, free cocktails and more – but really should include a bedroom light butler and a T-shirt emblazoned with ‘you’re doing a great job, your boss is proud, oh fine, just one more mojito then’.

For flights from London visit ba.com. The carrier’s lead-in fare for flights to Miami is £310 return.