RHOBH star Erika Jayne, 49, is seen for the first time in public WITHOUT her wedding ring… after separating from husband Tom Girardi, 81

Erika Jayne has been spotted in public for the first time without her wedding ring in the midst of a messy estrangement from her husband Tom Girardi.

On Monday evening, the Real Housewives Of Beverly Hills star was seen spending time at a dinner party hosted at the residence of her costar Kyle Richards.

The reality TV personality was not seen wearing her wedding ring.

Moving on: Erika Jayne was seen without her wedding ring on Monday night as she arrived to a dinner party at Kyle Richards’ house 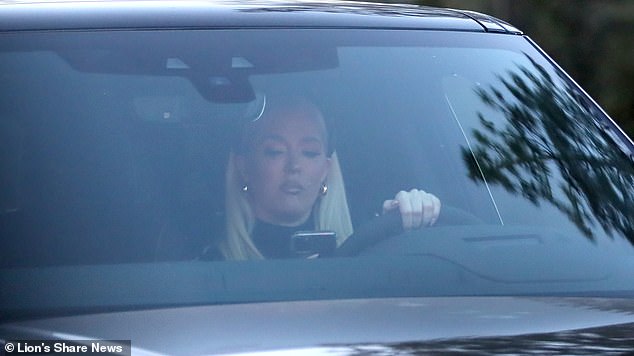 Multitasking: The Real Housewives Of Beverly Hills cast member was seen texting while driving as she arrived at her castmate’s residence 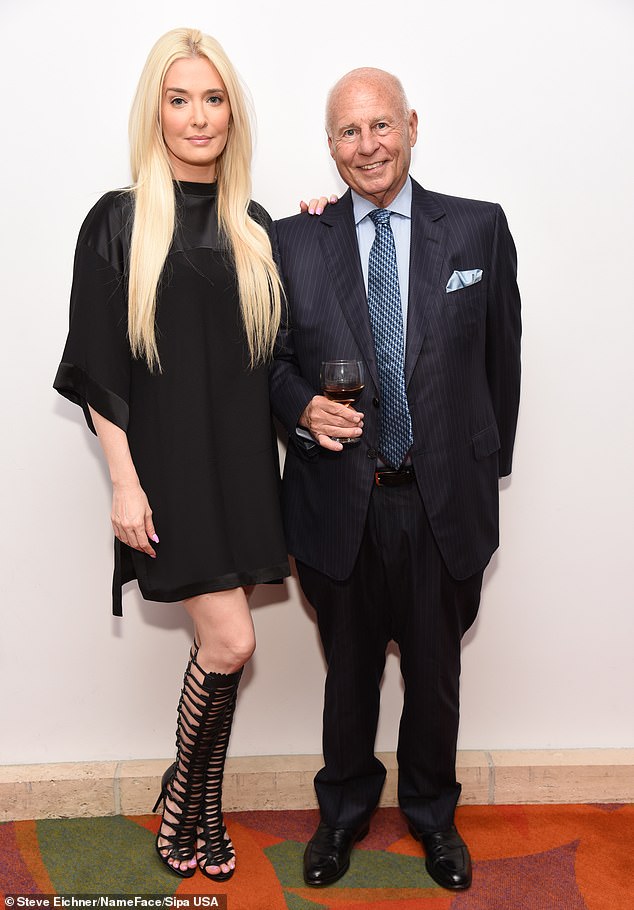 Jayne was initially spotted texting while she was driving to the house, keeping her right hand on the steering wheel and her left on her phone.

When she arrived to Richards’ place, she gave the cameras a smile before stepping out of her car.

Upon leaving the vehicle, the reality TV star did not use a face mask as she spoke with a valet.

The singer then entered the property while carrying a small square box. 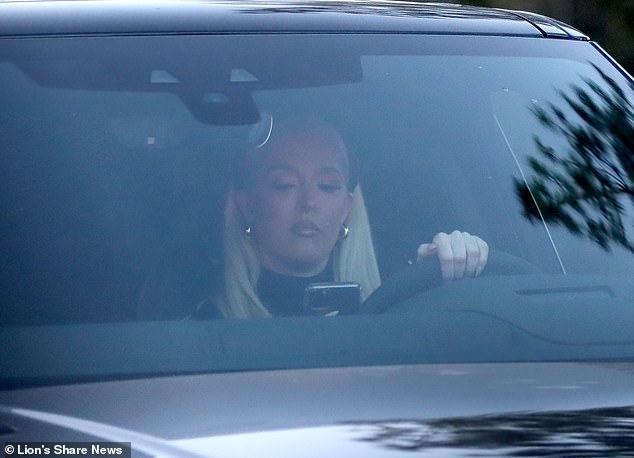 Keeping it on the low: Tuesday’s outing was the first time that Jayne had been seen in public since the beginning of her separation from Girardi 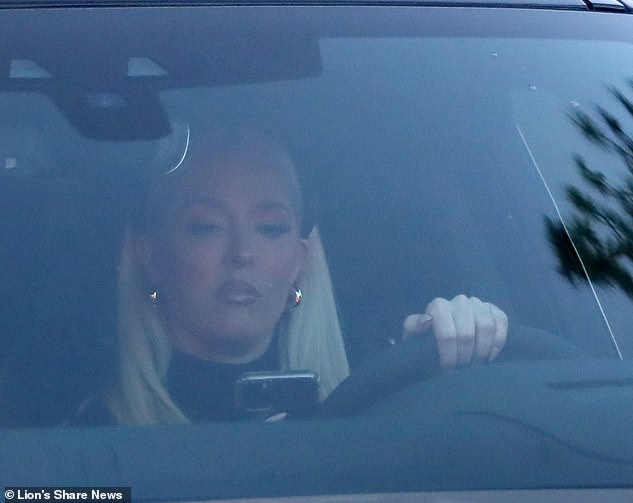 Moving on: The Bravo star announced her separation from her estranged husband in November 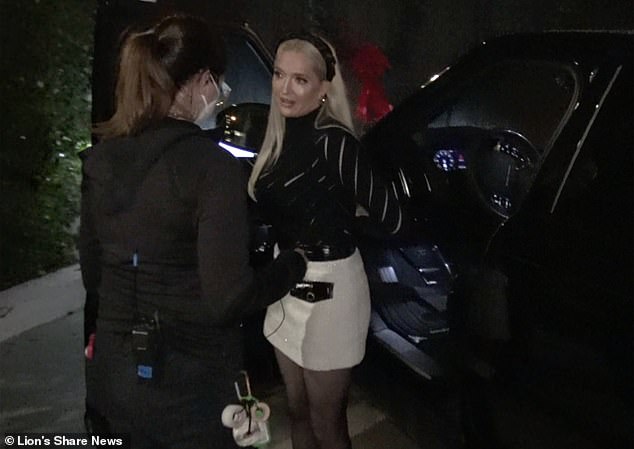 Taking care of things: The reality TV personality was spotted speaking with a valet as she arrived at Richards’ house 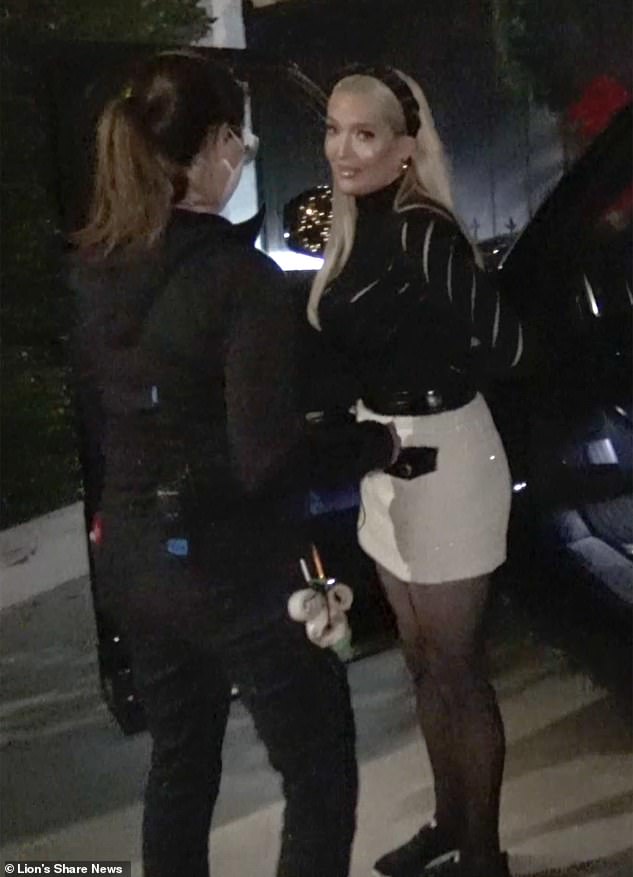 Not taking precautions: Although the valet wore a face mask, Jayne did not seem to have a problem without one 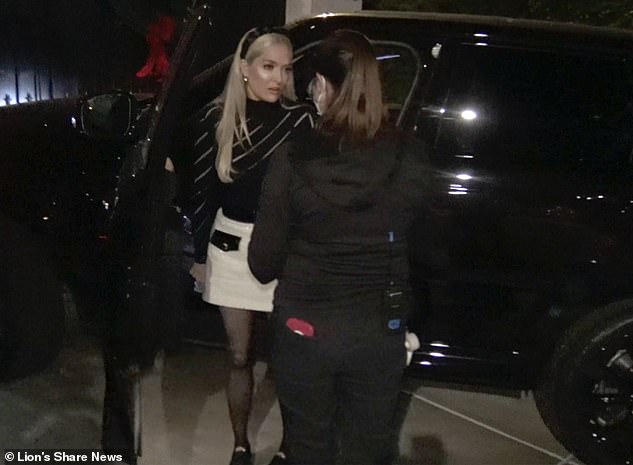 Compromising safety: Jayne stayed within six feet of the valet, apparently not having any regard for social distancing protocols

The television personality wore a black long-sleeve shirt with cutouts that was contrasted by a white miniskirt and a pair of dual-toned sneakers to match her outfit.

Jayne styled her hair in a sleek straight look and accessorised her monochrome outfit with a black headband.

The outing marks the reality personality’s first time being seen in public without her wedding ring; she and Girardi initially separated in November.

She cited ‘irreconcilable differences’ as the reason for their split.

A month prior to that, the couple was named in a lawsuit that insinuates the two were involved in embezzling $2 million from a fund meant to compensate the families of the victims of the 2018 Lion Air Flight 610 crash. 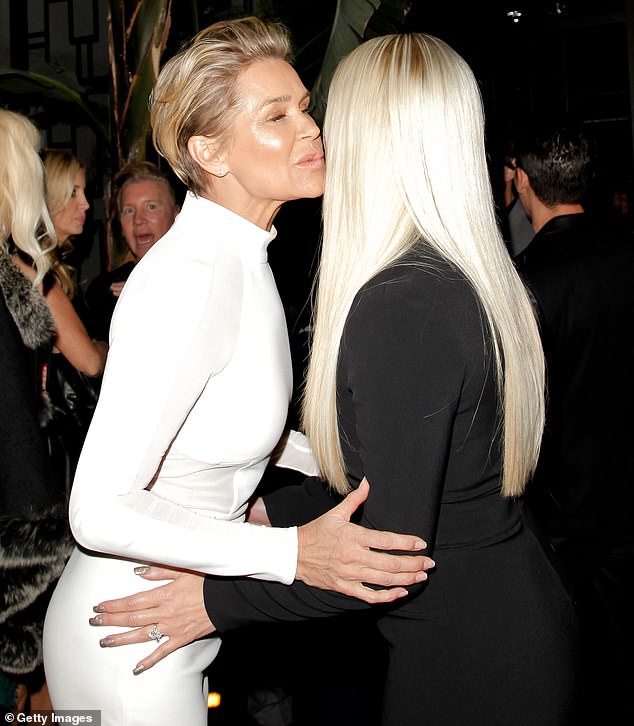 What once was: Jayne is seen wearing her diamond ring as she greets Yolanda Foster at the RHOBH season 6 premiere party in 2015 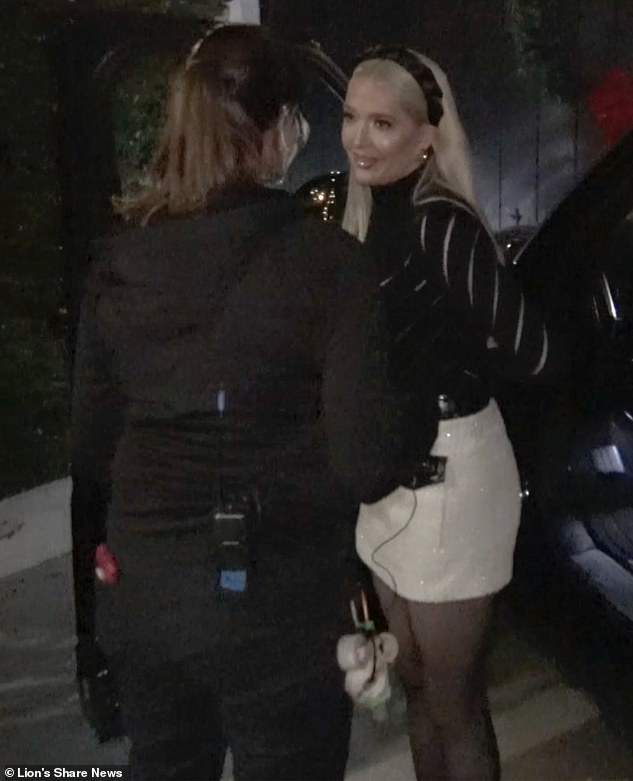 Getting wrapped up: The singer has been embroiled in a messy public separation from her husband ever since announcing it in November 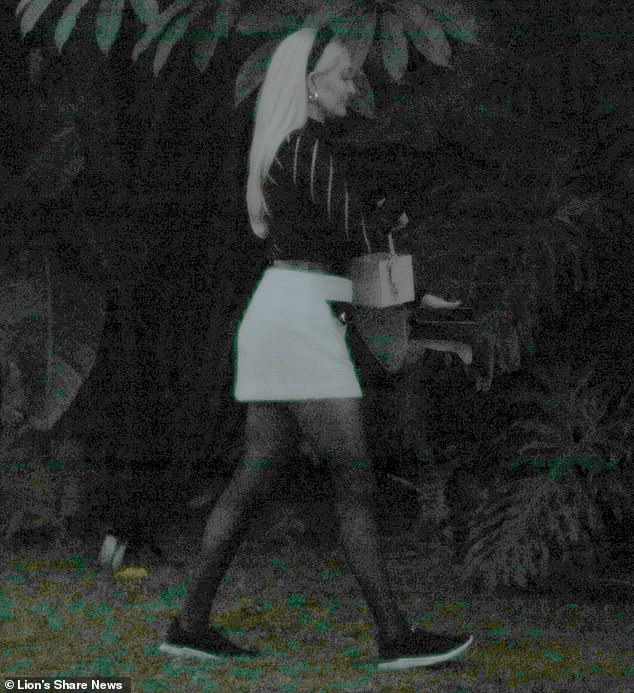 Keeping it simple: Jayne opted for an entirely black-and-white wardrobe for the dinner party 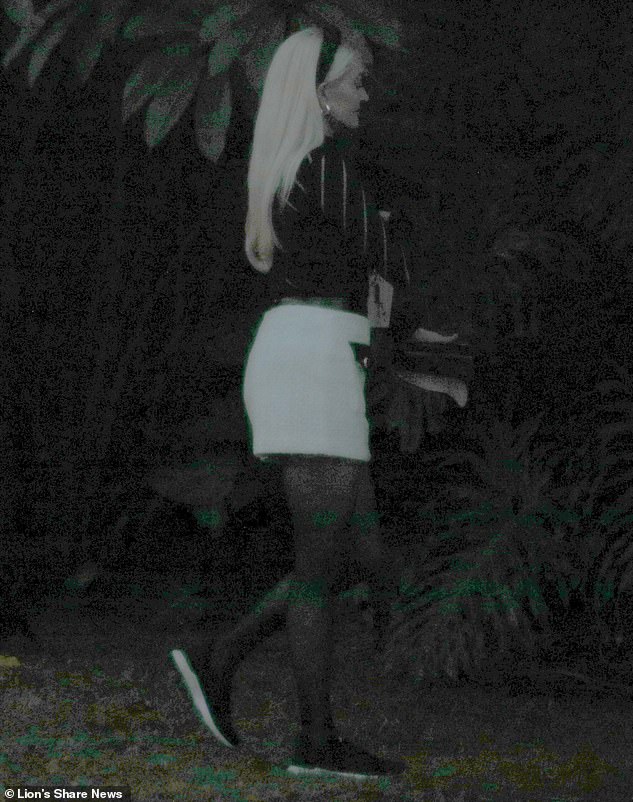 Bringing her things: The reality TV personality was seen carrying a white box along with a number of other belongings as she entered the residence

The Bravo star later claimed through her Instagram account that her husband had been carrying on an affair with a former California deputy attorney general, and shared multiple screenshots of her husband’s text messages.

The post was later deleted after multiple news outlets took notice of the story.

She also alleged that she believed Girardi had been carrying on various other affairs in addition to the one she found out about.

Jayne has gained notability for her role as a cast member on The Real Housewives Of Beverly Hills, which she joined in its sixth season. 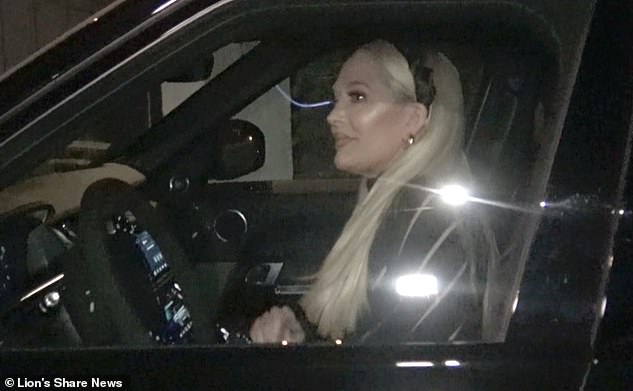 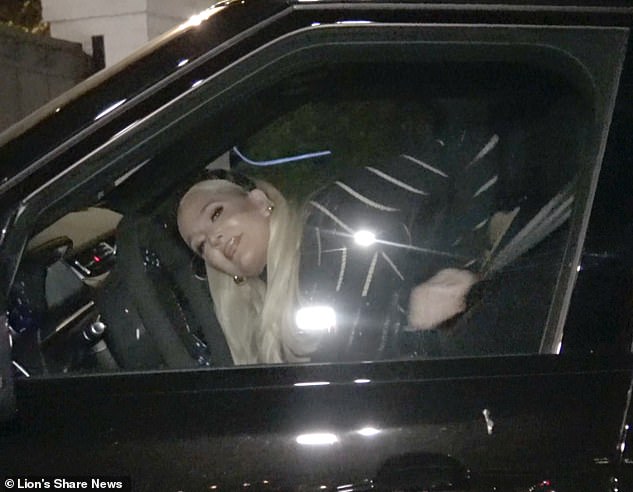 Changing her mind: The singer later removed the post from her account after she was brought under heavy media scrutiny for the images 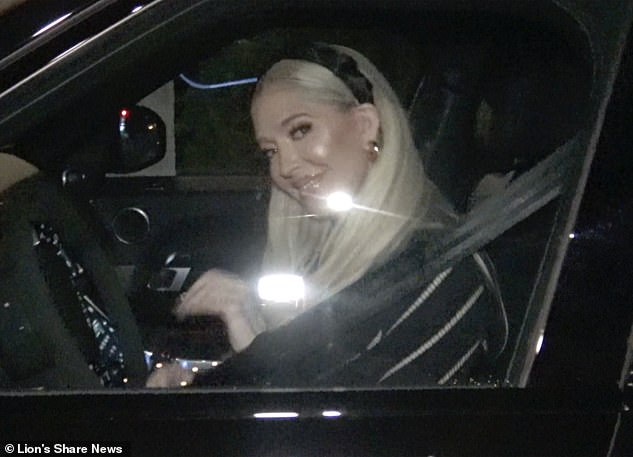 Giving a smile: Jayne flashed a grin at the cameras before leaving the dinner party