The Real Housewives of Orange County’s Kelly Dodd launched a foul-mouthed attack on former co-stars Heather and Terry Dubrow on Wednesday evening, as they were eating dinner at a public restaurant.

The feuding reality stars came to blows earlier this year, when Kelly, 46, claimed she and husband Rick Leventhal had contracted COVID-19 from Heather’s 16-year-old son Nicholas, 16.

Finding herself at the same dining establishment as Heather, 52, and Terry, 63, the ex-RHOC star – who was axed from the show this year – began to insult the couple as she filmed them over her shoulder.

Kelly said in her video that the couple are ‘suing’ her and alleged they had sent her and husband Rick a cease-and-desist letter, calling them ‘f**k faces’ as she pointed at them in her Instagram video.

‘Should I ask these a**h***s why they’re suing me?’ Kelly asked in the video. ‘Terry and Heather. Why are they suing me? I think [Rick] might ask why they put a cease and desist on us.’

The axed reality star was at dinner with Rick, 61,  celebrating her friend Marianne Rabold’s birthday – however, when she caught sight of the Dubrow family the mood swiftly changed. 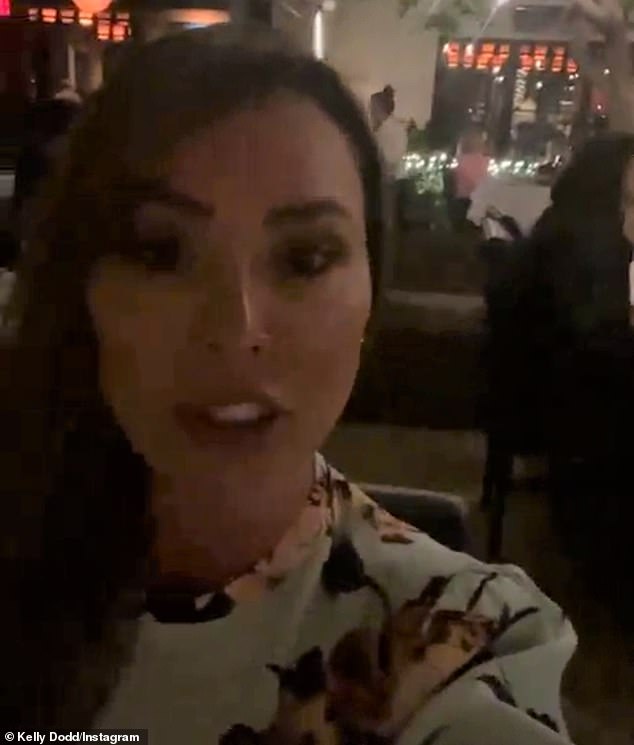 Why: The feuding reality stars came to blows earlier this year, when Kelly, 46, claimed she and husband Rick had contracted COVID-19 from Heather’s 16-year-old son Nicholas, 16 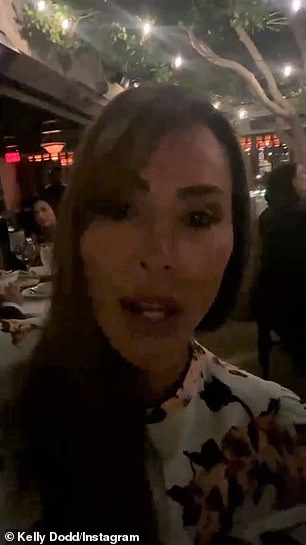 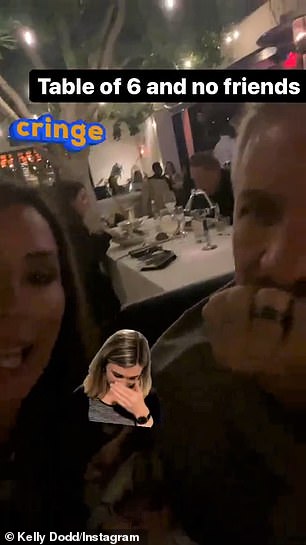 Yikes: Kelly launched a foul-mouthed attack on Heather and Terry Dubrow on Wednesday evening, as they were eating dinner at a public restaurant 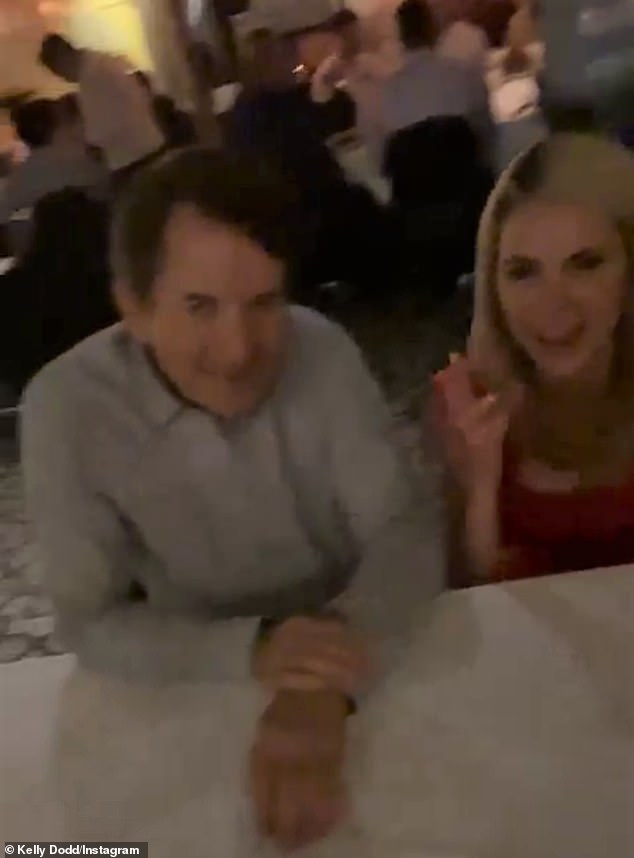 Giggling: Kelly asks her pals if she interrupt Heather and Terry’s dinner 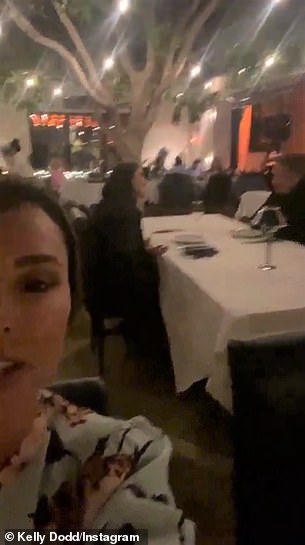 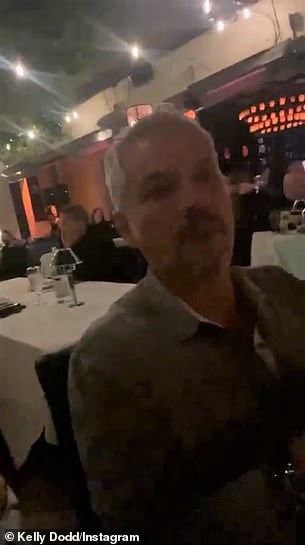 Did someone order beef? At one point, Kelly began to make fun of the couple for sitting at a large table, captioning the video: ‘Table of 6 and no friends

She went on to compare Heather to the cartoon character Coraline, and referred to Terry as ‘Gomer Pyle ‘ a character that is played by Jim Nabors from The Andy Griffith Show.

At one point, Kelly began to make fun of the couple for sitting at a large table, captioning the video: ‘Table of 6 and no friends.’

In July this year, Kelly posted video to Instagram in which she publicly apologized for claims she made against the Dubrow’s son Nicholas.

‘So I got this letter from an attorney for the Dubrow family reminding me I made a statement that may sound like truth, when in fact it was a joke and for that, I am offering my sincere apology,’ she explained explained. 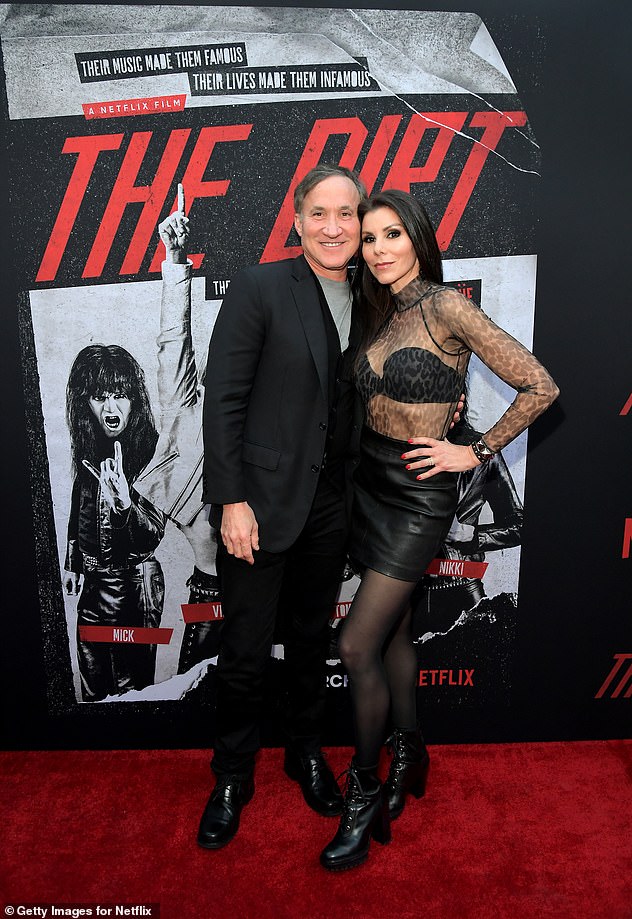 Not having it: Terry and Heather Dubrow (pictured in 2019) allegedly sent a cease-and-desist letter to Kelly Dodd

Kelly and Rick, who married in October 2020, got the coronavirus in January after ringing in the New Year in Aspen, Colorado.

Holding up the legal letter she had received , the reality star shared: ‘I did get COVID at a party New Year’s Eve, and Heather Dubrow’s son and his friends were all there.

‘And while I had information leading us all to believe we could’ve gotten COVID from them, because we all, like 24 of us, got COVID that night, we obviously have no way of proving or knowing for sure he or his friends were the source of our infection.’

Kelly added: ‘And for that, I apologize. I’m going on the record right now to be very clear, Rick and I don’t know how we caught the virus, and we’re both very very sorry for any trouble we caused the Dubrow family.’ 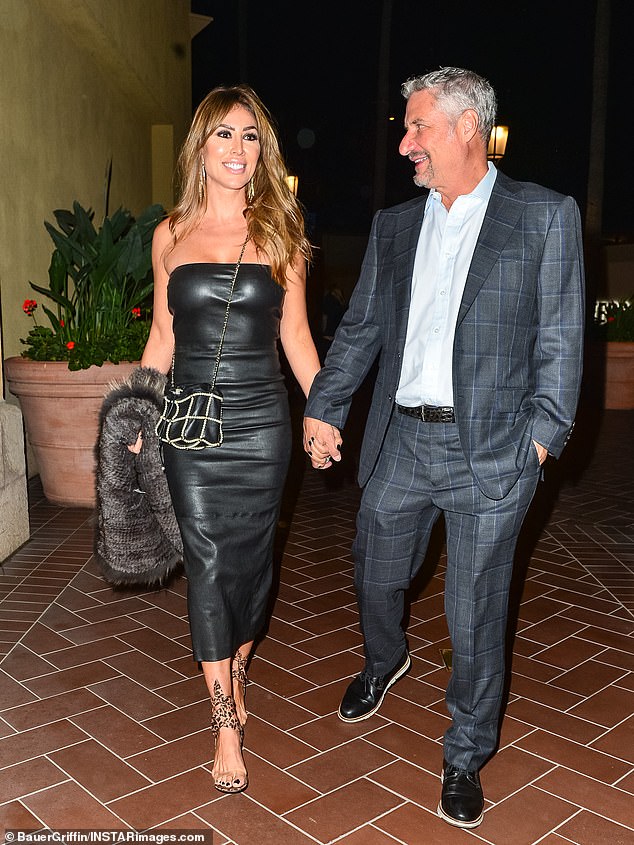 Controversial couple: Kelly and Rick are pictured together last month

Dodd had faced intense backlash last year for her controversial COVID-19 opinions and later toasted to being a ‘super-spreader’ while at a bar with friends amid strict lockdown and social distancing measures in California.

And on June 16, Variety confirmed that Kelly, along with Braunwyn Windham-Burke and Elizabeth Lyn Vargas, would not be appearing in season 16 of The Real Housewives of Orange County.

At the time, Kelly tweeted: ‘The last five years have been an amazing experience. The next five years will be even better. I am so grateful for all the love and support and so excited about the future.’

Ironically, Dubrow was invited back to the Bravo reality show after taking four seasons off following season 11.

More recently both Kelly and her husband Rick landed themselves in hot water for their controversial Halloween costume.

Particularly Rick, who came dresses as Alec Baldwin on the set of Rust.

He would later delete the post ‘out of respect’ to cinematographer Halyna Hutchins – who tragically lost her life after being accidentally shot by Baldwin. 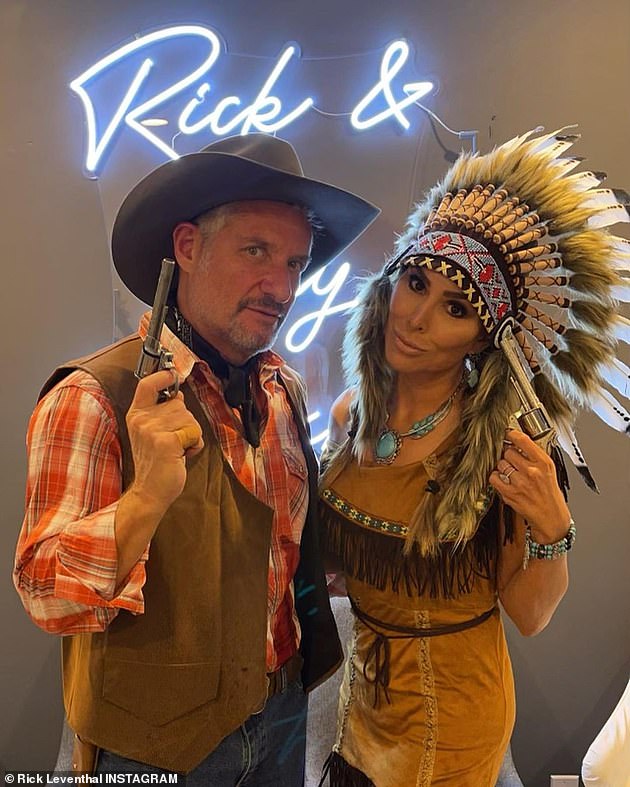 Tasteless: Leventhal came under fire for photos he shared of his Halloween costume this week dressed as Alec Baldwin on the set of Rust, seemingly making light of the fatal shooting of Halyna Hutchins by Baldwin last month.