RIATH AL-SAMARRAI: Please, Johnson and Co, just admit it’s all about the money

There was something appropriate about it falling on George W Bush’s former press secretary to throw out the first question to golf’s rebel front in St Albans yesterday.

For who better than Ari Fleischer, one of the prime cheerleaders of the war in Iraq, and now an emcee for the Saudi-backed LIV tour, to hold a discussion with men attached to dubious causes? And what an opener he delivered on the grounds of the sedate Centurion Club in Hertfordshire.

What was it, he asked of Dustin Johnson, Graeme McDowell, Louis Oosthuizen and the 15-year-old Ratchanon Chantananuwat, that had attracted them to LIV? It didn’t take a giant leap to get from there to that old Mrs Merton classic to Debbie McGee: ‘So what first attracted you to the millionaire Paul Daniels?’

We heard a few benign answers: Johnson is ‘excited’, and particularly by the three-day format and the absence of a halfway cut; Oosthuizen just wanted something different; McDowell spoke initially about golf borrowing from the success of cricket’s Twenty20; Chantananuwat was simply happy to be there. And of course none of them got into the weeds of the why until the microphone reached the wider gallery of media, when a deeper probing was directed at golfers who have taken the loot.

Sacks of it, upwards of £100million in appearance money in the case of Johnson, whose earnings on the PGA Tour had reached £60m before he announced yesterday that he was done with that work.

He, along with Phil Mickelson, is the interesting figure in this grubby business. He had said 107 days earlier that he was ‘fully committed’ to golf as we know it, which is to say golf on the PGA Tour. So, the question went, what changed?

‘At that time I was committed to playing the PGA Tour,’ he said. ‘I’m very thankful for everything it’s done for me. This is something I thought was best for me and my family. I think it’s great for the game of golf. That’s why I’m here.’ 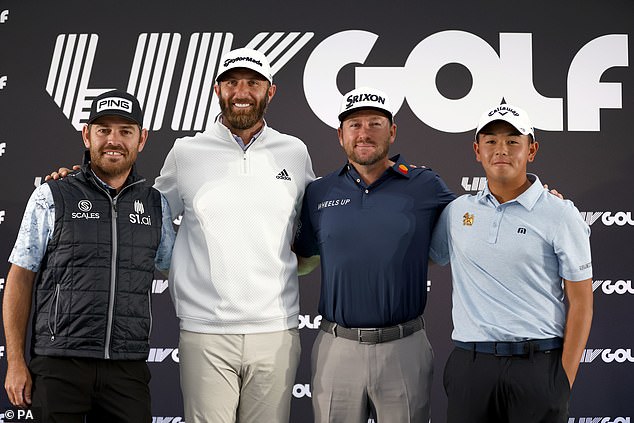 Great for the game of golf? We’ll come back to that one in time, and what this tawdry breakaway will eventually mean for the defectors and the (flawed) establishments left behind; about the aftershocks of wrestling back personal control from the traditional tours, as the wanderers would argue. But first it is necessary to look at the gilded wagons to which these sportsmen have hitched themselves.

Without them, this week’s inaugural LIV gig at Centurion would have been the dampest squib in sport; a civil war launched on unknowns and a few ageing heroes like Lee Westwood, Ian Poulter Sergio Garcia and McDowell.

But if Mickelson gave this 48-player, eight-stop breakaway a bigger name and its most controversial soundbites — he called the Saudis ‘scary mother*******’, as you’ll probably remember — then it is Johnson who provides the here-and-now quality. On his day, he is arguably the finest golfer in the world and now he has repurposed himself as a sponge for a regime wanting to wash its reputation. As if a sponge could ever beat a bonesaw.

His take, that he is doing what is best for his family, is workable with certain contortions, because accepting a massive pay rise will strike many as a relatable decision, even if we would likely prefer, from less invested distances, for those who are already fabulously wealthy to take a moral high ground. There is also the retort that if governments, including the British, can take Saudi money, then why not? 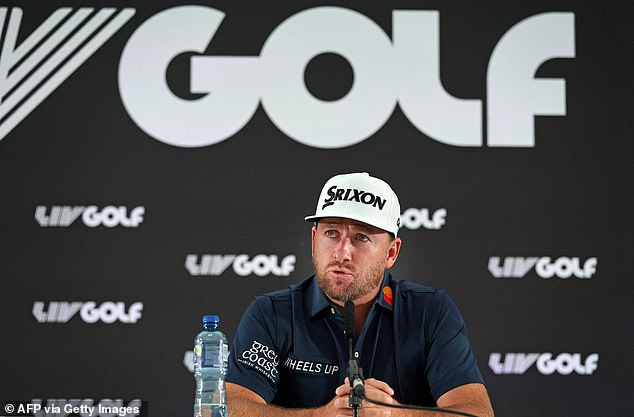 But where these ever-prevalent narratives tend to get particularly uncomfortable concerns how you treat the hand that feeds you — not biting it shouldn’t necessarily mean giving it a kiss. That takes us back to the commonly adopted theory, as used by McDowell yesterday, that a greater good might be achieved by such ventures.

It somewhat ran the risk of over-stating golf’s importance in a country where the crown prince is accused of authorising the appalling murder of Jamal Khashoggi. The societal good of a decent wedge game? Try that one in Deera Square in Riyadh at noon on a Friday, when heads are cut from necks.

That’s where McDowell fell from the tightrope, when he followed his honesty in saying ‘we’re running a business here’, with the sort of line that has been a sinker for many in his position, from Anthony Joshua to Formula One to Newcastle United. ‘If Saudi Arabia want to use golf as a way to get to where they want to be, I think we are proud to help them on that journey.’

It was like a putt that rolled past the hole and all the way off the green. Johnson nodded along as it went, before saying: ‘Exactly what Graeme said.’

Maybe his play off the tee will be more inspiring. 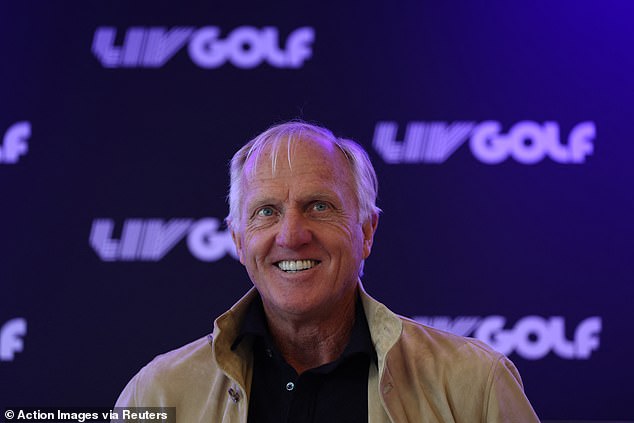