Sporting a cut to his head and wearing bright red runners, Ricardo Barbaro has been led away in handcuffs ahead of a return to Melbourne to face charges of murdering his girlfriend.

The 33-year-old mafia enforcer is accused of killing his Ellie Price sometime between April 29 and May 4 in the South Melbourne unit they shared, before fleeing the city.

Barbaro spent 10 days on the run until NSW Police nabbed him at Wentworth Point, in Sydney’s west, in the early hours of Thursday morning.

Calabrian mafia-linked Barbaro was moved from the cells at Burwood Local Court on Thursday afternoon, before being taken to a nearby jail ahead of the long drive back home alongside Victoria Police on Friday.

During a brief court hearing at Parramatta on Thursday morning, Barbaro had Gold Coast solicitor Campbell MacCallum in his corner, representing him over the phone.

Mr MacCallum, a gym junkie, is well known on the sunshine strip for his flashy jewelry, ‘gangsta chic’ office and sometimes even wearing a purple suit to court.

Ricardo Barbaro (pictured) is led from the cells at Burwood Local Court on Thursday afternoon. He will be taken to a nearby jail to spend the night, before returning to Melbourne on Friday 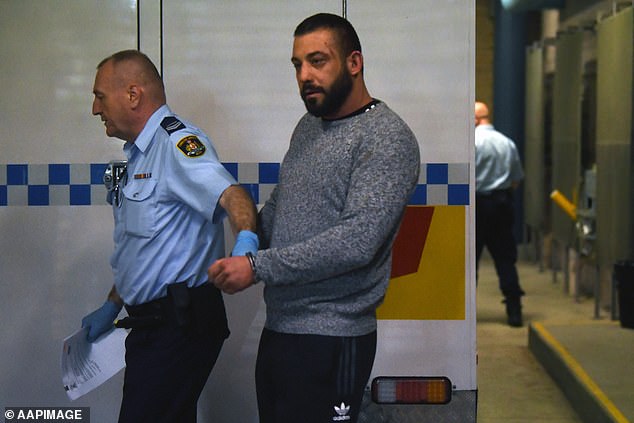 Barbaro was sporting a cut to his head, after allegedly resisting arrest when NSW Police came knocking 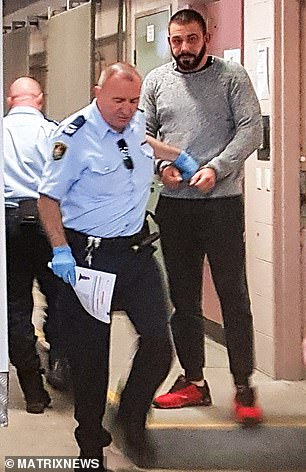 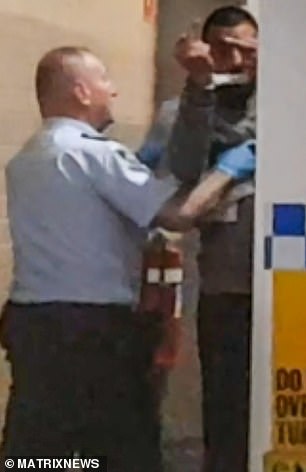 Sporting a cut to his head and wearing bright red runners, Barbaro was led away in handcuffs ahead of a return to Melbourne to face charges of murdering his girlfriend 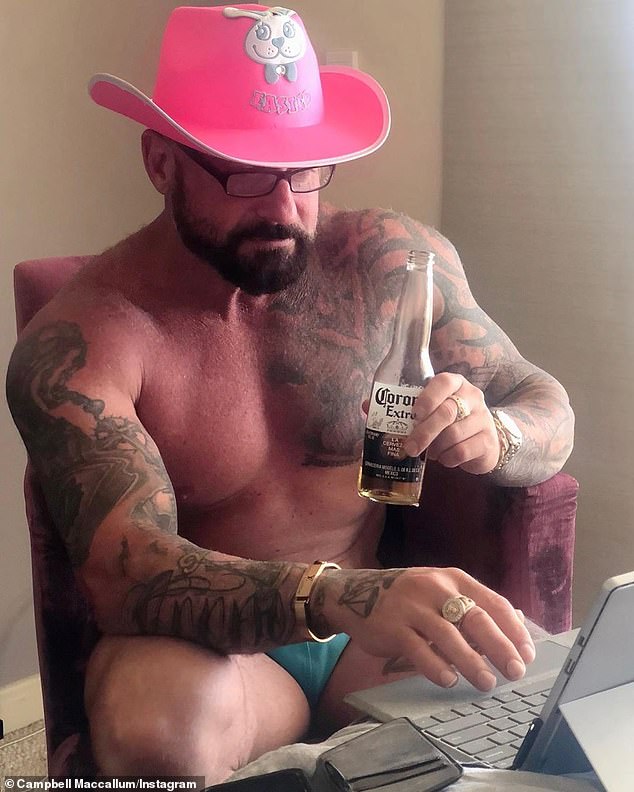 The colourful legal heavyweight is himself draped in tattoos and known for his ‘gangsta’ fashion sense, and the high-profile names he regularly represents.

MacCallum told Daily Mail Australia he has only had the opportunity to speak with Barbaro on the phone and is yet to see the specifics of the police allegations.

After a ten day manhunt, Barbaro was found at a woman’s Wentworth Park unit just after midnight on Thursday.

He allegedly attempted to resist arrest and was injured in the process, with a gash to the right hand side of his visible in photos of him being led out of the Burwood cells.

Mr MacCallum confirmed Barbaro, who will face court on a murder charge on May 16, suffered ‘lacerations and some bruising’ in a standoff with officers last night.

The maverick lawyer has called several footballers past and present among his clients, including Ben Barba.

Mr MacCallum has long represented members of the Barbaro clan – including Ricardo’s brothers Harley and Rossario – through his firm, Moloney MacCallum Abdulshaheid (MMA).

The lawyer said police have sometimes used the family’s name to taunt members of the clan.

Ricardo’s brother, Pasquale, was infamously gunned down in a gangland hit in 2017. Some of his relatives have historic ties with the Calabrian mafia.

‘It’s no secret that they can’t be considered angels, especially in my experience recently with young Harley Barbaro – who is a great young kid,’ Mr MacCallum said.

‘He has constant harassment and attention by police for the smallest of matters and whilst they are executing warrants on his house they often make remarks.’ 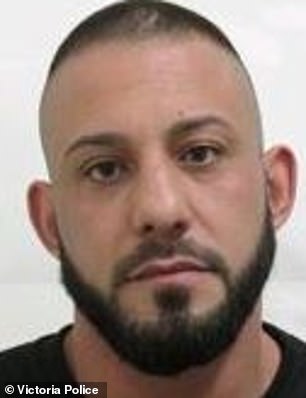 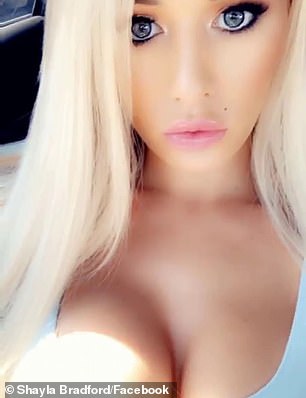 Extradited: Ricardo Barbaro (left) will face court in Melbourne on Saturday and will be charged with the murder of his girlfriend Ellie Price (right) 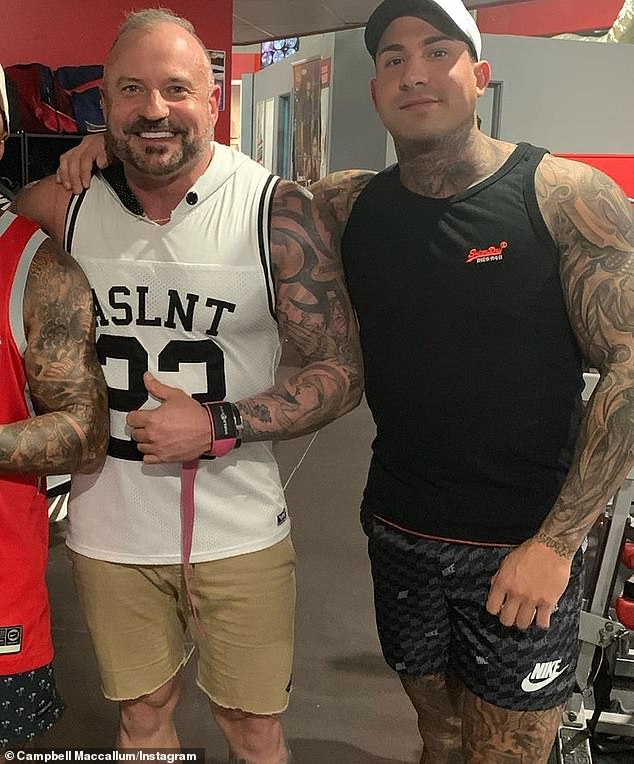 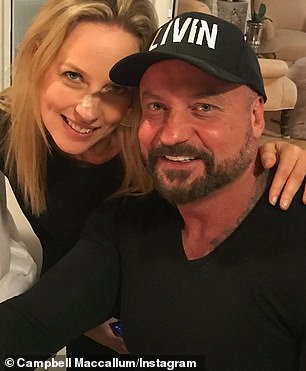 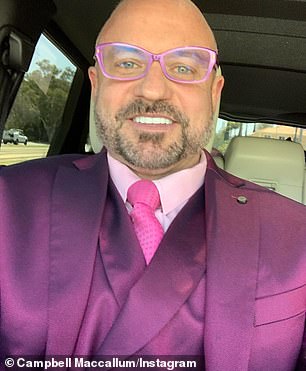 MacCallum (left, with his sister) comes from a family of lawyers and is well known on the Gold Coast for sometimes rocking up to court in a purple suit (on right)

Harley has previously been accused of being a member of the Villains outdoor motorcycle club.

Mr MacCallum said he had been fascinated by crime since he was very young and becoming a defence lawyer was a way of stimulating his interest.

He has become known on the Gold Coast for his ‘gangster chic’ office with Versace rugs and 2Pac and Scarface posters on the wall. 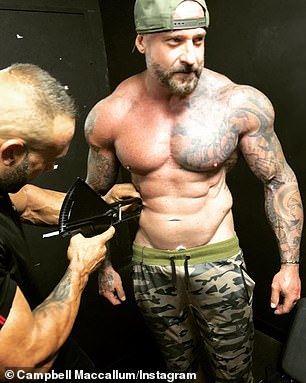 ‘I deck my office out how ever I want to without any regard to anyone else’s opinion, he said.

Mr MacCallum said his clients can ‘relate’ to his interests, which include gangster rap music, but know he is a professional person.

Only occasionally has his fashion sense made things complicated at court  – such as when large diamond earrings he used to wear upset a magistrate.

‘I’ve never wanted to conform to how people should or shouldn’t look, he said. ‘I just want to do my own thing’.

HOW FUGITIVE RICARDO BARBARO WAS CAPTURED

The arrest of fugitive Ricardo Barbaro came after a tense stand off with police in Sydney, as he refused to leave the apartment of a glamorous woman.

Barbaro, 33, was arrested about 12.15am on Thursday after a 10-day manhunt by national police over the death of his girlfriend Ellie Price in a Melbourne unit. He will be extradited to Victoria.

Court documents said police plan to charge Barbaro with the offence of murdering Ms Price between April 29 and May 4.

Detectives last week appealed to the public for information on the whereabouts of Barbaro, and called for him to come forward.

Police finally closed in on Australia’s most wanted man last night after a tip off.

He was found at a unit belonging to a woman at Wentworth Park in Sydney’s inner west.