Richard Briers: A new book reveals the rakish rebel behind the middle-class image

For the 17 million fans who regularly tuned in to laugh at his efforts at self-sufficiency in suburban Surbiton, Richard Briers will forever be the amiable eccentric Tom Good of The Good Life.

The Seventies sitcom tapped into the liberal revolt against suburban living and successfully lampooned curtain-twitching sensibilities, making household names of its cast in the process. Who can forget Felicity Kendal as Tom’s sexily cheerful wife Barbara or their neighbours – snobbish Margo (Penelope Keith) and her hen-pecked husband Jerry (Paul Eddington)?

Yet for the all the success it brought him, Richard Briers, who died in 2013, wasn’t a fan of his most famous creation. ‘I never really liked Tom. I thought he was selfish and obsessed,’ he admitted. ‘Poor Barbara never got any dresses and presents. It was always about him, his ideas, his plans.’

Richard and Felicity Kendal. Briers will forever be the amiable eccentric Tom Good of The Good Life

Given what he described as a ‘hate-hate relationship’ with Tom, it might seem strange that Briers was himself the model for the character. ‘With Tom, who I actually thought was quite conceited, there wasn’t really a great deal to latch on to – unlike Jerry, and especially Margo, who was a marvellous character,’ he once explained. ‘So until we started making the show, and the characters began to mature, I based him on myself.’

Indeed, The Good Life was initially conceived as a comedy vehicle for Briers. The BBC’s new Head of Comedy, Jimmy Gilbert, thought him ‘one of the best comedy actors we had’ and asked John Esmonde and Bob Larbey, the writers of the successful sitcom Please Sir!, to find a suitable project.

Their first idea – a middle-aged character who packed in his job, built a yacht and sailed around the world – was abandoned because the budgets were too small. Self-sufficiency was a cheaper, and more topical, replacement.

‘We thought we would have him buy an acre in the country,’ said Larbey. ‘But eventually decided that it would be a hell of a lot funnier if he did it in suburbia.’

The Leadbetters next door, of course, provided the deliciously comic tension.

‘We needed a reason why the neighbours would be disapproving,’ continued Esmonde ‘and what better reason than snobbery? But rather than giving them lines like, “I hate the smell of this mess,” we felt, “This is Surbiton, and we don’t want that kind of thing here,” was much stronger.’

The producers were still having trouble finding the show’s other stars when Briers took his wife Ann to see the Alan Ayckbourn trilogy The Norman Conquests in the West End with Felicity Kendal. She remembers a knock on her dressing-room door one night. ‘I’d never met Richard before. After saying some very nice things about the play, he asked me if he could send me a script for a new sitcom. “You’d be playing my wife, I’m afraid,” he said, smiling. “It’s a rather dotty little role, and it probably won’t be a big series.”

‘I read the script but I was already in,’ reflected Kendal. ‘I’d been waiting years for something like this to happen.’

The team also cast Penelope Keith, who writers Esmonde and Larbey had spotted in a cigarette commercial – and an unknown stage actor, Paul Eddington, was picked as Jerry.

The first episode aired on Friday April 4, 1975, and the viewing figures were disastrous. The audience was a mere 5.5 million at a time when top-ranking shows could get 18 million viewers, more than twice the audience of modern hits such as Strictly Come Dancing.

Briers later reflected that watching a television series fail is like a slow death. ‘With a play you can take it off, but with a television series you’ve got to see it through to the bitter end. I confess I thought I might have made a terrible mistake.’ But the viewing figures did rise to 8.2 million, enough to persuade Gilbert to commission a second series. ‘And in the middle of the second series there was a stroke of good fortune as a strike at ITV shoved The Good Life to the No 1 spot instantaneously – and it remained there,’ says producer John Howard Davies.

One of the reasons Briers so disliked the self-indulgence of Tom Good may have been because his own upbringing was far from comfortable. Indeed, he was in many ways a paradoxical character: a school dropout who came to embody the educated, suburban middle class; a gregarious friend to theatrical knights and dames who was just as happy chatting to the men at the rubbish tip; and a TV sitcom star who rubbed shoulders with the finest stage actors of his time and was ultimately recognised as their peer. ‘The public are always quite shocked when I tell them that my parents didn’t have two pennies to rub together,’ Briers said. ‘Or that I was rubbish at school. That really surprises them. They all think I went to Cambridge or somewhere and have lots of O-levels. O-levels? I didn’t even get a Z-level.’

Briers’ mother had been a pianist and frustrated actress, while his father wasn’t the most reliable breadwinner.

‘He was a good sort, but his attitude was “live for today”,’ said Briers. ‘He was a bookmaker most of his life but he never saved. He wanted to be popular in the pub, which he was. He was a rolling stone who liked life to be pleasant, but money was always short.’

Briers always credited his work ethic to his poor upbringing – and a young career as a wheeler and dealer started at the age of ten when he discovered he could sell sweets to his fellow pupils before going on to peddle comics, cigarettes and even alcohol.

His desire to remain solvent persisted and merely strengthened as time went on. ‘It’s fair to say it became an obsession with him,’ says Ann, Briers’ widow. ‘Ever since we met he was terrified about not having money in the bank and his work ethic reflected that.’

His family noticed that the young Richard loved to entertain, but it was the rakish actor and entertainer Terry-Thomas – his father’s cousin – who nudged the young man towards drama school and a career on the stage. He always said his audition for Rada ‘bloody well terrified me’ and claimed to have scraped in after achieving 62 per cent, barely above the pass mark of 60. Albert Finney and Peter O’Toole, who auditioned on the same day, got 89 per cent and 91 per cent respectively.

‘Finney, O’Toole and Alan Bates, who was also in my class, were the new wave and they got the leading roles,’ he recalled. ‘I was the slightly prissy boy from Wimbledon, destined to play the silly ass walking in and out of French windows carrying a tennis racket and saying, “I’m terribly sorry I’m late!”’

Yet Briers was nothing like the meek middle-class man most people assumed. In fact, he was a keen smoker, drinker and swearer who loved rugged language. And after narrating 25 episodes of Noddy for ITV in the Seventies, he finished by improvising an adult version, ‘Blue Noddy’. ‘It was so rude!’ says his daughter Kate. Dad tried repeating it one evening after he’d had a couple of drinks. I couldn’t believe my ears. Enid Blyton would have been spinning in her grave.’ 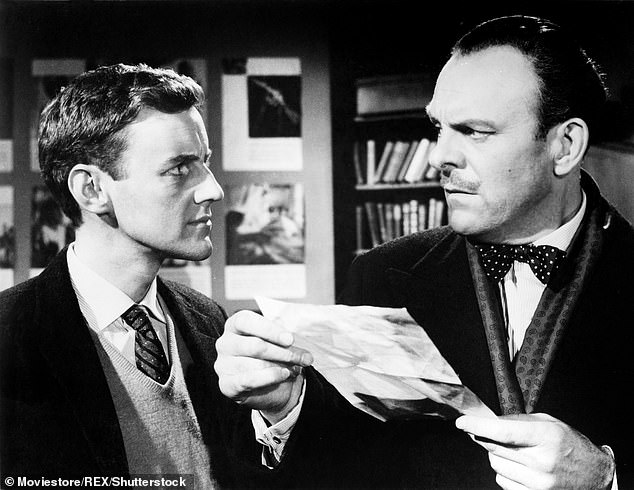 Briers with Terry-Thomas, his second cousin, in the 1962 film A Matter Of Who

It took until the late Eighties for Briers’ second major breakthrough, when a fast-rising Kenneth Branagh, then only 26, saw Briers on stage and offered him the first in a long sequence of Shakespearean and film roles.

Branagh’s 1992 adaptation of Much Ado About Nothing threw Briers into a cast of A-listers including Michael Keaton and Keanu Reeves. Branagh remembers Keaton being amazed at Briers’ comic timing and telling him: ‘He’s been funny in our country for about the past 30 years, you know.’

Briers struggled with nerves throughout his career. As a student he played the Dane ‘like a demented typewriter’, in the words of one critic. When he later played King Lear, Branagh remembered him shaking uncontrollably before he took the stage.

Though he gave up smoking in 2001 after consuming what he estimated to have been more than half a million cigarettes, Briers was diagnosed with emphysema in 2007 and refused all treatment. ‘Dad had no interest in doing anything that would help him,’ says Lucy. ‘There was this sense that he’d brought it on himself and didn’t deserve treatment. I remember him saying to Mum one day that he’d ruined his life. It was incredibly sad.’