Prince Harry and Meghan Markle are being ‘portrayed as victims’ and ‘are clearly targeting the Prince and Princess of Wales’ in their Netflix docuseries, The Mail’s Richard Eden has said.

Speaking to Mail+, the expert said the second trailer for the six-part documentary, which was released today, is ‘a declaration of war against the Royal Family’.

In the new one-minute preview, the Duke and Duchess of Sussex lash out at the ‘hierarchy of the family’, claim insiders ‘leaked and planted’ stories about them and describe royal life as a ‘dirty game’.

Then – after footage of Princess Diana and Kate being hounded by photographers – talk about ‘the pain and suffering of women marrying into this institution’.

Commenting on the trailer, Eden says: ‘What we are seeing is clear attempts to portray [Harry and Meghan] as victims, make sure that Meghan’s the new Diana figure.

‘They are clearly targeting Prince William and Catherine with this talk about the hierarchy,’ he adds.

The expert says: ‘Let’s be clear. This is a declaration of war against the Royal family. They even use the word war in this trailer.

‘You’ve got their high powered lawyer Jenny Afia from Schillings, who uses this word war, and it’s clear that that’s what they’re aiming for,’ he notes. 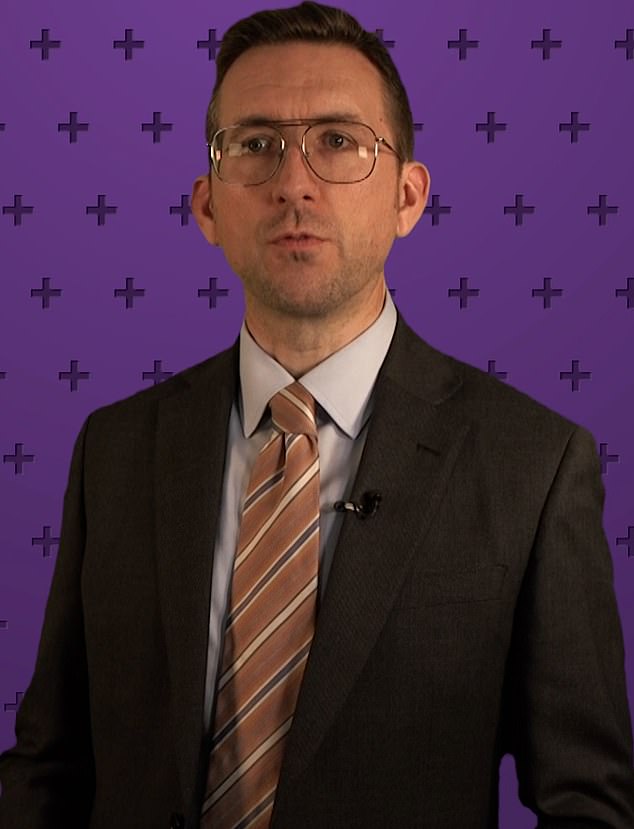 Speaking to Mail+, the royal expert (pictured) said ‘if you thought the last trailer was bad, just wait till you’ve seen this one’

The second clip showed the couple’s lawyer alongside a myriad of images including some of Princess Diana.

Eden says: ‘If you thought that first trailer was bad, wait till you’ve seen this one.’

He went on to explain that friends of Prince William and Kate’s have told him that they were ‘sickened’ by the first trailer.

He says: ‘It seems to me that this trailer is relating to the first three episodes, which are going to be streamed this Thursday, and I sense that they are holding back a lot for the next three the following week. I dread to think what’s in those.’ 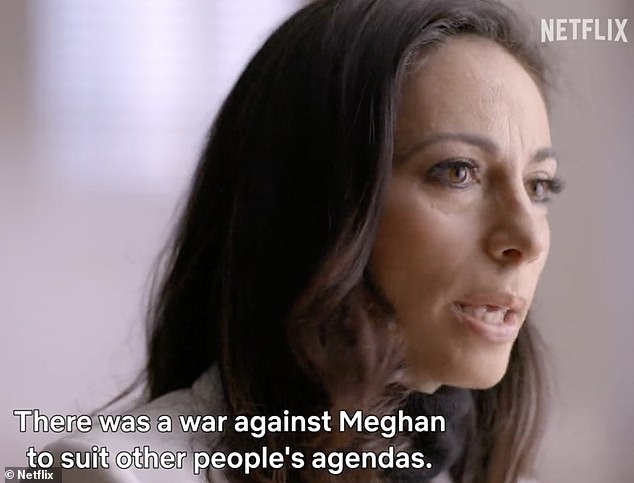 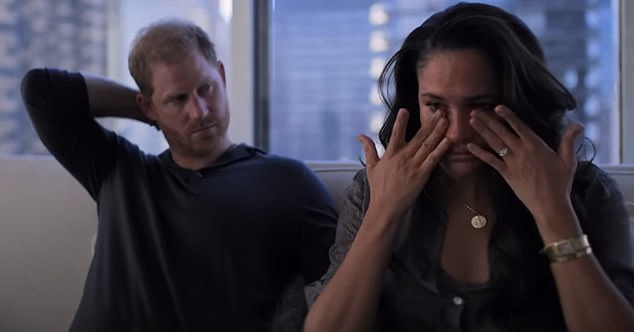 Eden went on to say that Harry and Meghan, who are based in Montecito, California, have to ‘concede that they got really generous favourable coverage’ over their wedding and before.

In this trailer, the couple reference this positive coverage and even have Piers Morgan’s comment on the voice over welcoming Meghan into the Royal family.

However, Eden shares his shock that after this they jump straight into mentioning the hierarchy of the Royal Family.

He notes: ‘They are referring to Prince William being the heir to the throne and above Prince Harry in the line of succession. They are clearly targeting Prince William and Catherine with this talk about the hierarchy.’ 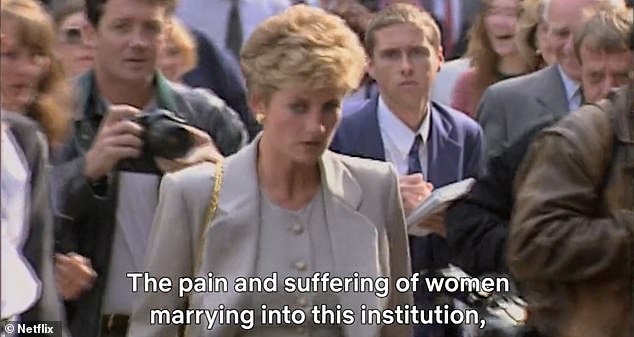 Eden said: ‘What we are seeing is clear attempts to portray them as victims, make sure that Meghan’s the new Diana figure.’ Pictured, a clip of Diana which features in the trailer

Finally, Eden touches upon Harry and Meghan’s mention of the media and their claims that stories were leaked against them.

By Lydia Hawken for MailOnline

Prince Harry has blasted the ‘pain and suffering of women marrying into the institution’ in the latest trailer for his new Netflix series.

This afternoon, the streaming platform released a second trailer for the Duke and Duchess of Sussex’s new series and confirmed the first episodes of the television special will debut on Thursday.

In a clip from the series, the father-of-two discusses how life within the firm can be a ‘dirty game’.

As Prince Harry muses on his experience as a senior working royal, the trailer jumps to an undated clip of Princess Diana at a royal engagement where she faces the world’s press. 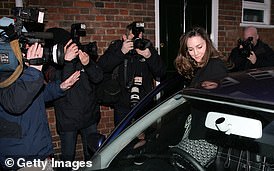 As the video flashes up on screen, Harry comments: ‘The pain and suffering of women marrying into this institution, this feeding frenzy. No one knows the full truth. We know the full truth.’

Producers then used a split-second clip of the Princess of Wales outside her flat in Chelsea in 2007.

The future royal – who was working as an accessories buyer at fashion brand Jigsaw at the time – is seen walking along the street outside her home while being surrounded by photographers.

The then 25-year-old had been in a relationship with Prince William for seven years at the time the video footage was taken.

They made similar claims during their bombshell interview with Oprah Winfrey in 2021.

Eden however says that this is ‘just simply not true,’ and describes why he can say this with confidence.

‘How do I know that the stories weren’t leaked against them?,’ he says. ‘Because I was the first one that broke a negative story about Harry and Meghan, which was the departure of Meghan’s assistant, Melissa who had been so key in helping to organise the wedding.’

He ends referencing the British public’s opinion: ‘What we are seeing is clear attempts to portray them as victims, make sure that Meghan’s the new Diana figure.

‘Will the viewers fall for this? I’m not so sure. Perhaps round the world. But I think in Britain people know the true story.’

Today the streaming giant confirmed volume one will launch on December 8 – exactly three months after the death of Harry’s grandmother Queen Elizabeth II – while the second volume will be released on December 15 – clashing with the Princess of Wales’ carol service.

The teaser opens with a scene of Harry and Meghan in a car, seemingly in America, as the duke says: ‘It’s really hard to look back on it now and go ”what on earth happened?”

As videos play of the couple announcing their engagement and their wedding in 2018, a news clip voiceover by Piers Morgan says: ‘She’s becoming a royal rock star’.

Another scene plays of the Sussexes on a royal walkabout as a member of the public shouts ‘Meghan, we love you!’

It cuts to Meghan saying ‘and then’ before snapping her fingers with Harry adding: ‘Everything changed’.

A photo of the Royal Family at the Trooping the Colour in 2019 is shown – including William, Catherine, Charles and Camilla – while Harry narrates: ‘There’s a hierarchy of the family, you know, there’s leaking, but there’s also planting of stories. It’s a dirty game.’

The couple’s lawyer, Jenny Afia, tells the camera: ‘There was a war against Meghan to support other people’s agendas’ before Christopher Bouzy, a tech entrepreneur and a longtime supporter of the couple, says, ‘it’s about hatred, it’s about race’.

Clips of paparazzi photographing the couple are then paralleled alongside old footage of Harry’s mother, Princess Diana, and Catherine, Princess of Wales, being followed by the media.

The duchess then says: ‘I realised they’re never going to protect you’ and Harry adds, ‘I was terrified, I didn’t want history to repeat itself.’

Finally, Harry appears in a selfie video as he says, ‘No one knows the full truth – we know the full truth’ and the trailer ends.