The 48-year-old journalist’s oldest son was diagnosed with Rett Syndrome, a genetic mutation that leads to severe cognitive deficits and physical impairment. The condition is rare, even more so in boys, and there is no cure.

Henry passed away on August 9, according to a memorial page on the Texas Children’s Hospital website. Engel shared the heartbreaking news in a joint statement with his wife, Mary Forrest, on Twitter Thursday.

‘Our beloved son Henry passed away. He had the softest blue eyes, an easy smile and a contagious giggle. We always surrounded him with love and he returned it, and so much more. Mary and Richard,’ he wrote.

Richard Engel, 48, announced that his six-year-old son Henry has died after a years-long battle with Rett Syndrome, an incurable neurological disorder 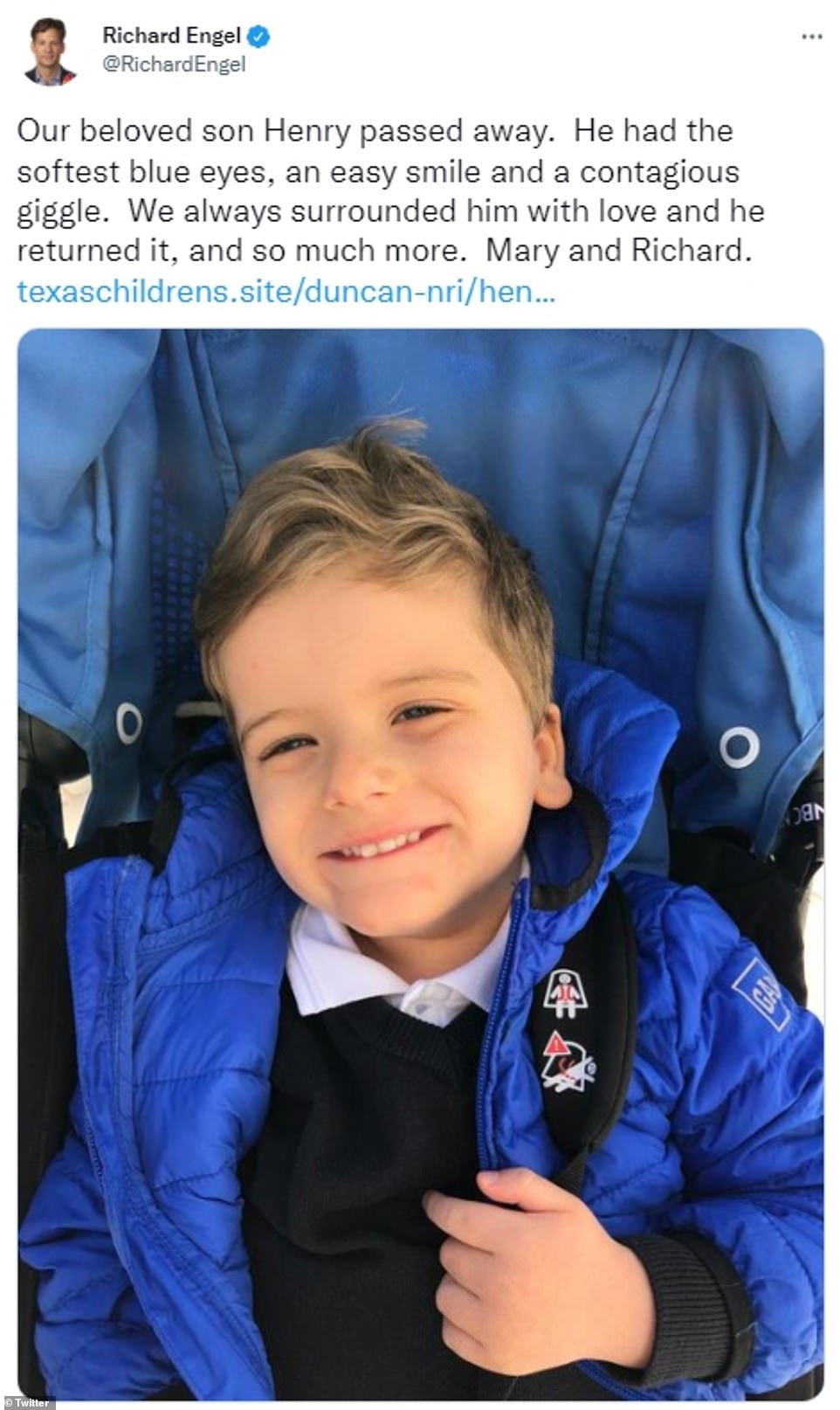 Engel shared the heartbreaking news in a joint statement with his wife, Mary Forrest, on Twitter Thursday 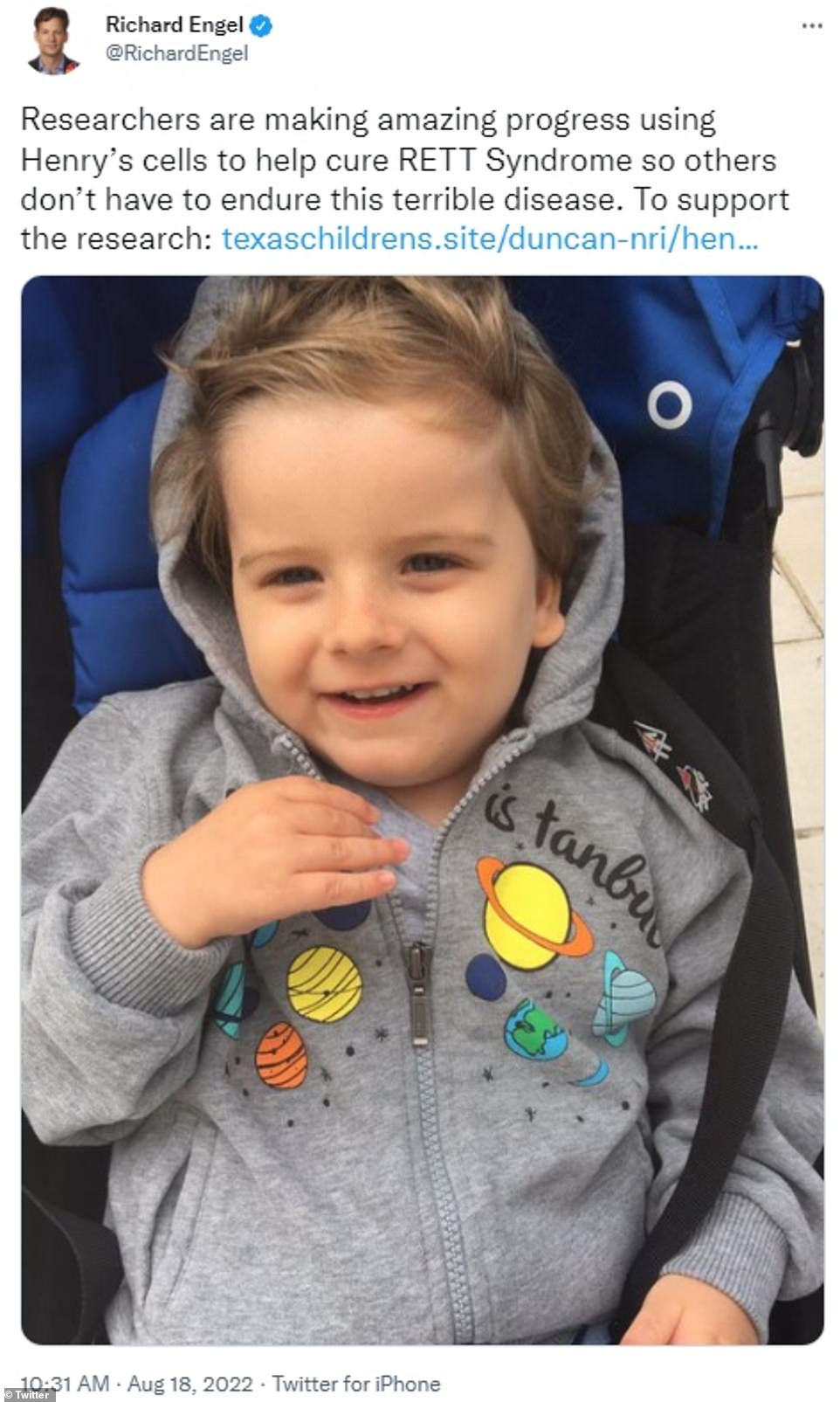 The couple, who also have a three-year-old son Theo, encouraged those who want to honor Henry’s memory to make a contribution to the Texas Children’s Hospital in support of its Rett Syndrome research.

‘Researchers are making amazing progress using Henry’s cells to help cure RETT Syndrome so others don’t have to endure this terrible disease,’ he added in a follow-up tweet, including a link to the donation page.

‘His condition progressed and he’s developed dystonia: uncontrolled shaking/ stiffness,’ he explained on Twitter. ‘He was in the hospital for 6 weeks, but is now home and getting love from brother Theo.’ 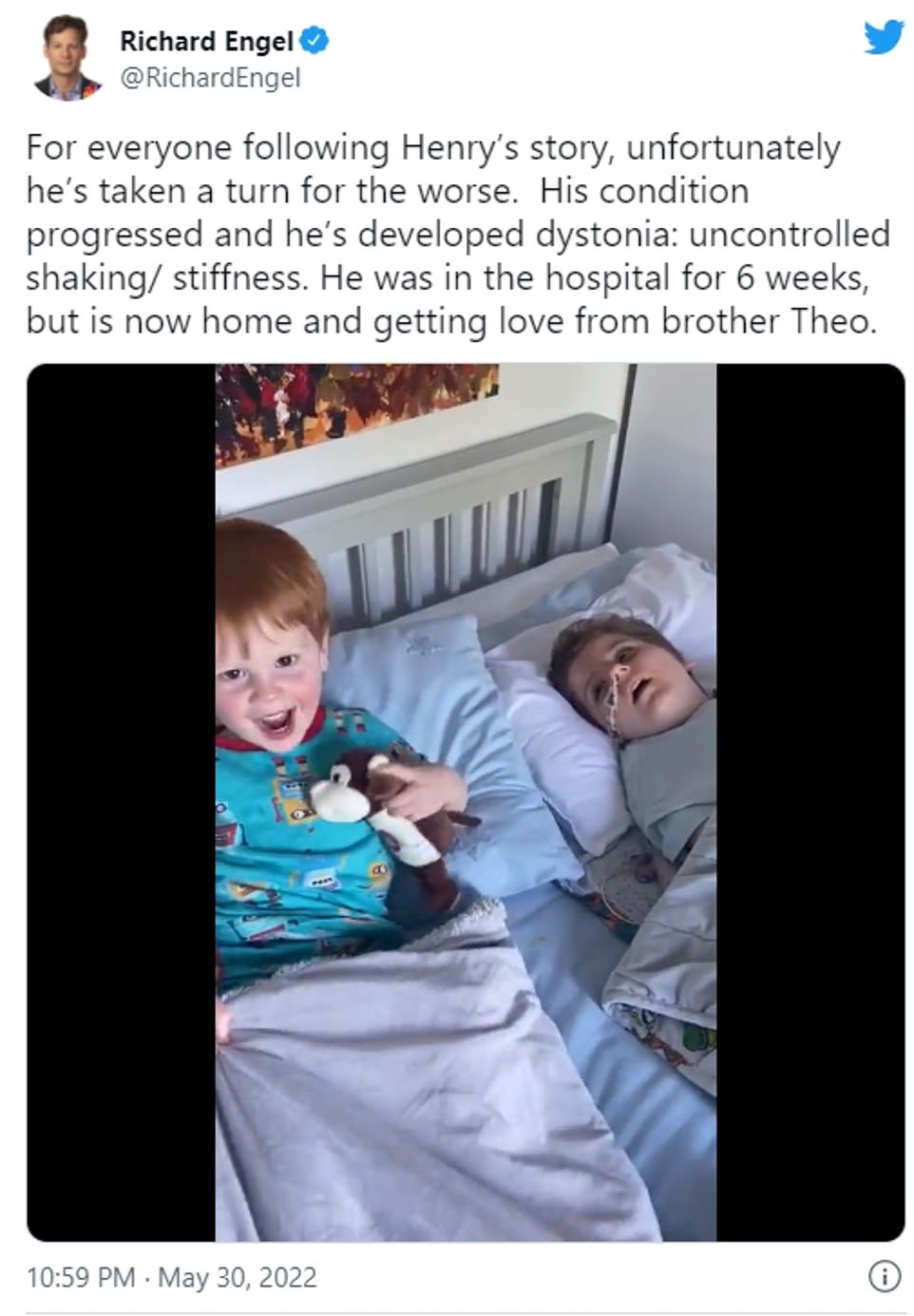 A few months ago, the NBC News chief foreign correspondent shared that his oldest son had developed dystonia, which is characterized by involuntary muscle contractions and stiffness 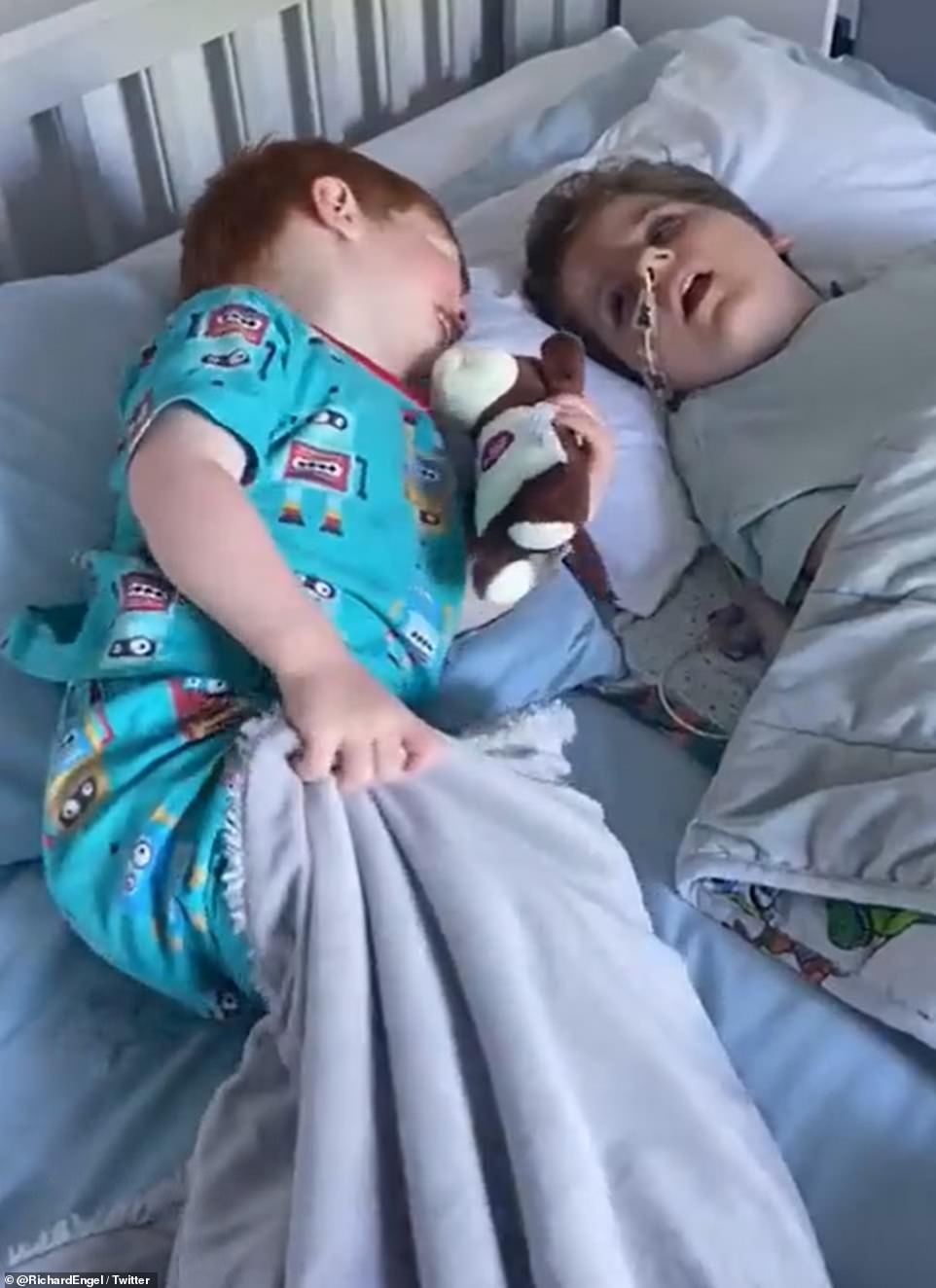 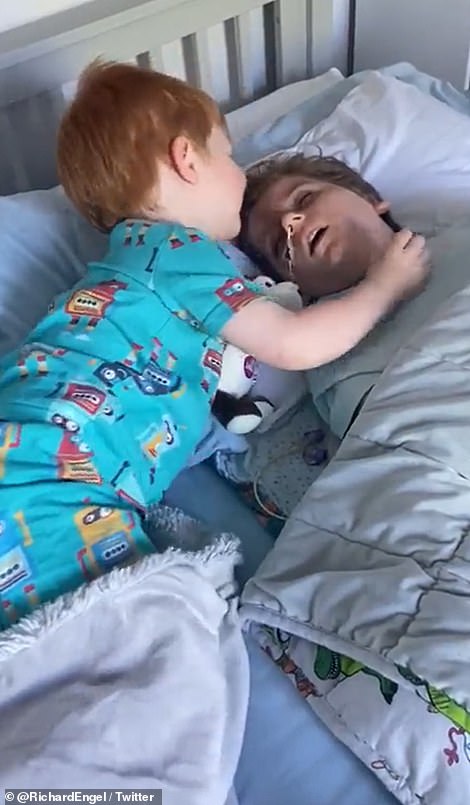 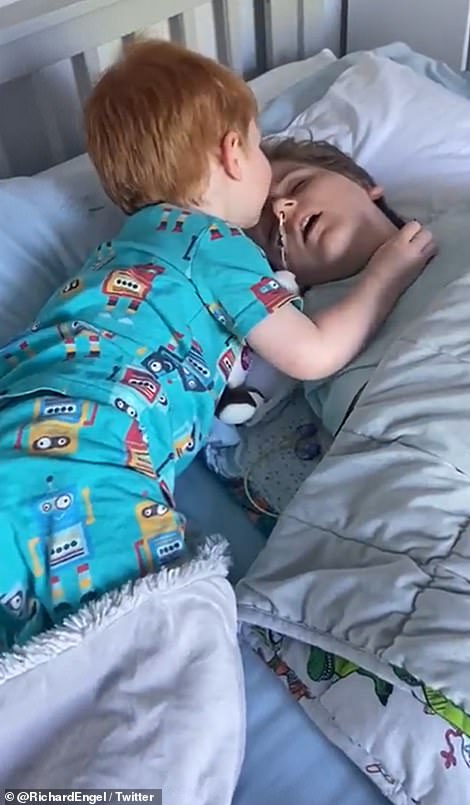 What is Rett Syndrome? The rare neurological disorder that leaves kids unable to speak, eat, walk, talk, and breathe

One child in 12,000 is born with Rett Syndrome, yet few people have heard of it.

The progression of the disease can be roughly divided into four stages.

During the first stage, from about the age of six to 18 months, a baby slows in development, loses interest in play, stops making eye contact, starts walking awkwardly, and makes repetitive hand movements.

The second stage, known as ‘rapid destruction,’ begins between the ages of one and four.

The child finds it increasingly difficult to communicate and learn, and there is often a deterioration in other brain functions.

The third stage, the ‘plateau,’ begins between age three and ten.

Limbs become floppy, epilepsy may develop and there may be weight loss and teeth-grinding.

However, many parents say children are less distressed and show more interest in their surroundings.

The final stage can last for decades. Usually severe bending of the spine — scoliosis — develops, as well as losing the ability to walk.

Almost all cases are caused by a mutation in the MECP2 gene that prevents nerve cells in the brain from working properly.

Currently, there is no cure and only the symptoms are treated. Sufferers can live to their 40s but most die before 25.

In the heartwarming clip, Thee gives his older brother Henry a sweet kiss on the forehead while he is lying down.

Shortly after sharing the update, Engel returned to Twitter to post a photo of Henry sitting up in a chair, writing, ‘Thank you everyone for all the kind messages, from Henry, our Mr. Handsome.’

Engel and Forrest have been candid about Henry’s medical journey following his diagnosis of Rett Syndrome in 2017.

The mutation stops the brain from growing properly, and according to WebMD, symptoms include slowed growth, issues with hand movements, a lack of language skills, problems with muscles and coordination, and trouble breathing.

So far, the treatments for the incurable condition are mostly limited to various forms of therapy, like physical therapy, speech therapy, and behavioral therapy.

‘It’s not just delay. It means lifelong, permanent, untreatable physical and intellectual impairment,” Engel said on the Today show in 2018. ‘Unfortunately, the more we learned about it, the worse the news got.’

Henry will likely never be able to walk, talk, dress himself, or have the mental capacity beyond a toddler. He was three and a half years old when he said ‘Dada’ for the first time, a milestone that Engel wrote about in an essay for Today.

‘To parents with typically developing children, a little Dada may not seem like a big deal,’ he explained.

‘But for me it was a validation, an acknowledgment that he’s in there, knows me, knows that his mother and I are forces for good in his life, and above all, that he loves us.’

Engel and Forrest welcomed their son Theo in 2019, and he admitted that it was difficult to know that their baby boy would soon pass Henry’s developmental milestones.

‘You hold a baby like Theo and he’s wriggling. His muscles are moving. When he is upset, he screams with his whole body and kicks his legs with power. It’s something we never saw with Henry,’ Engel told People in 2019.

Their oldest son had started having seizures that year, and they were trying to manage his compulsive repetitive motion, which had become more pronounced.

Engel and Forrest have to watch Henry constantly and stop him from putting his hands in his mouth and scratching his eyes because he can hurt himself.

‘We’re hoping, in a few years, we can start a treatment that is still being invented,’ he told People at the time.

‘The problem is, while we wait [for a treatment], things deteriorate,’ he added. ‘The body starts to go, the hips start to go … the spine hasn’t been an issue, but it could be. We’re in a race against the clock no matter how much physical therapy we do, and we do a ton.’ 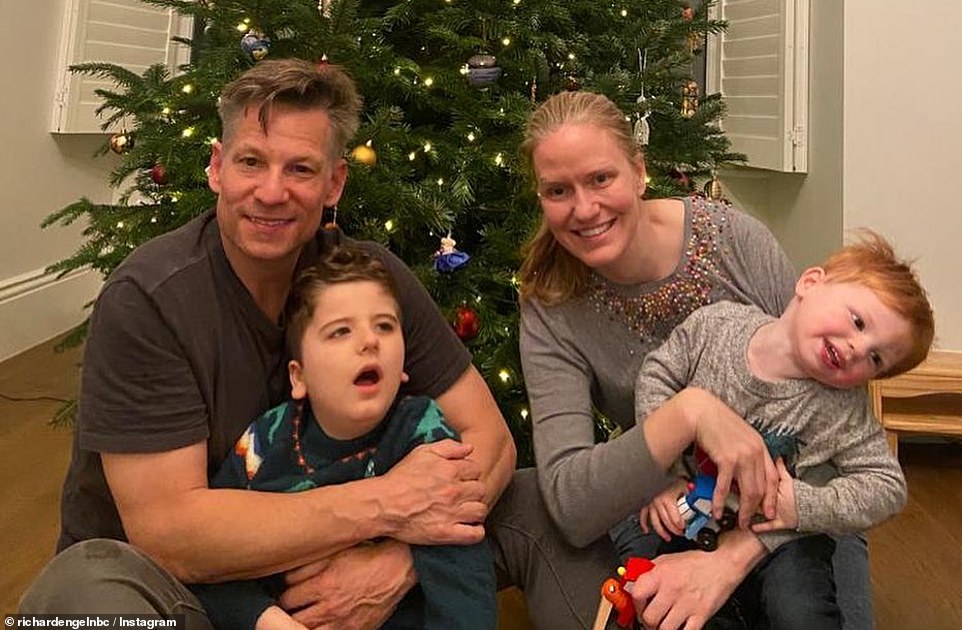 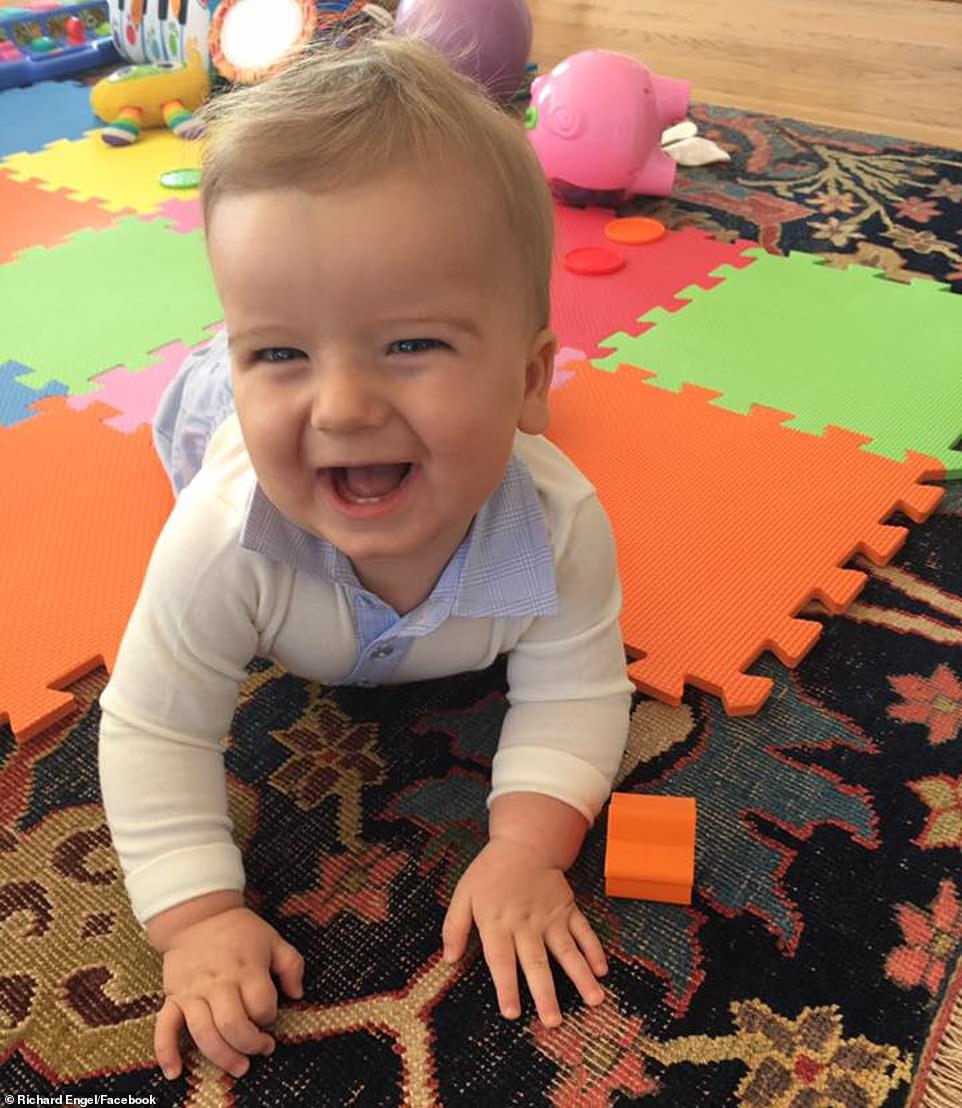 Henry, pictured as a baby, was diagnosed with Rett Syndrome in 2017. The genetic mutation leads to severe cognitive deficits and physical impairment 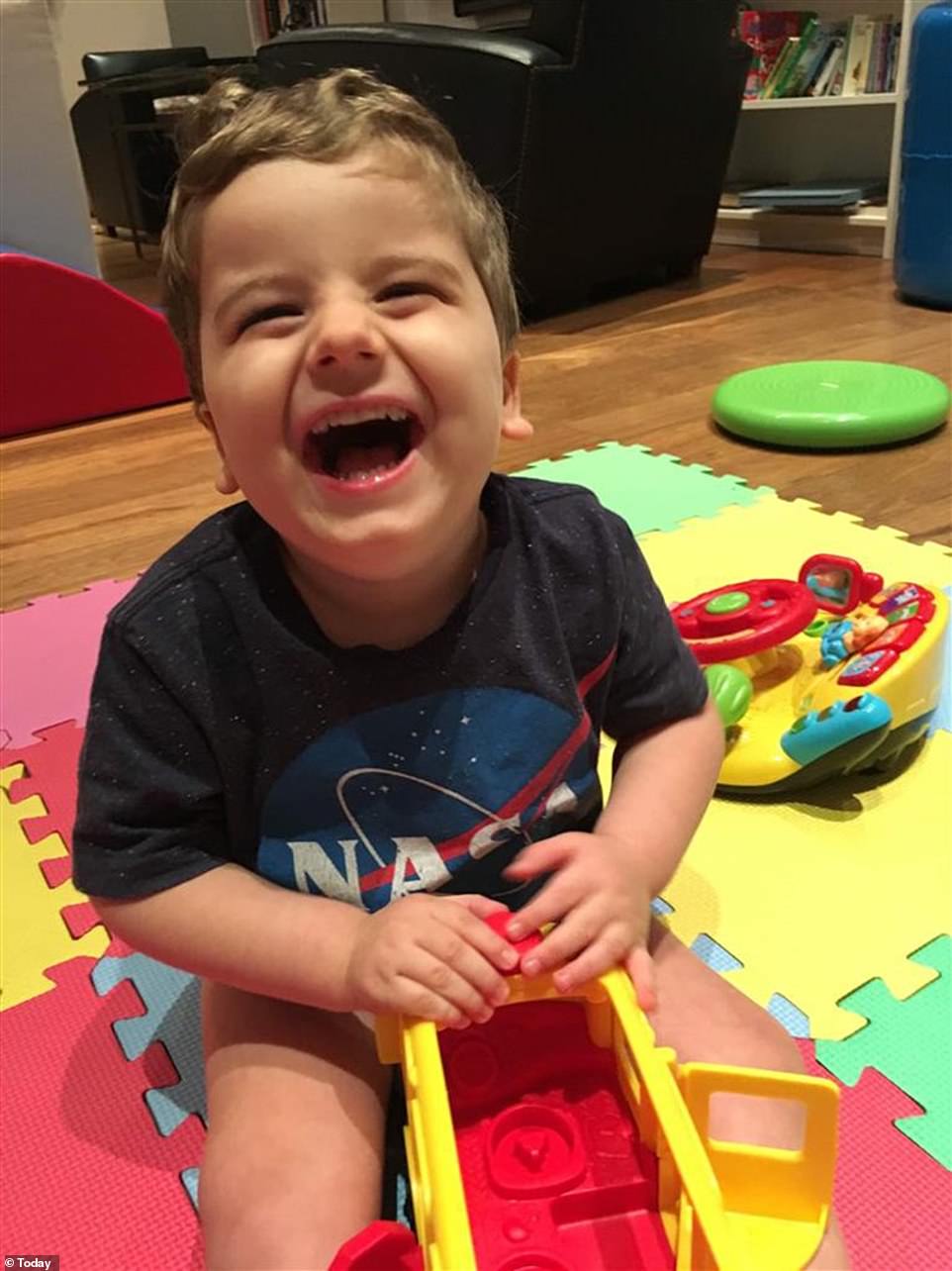 There is no cure for the mutation, which stops the brain from growing properly. Henry was unable able to walk, talk, dress himself, or have the mental capacity beyond a toddler

In 2020, Engel wrote an essay for Today about how the COVID-19 pandemic had been a ‘nightmare’ for his son who had been cut off from the therapies that had enriched his life.

Before the pandemic, Henry was enrolled in a number of therapies that stimulated him and brought him joy, including equine therapy.

He rode a horse named Coco with the help of two attendants, and not only did Henry visibly enjoy the rides, but the rocking movement helped strengthen his core.

‘He did astronaut therapy in a soft-play room, spinning on a large Lazy Susan to let him feel a mild centrifugal force,’ Engel added. 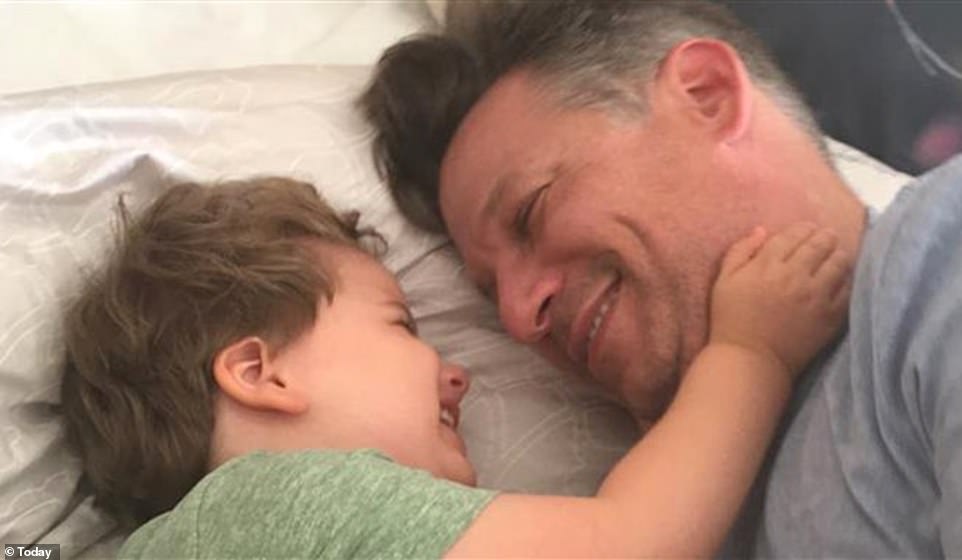 Henry could only interact through ‘sight, sound, and touch,’ so Engel and Forrest constantly cuddled him, praised him, massaged him, and gave him kisses 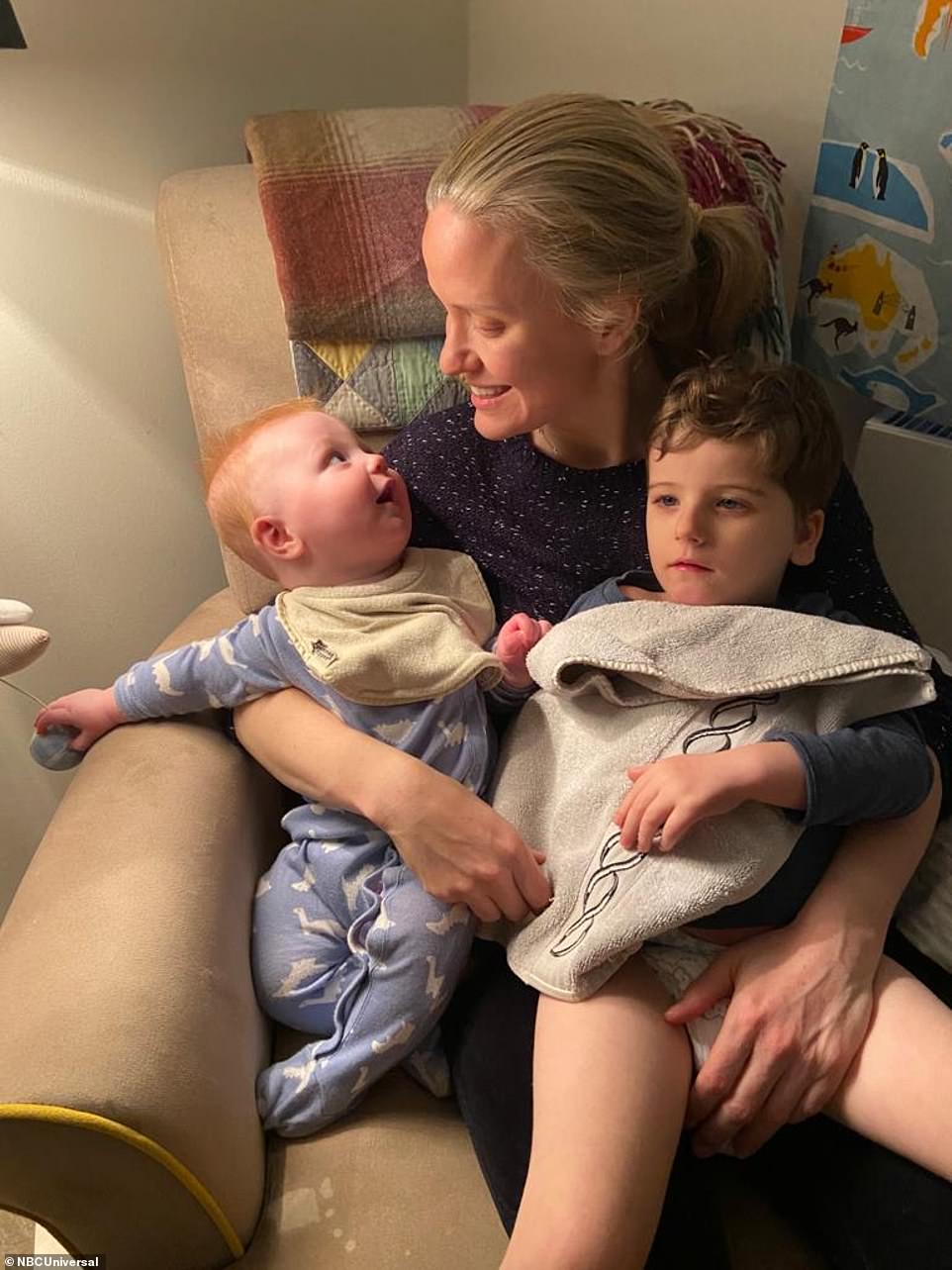 Engel and Forrest welcomed their son Theo in 2019, and he told People at the time that it was difficult to know that their baby boy would soon pass Henry’s developmental milestones 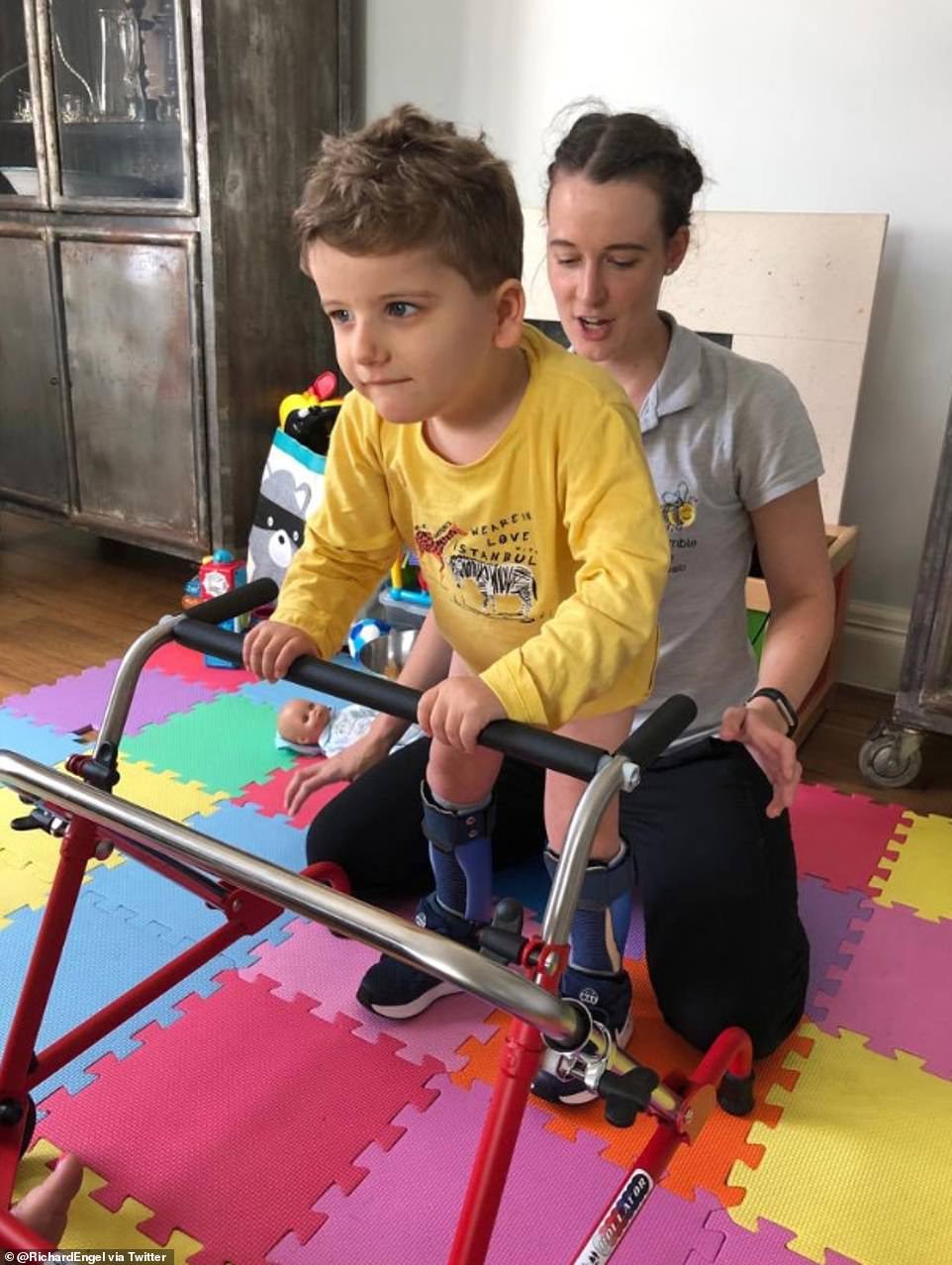 ‘He did music therapy and enjoyed touching the vibrating guitar strings. He did hydrotherapy in a warm pool with hoists attached to the deck. He went to a school, for a few hours a day, with an aide who helped him.’

The dad explained that without therapy, Henry was ‘bored’ and ‘whiny.’ He could only interact through ‘sight, sound, and touch,’ so they constantly cuddled him, praised him, massaged him, and gave him kisses.

But despite their efforts, they still noticed a ‘deterioration in Henry’s overall condition.’ Since the start of the pandemic, his tremors and body shakes had become more pronounced.

His hand-mouthing had also become more frequent, and they had to either put his arms in braces or socks over his hands to keep him from chewing his skin until it bleeds. They weren’t sure if these symptoms were due to stress or just the progression of his condition. 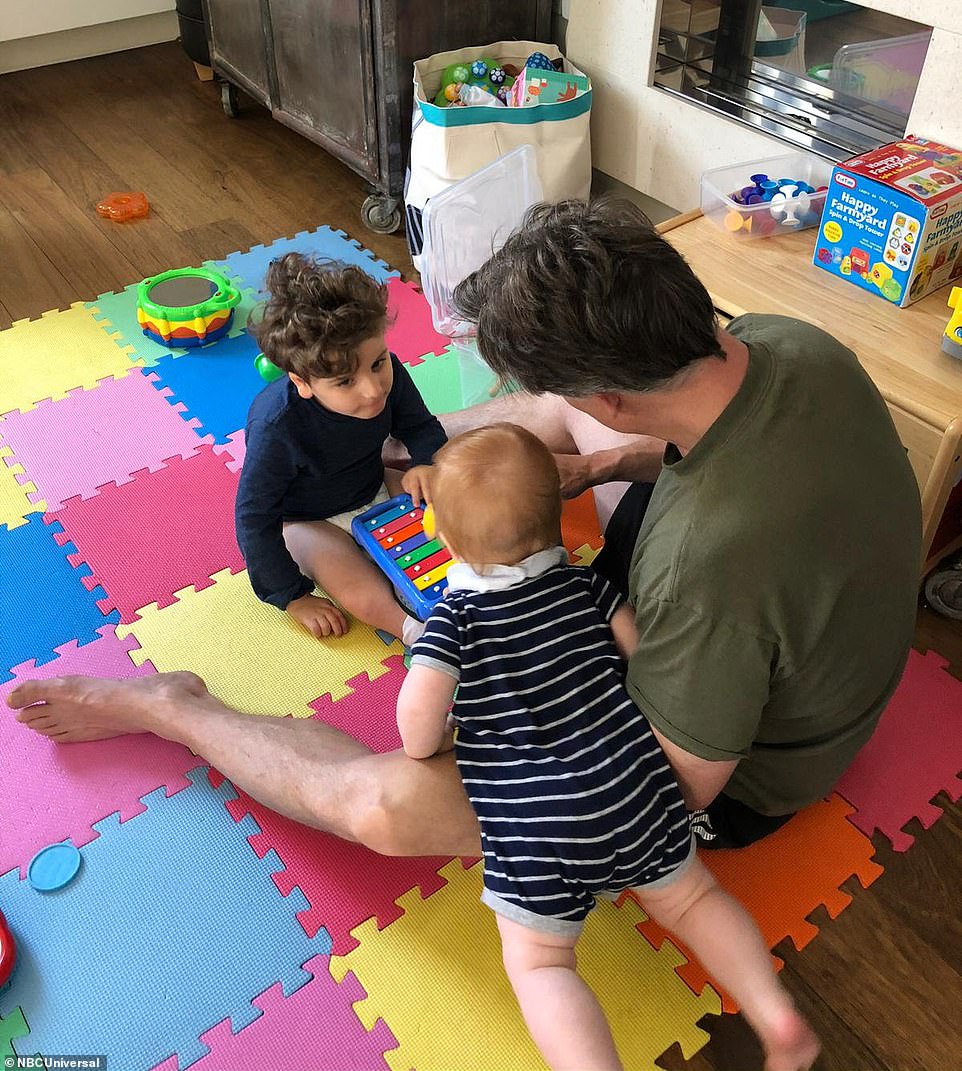 Henry was cut off from the therapies that enriched his life early on in the COVID-19 pandemic, and his parents noticed that his overall condition had deteriorated during that difficult time 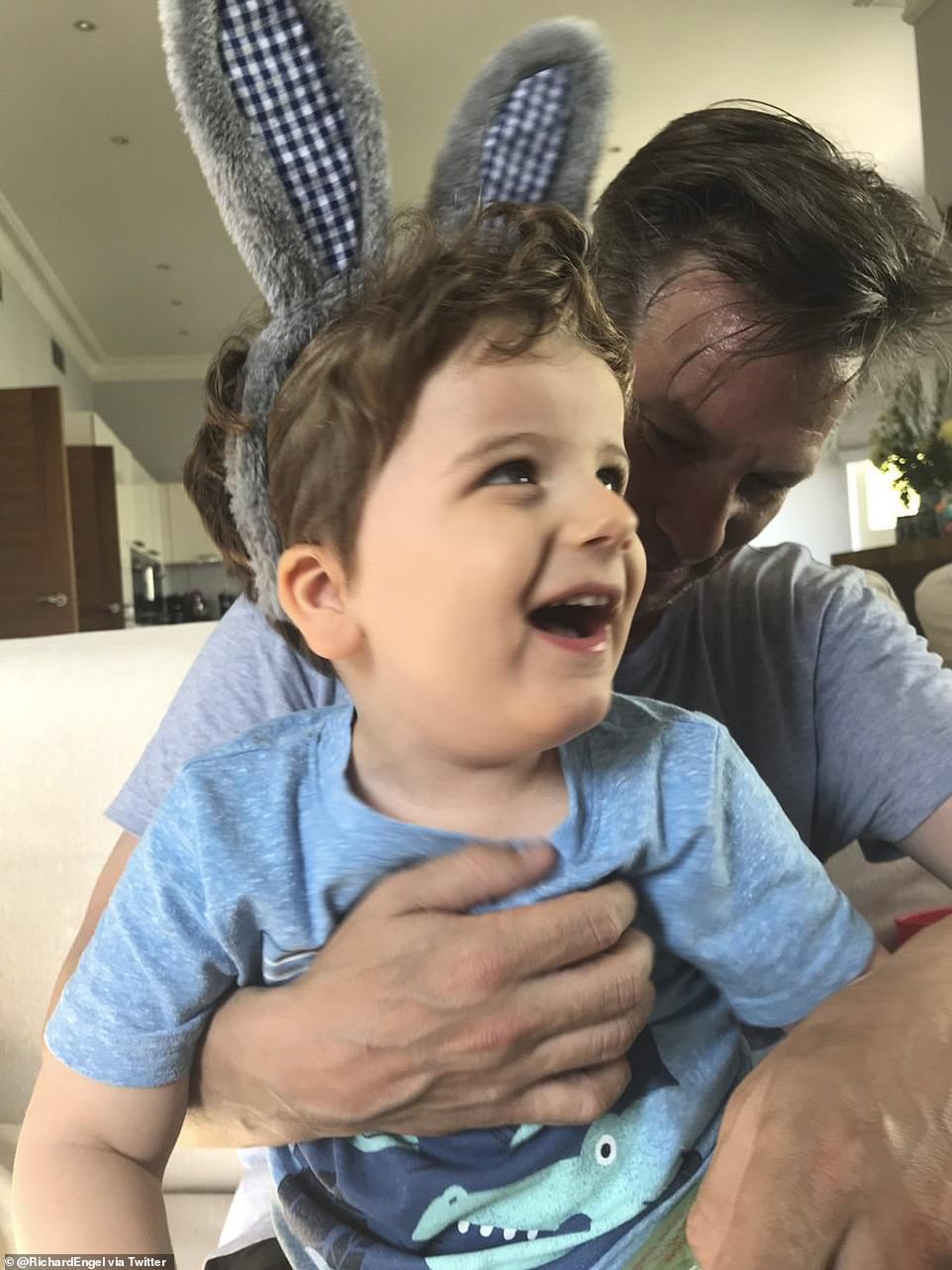 Engel and Forrest made the decision to hire a physical therapist to work with Henry during the pandemic because movement is essential for him to build strength.

Despite their struggles amid the pandemic, they considered themselves lucky to be able to afford private physical therapy and equipment to help their son.

Engel estimated that they had about $5,000 to $10,000 worth of equipment for Henry in their London home, noting that some of it was provided by local authorities.

‘That’s why I say we’re lucky. Other families can’t afford to turn their homes into therapy gyms, and not all community support is strong,’ he said.

‘Without physical therapy Henry’s body would deteriorate, collapsing under its increasing weight.’