By Abul Taher and Charlotte Griffiths for The Mail on Sunday

Jeremy Clarkson’s punch-up with a Top Gear producer led to his departure from the BBC and a huge blow to the Corporation’s most lucrative show.

But The Mail on Sunday can reveal that co-presenter Richard Hammond ended up seriously injuring a director in another incident just months later – though this time there was no malice involved.

Hammond – nicknamed Hamster – was involved in a play fight at a high-spirited party in Namibia that left the director on The Grand Tour, the motoring show on Amazon fronted by Clarkson, Hammond and James May, with a broken rib.

Richard Hammond behind the wheel on The Grand Tour, the motoring show on Amazon he co-presents with Jeremy Clarkson and James May

Last night, a spokesman for Chump Productions said: ‘There was a fairly raucous wrap party after we had finished a gruelling shoot.

‘Play fighting did indeed ensue among the crew, including Richard, and a member of the crew did indeed suffer from a broken rib.

‘It remained play fighting throughout and did not get nasty. Chump did not pay any medical expenses because the event happened post-shooting.’

The firm said the injured assistant director still works on The Grand Tour and there was no ‘bad feeling, malice or grievance’ as a result of the incident in 2016. 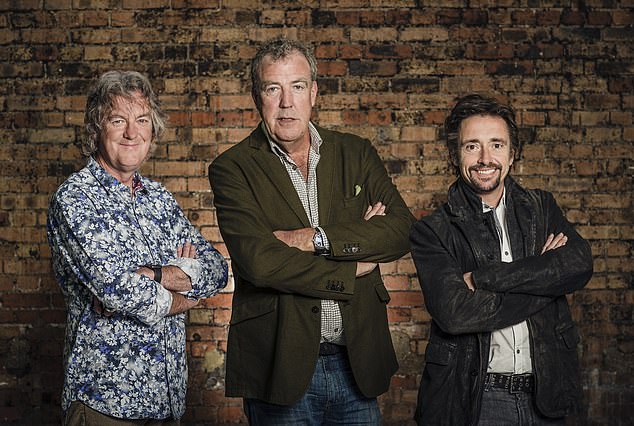 When BBC Director-General Tony Hall said Clarkson’s contract would not be renewed, he, Hammond and May (pictured) all jumped ship to Amazon

The same cannot be said of Clarkson’s bust-up in 2015, when he punched Top Gear producer Oisin Tymon in a Yorkshire hotel because no hot food was available after filming.

When BBC Director-General Tony Hall said Clarkson’s contract would not be renewed, he, Hammond and May all jumped ship to Amazon where they signed a multi-million-pound deal for Grand Tour.

It has become one of the most popular shows on Amazon Prime while the new incarnation of Top Gear on the BBC, presented first by Chris Evans and then by Matt Le Blanc, has struggled.