Hallelujah! This is a production that enhances rather than detracts from the opera. All too often opera directors are like a bulky man who stands between you and a great masterpiece in the National Gallery, blocking your view.

Not Richard Jones, who rightly won an Olivier Award for the first run of this Lady Macbeth Of Mtsensk back in 2004.

His depiction of the awful Ismailovs, and their sometimes cowed, often rampant workforce and hangers-on, displays a sure comic and dramatic touch, constantly illuminating Shostakovich’s own anarchic libretto. 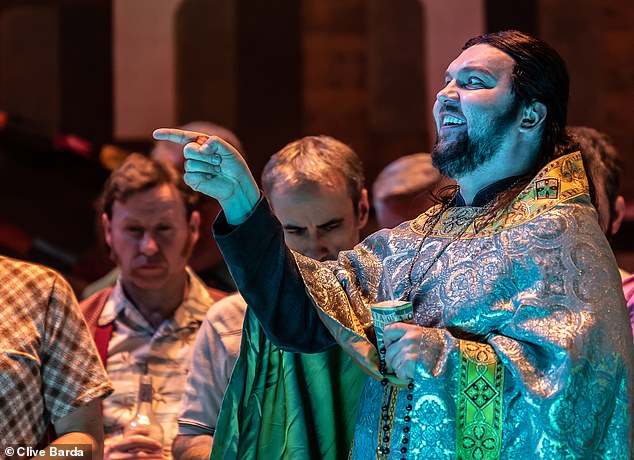 Hallelujah! Richard Jones’s compelling production of Lady Macbeth Of Mtsensk is one that enhances rather than detracts from the opera (Wotjek Gierlach as The Priest, above)

And, after a decade away, it’s back better than ever, under director Elaine Kidd.

As Katerina, the angry and frustrated housewife who develops a penchant for bumping off her relatives, Eva-Maria Westbroek returns in great style.

Older of course, and not quite the sexy young thing of Shostakovich’s imaginings, but still a real singing actress in her prime.

Sir John Tomlinson is also back, after 40 years with the Royal Opera, as her lecherous, bullying father-in-law Boris, who gets his come-uppance from a dish of mushrooms, thoughtfully laced with rat poison by the ever-attentive Katerina. 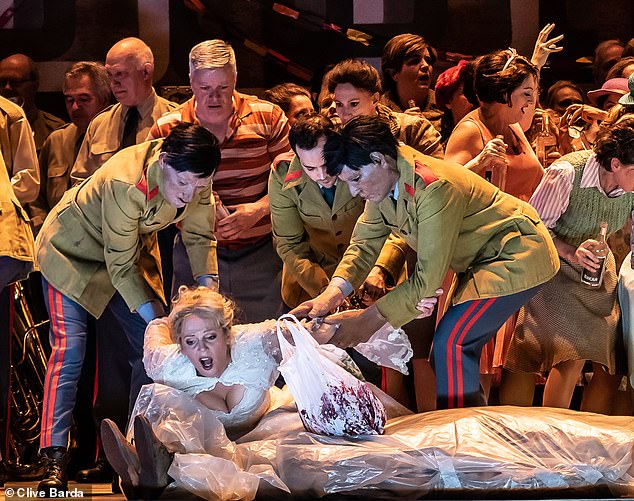 As Katerina, Eva-Maria Westbroek (above centre) returns in great style as does Sir John Tomlinson but it’s newcomer Brandon Jovanovich who makes this revival particularly special

But what makes this revival special is a newcomer, American tenor Brandon Jovanovich, as Sergey, the alpha-male, womanising labourer who starts off dominating Katerina (to her obvious delight) but ends up a mere pawn in her game.

Jovanovich, making his Covent Garden debut, totally inhabits the role, both dramatically and vocally, with a physique and stage presence that brings Sergey to life in a way that hasn’t happened in previous outings.

Shostakovich got into huge trouble with Stalin with Lady Macbeth Of Mtsensk, and effectively retired from operatic writing before he was 30.

What a loss. What triumphs might have lain in store, on the basis of this totally compelling, and often uproarious, piece.

In the novel, Katerina is presented as a murderous and remorseless woman, hence being called Lady Macbeth.

Shostakovich’s Katerina is rather different; a strong woman striving to regain some control of her life, amid almost intolerable pressure to conform. No wonder Stalin wasn’t too keen!

I know I keep saying this about Pappano nights, but his band have rarely sounded better, especially the brass.

What a shame this is only around for a short run. Hopefully we won’t have to wait another decade before they bring it back.