There was perhaps just one consolation for the Prince of Wales yesterday — he was at Birkhall in Scotland, just about as far away from the centre of the royal drama over Prince Harry’s departure as he could be.

Time and again at moments of crisis and great sadness Charles has sought solace in the familiar hills above the royal estate at Balmoral. He retreated there after the death of his beloved grandmother in 2002, and it was where he received the devastating news that Princess Diana had been killed in a car crash in Paris five years earlier.

On both occasions Harry was there, too. In the grief the prince suffered over the Queen Mother, Harry was a good-humoured companion, while in 1997 Charles was a hugely comforting presence amid the great shock of his ex-wife’s death.

In loss and sorrow, father and son forged deep bonds, a closeness that has endured in the face of frequent outbreaks of domestic adversity: Harry’s teenage drug-taking years, the stumbling out of nightclubs, the embarrassment of that naked romp in Las Vegas and the rift with William.

Prince William, Prince Harry and Prince Charles watch the athletics during the Invictus Games in 2014 in London

And it is why he has been so wounded — ‘floored’ was the word being used yesterday by aides to describe the prince’s mood — over the Harry and Meghan affair.

No one, he believes, could have been more welcoming to his daughter-in-law or more willing to stick his neck out for his son.

When the couple went to him with their plan for a wedding at St George’s Chapel — in the face of critics unhappy that Meghan had been married before — it was Charles who persuaded the Queen to allow it to happen.

‘He pushed his mother to give his son what he didn’t manage to achieve for himself when he wed Camilla — marrying a divorcee in church,’ says a friend.

Not only that, but when Meghan’s father was unable to attend the ceremony, the prince agreed to Harry’s request to walk his wife-to-be down the aisle.

He supported their move to Frogmore, paying out tens of thousands of pounds on fixtures and fittings for their new home, and allowed them to split away from William and Kate at Kensington Palace and establish their own court at Buckingham Palace. 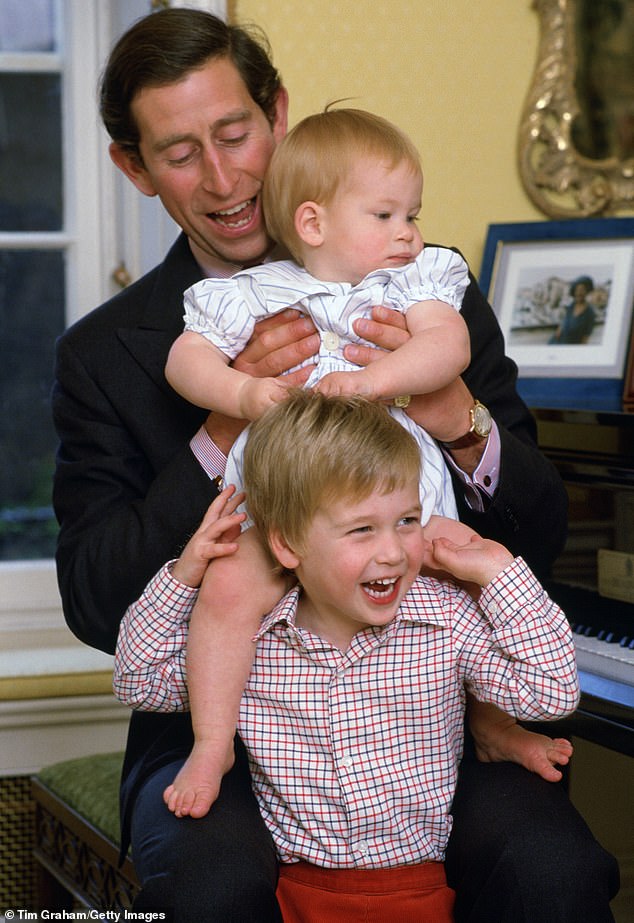 For Harry, the relationship with his father, while warmer than that between Charles and William, has always been complex.

Harry’s public testimony three years ago about his own mental issues confirmed the long shadow cast over the prince by the catastrophe of losing his mother so young. He disclosed how, as an adult, he came close to a mental breakdown while still struggling to come to terms with her death, and sought psychiatric help.

Here was a man, then 32, blessed with every possible privilege, admitting his suffering was still so great that he’d had to seek psychiatric counselling.

How well he had hidden it from the public. Who could have imagined that the clown prince joshing with sprinter Usain Bolt in Jamaica, laughingly drinking rum and dancing with the locals in Belize, was privately carrying such deep emotional scars? Known for having a fiery temper — he has lashed out at paparazzi photographers at least once — he revealed that he took up boxing to help control his aggression, just as his mother tried kick-boxing as an emotional outlet after the break-up of her marriage. 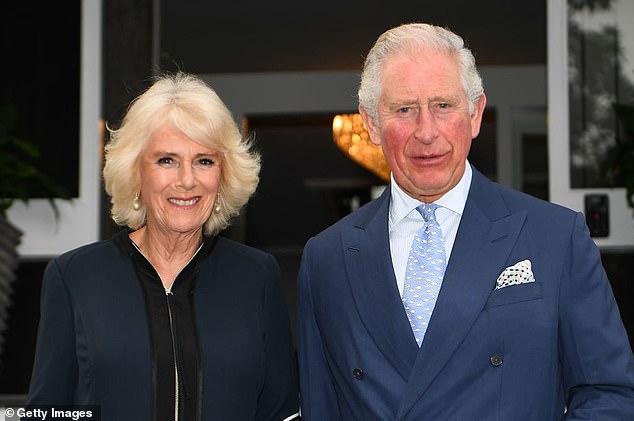 Of course, there was one area where both boys held a shared view: Camilla. But both William and Harry have never enjoyed an easy relationship with her

Diana always saw herself as a strong woman, ever vigilant about both her sons, but especially Harry, whom she knew was vulnerable.

The princess would have been aghast at the thought of Harry as a 17-year-old drinking after hours at the Rattlebone pub in Sherston, a few miles from the Highgrove estate, and smoking cannabis in the shed round the back. Few doubt that had she still been alive, he wouldn’t have done it.

His problem at that time was that he felt very alone. Prince Charles was largely absorbed in his own problems, trying to win public acceptance for Camilla, and William was away at university in Scotland.

Back in those teenage years, Harry was certainly a worry to his father, as well as palace courtiers. It was not so much his pursuit of women but the way the absence of a mother’s guiding hand and moderating presence had unleashed his wilder side. During his geography and art A-levels revision, he partied away in Kensington until 2am, puffing his way through a packet of cigarettes in an evening (he quit smoking after meeting Meghan).

But it was when both boys came to record tributes to their mother to mark the 20th anniversary of her death in 2017 that the rawness of their relationship with their father became starkly clear for all to see.

Only Harry could bring himself to reference his father — from William there was not a word. 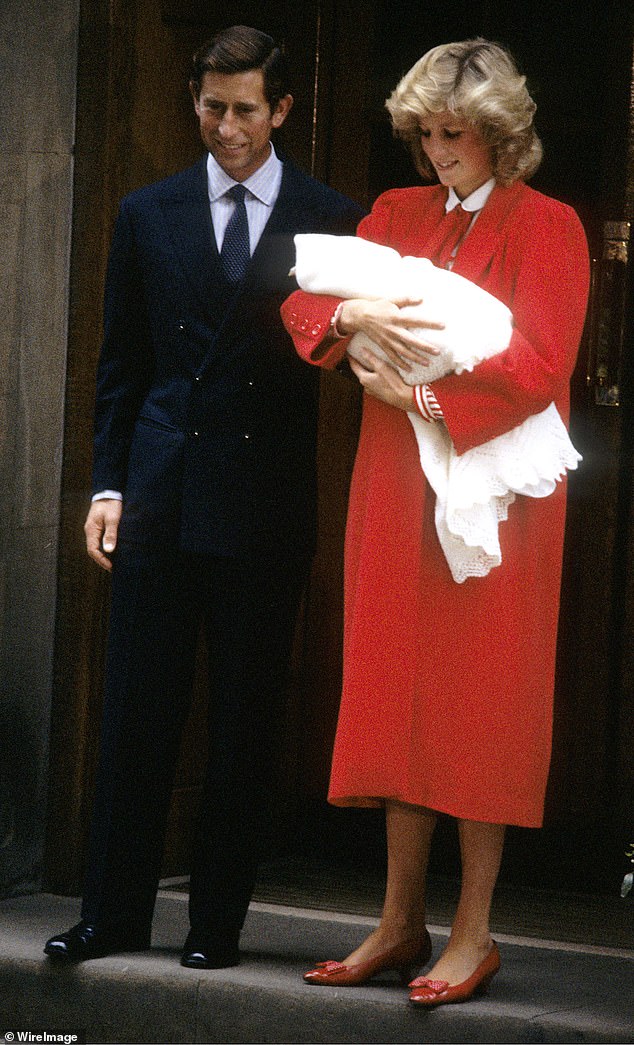 Diana always saw herself as a strong woman, ever vigilant about both her sons, but especially Harry, whom she knew was vulnerable. Pictured: Princess Diana and Prince Charles leaving St.Mary’s Hospital in Paddington with Prince Harry in September 1984

Before Meghan came on the scene, it was Harry who was the bridge-builder between Charles and his brother. After the prince’s gentle complaint that he did not see much of his first grandson, Prince George, Harry encouraged William to be a little more welcoming to their father.

Of course, there was one area where both boys held a shared view: Camilla. In many ways the Duchess of Cornwall has played a faultless role, never assuming the position of stepmother in the young princes’ lives and steering clear of family confrontations.

But both William and Harry have never enjoyed an easy relationship with her. Three years ago when the brothers were working on plans to put up a statue to their mother — they are still working on them — they invited a number of Diana’s friends to contribute memories.

Several were invited to Nottingham Cottage, Prince Harry’s bijou home at Kensington Palace before his move to Windsor. One recalled how, when discussing their mother’s sadness over the breakdown of her marriage to Prince Charles, Camilla’s name had come up.

Harry’s face darkened. ‘He didn’t want to talk about her,’ said the friend. ‘William said nothing, too. It spoke volumes.’

Indeed, the story of the statue, which is due to be placed near Diana’s old home at Kensington Palace, has been another source of tension. ‘There has been disagreement over the preliminary models, what period in the princess’s life the statue should represent,’ one of the princess’s old friends says. ‘It will be a great shame if these latest developments jeopardise this project.’

To the wider public the story of how brothers once whisper-close could have fallen out so spectacularly is one of the saddest aspects of the whole saga.

For all their polished, easy-going charm both boys are notoriously thin-skinned. It’s true that Harry reacted in a hot-headed way when his brother urged caution in the early weeks of the romance with Meghan. And it’s also true that neither William nor Kate were quite as welcoming to the American-born actress as they could have been. 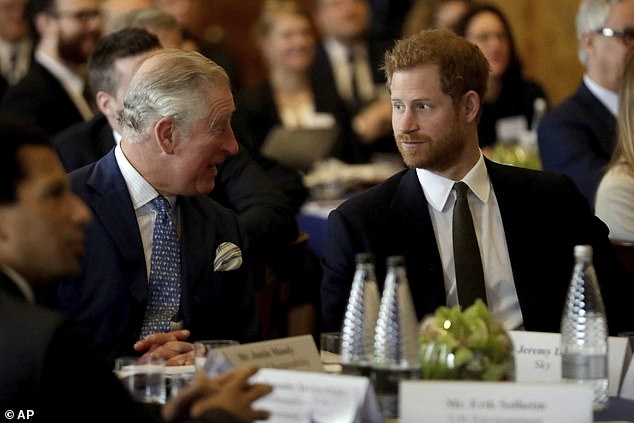 Prince Charles is anxious for this existential crisis to pass quickly, but he has been dismayed by suggestions that racism has been underlying the criticism of Meghan

The problem was that having taken aggressive positions with each other, both boys failed to draw back. No wonder the broadcaster Tom Bradby, a friend of both boys, reported that there was a wry smile from Harry when he learned that the crisis had brought Charles and his older son, once barely on speaking terms, closer because of the behaviour of the younger.

There was sibling rivalry too, envy even, over the Sussexes’ global popularity. ‘William is very conscious of his position, and having seen how his mother used to upstage his father, he has no intention of allowing Harry to do that to him,’ says a courtier. ‘They’re a complicated pair.’

For Charles, who at the age of 48 and set in his ways found himself a single parent to two teenage boys, the years after Diana’s death were tricky. With so much of his own life regimented and given over to royal duty, who could blame him if he took an easy route with his sons?

His attitude was to take the path of least resistance. This sometimes allowed him to be seen to be weak and as the boys got older they would exploit it. They saw him as a fuddy-duddy and regarded him with affectionate ridicule. One aide goes further and says both boys ‘bullied’ their father.

‘They showed him little respect and never deferred to his diary of engagements,’ says the aide. ‘This was important because the Royal Family is run on business lines with each part working to support the other. It means not upstaging each other.

‘Yet on three occasions when the Prince of Wales was undertaking important business on behalf of the Government, the boys made announcements themselves that stole the headlines.

‘Of course, he didn’t say anything. He was angry and hurt, but he was never as decisive as he should have been.’

All this and more was on the prince’s mind as plans for Harry’s post-royal resolution was being drawn up. The loss of Harry’s military patronages was key.

‘The respect for the Royal Family from the armed services is enormous, unquantifiable — but being half in and half out does not help the forces or the royals,’ said a source.

Both Charles and the Queen viewed the issue as non-negotiable. So, too, crucially, did William. Even though the brothers no longer get along well, William knows how much his Army years and connections mean to him.

Was this a punishment for breaking away? Undoubtedly, some will see it as such. For the royals the issue was clear: there had to be a lessening of status for the couple.

Prince Charles is anxious for this existential crisis to pass quickly, but he has been dismayed by suggestions that racism has been underlying the criticism of Meghan.

‘He has found that quite unedifying,’ says a friend. ‘With his close links to the Afro-Caribbean community he has fostered over many years, he finds that idea offensive.

‘He genuinely believed that Harry’s marriage to a mixed-race American divorcee not only signalled the diversity of modern Britain but also quite possibly marked the beginning of a new era for the House of Windsor. It was why he pushed so hard on letting them marry in church. He was saying ‘this is the modern way and we must move with the times’.’

For now his dream of a slimmed-down monarchy is turning into a nightmare, with the Royal Family shrinking before our eyes. It is why he insisted the couple should retain their HRH titles, even if they can no longer use them.

‘There’s a way back if things don’t work out,’ says one figure.

Among courtiers, the intervention of the Duchess of Sussex’s father Thomas Markle in which he attacked his daughter and son-in-law for turning their backs on royalty provided the only moment of light relief.

‘When Mr Markle accuses them of cheapening the royal brand, we’ve reached a pretty poor pass.’