Back when I was an industrial correspondent in the Seventies and Eighties, we had a word for employees who refused to go to work.

It was called a ‘strike’.

The unions withdrew their labour and their members didn’t get paid.

Most of the time, these strikes were over money, even though Britain was an economic basket case.

They lasted until one side caved in or some kind of shabby, face-saving compromise could be cobbled together.

Undoubtedly, the workers had the whip hand. A joke doing the rounds at the end of a two-month strike at the Ford Motor Company imagined a triumphant union leader addressing a mass meeting outside the Dagenham plant.

‘Brothers and sisters, we have achieved a great victory. Management has agreed to a 35 per cent wage increase, ten weeks’ holiday, a company car for every employee and a reduction in the working week. In future, you will only have to work Wednesdays.’

From the back, a voice pipes up: ‘What, every bloody Wednesday?’

There was always an element of the Theatre of the Absurd about these negotiations. During one prolonged national rail strike, Private Eye magazine produced a perfect parody, which went something like this:

‘British Rail managing director Mr Lucifer today offered Leyland striking staff “all the kingdoms of Heaven and Earth and the glory thereof” in a bid to break the deadlock.

‘Mr Sidney Weighell, general secretary of the National Union of Railwaymen, rejected the offer as “derisory”.’

Sid Weighell was a force in the land, as were his opposite numbers in the other unions.

The leaders of the transport workers, Jack Jones; engineers, Hughie Scanlon; train drivers, Ray Buckton; the postal workers’ Tom Jackson, celebrated for his Jimmy Edwards-style handlebar moustache; and the miners’ hardman Joe Gormley were all household names, as powerful as any Cabinet minister.

The successive heads of the TUC (Trades Union Congress), Vic Feather and Len Murray, were honoured guests at No 10, helping to set national policy.

Many’s the time I’ve stood in Downing Street as the TUC general council trooped in to the Prime Minister’s official residence for beer and sandwiches.

At one stage, BL employed 180,000 people across Britain. On any given day, at least a third of them were on strike or working to rule.

Then there was a young firebrand called Arthur Scargill, from Barnsley, who rose to become president of the National Union of Mineworkers. 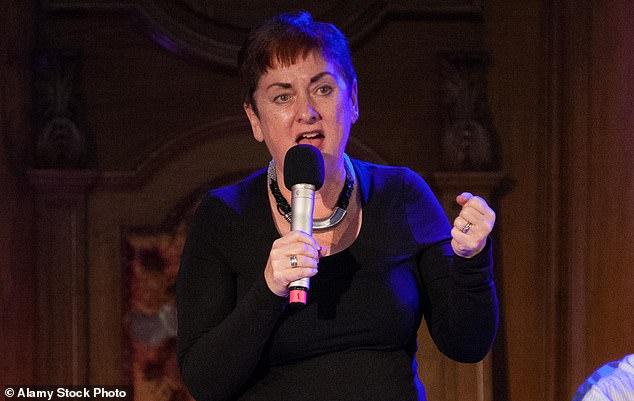 The National Education Union’s joint general secretaries — Kevin Courtney and Mary Bousted (pictured) — urged their members to intimidate head teachers who attempt to reopen their schools, by accusing them of putting the lives of their pupils at risk

In 1984, without balloting his members, Scargill called the strike to end all strikes. Ostensibly it was to halt pit closures, but its real aim was political.

Most of the uneconomic mines earmarked for closure would have had to close anyway.

Scargill intended to use the NUM’s industrial muscle to bring down a democratically elected government, deploying mass picketing and extreme violence if necessary.

He’d bargained without the resolve of a post-Falklands Mrs Thatcher. The miners were forced back to work a year later, having been roundly humiliated.

The strike to end all strikes had succeeded spectacularly, but not in the way Scargill had intended. His defeat spelled extinction for the traditional trades union dinosaurs.

Britain had come a long way from 1974 when then Prime Minister Ted Heath, after two crippling coal strikes, culminating in the Three-Day Week, decided to call an election on the issue of Who Runs Britain — the Government or the NUM?

Heath didn’t get the answer he wanted. The country, narrowly, chose the NUM and returned a Labour government. By 1985, we’d long since had enough of the unions holding the country to ransom.

So when Rupert Murdoch moved his papers out of Fleet Street shortly afterwards, and militant print unions laid siege to his new Wapping plant in East London, there was only going to be one winner.

Murdoch, like Thatcher, won hands down, with widespread public support. Wapping was the last throw of the union dice. British Leyland went bust, brought to its knees by industrial action, new technology killed the print unions and, by 2015, the active membership of the NUM had fallen from 170,000 before the strike to just 100.

Many of Scargill’s members never worked again. But Barmy Arthur managed to cling on until 2002, on full pay, subsidised mortgage and a company flat in London’s upmarket Barbican.

As Eric Hammond, then leader of the moderate electricians’ union, remarked: ‘Scargill went into the miners’ strike with a big union and a small house and came out of it with a big house and a small union.’

After that, days lost to industrial action tumbled dramatically. The unions became an irrelevance, allowing Tony Blair to shape New Labour in his own image.

Britain finally became a consumer-led society, not one dictated to by state-run producers.

All those soppy millennials and idealistic under-40s seduced by Jeremy Corbyn’s vision of a glorious, sun-lit socialist Utopia could benefit from a crash course in our fairly recent history. 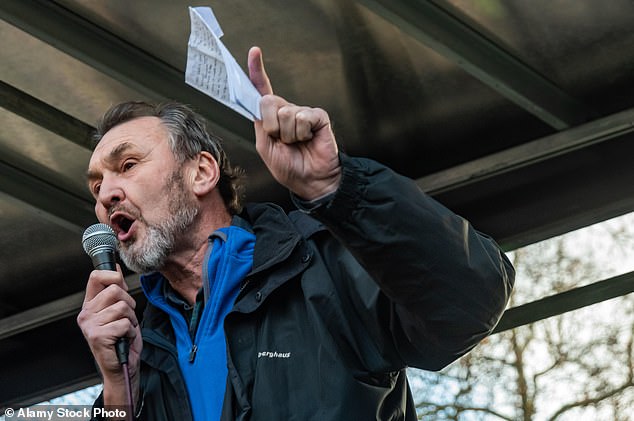 They may not be Arthur Scargill, but they are far-Left fanatics, including Kevin Courtney, hell-bent on causing the maximum disruption and embarrassment to a hated Conservative Government

Today, they’re used to instant gratification and an unlimited choice of smartphones. They wouldn’t believe that in the early Eighties — because of union closed shops and intransigent bureaucracy — it could take six months to get a telephone installed at home. Same went for gas and electric cookers, all under the control of heavily unionised state monoliths.

Clearly, we’re not going back to the future — at least, as far as what remains of our industrial base is concerned.

The service sector and the gig economy are flourishing and trades union membership has fallen from 13.5 million at the time of the Winter of Discontent in 1979 to 5.5 million today.

The majority of that membership is in the public sector, which has escaped relatively unscathed and unreformed.

In fact, it has flourished and expanded as the state has extended its reach into every nook and cranny of our lives.

In the Forties, Fifties, Sixties and Seventies, governments nationalised industries. From 1997 onwards, they concentrated on nationalising people and behaviour.

Now, thanks to Chancellor Rishi Sunak’s coronavirus furlough scheme, more people are on the Government payroll — at least temporarily — than at any time since the State owned everything from the water companies to British Aerospace.

That’s emboldened the TUC General Secretary Frances O’Grady, who practically no one had heard of until this week, to gloat in The Guardian (where else?): ‘The unions are back . . . and the State is, too!’

What’s also back is the question of Who Runs Britain — the Government or the unions? We thought we’d seen the last of that particular dilemma with the crushing of the NUM in the Eighties.

But Covid-19 has revitalised the Left, which is revelling in the blanket exercise of State power and tsunami of public spending. They plan to make hay — even if they’re trying to build bricks from straw.

This week, the headline story on the BBC News began: ‘Union leaders today warned ministers there would be no return to work until . . .’

I thought I’d just stepped out of the Tardis and had been transported back to the early Eighties.

That was the last time the unions thought they could push around a government with a large majority.

Yet now they can smell weakness in Boris Johnson, still recovering from a near-death experience, and his wet-behind-the-ears Cabinet.

Fanny O’Grady and Unite’s Len McCluskey think they can exploit the public’s admiration for heroic NHS frontline workers to force an increase in the minimum wage for all and a massive, permanent increase in public spending.

After all, Dishi Rishi does seem to have discovered that mythical magic money tree we were told didn’t exist. No wonder the unions are trying it on.

But this time it’s not the miners flexing their muscles, dictating terms. The rail unions are making noises, but they’re not the force they were. In any event, thousands of their selfless members in the privatised transport firms are bravely reporting for duty and keeping Britain moving.

They can’t have another Winter of Discontent, either, since not emptying the dustbins is now part of the Government’s ‘green’ agenda, not wildcat industrial action.

No, the big trouble is coming from the teaching unions, who are resisting all attempts to reopen the schools on June 1.

They may not be Arthur Scargill, but they are far-Left fanatics hell-bent on causing the maximum disruption and embarrassment to a hated Conservative Government.

They are hiding behind elf’n’safety, the last resort of a scoundrel, insisting that they are only concerned about the welfare of children and teachers.

But their real motivation was blown out of the water by a brilliant Mail exposé of their internal discussions, which they ineptly managed to load on to YouTube this week.

The National Education Union’s joint general secretaries — Kevin Courtney and Mary Bousted —urged their members to intimidate head teachers who attempt to reopen their schools, by accusing them of putting the lives of their pupils at risk.

Heads who refuse to co-operate should be threatened with shaming on social media and health-and-safety regulations should be used to keep school gates shut.

This is despite the fact that even the British Medical Association now says that it is safe for a phased restart of education, and all over Europe schools are going back without any reports of children becoming infected or passing on Covid-19.

The NEU may wrap itself in a cloak of bogus moral and intellectual superiority, but the difference between physically intimidating a working miner and blackmailing a headmaster is merely one of degree.

Bousted really gives the game away, her disgusting Left-wing hypocrisy laid bare. She poses as a defender of vulnerable children, yet tells her members one reason for not going back to work is because ‘Reception and Year 1 pupils . . . who are mucky, who spread germs, who touch everything, who cry, who wipe their snot on your trousers or dress’.

And here’s the devastating punchline. Bousted admits privately that all this scaremongering and posturing is merely a ‘negotiating position’.

So if the Government were to give teachers an immediate £5,000-a-year pay rise, they’d throw caution to the wind and report back tomorrow?

For now, though, it’s cost-free industrial action. Teachers, like the rest of the public sector, are still receiving their full salaries, whether they are working or not. So they’ve no incentive to go back.

Ministers should call their bluff. If members of the NEU refuse to return on June 1, the Government should cut them off without a penny. If they won’t work, they shouldn’t get paid.

Nothing’s changed. We’ve still got a word for employees who withdraw their labour.