RICHARD LITTLEJOHN: Britain has taken leave of its senses

Britain has to decide if it is a serious country or a joke, the Tory MP Jacob Rees-Mogg said yesterday in relation to the deal we eventually strike over Brexit.

But he could equally have posed this question about the state of the nation as a whole.

To which the answer would have to be: depends what you mean by ‘joke’.

Not a day goes by without lunacy hitting the headlines

Certainly, there’s plenty to laugh at in modern Britain. Barely a day goes by without another piece of lunacy hitting the headlines.

Take the story over the weekend about the two women who gatecrashed a men-only swimming session in South London, after telling staff they ‘self-identified’ as male.

On one level, we all had a good chuckle. ‘I say, Henry, that chap’s got a pretty impressive pair of man-boobs.’

‘The fella in the pink floral bathing cap.’

Yet, on another, it is either complete madness or deadly serious, according to your point of view.

The women were feminists, making a legitimate protest against new gender equality laws that would allow people to pick their own sex, regardless of biology.

At Dulwich Leisure Centre, they were pushing on an open door. The staff were too terrified of being accused of ‘transphobia’ to refuse them admission.

Much excitement over the news that scientists at the University of Washington have developed a male contraceptive pill, which has been safely tested on men aged between 18 and 50.

Apparently, you put it in your shoe and it makes you limp.

In any event, I can’t think of many blokes who would object to a couple of half-naked women doing the back stroke, even if it was technically a men-only night.

But the reverse doesn’t apply. The real problem arises when men who identify as women demand the right to use exclusively female facilities.

This is where even the most rabid feminists and fanatical ‘trans’ activists fall out. Women don’t want to share changing rooms, toilets and all-women swimming sessions with someone in possession of a five o’clock shadow and male genitalia.

In any sane world, individuals with a full set of wedding tackle should not be allowed to describe themselves as ‘women’ and claim all the privileges and protections which go with it.

Yet the Government is considering letting people self-certify their gender without any medical diagnosis — despite the potential distress it could cause to more than half the population.

Hospitals have stopped calling mothers ‘mothers’ because it might upset the trans-fascists. A couple of weeks ago, retailers were knocking out gender-free Mother’s Day cards.

You couldn’t make it up.

This is the crazy world we live in, one in which a private girls’ school is thinking of installing ‘gender-neutral’ toilets, even though it has no transgender pupils. How long before every girls’ school in the land has to be fitted with urinals?

So you tell me: is this a serious country, or a joke?

In recent years, official Britain has taken leave of its senses, especially when it comes to ‘diversity’.

Any old crank or axe-grinder can get a government grant to further their agenda, however deranged. A pair of Left-wing academics, given ten grand of taxpayers’ money, has just produced a report claiming that PE (Physical Education) in schools is ‘racist’ because football, cricket and rugby are all hangovers from the days when ‘white privileged males’ ran the British Empire.

These are just a handful of stories from the past few days. We can and do laugh them off. I’ve made a good living over the past 30-odd years writing columns making fun of this kind of stupidity.

My reaction to all those dopey birds in flimsy micro-skirts and killer heels photographed teetering through the snow like Bambi On Ice? 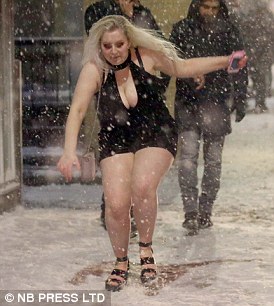 The ‘Beast from the East’ returns haunt revelers

Exactly the same as that of Winston Churchill when told that one of his ministers had been caught in flagrante delicto with a guardsman in St James’s Park, London, in sub-zero temperatures.

Makes you proud to be British!

But increasingly the joke has worn thin. For instance, would any serious country give houseroom to an alleged ‘asylum-seeker’, who claims to have trained with Izal in Syria, boasts about hating the West and, after being lavished with money and kindness, attempts to blow up hundreds of people on the London Underground?

No serious country would run down its Armed Forces, as successive governments in Britain have done, at a time of heightened tensions in the world — and then launch a recruitment campaign featuring a female soldier jumping, Anneka Rice-style, out of a helicopter to celebrate International Women’s Day. Nor would a serious country commission two expensive aircraft carriers, without bothering to provide the aircraft to use them. A serious country wouldn’t shut three-quarters of its police stations, withdraw foot patrols and expect victims to report crimes over the internet.

In a serious country, the Old Bill wouldn’t fritter away millions pursuing ‘historic’ sex crimes allegations against former prime ministers and other public figures who are dead.

A serious country wouldn’t turn a blind eye to the systematic rape of thousands of young girls by men of mostly Pakistani and Bangladeshi origin because coppers and so-called child protection officers were scared of being called ‘racist’.

In a serious country, with a sense of humour and proportion, four men who blacked up as the Jamaican bobsleigh team to raise money for charity wouldn’t be investigated for six months for ‘hate’ crime.

Drunken men at the Cheltenham Festival are photographed groping near-naked women hired for their night’s entertainment.

Am I missing something here?

In any serious country, those responsible for the national transport infrastructure — roads, railways and airports — wouldn’t throw in the towel in the face of a few flurries of snow. Nor would the roads be pitted with potholes. You’d get your dustbin emptied every week as a basis for negotiation.

In a serious, mature democracy, MPs wouldn’t grant the people a binding referendum on national sovereignty and then move heaven and earth trying to undermine and overturn the result.

Then again, in a serious, modern country, a Seventies Marxist throwback, who sides instinctively with Britain’s enemies, and his IRA stooge Shadow Chancellor, wouldn’t be within a whisker of taking power.

You cannot be serious.

So what’s the answer to Rees-Mogg’s question? Either way, it’s no laughing matter.

There’s a tried-and-trusted way of not having all your personal information hacked on Facebook. Don’t do Facebook, or any other social media site.

So forgive me if I ignore the confected fury over Facebook data being used to target potential Donald Trump voters. The Guardian, in particular, is getting terribly excited.

If Hillary Clinton had won, we’d never have heard any more about it. In fact, when Obama was elected in 2008, he was hailed as a genius for the way in which his campaign used social media.

And in 2012, one publication carried this glowing report: ‘Barack Obama’s re-election team are building a vast digital data operation that for the first time combines a unified database on millions of Americans with the power of Facebook to target individual voters to a degree never achieved before.

‘Facebook is also being seen as a source of invaluable data on voters . . . thus allowing the campaign to access their personal data and add it to the central data store — the largest, most detailed and potentially most powerful in the history of political campaigns.’

That publication? Er, The Guardian.