RICHARD LITTLEJOHN: Doesn’t Project Fear ever take a day off?

Seems like I’m not the only one who doesn’t do honeymoon periods. Project Fear hasn’t missed a beat since Boris got the job.

Yesterday’s World At One on Radio 4 was a collector’s item, a veritable cornucopia of Scare Stories ‘R’ Us.

Not since miserablist Leonard Cohen’s first album has there been a more depressing 40-odd minutes of music to slash your wrists by.

Prime Minister Boris Johnson is pictured above giving a speech earlier this week at the Science and Industry Museum in Manchester. Project Fear hasn’t missed a beat since Boris got the job

No turn was unstoned in the producers’ efforts to put the fear of God into us. They even managed to track down a professor in Australia, of all places, to warn that No Deal Boris was passing a death sentence on what remains of the British car industry.

This was predicated upon Vauxhall saying it might have to reconsider plans to build a new model at Ellesmere Port.

Now there’s a surprise. Multinational motor manufacturers never miss a trick when it comes to putting the squeeze on governments for tax-breaks, regional development grants and so forth.

Given that Boris is already planning to bribe the North with a tsunami of public money, it wasn’t necessary.

Merseyside can expect a large bung from the Treasury, especially with lone Scouse Tory Esther McVey in the Cabinet, and Vauxhall will almost certainly be one of the beneficiaries. 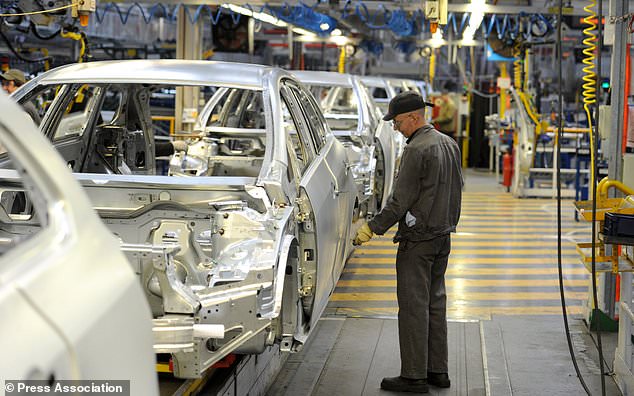 They even managed to track down a professor in Australia, of all places, to warn that No Deal Boris was passing a death sentence on what remains of the British car industry. This was predicated upon Vauxhall saying it might have to reconsider plans to build a new model at Ellesmere Port [File photo]

The truth of the matter is that, Brexit or not, the car industry is in far better shape than any time in history, including when I covered it in the Seventies and British Leyland was a byword for clapped-out nationalisation and industrial anarchy.

Still, why let the facts get in the way of a good horror story?

This latest doomsday bulletin from Project Fear was as predictable as the Confederation of British Industry going into full Grim Reaper mode at the prospect of Boris taking us out of the EU without a ‘deal’.

Even so, the CBI was forced to admit that other European countries were less well prepared than Britain for that increasingly likely eventuality.

Given that this corporatist, fanatically pro-EU organisation has been spectacularly wrong on just about everything I can remember, this was a rare confession that our so-called European ‘partners’ have just as much, if not more, to lose than we do. 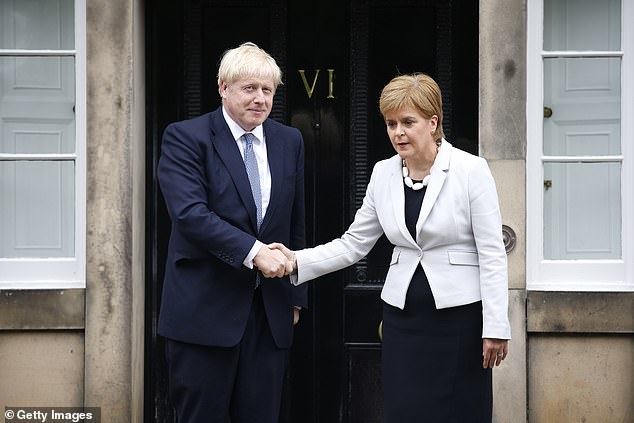 As part of Boris’s ‘love bomb’ to Britain, he intends to turn on the spending taps, splashing out on everything from high-speed rail to social care and schools. Correct me if I’m wrong, but I always thought the Guardian was in favour of more public spending. Mr Johnson is pictured at Bute House, Edinburgh, with First Minister Nicola Sturgeon yesterday

The World At Sixes And Sevens then wheeled on the pro-Remain Labour MP for Ellesmere Port, where 58 per cent of his constituents voted Leave.

Prime Minister Johnson wasn’t just the nemesis of Vauxhall, he wailed, he was going to close down British manufacturing industry entirely. Don’t these people ever take a day off?

As Boris embarks on his summer of sorcery, his natural enemies are cranking up their opposition to a No Deal departure.

Hilariously, the Guardian warned yesterday of an impending ‘No Deal Brexit Emergency’, which would leave public spending plans ‘in tatters’.

Hang on a minute. As part of Boris’s ‘love bomb’ to Britain, he intends to turn on the spending taps, splashing out on everything from high-speed rail to social care and schools.

Correct me if I’m wrong, but I always thought the Guardian was in favour of more public spending. Apparently not, if it’s promoted by a pro-Brexit Tory PM. (Mind you, ‘emergency’ is the Left’s favourite new word. See also ‘climate emergency’, what we used to call summer.)

The Grauniad furthermore quoted some quango I’ve never heard of accusing Boris of planning to destroy the Union.

They obviously hadn’t noticed that Johnson was in Scotland yesterday, sucking up to Wee Burney and Ruth Davidson, and is making whistle-stop visits to Wales and Northern Ireland.

He’s also going to bombard every home in Britain with a leaflet spelling out the benefits of Brexit — in stark contrast to the defeatist drivel churned out by the Vichy government presided over for three dismal years by Mother Theresa and Spread Fear Phil.

Maybe he could revive the spirit of World War II and send a refurbished fleet of Lancaster bombers to drop the leaflets from 25,000ft — rather as the RAF did over Germany before hostilities turned seriously grumpy. That would probably appeal to Boris’s Churchillian sense of destiny.

Actually, yesterday’s World At One managed to draw not a World War II but a Cold War analogy between a Boris Brexit and a nuclear winter.

An author who writes about the advertising industry explained that the leaflets the new Government would be sending out may be reminiscent of the Cold War ‘protect and survive’ propaganda, giving advice on what to do in the event of a nuclear holocaust. Everybody hide!

I’m assuming this was tongue in cheek, but with Project Fear you never know. Elsewhere yesterday, it threw up a prediction that every farmer in Britain would go bankrupt if a No Deal Brexit goes ahead — despite assurances to the contrary from Michael Gove.

At this rate, it’s a small step from agricultural Armageddon and manufacturing devastation to nuclear annihilation.

And on that bombshell, as Clarkson likes to say, enough Brexit already. Maybe a honeymoon period isn’t such a bad thing after all. 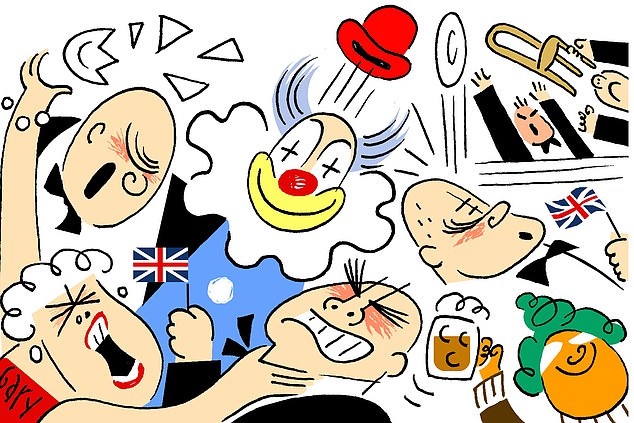 Fighting erupted when passengers wearing black tie and waving Union flags squared up to a man dressed as a clown. (Incidentally, who packs a clown suit for a booze cruise round the fjords?)

One of the consistent themes of this column is that no good ever comes of fancy dress.

How many times over the years have I brought you news of fights between everyone from superheroes and Elvis impersonators to Where’s Wally wannabes?

More often than not, Oompa Loompas are involved. Mostly these mass brawls happen at railway stations, at comic book conventions and at chucking out time on provincial High Streets.

But never before at sea. Still, it was no surprise to learn violence had broken out on an all-you-can-drink cruise ship off the coast of Norway.

Fighting erupted when passengers wearing black tie and waving Union flags squared up to a man dressed as a clown. (Incidentally, who packs a clown suit for a booze cruise round the fjords?)

A huge fight ensued. Furniture and plates were used as weapons and there was ‘blood everywhere’, according to eye-witnesses.

It was reported that ‘large amounts of alcohol had been taken’. Surely not.

Bring on the Oompa Loompas!

Like many of you, I basked in the nostalgic glow of the pictures of eggs frying on the pavement during the heatwave.

These were a Fleet Street stock in trade when I was a paperboy, more than 50 years ago. Of course, that was before global warming had been invented.

Labour’s disgusting, patronising condemnation of the Conservatives’ ‘Uncle Tom’ tendency in the new Cabinet is nothing new.

The Left have always thought that they should own the votes and loyalty of black and minority ethnic citizens (BAME) — not just here, but the United States, too.

Welfare programmes and social housing are designed deliberately to keep people in their place, beholden to their benevolent betters.

Randy Newman nailed it as long ago as 1974 in his biting satirical song Rednecks, which you’ll never hear on the radio because of its repeated use of the unsavoury n-word. 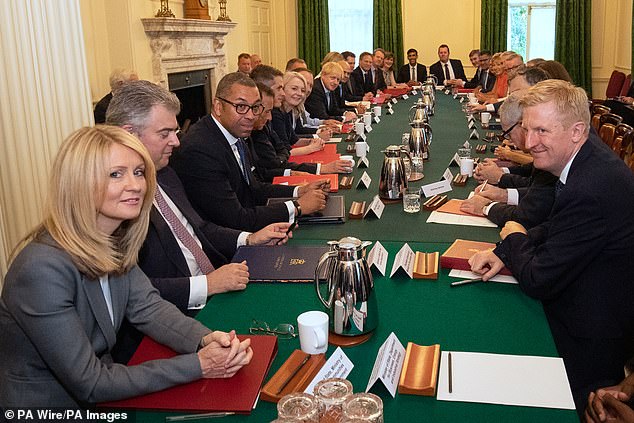 Labour’s disgusting, patronising condemnation of the Conservatives’ ‘Uncle Tom’ tendency in the new Cabinet is nothing new. Boris Johnson’s new Cabinet is pictured above

It centred on Northern ‘liberals’ sneering at racist Southerners and boasting about how they had freed African Americans from their slavery chains.

That’s how the Labour Left think of black and ethnic minority citizens in Britain.

They despise as traitors anyone of immigrant heritage who would ever vote Tory, let alone serve in a Conservative government. They’re as racist in their own way as any Redneck.

Plans to recruit 20,000 extra coppers may be scuppered by the fact there aren’t enough police stations to go round these days.

Modern Plod need large lockers to store all their fancy equipment. Space is in short supply.

We’ve come a long way from the days when all a detective needed was a shooter, half a bottle of scotch and a bacon banjo from the canteen.

Or as Jack Regan, in The Sweeney, instructed his new driver: ‘I want the glove compartment filled with Mars bars, Wine Gums and Jelly Babies, and ham sandwiches, the sort that come in cellophane packets, and sausage rolls — but no potato crisps, they interfere with transmission.’