So now we know. Yuman rites is more important than democracy. The verdict has been handed down by no less an authority than Baroness Shami Chakrabarti, the Corbyn stooge elevated to the Lords as a reward for absolving Labour of anti-Semitism.

Her pronouncement came with an ultimatum that Northern Ireland should immediately follow the Republic in legalising abortion — despite the duly elected Assembly in Belfast voting the opposite way as recently as February 2016.

She insisted Theresa May, as a ‘self-identifying feminist’, should take advantage of the current power vacuum in Ulster to impose abortion rights in the Province. When interviewer John Humphrys pointed out the inconvenient truth that no party in Northern Ireland had stood for election on a manifesto which proposed legalisation of abortion on demand, Shameless became indignant.

‘You can’t have democracy without fundamental human rights,’ she insisted, in the authentic, hectoring voice of one who ‘self-identifies’ as a ‘liberal’.

She doesn’t even want to grant the people of Northern Ireland a say in the matter by holding a referendum, as they did south of the border. Nope, the law must be consistent across the ‘island of Ireland’. Why? Because Shami says so, that’s why.

Never mind the fact that Northern Ireland is part of the United Kingdom and abortion is a devolved power.

The whole point of devolution, which is generally supported by self-identifying liberals, is that laws can be varied to suit the purposes of the people and legislatures of the kingdom’s component parts. But not, obviously, if they contradict the prevailing wisdom of the liberal ‘elite’. 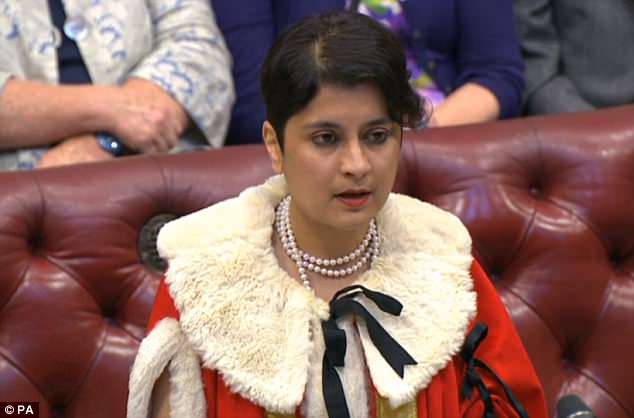 So now we know. Yuman rites is more important than democracy. The verdict has been handed down by no less an authority than Baroness Shami Chakrabarti, the Corbyn stooge elevated to the Lords as a reward for absolving Labour of anti-Semitism

Shami, who no one has ever voted for, doesn’t want a referendum in Northern Ireland because there may still be a majority of people who are likely to vote against full legalisation.

OK, so the people of the Irish Republic voted overwhelmingly in favour of abortion. But you can’t rely on those backward bigots north of the border to do the right thing. They’re even propping up the ghastly Tories, denying Jeremy his rightful place in Downing Street. Best not to ask them in the first place.

That’s the problem with referendums. Sometimes they deliver the ‘wrong’ result. Just look at what happened over Brexit. The likes of Shameless Chakrabarti are all in favour of referendums when the outcome reinforces their own prejudices. Less so, however, when the great unwashed display a little unwelcome independence.

Thus, the vote to leave the EU must be overturned at all costs. So, too, the vote against Scottish independence. That hasn’t stopped Wee Burney wheeling out over the weekend yet another plan to break away from the UK.

But the result of the abortion referendum in the Irish Republic has been hailed as an historic triumph for democracy by many of the same people who were appalled when the Irish electorate voted against the EU’s Lisbon Treaty in 2008. On that occasion, the Irish were condemned as thick, racist bog-trotters and were forced to vote again so they could produce the ‘right’ answer.

That’s now the favoured tactic of Remoaners here, if they can’t stop Brexit by parliamentary means.

For the record, I support abortion rights and approve of relaxing the law in Northern Ireland. But I appreciate it is an emotive subject, with strong beliefs on both sides.

Newcastle is building a giant ferris wheel, bigger than the London Eye. Inevitably, it has already been nicknamed by Geordies ‘The Why Aye’.

They can do better than that. How about paying tribute to the Likely Lads and calling it ‘Bob Ferris’.

So while the Irish referendum result is welcome, I found the near hysterical reaction to it pretty nauseating — as have been the attempts by British politicians to capitalise upon it to further their own agenda, whether that involves trying to embarrass Theresa May or battering the people of Northern Ireland.

The posturing, pipsqueak Irish Prime Minister was close to tears. Supporters of the legalisation campaign were ecstatic, cheering and hugging, waving their banners. It was more like VE Day than the announcement of a decision on such a sombre subject as terminating pregnancy.

Wherever you stand in the debate, there’s no dispute that abortion involves ending a human life, even in embryo, and deserves to be treated with the utmost dignity. But this was politics for the Twittersnapgram generation. Everybody had to be in the movie. Look at me, me, me!

It reminded me most of the day Michael Jackson died, when dozens of dopey birds and some of the more flamboyant Friends of Dorothy turned up outside the HMV store in Oxford Street and started dancing in the street, singing along to a selection of Wacko Jacko’s greatest hits.

Half of them didn’t even know the words. Bobby Jean, you’re not my mum! But that was beside the point. They had to be there, emoting, and being seen to emote.

As for media tart Shami, I suppose it was inevitable she’d find some way of getting in on the abortion act. Funny, though, I don’t remember her getting quite so animated when a bakery in Northern Ireland was prosecuted not so long ago for refusing to bake a cake with a slogan supporting gay marriage because it was contrary to their religion.

Surely that, too, in a proper democracy should be a question of individual choice, even if you disagreed with the bakers’ decision. Why should anyone be forced to bake a cake promoting something which is against their beliefs?

That’s the problem with self-identifying liberals. As Baroness Shameless has now made perfectly plain, their idea of democracy means the rest of us doing what they say, regardless of what we might believe.

Their concept of universal yuman rites doesn’t apply to anyone or anything of which they disapprove. And they only respect the results of referendums that go their way.

Britain celebrated the Bank Holiday in traditional style, by raiding the dressing-up box and/or getting completely bladdered.

This column has a great fondness for fancy dress follies, so I was particularly drawn to the photo of a man dressed as an Oompa Loompa, puffing on a cigarette while making his way home from a good night out in Birmingham.

The weekend also saw the annual Comic Con convention in London, featuring grown men and women togged up as cartoon characters and superheroes.

Years ago, men visiting the seaside on Bank Holidays would wear nothing more elaborate than a knotted hanky. Nowadays, you can’t move for Spider-Men and assorted Star Wars lookalikes.

Occasionally, this good clean fun spills over into violence and other inappropriate behaviour, especially after drink has been taken. 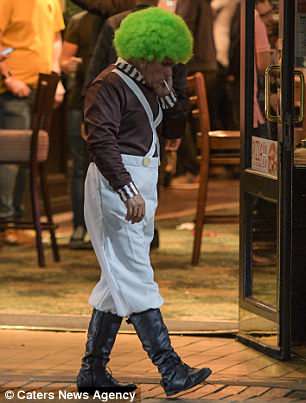 This column has a great fondness for fancy dress follies, so I was drawn to the photo of a man dressed as an Oompa Loompa

Over the years I’ve brought you news of a brawl at a Doctor Who convention and a man dressed as Tigger discovered having sex in a public toilet with a woman in a leprechaun outfit.

For some reason, these punch-ups often involve men dressed as Elvis. Last week in Poole, Dorset, police were called to an incident at a concert given by an Elvis impersonator. Four people were arrested.

Apparently, Elvis fans clashed with theatregoers who had been attending a production of Thoroughly Modern Millie, based on the movie set in the Twenties and starring Julie Andrews.

Just as well they weren’t in costume, too. I have visions of tipsy flappers delivering Charleston-style kicks, leaving the Elvis contingent with Black Bottoms.

Bring on the Oompa Loompas!

I suppose it was only a matter of time. The Church of England, always eager to hurl itself under any passing bandwagon, is appealing for transgender people to train as vicars. Bishops in the Lichfield diocese are writing to clergy claiming that recruiting trans priests will encourage more young people to join their congregations. Where did they get that idea? Still, it ticks the diversity box and will help solve the shortage of women vicars. If they don’t get enough applications from transgender people, no problem.

A man recently applied to the Labour Party to become a women’s officer by claiming that he identified as a woman, but only on Wednesdays. The C of E could always ask its existing male vicars to identify as female every other Sunday.