Richard Wilkins’ most cringe-worthy moments on the Today show

It was revealed on Friday that Richard ‘Dickie’ Wilkins is being demoted from his role at the Today show, replaced by Triple J newsreader Brooke Boney.

After almost 25 years in the role of entertainment reporter at the Nine Network, the 64-year-old has certainly had his fair share of memorable moments.

And some of them are a lot more cringe-worthy than others – such as the time he wrongly reported that actor Jeff Goldblum had fallen off a cliff, or his embarrassing feud with pop star Dua Lipa.

Wrongly reporting that Jeff Goldblum fell off a cliff, storming off set after his hair was compared to a Stegosaurus, calling Fifty Shades of Grey a ‘family film’ and a feud with Dua Lipa: Richard Wilkins’ most cringe-worthy moments on the Today show

Unfortunately for the TV host, his shockers and faux pas have been seen by millions of viewers.

Here are some of the veteran entertainer’s most cringe-worthy moments on the Today show.

The day Richard announced that actor Jeff Goldblum was dead

Back in 2009, Richard Wilkins falsely reported Hollywood actor Jeff Goldblum died rather dramatically – after falling from off cliff in New Zealand.

Richard reported that New Zealand police ‘were saying Jeff Goldblum fell from a cliff to his death while filming in New Zealand’.

The 2009 ‘death’ report was actually a prank being circulated online in the immediate aftermath of pop singer Michael Jackson’s death.

‘In the middle of that (Jackson’s death) suddenly there’s all this stuff about Jeff Goldblum coming up,’ he explained to Mumbrella two years later. 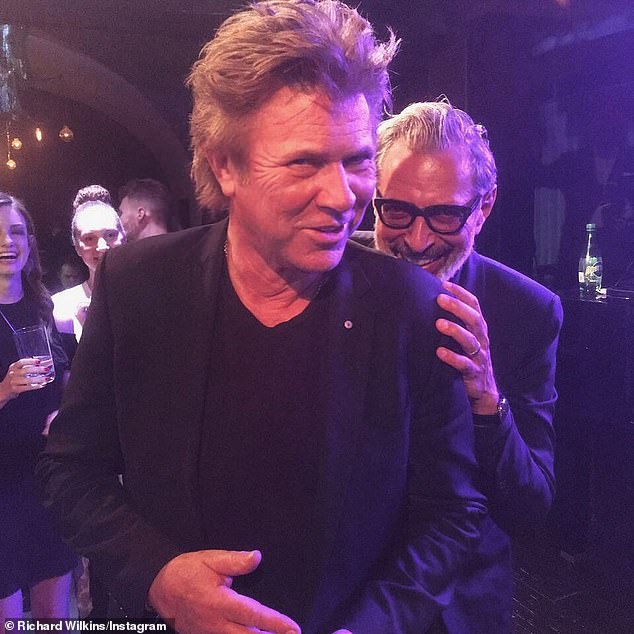 Still here! Back in 2009, Richard falsely reported Hollywood actor Jeff Goldblum (pictured) died rather dramatically – after falling from off cliff in New Zealand

In 2016, the actor granted Richard an interview and laughed the incident off.

Richard began: ‘Sir, it’s great to have you in the country, lovely to see you back on your feet,’ before adding: ‘Er, sorry about that!’

Jeff replied: ‘Think nothing of it, totally understandable. Could happen to the best of them – which you are’, prompting Richard and co-hosts Karl Stefanovic and Lisa Wilkinson to burst into laughter.

In March, UK singer Dua Lipa was forced to cancel her support slots at a series of Bruno Mars concerts in Australia.

Having a bit of a rant on the Today show, Richard wrongly claimed that Dua Lipa had appeared on Jimmy Kimmel’s talk show in LA despite having cancelled her Bruno Mars concerts, when in fact she was on bed rest.

Richard had told Today viewers: ‘She was supposed to be here in Australia opening up for Bruno Mars on his 24K Magic World Tour.’

‘But Dua Lipa cancelled her appearances last weekend and this one as a result of having to have immediate surgery to have her wisdom teeth removed.’ 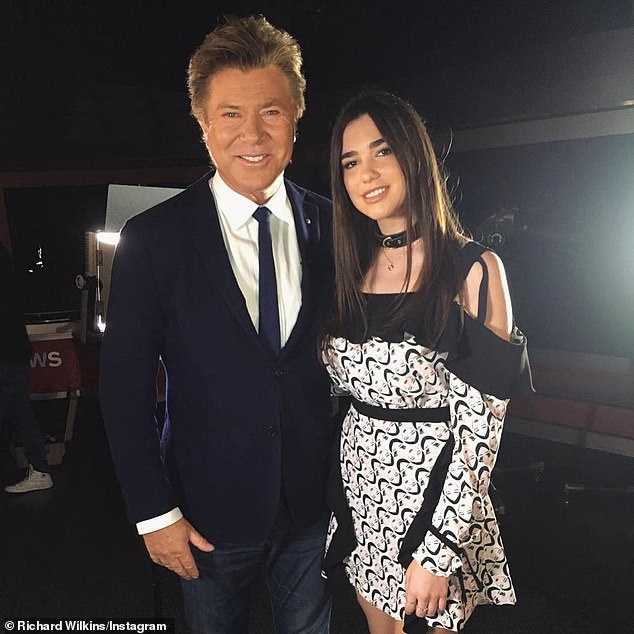 Nope: Richard wrongly claimed that Dua Lipa (right) had appeared on Jimmy Kimmel’s talk show in LA despite having cancelled her Bruno Mars concerts. She was on bed rest

‘But get this, here she is last night on Jimmy Kimmel Live!’

The British singer blasted Richard on Twitter at the time for poor journalism.

Alongside a photo of herself lying in bed looking unwell, she tweeted: ‘Richard Wilkins if you were a good journalist you would’ve done proper research instead of talking out of your a*s.

‘Jimmy Kimmel was shot in Feb in LA and aired yesterday. I’ve been in Australia on bed rest and wouldn’t (have) cancelled by Bruno shows if I didn’t have to.’

Richard later offered his apologies, writing on Twitter: ‘Sincere apologies, Dua Lipa. Didn’t mean to misinform. Assumed you were live with Jimmy K. Your fans and my son have severely castigated me!’

Last January, Richard stormed off the Today show last year after his signature bouffant hairstyle was mercilessly mocked by his co-stars.

Richard walked off set and did not return for an hour after newsreader Sylvia Jeffreys poked fun of his hair, comparing it to a ‘Stegosaurus’.

Months earlier, Karl Stefanovic had compared Richard’s thick mane to that of a nine-week-old baby who had recently gone viral on social media. 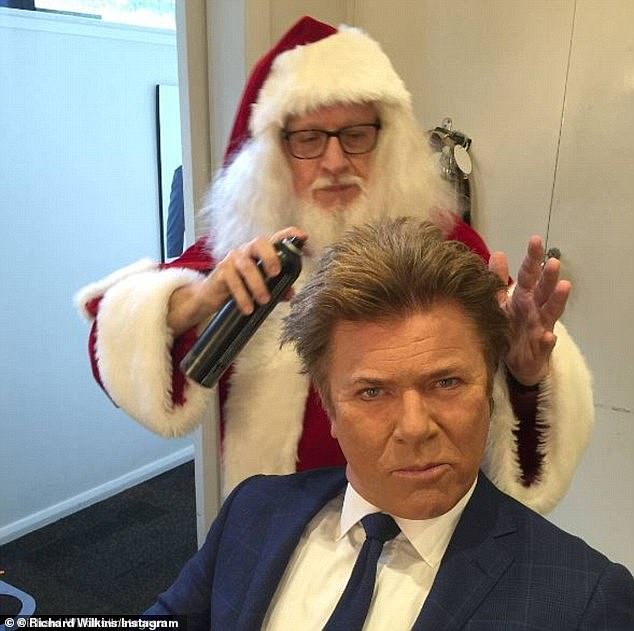 Coif crack up: Last January, Richard stormed off the Today show last year after his signature bouffant hairstyle was mercilessly mocked by his co-stars

The awkward moment began after the show played a viral video of a toddler yelling at an apparent T-Rex visible off screen.

‘Oh Sylvia,’ Richard responded, looking unimpressed that his bouffant hairdo had been brought into the story.

But Sylvia didn’t stop there, launching into a description of Richard’s bouffant mane complete with hand gestures: ‘Well it is the T-Rex- oh no that’s the other one – the stegosaurus.’ 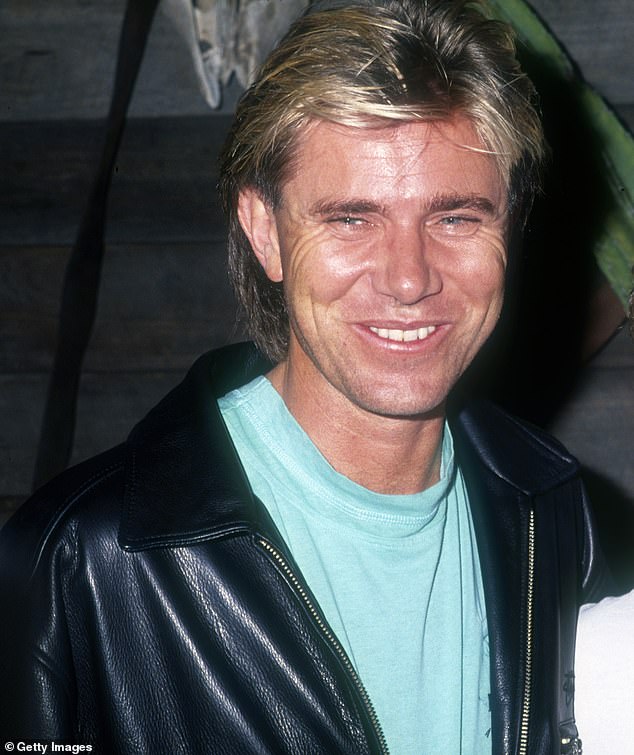 Known for his do since way back when! Richard walked off set and did not return for an hour after newsreader Sylvia Jeffreys poked fun of his hair, comparing it to a ‘stegosaurus’. Pictured in the 1990s with his famous mane

‘Are you saying Dickie is a dinosaur?’ Co-host Tim Gibert asked Sylvia, who added: ‘I’m saying he has got magnificent hair.’

However Dickie was having none of the jokes at his hair’s expense, throwing his hands up in the air.

‘That’s it!’ He said, standing up from his chair and jokingly walking off set.

‘Dickie we love you your hair is magnificent,’ Sylvia called to the celebrity guru as he made his way past cameramen.

‘Thank you Sylvia yours too,’ a deflated-sounding Richard replied off camera, but he did not return to the set for some time.

When he accidentally referred to singer Aloe Blacc as ‘Aloe Vera’

During an interview with American singer Aloe Blacc in 2014, Richard accidentally called him by the name of a plant.

As he chats with the singer, Richard first introduces the I Need A Dollar hitmaker by his correct name.

But after chatting for a few minutes, the presenter accidentally goes on to call him Aloe Vera, which is the name of a succulent plant rather than the chart-topping performer. 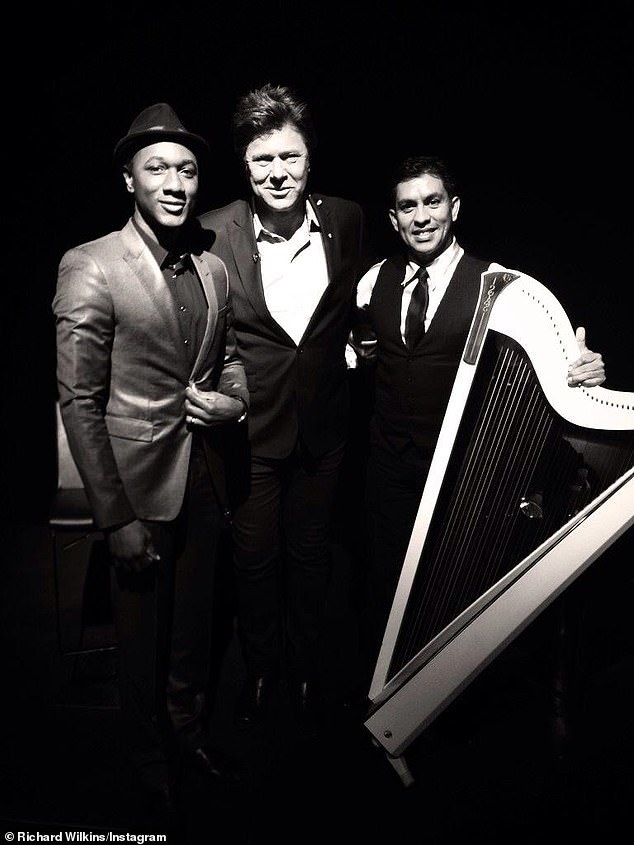 Not his name: Afer chatting for a few minutes, the presenter accidentally goes on to call him Aloe Vera, which is the name of a succulent plant rather than the chart-topping performer

After the blunder he quickly covered his tracks, embarrassingly saying: ‘Aloe Blacc, I can’t believe I did that, sorry.’

Richard took to Twitter later in the day to poke fun at the incident, uploading a picture with the singer and his harpist.

That time he called Fifty Shades of Grey a family film

But the entertainment reporter awkwardly claimed the new Fifty Shades Darker film was ‘fun for the whole family’ during a segment aired in 2017.

The presenter’s comment on came as a shock to his co-hosts, who laughed and shook their head in disagreement. 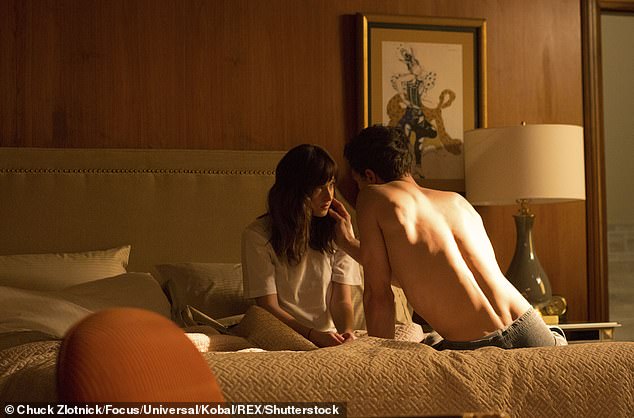 Maybe not for kids: The entertainment reporter awkwardly claimed the new Fifty Shades Darker film was ‘fun for the whole family’ during a segment aired in 2017

The ‘joke’ came after Dickie played an exclusive behind-the-scenes interview from the film’s lead stars Dakota Johnson and Jamie Dornan.

His ‘fun for the whole family’ comment rolled off the tongue as he began talking about his next entertainment story.

However, he was abruptly cut off by co-host Lisa Wilkinson’s loud outburst within seconds: ‘No it isn’t! No it isn’t!’

The reporter appeared red-faced as he raised his arms to defensively confess: ‘That was a joke.’ 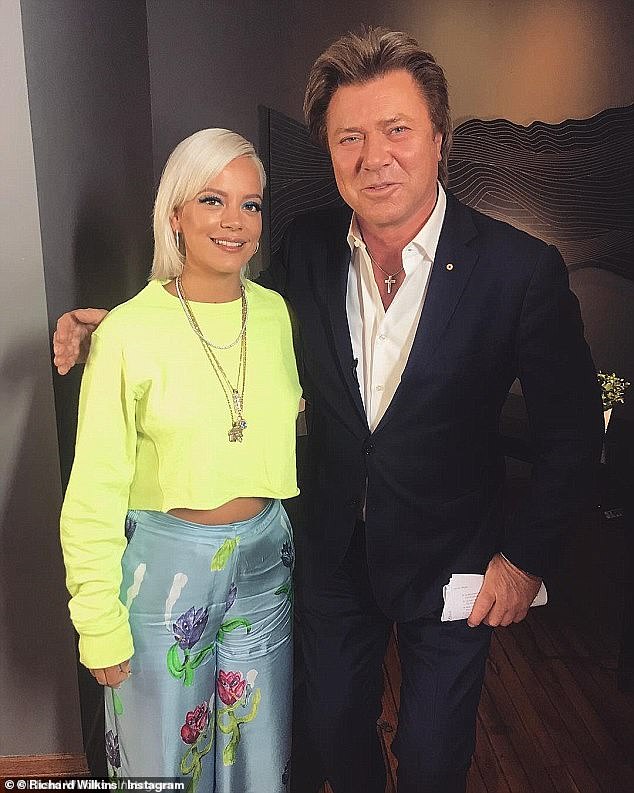 Jazz hands: In September, Richard sent fans into a frenzy after he posed in a rather awkward picture with Lily Allen (left) following their sit-down interview

In September, Richard  sent fans into a frenzy after he posed in a rather awkward picture with Lily Allen following their sit-down interview.

The Channel Nine personality shared a photograph of him engaging in a contactless embrace with the 33-year-old songstress on Instagram.

In the image, Richard is seen hovering his hand above the British singer’s shoulder, prompting fans to point out the strange move.

‘Nice hover hand!’ one fan remarked in jest while another added: ‘That hover hand isn’t creepy AT ALL RW (right now)!’

Richard gave no explanation for the odd pose with the British indie pop star. 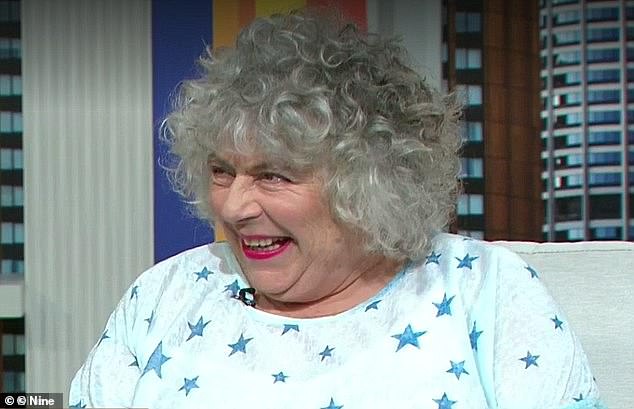 Harry Potter actress Miriam Margolyes (pictured) told Richard during an awkward interview: ‘You mellowed and you’re not just interested in you’

Last year, Richard had a rather awkward encounter during an interview with Harry Potter actress Miriam Margolyes.

After the film star revealed she never used to like him, the Today reporter quipped: ‘That’s all we have time for!’

Before calming down enough to let the hilarious guest tell him what she really thought.

The hilarious interview took a turn after Miriam, 75, responded curiously to Richard complimenting her voice. 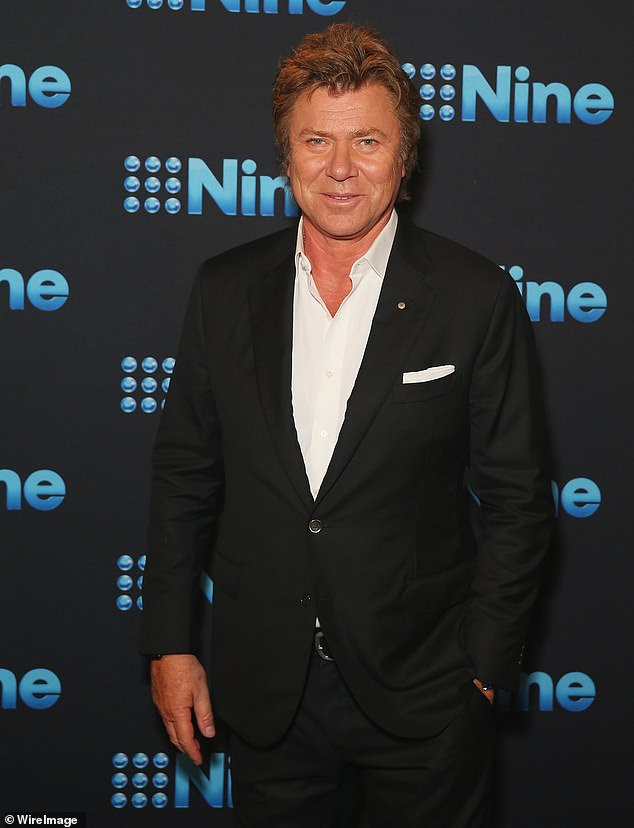 ‘I like your voice, actually. I like you better now than I used to,’ she began her assessment.

‘You mellowed and you’re not just interested in you,’ she said in a tone that implied that she didn’t believe this was always the case.

Once again the co-hosts exploded into laughter as Richard stared at camera with a wry smile.

‘You’ve improved. You honestly have,’ she also stated.

Keeping his cool, Richard replied: ‘Well I always adored you, so there we go,’ before his cast mates chose to change the subject. 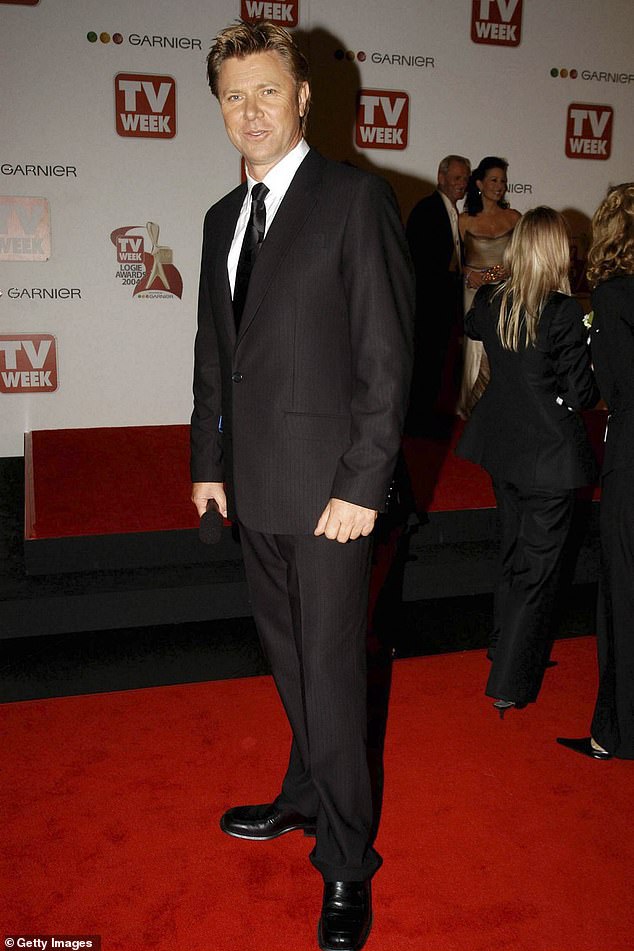 Stalwart: Richard spent almost 25 years in the role of entertainment reporter at the Nine Network. Pictured in 2004