‘There’s so much emotion that you end up forgetting’: Richarlison forgets his own great-grandmother’s name after scoring in Copa America final

By Tom Sanderson For Mailonline

Everton forward Richarlison sent 200 million of his fellow countrymen into hysterics through a post-match interview recorded after his Copa America-sealing goal on Sunday evening.

The scorer of his side’s third goal in a 3-1 victory over Peru at the Maracana, the 22-year-old was naturally in high spirits after sealing a ninth continental title with his penalty.

So high, in fact, that he forgot his own great-grandmother’s name when dedicating the strike to her. 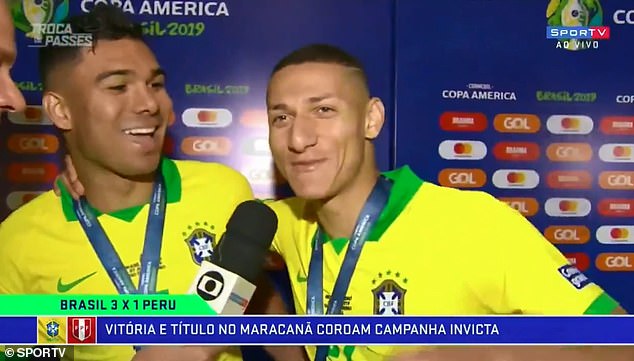 For the £50m pound man, the Premier League’s highest scoring Brazilian above the likes of national team-mate Roberto Firmino and West Ham’s Felipe Anderson in 2018-2019, the whole journey began with a viral video of the young star celebrating his call-up at her home.

‘Like I said there at the start, where I celebrated my call-up,’ started Richarlison recalling the event to SporTV, ‘If I scored a goal it would be for my great-grandmother, who’s there [in Espirito Santo] at 80 and a bit years old. I have to thank God and dedicate this goal to her.

‘Now it’s only [a case of] commemorating [the win] with my family who are here at the Maracana, and remembering that my first goal here was right inside that post.’ he added.

‘What do they call your great-grandmother?’ the reporter asked, once Richarlison wished her fortunes would turn round since recently losing her husband.

‘Erm…damn,’ Richarlison struggled, as the interview took a more light-hearted turn. ‘Now I forgot [it].’

‘Richarlison forgot the name of his great-grandmother,’ guffawed the reporter as he gave his subject a friendly clinch on the shoulder. ‘We’ll produce the content and we’ll remember [it for you]’ it was promised.

‘It’s here,’ Richarlison insisted pointing to his head and seeing the funny side. ‘But I’ve ended up forgetting it,’ he admitted.

‘I don’t know. There’s so much emotion that you end up forgetting [these things]. I can’t remember it,’ Richarlison said as the reporter reminded him that ‘what’s important is the affection’. 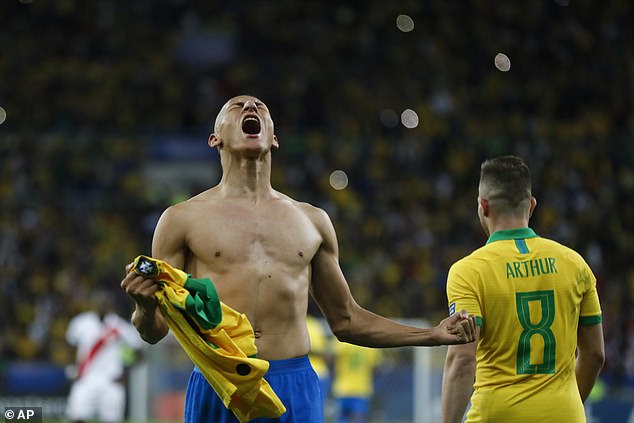 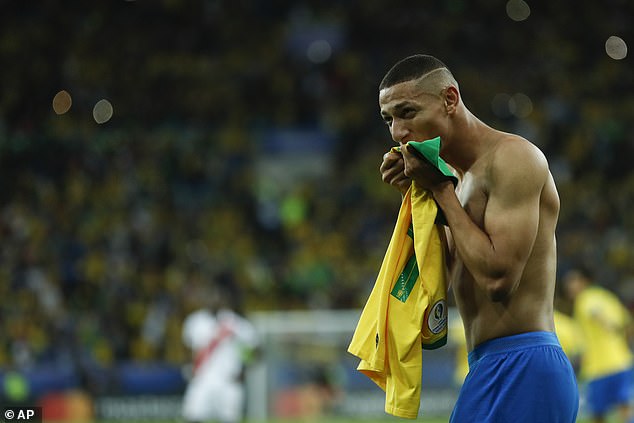 Richarlison agreed and went off on his merry way. Later, though, as Casemiro was conducting his own interview, the memory of his young colleague had been refreshed.

‘How could he forget?’, the question was put to Casemiro. ‘This guy… this guy,’ pointed the four-time Champions League winner, breaking down with laughter.

Helping Brazil land their first piece of major silverware in 12 years, this will only help his compatriots warm further to a break out star, who forced his way into the international fold once former Fluminense cohort Pedro was withdrawn due to a serious injury last September.

Causing similar hysteria when previously explaining that he failed all of his subjects at school including art, despite his uncle being the teacher, Richarlison has likewise captured the hearts of the nation with his charitable actions too.

Returning to the competition from a bout of mumps that almost saw him excluded from the squad on medical grounds, he last month donated around £10,000 to a high school class in Espirito Santo which wished to participate in an Olympics competition in Taiwan.