Richmond and Adelaide fans descend on MCG for grand final

Richmond are celebrating their first premiership appearance in 35 years as they take on the Adelaide Crows in the AFL grand final Saturday.

And loyal fans were out in force across Melbourne early in the day to support their teams, painting their faces and donning bright costumes.

Tigers fans took the charge, wearing giant cat rugs, blow-up masks and stripey tails to show off their pride for their underdog team.

Loyal Richmond fans were out in force across Melbourne on Saturday to support their team in the AFL grand final, painting their faces in the club’s yellow and black colours 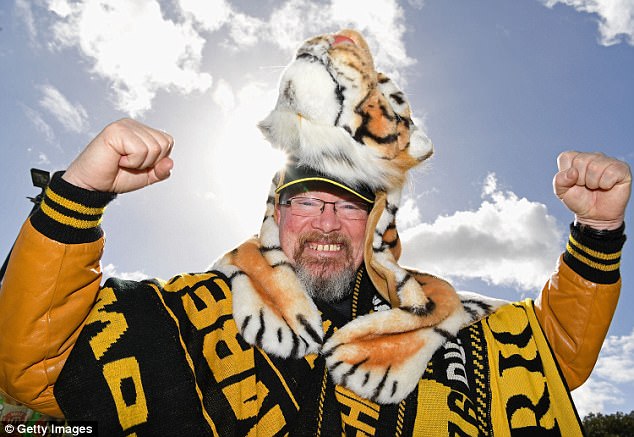 Others donned giant cat rugs (pictured), blow-up masks and stripey tails to show off their pride for the underdog team.

Thousands of enthusiastic fans were pictured descending on the Melbourne Cricket Ground ahead of the game’s 2.30pm bounce-down.

One man was seen getting his face – and long scraggly beard – painted in his team’s colours, thanks to some delicate brushwork.

Other Richmond fans dressed up their AFL jumpers with club badges, while others donned inflatable head pieces or onesies.

Adelaide Crow fans were also seen gathering ahead of the match, decked out in their team’s red, yellow and navy blue colours. 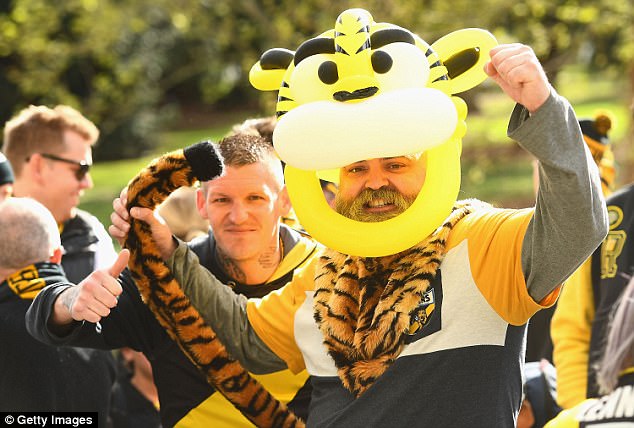 Those waiting to enter the Melbourne Cricket Ground ahead of the game’s 2.30pm bounce-down were greeted by a swarm of enthusiastic fans – some with tails 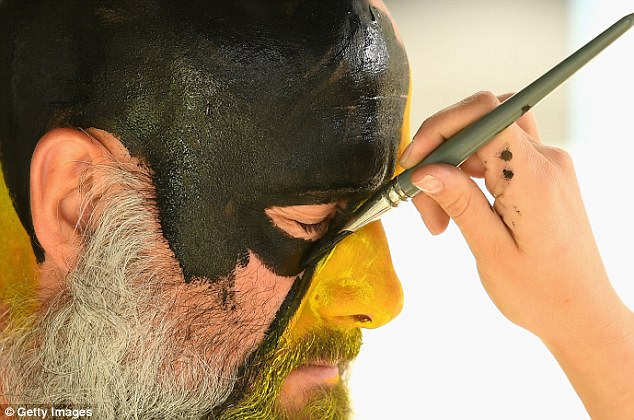 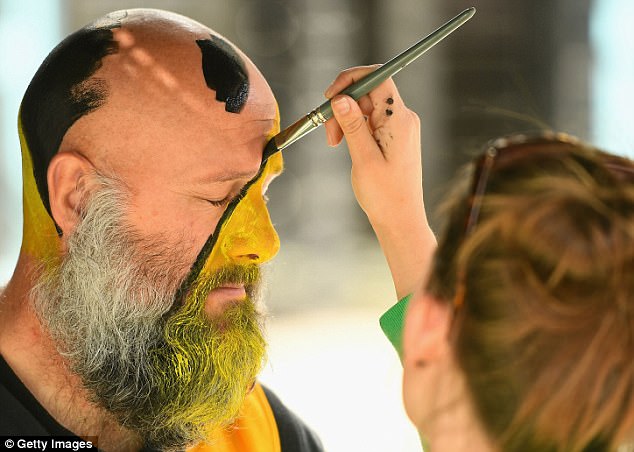 One young fan was pictured getting a piggyback ride atop someone’s shoulders, with other eager supporters using their team scarves to beat the 16 degree chill.

Other desperate fans unlucky enough to secure tickets were seen surrounding the venue with signs, in the hopes of getting a chance to watch their team play.

Tickets from scalpers were being sold online in the week before the match for up to $3,500 each, with nearly 50,000 Tigers members missing out, according to the Herald Sun.

Tickets to the Grand Final often range in price from $150 for standing room up to as much as $410 for premium seating, while corporate packages sell for up to $1,500. 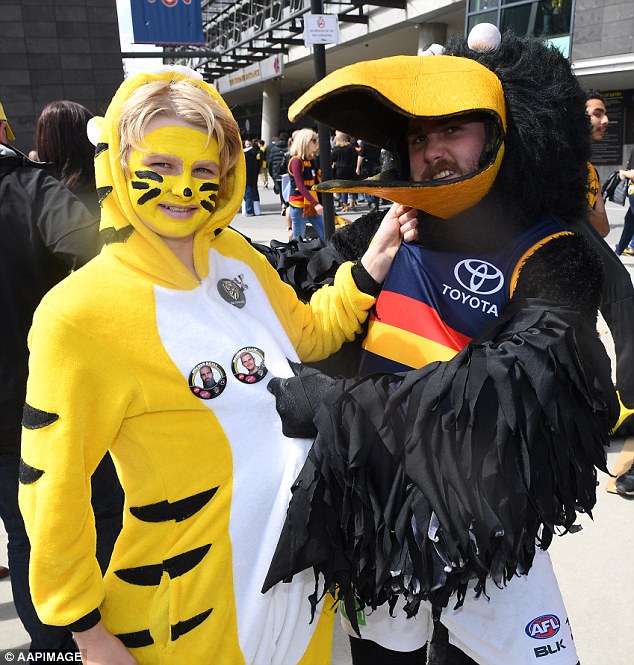 The premiership match is expected to see 100,000 people watch as the Tigers take on the Crows, with the rivalry heating up early outside the stadium 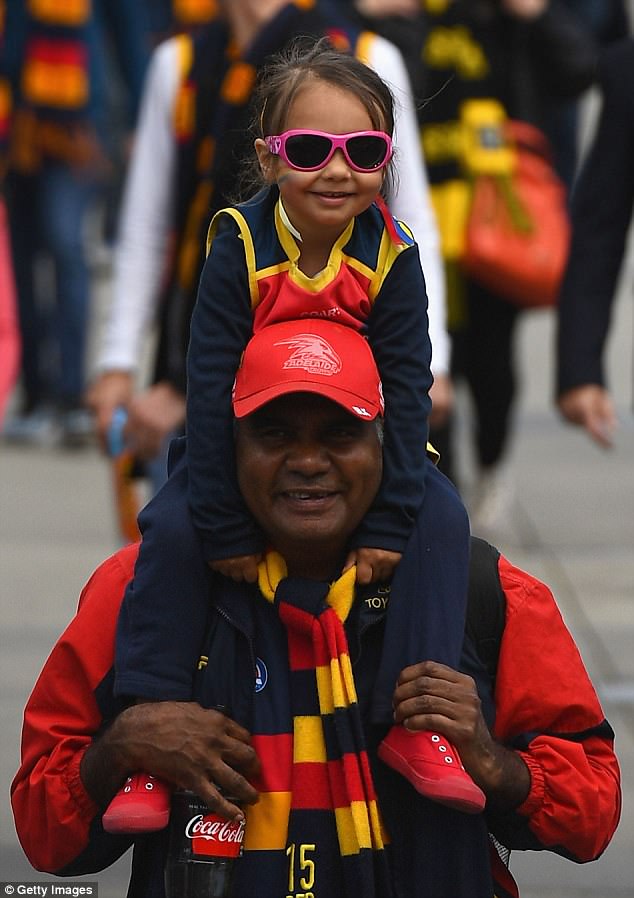 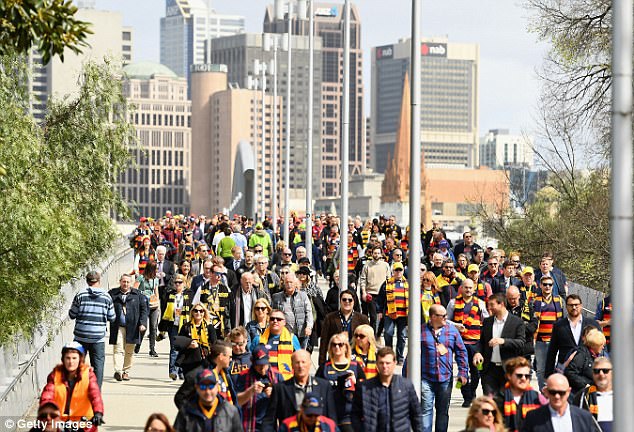 Thousands descending on the MCG  ahead of the game’s 2.30pm bounce-down, with many decked out in team scarves to keep away the 16 degree chill

Before the game begins Las Vegas band The Killers are expected to perform as part of the pre-game entertainment.

Eurovision and X-Factor starlet Dami Im will also be belting out her powerful vocals to the 100,000 strong crowd as she sings the national anthem.

Teams have narrowed down their 22-player sides, with it the first time since AFL premierships began that no players will have prior experience in a grand final game.

While Richmond have the home field advantage, the Adelaide Crows have had a solid season, and won the last three times they have played the Tigers.

The game will mark Adelaide’s first premiership decider since their 1998 bout against North Melbourne.

While Richmond are hoping to deliver for fans, with their last premiership win more than three decades ago. 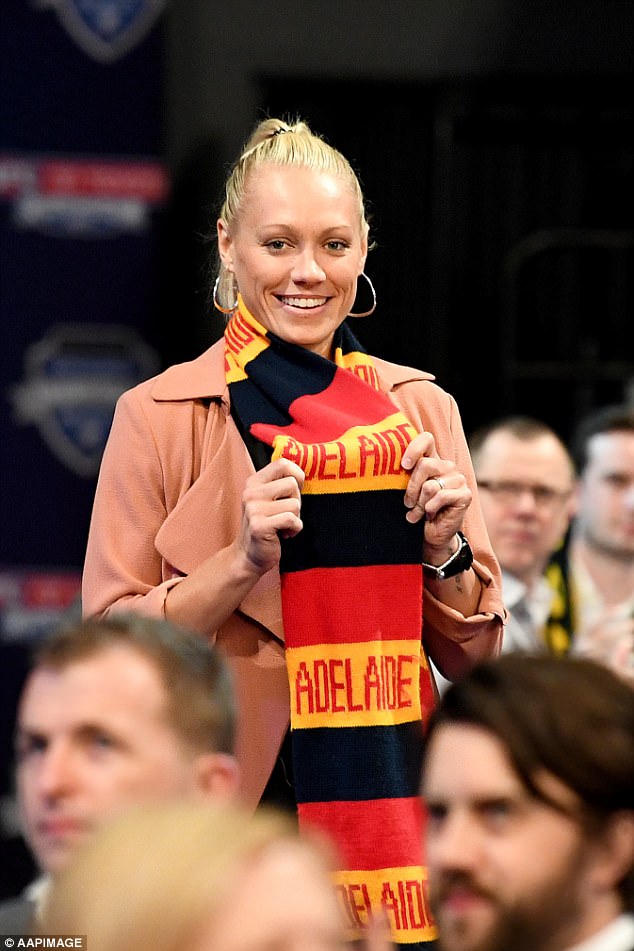 Basketballer Erin Phillips was seen getting in the Adelaide spirit ahead of the bash, donning a club scarf at the North Melbourne Football Club grand final breakfast 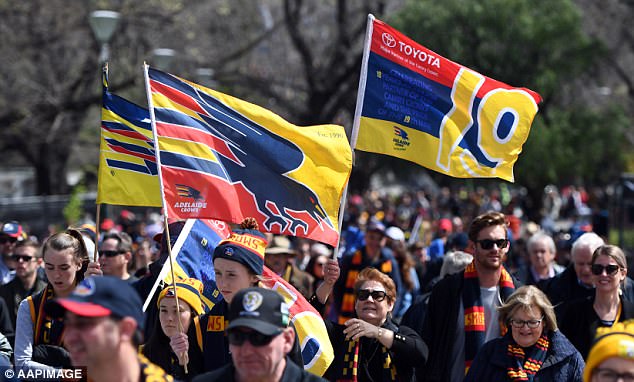 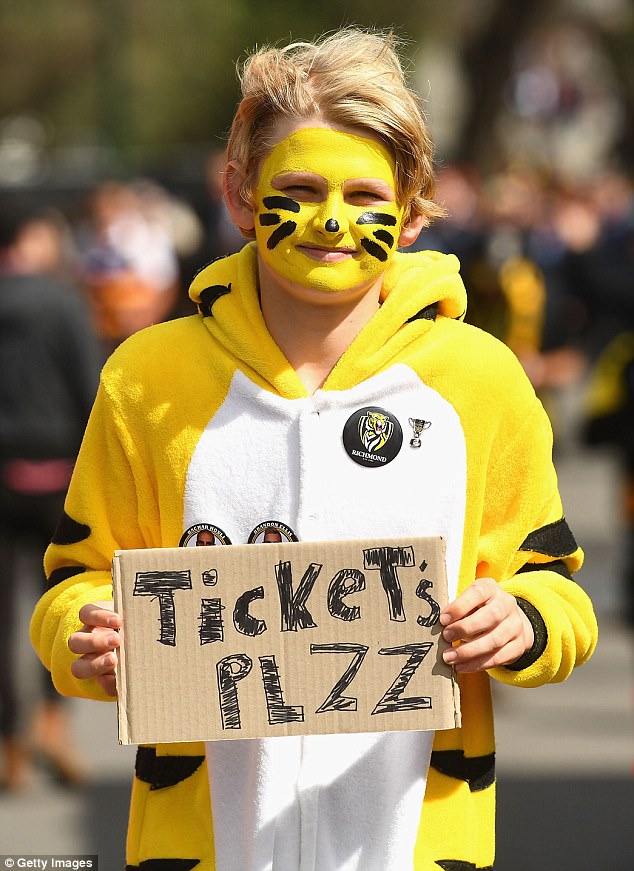