By Dan Cancian For Mailonline and Australian Associated Press

Richmond halfback Rhyan Mansell has been banned for one game after striking Jack Ginnivan in the back of the head twice during the Tigers’ clash against Collingwood on Saturday.

The Tigers youngster came under scrutiny for twice smashing his forearm into the back of the Collingwood forward during Richmond’s 113-86 win at the MCG.

Tempers flared at the end of the third quarter at the MCG on Saturday after Ginnivan kicked a goal to cut the Pies’ deficit to 29 and was niggled by a few Tigers players.

The confrontation escalated shortly afterward, when Ginnivan looked to pick up the ball in traffic only for Mansell to come crashing down on him and hit the Pies young gun with his forearm twice – first when he landed on him, then as both players were on the turf.

No free kick was paid because the incident occurred after the three-quarter time siren.

However, the contact was assessed by the match review officer as intentional conduct, low impact and high contact.

Speaking on Fox Footy, Nick Riewoldt said Mansell’s hit would have resulted in two free kicks had it happened before the siren. 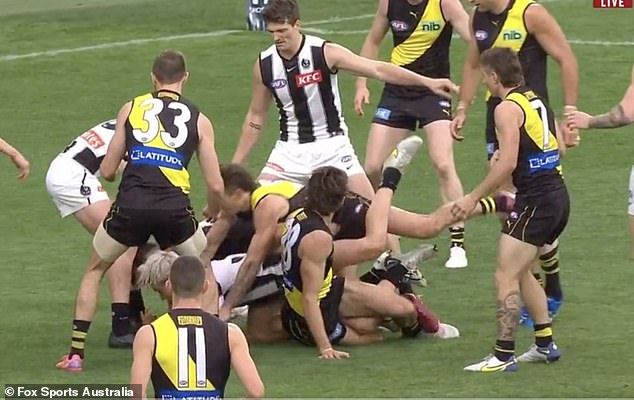 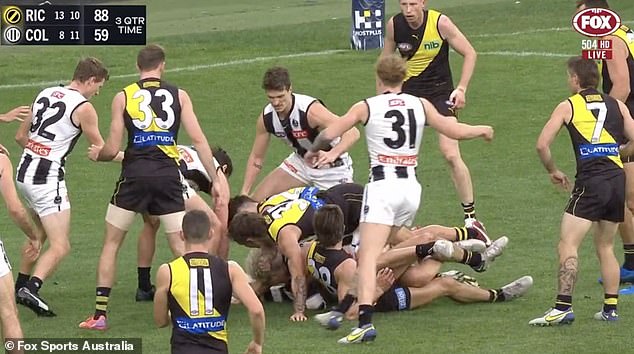 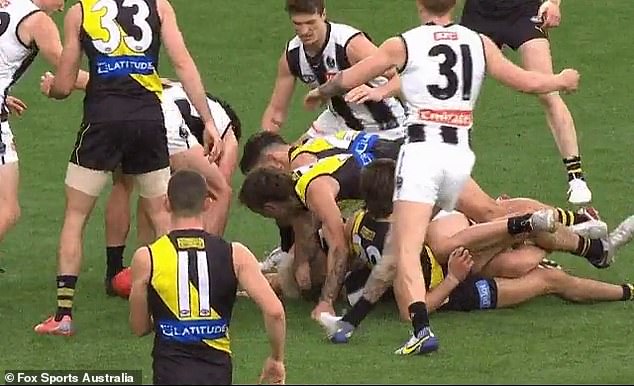 ‘Clearly you would expect if it was in general play Mansell would’ve been done for two free kicks,’ the former St Kilda great said.

‘But because it was after the siren, the umpires were powerless to do anything about it, other than potentially report the player.

‘Mansell comes over the top with the one elbow, goes again a second time – which is pretty poor form.’

Speaking after the game, Richmond coach Damien Hardwick said he had not seen the incident but praised Mansell’s physical approach. 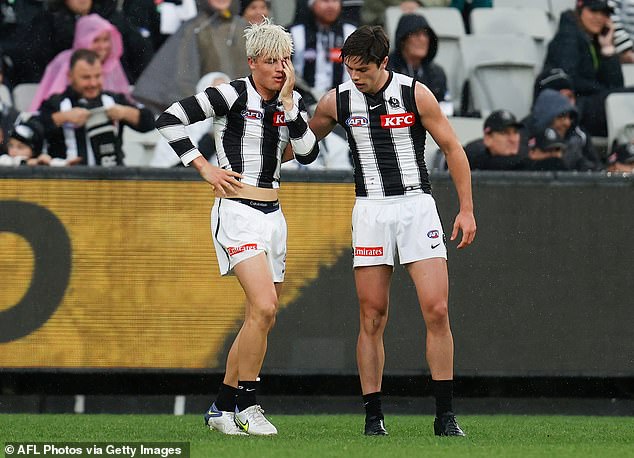 ‘I didn‘t notice it compared to any other player, but we want our small backs to be physical and like most other backs in the AFL they’d be doing exactly the same,’ he said.

His Collingwood counterpart Craig McRae also missed the incident, but admitted he wasn’t surprised to see Ginnivan receiving special treatment for his opponents.

‘I think anybody that‘s been in the competition for a long time realises that when you’re playing good footy someone wants to take that away from you,’ he said.

‘They’ll find a way to find a weakness. I think for Jack it’s just part of his growth, first and second year players get a bit more attention when you start to play well.’

Mansell will now miss Richmond’s Round 9 game against Hawthorn at the MCG on Saturday.