Richmond Tigers have won their second premiership in three years after humiliating the Greater Western Sydney Giants in the 2019 AFL Grand Final.

Dustin Martin spearheaded his side’s dominant victory, with the assistance of debut Marlion Pickett staring in the show.

After a brutal second and third quarter, GWS Giants were able to find some relief with Harry Himmelberg kicking the first goal of the final term.

But the goal did little to stop the Tigers from taking a 83 goal lead to win the premiership. 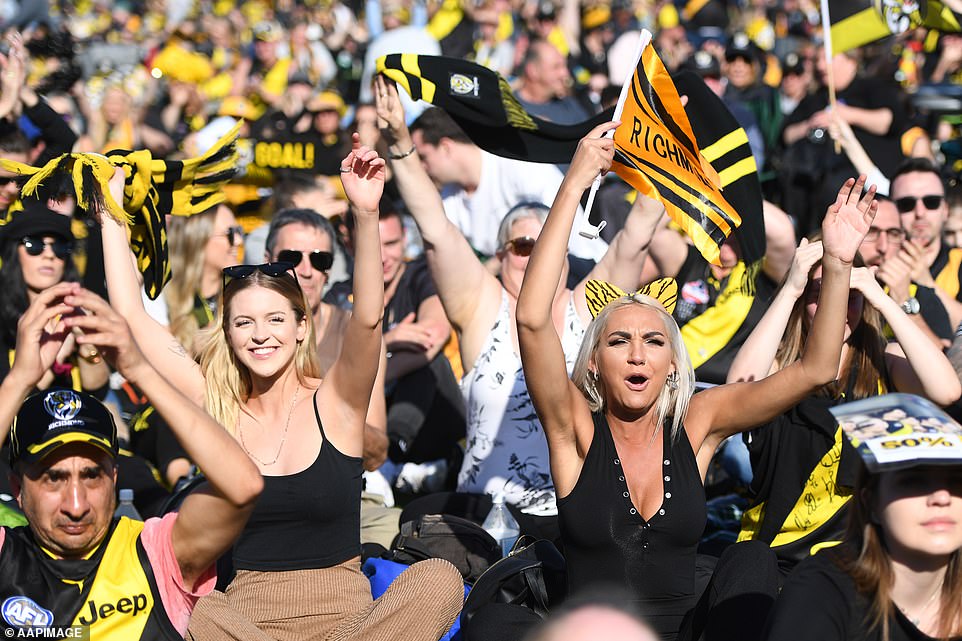 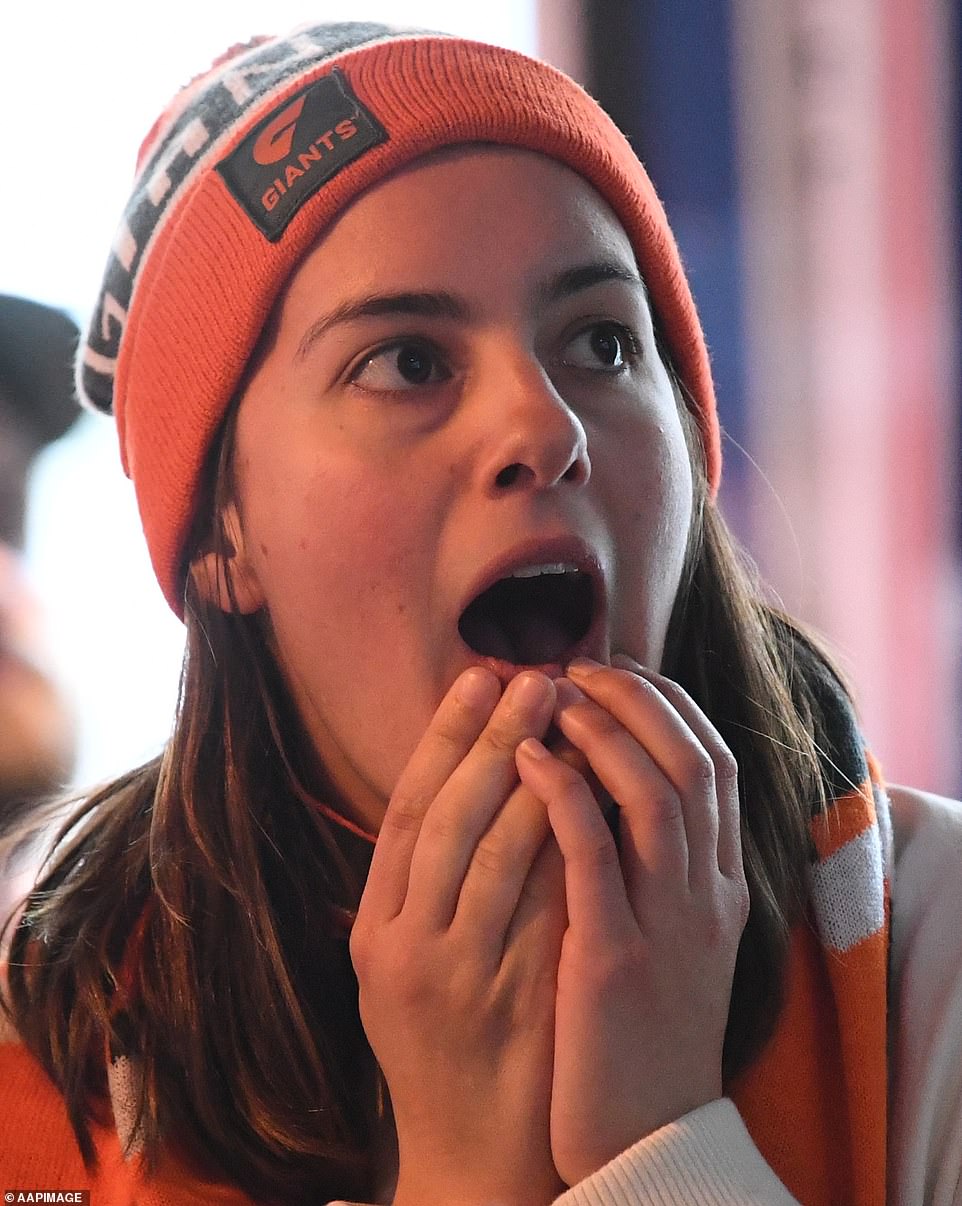 The Tigers scored 11 goals in a row before GWS Giants were able to seek a chance at redemption through Jacob Hopper in the third quarter. The moment was short-lived as Ivan Soldo matched the third-quarter siren with another Tigers goal.

Last minute Tigers recruit Marlion Pickett justified his shock selection for the decider by successfully kicking a goal during the third-quarter scoring frenzy.

The Tigers entered the third quarter with a 35 point lead after dominating the second quarter.

Dustin Martin and Tom Lynch kicked a goal each while teammate Jack Riewoldt scored three to give the Tigers a healthy lead at the break after keeping the Giants goalless in the second quarter.

Pickett, who is the first player to make their AFL debut in the Grand Final for 67 years, showed off his talent with a breathtaking blind turn. 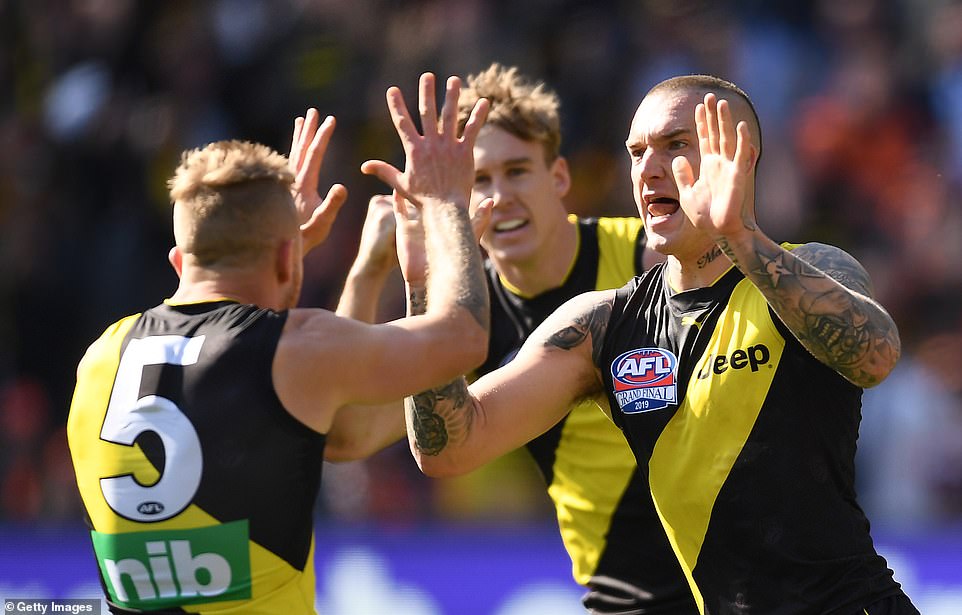 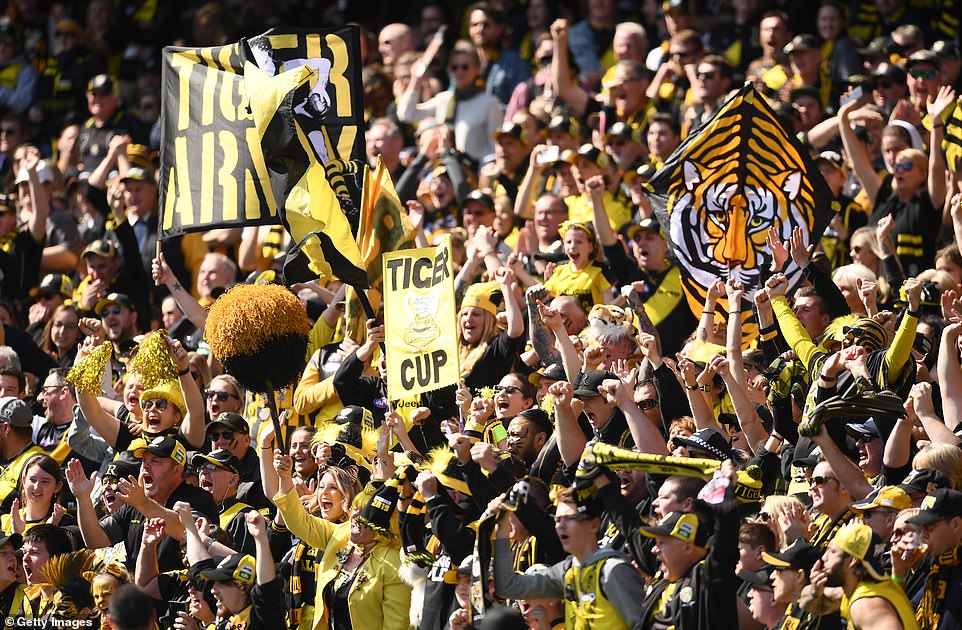 Richmond Tigers show their support for the squad before the game started on Saturday afternoon. The stadium was a sea of yellow 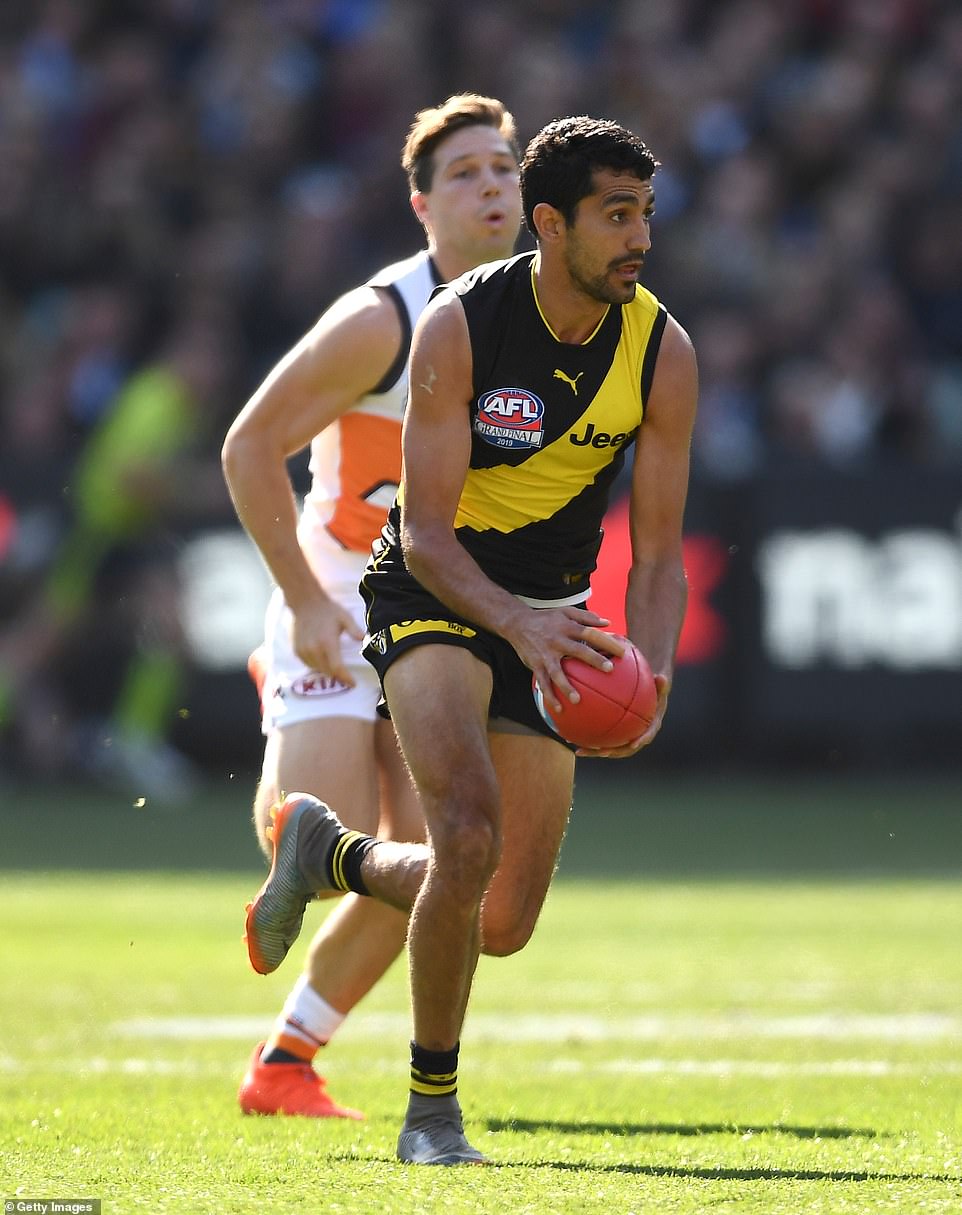 Marlion Pickett justified his shock selection for the decider, showing off his talent with a breathtaking blind turn 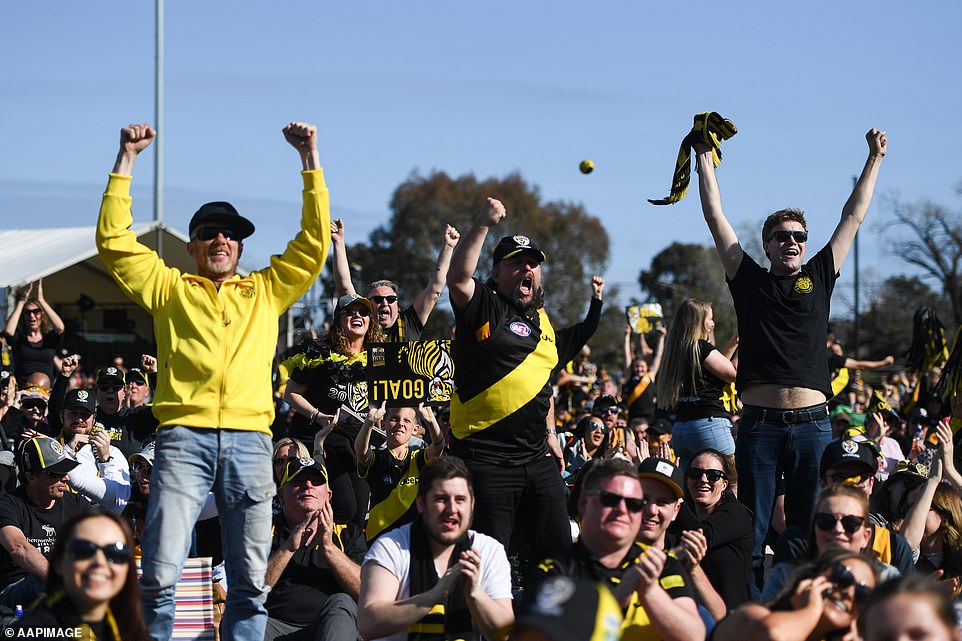 The score sat at 15-9 at the end of the first quarter.

Earlier, Tigers star Dustin Martin was sent to the ground during the first five minutes of the action after appearing to cop a blow to his head and eye.

Martin’s squad took an early 3-0 lead with a series of behinds, as they successfully applied pressure on the Giants. The Sydney team soon retaliated by scoring two behinds. 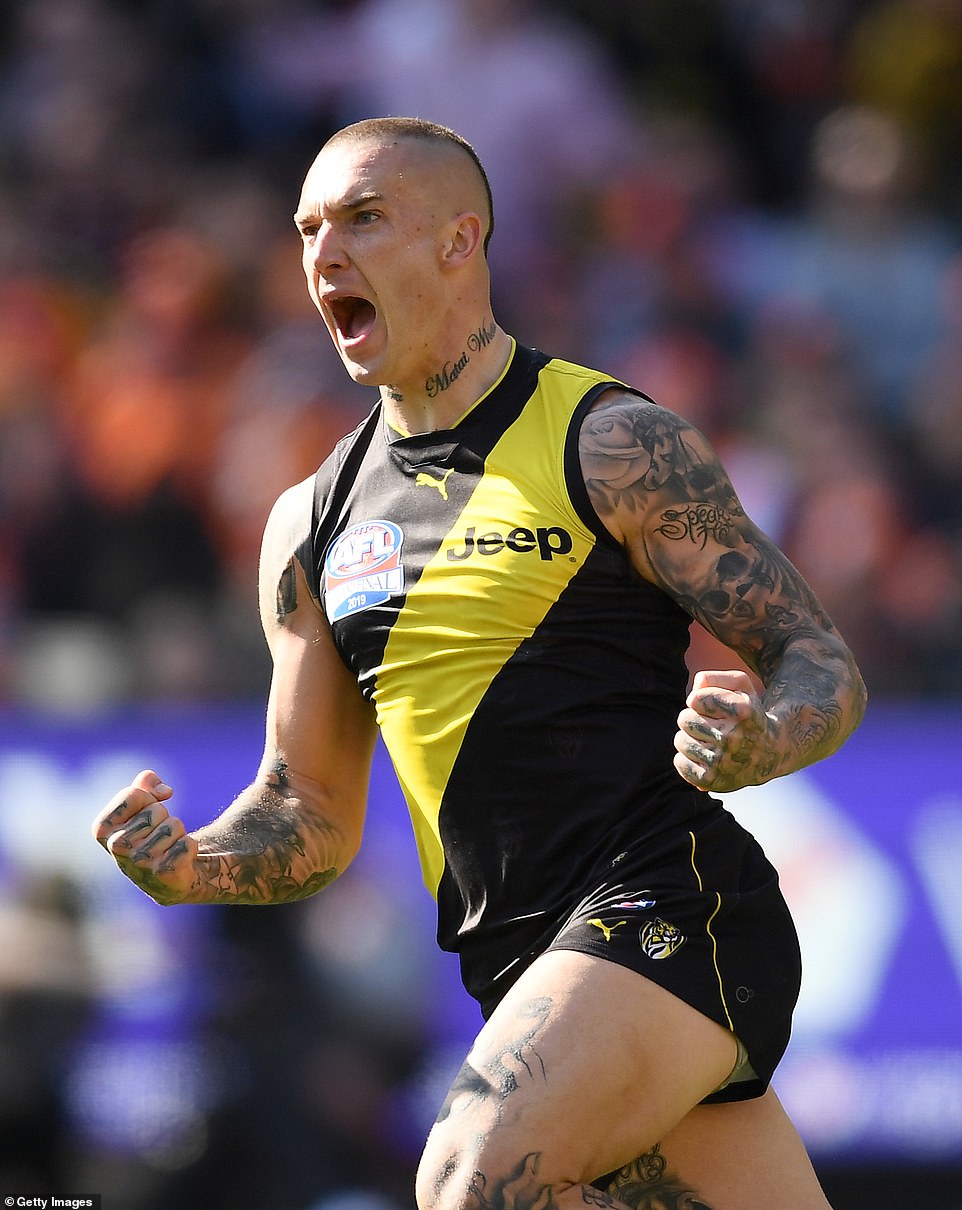 Martin found himself on the scorecard for a second time, joining the likes of teammates Tom Lynch and Jack Riewoldt who also kicked goals in the second quarter 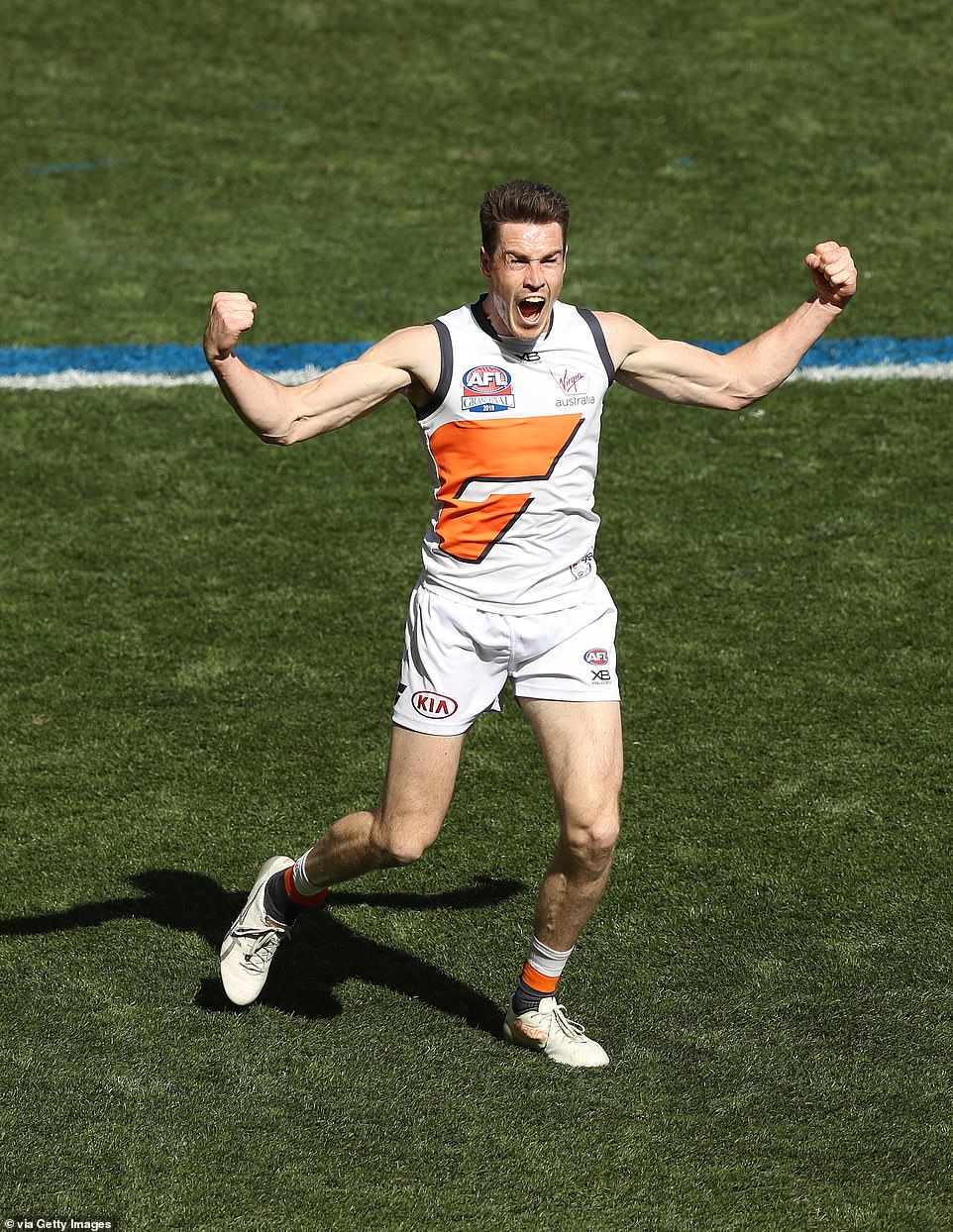 Jeremy Cameron, who has played with GWS since the club’s inception into the AFL, scored the first goal of the match with about four minutes left in the first quarter

Jeremy Cameron, who has played with GWS since the club’s inception into the AFL, scored the first goal of the match with about four minutes left in the first quarter.

Richmond’s Martin quickly followed with the second goal of the game, bringing the tally 9-8 in his favour.

Tigers forward Daniel Rioli beat the clock by a matter of a seconds, sending the ball soaring through the posts as the first quarter siren buzzed. 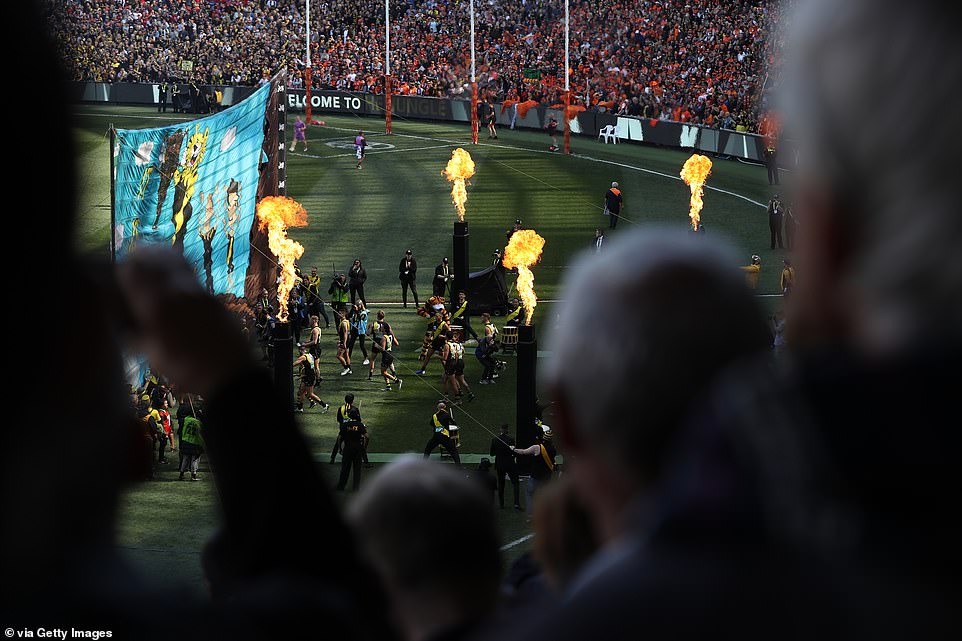 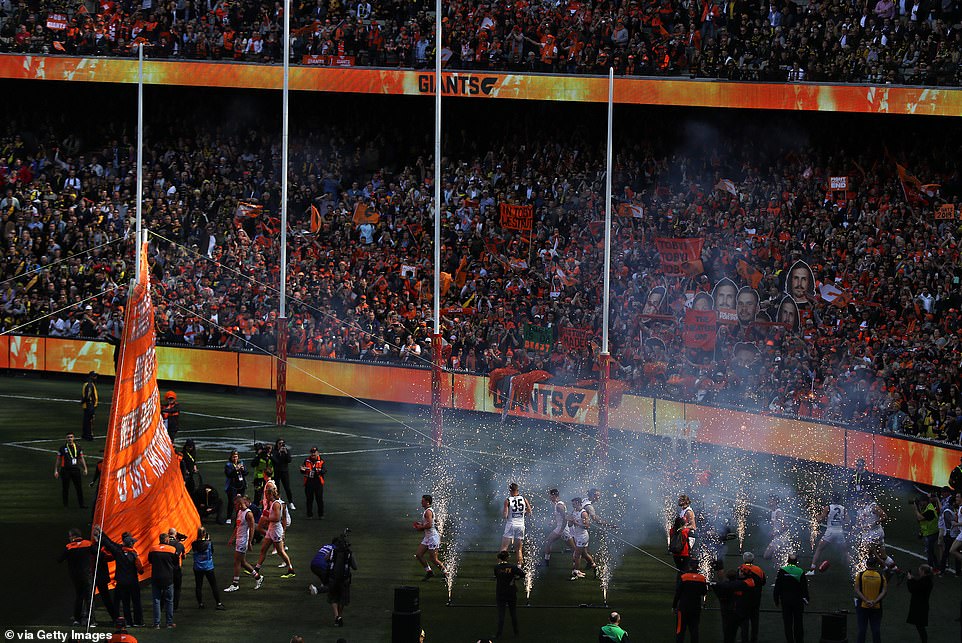 GWS Giants, known as the underdogs of the match, ran through a ‘started from the bottom now we’re here’ banner to the sounds of booing from the crowd 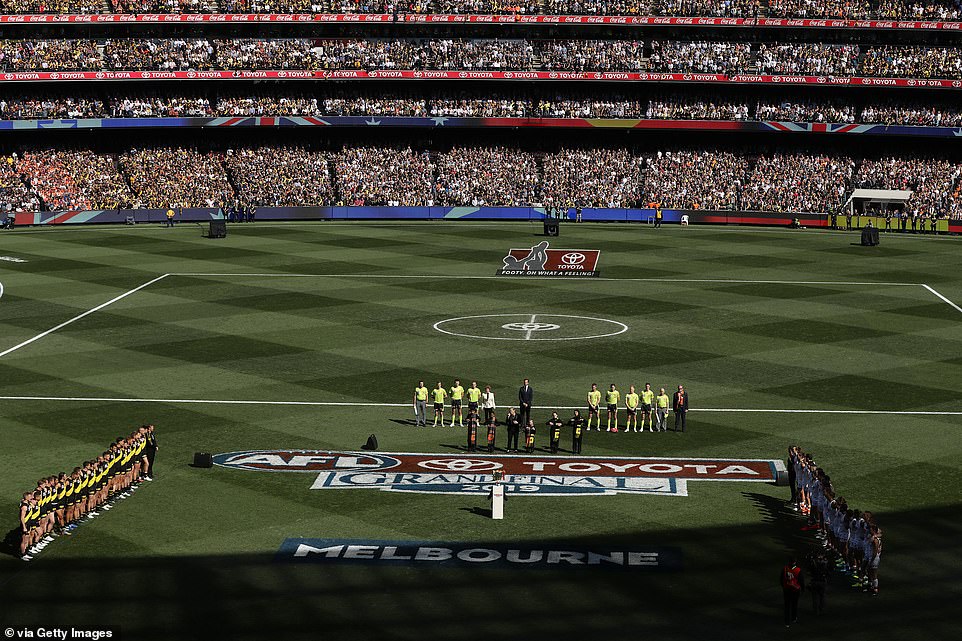 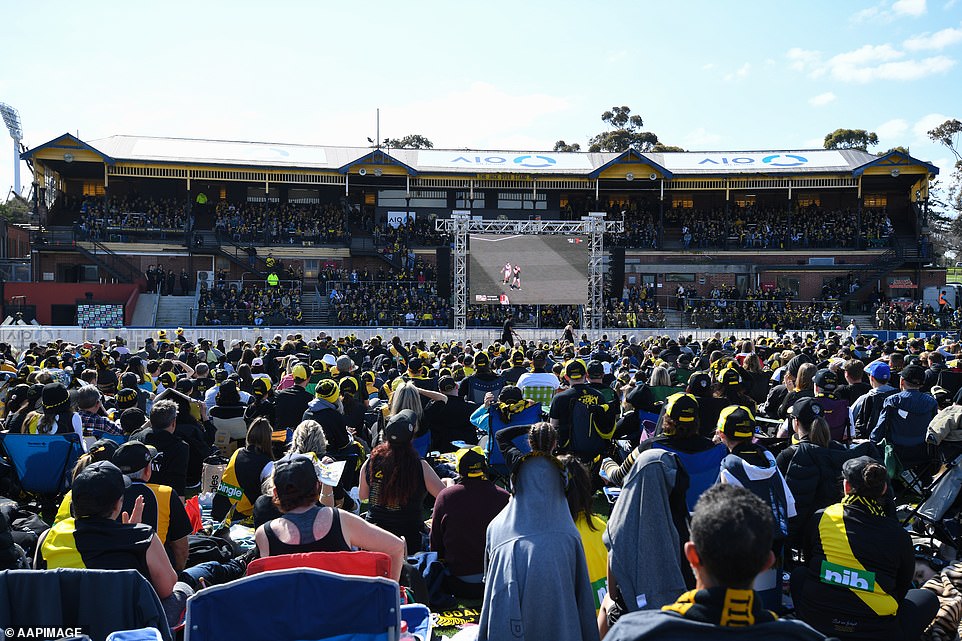 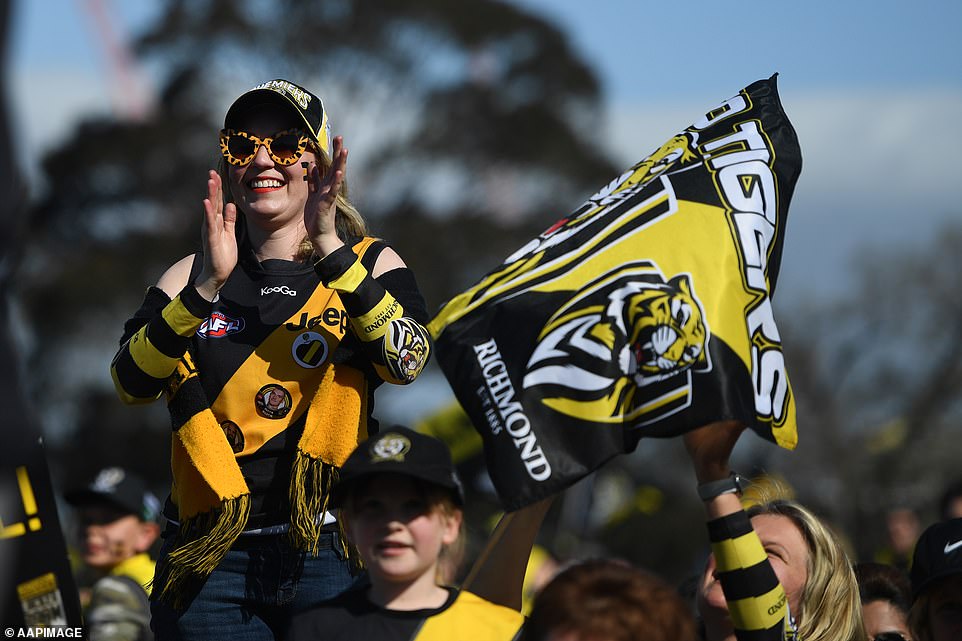 GWS co-captain Phil Davis took to the pitch, despite fears he would need to sit out the biggest game of the year due to a calf injury.

GWS Giants ran through a ‘started from the bottom now we’re here’ banner to boos from the crowd.

The Sydney team could win their first premiership cup if they defeat the Tigers, who are vying for their 12th flag.

Paul Kelly rocked the stadium during the pre-match entertainment, before Conrad Sewell sung the national anthem.

Prime Minister Scott Morrison was seen enjoying a beer from the crowds on Saturday, after returning from duty in the United States.

AFL stars retiring this year were driven around the pitch as part of the motorcade from about 1.30pm. 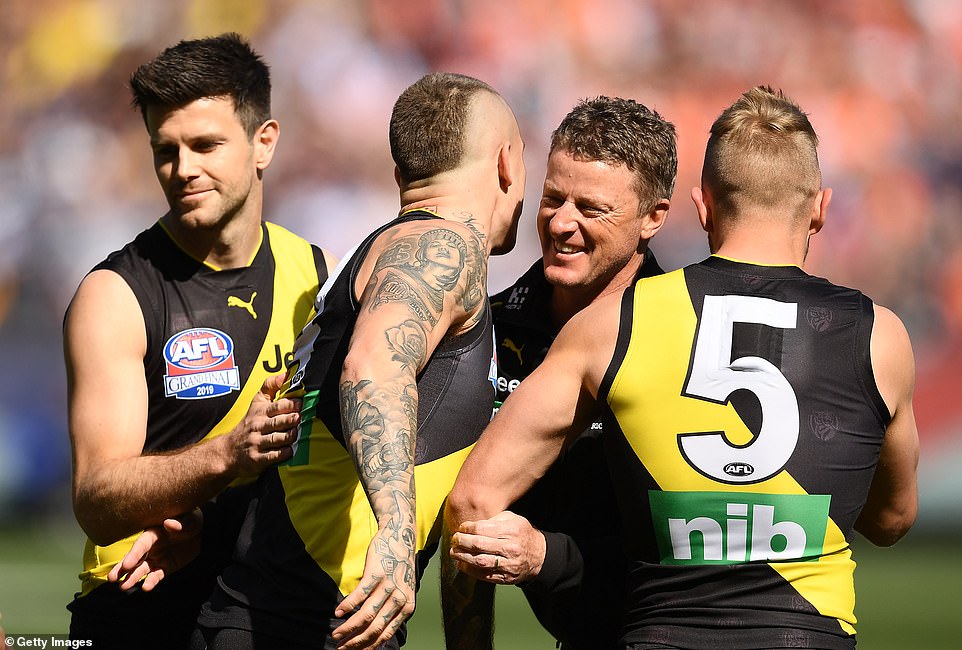 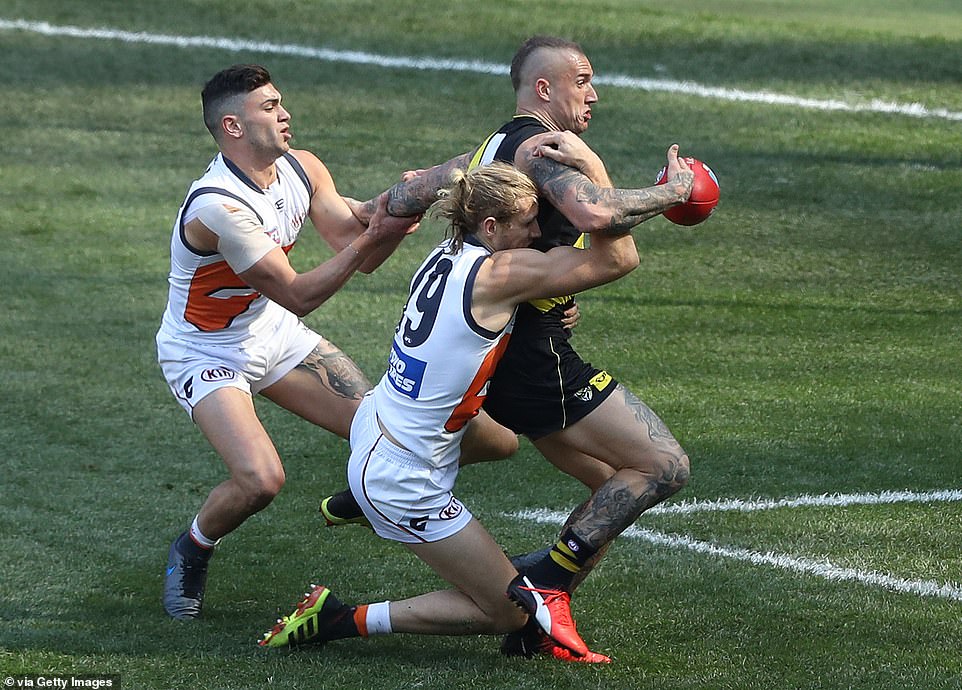 With less than two hours to go before the match, ground staff were seen desperately attempting to clean the field with brooms and leaf blowers.

The last-minute pitch problem was caused by an under-17s curtain-raiser, as players ran across white painted lines that hadn’t dried forcing officials to scramble to fix it.

White boot marks were seen scattered around the centre circle lines as crew members worked to dry the paint and clean the mess. 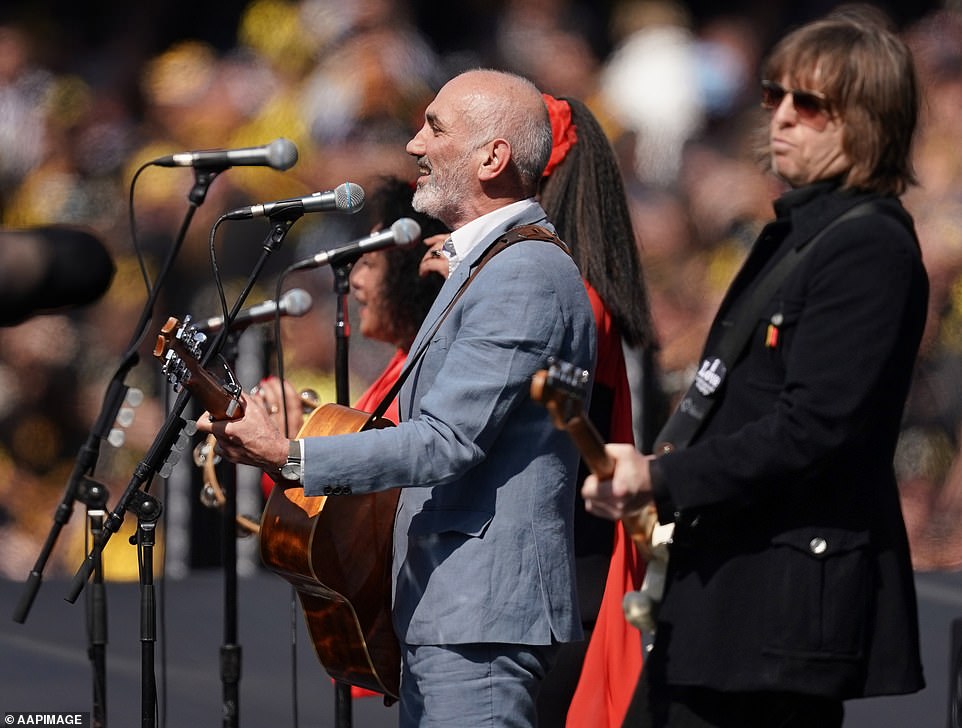 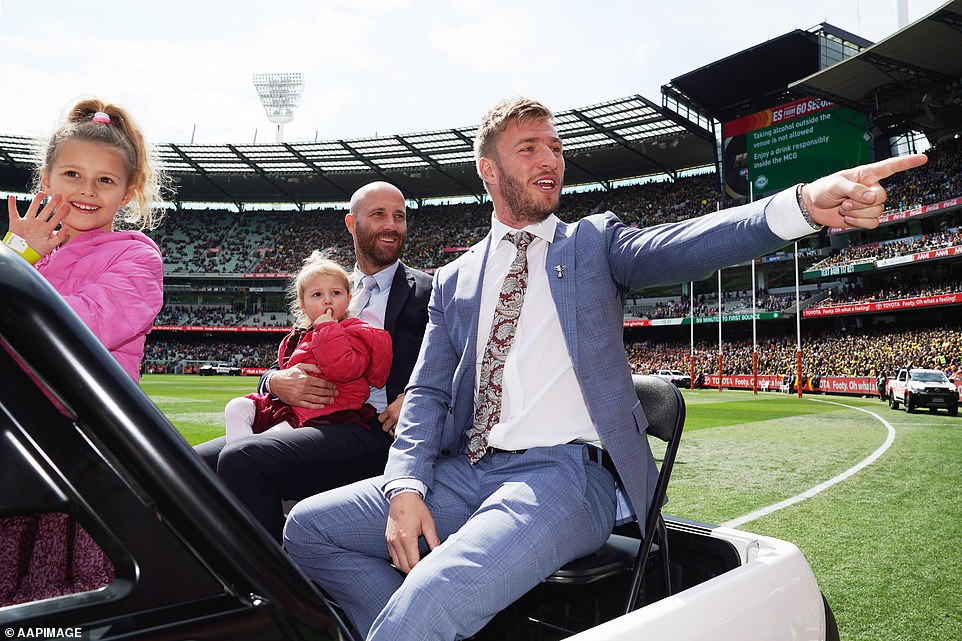 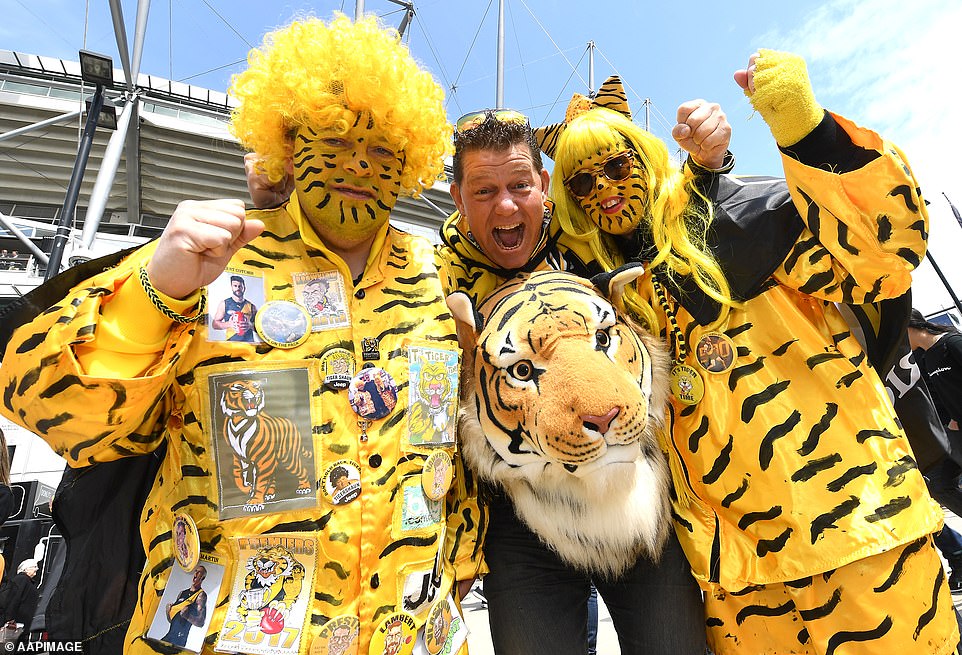 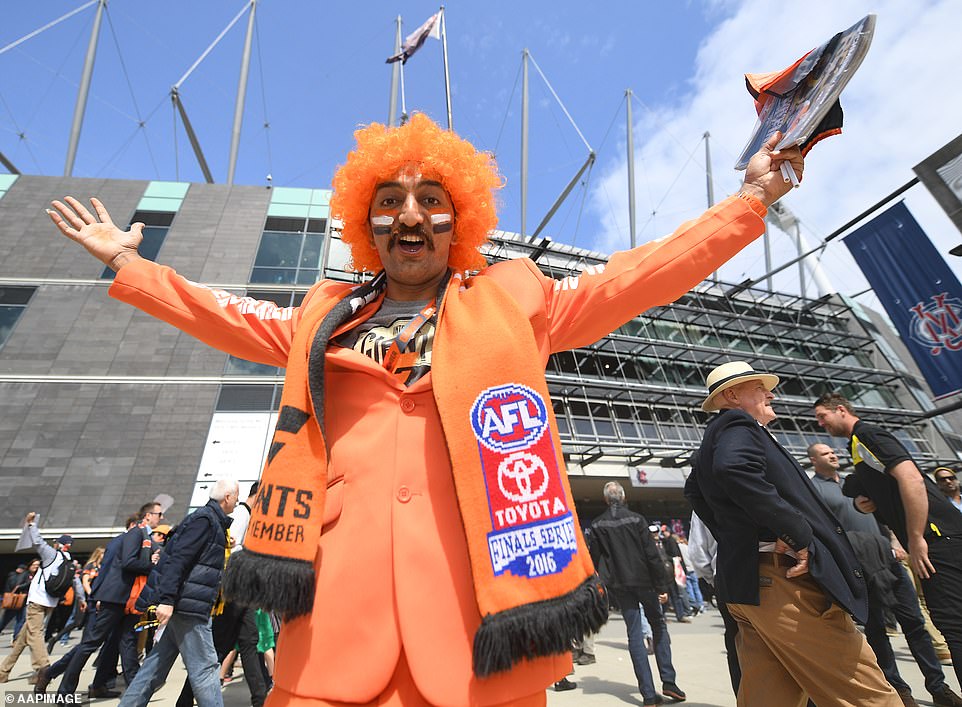 The Richmond Tigers will go head-to-head with the Greater Western Sydney Giants when the ball drops at 2.30pm 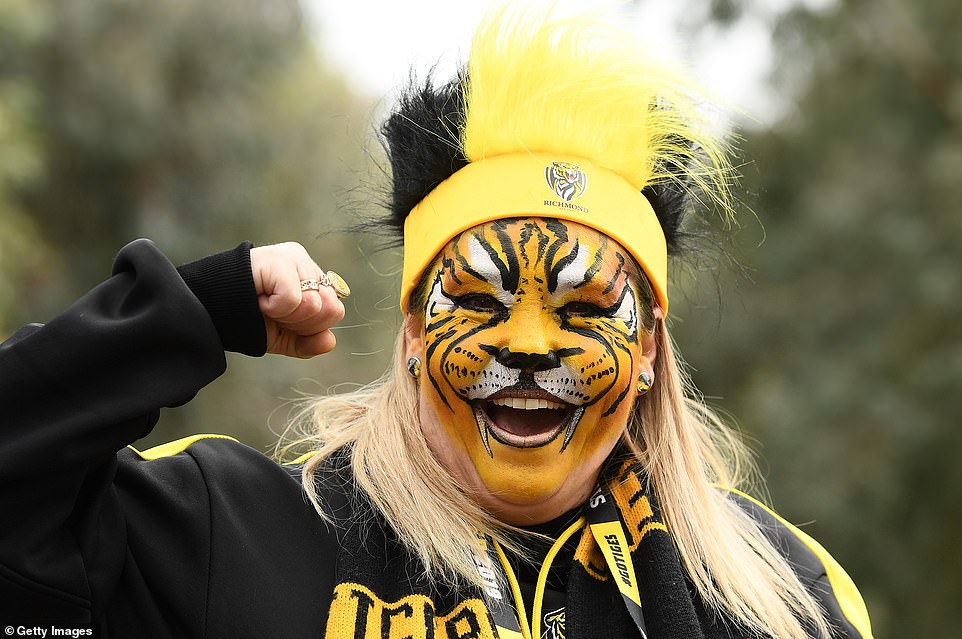 One Richmond fan went all out for the season decider, using face paint to dress up as a Tiger 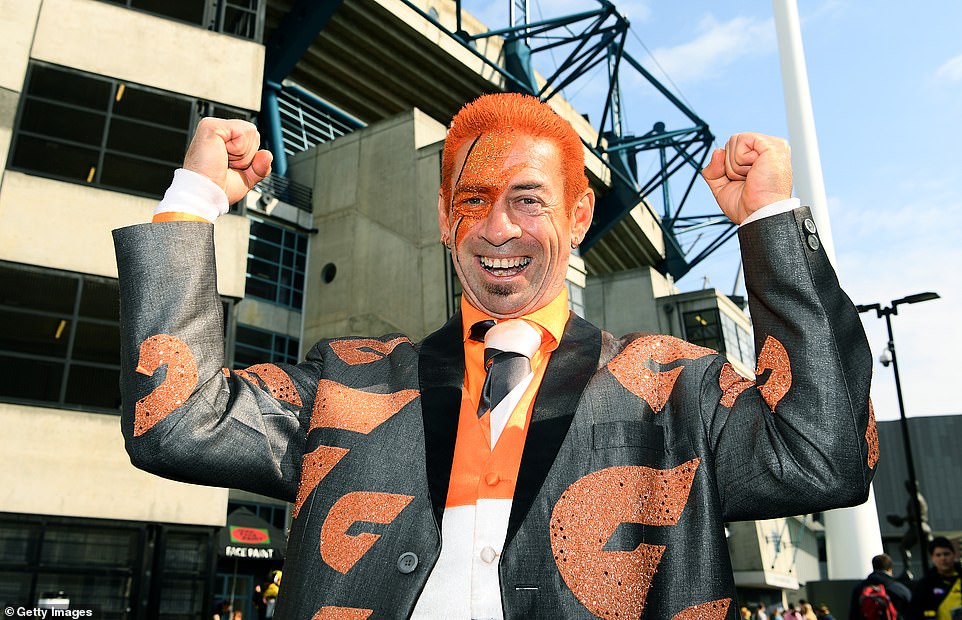 Richmond fans were seen arriving at the MCG in bright yellow costumes, wigs and tiger paint across their faces.

Giants fans who travelled from Sydney for the big day donned orange team scarfs and held signs like ‘fight until the end’ in preparation for the season decider.

If Richmond Football Club win Saturday’s final they will be crowned premiers for the 12th time in the club’s history.

The Tigers last won the cup in 2017 against Adelaide Football Club, where they beat the Giants in the preliminary final. 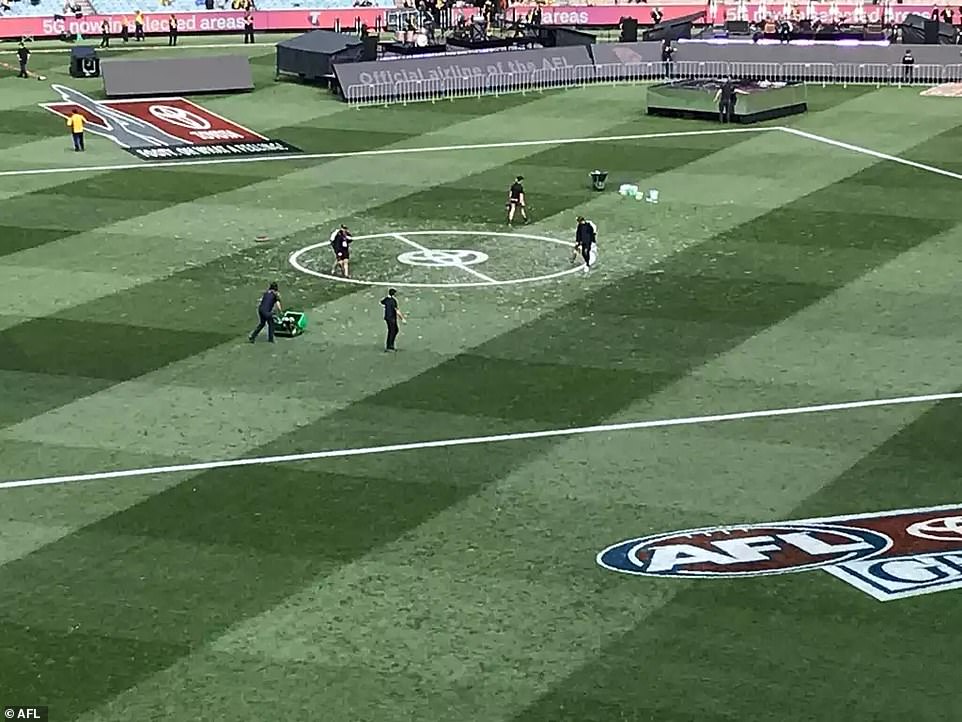 With less than two hours before the match, ground staff were seen desperately attempting to clean the field 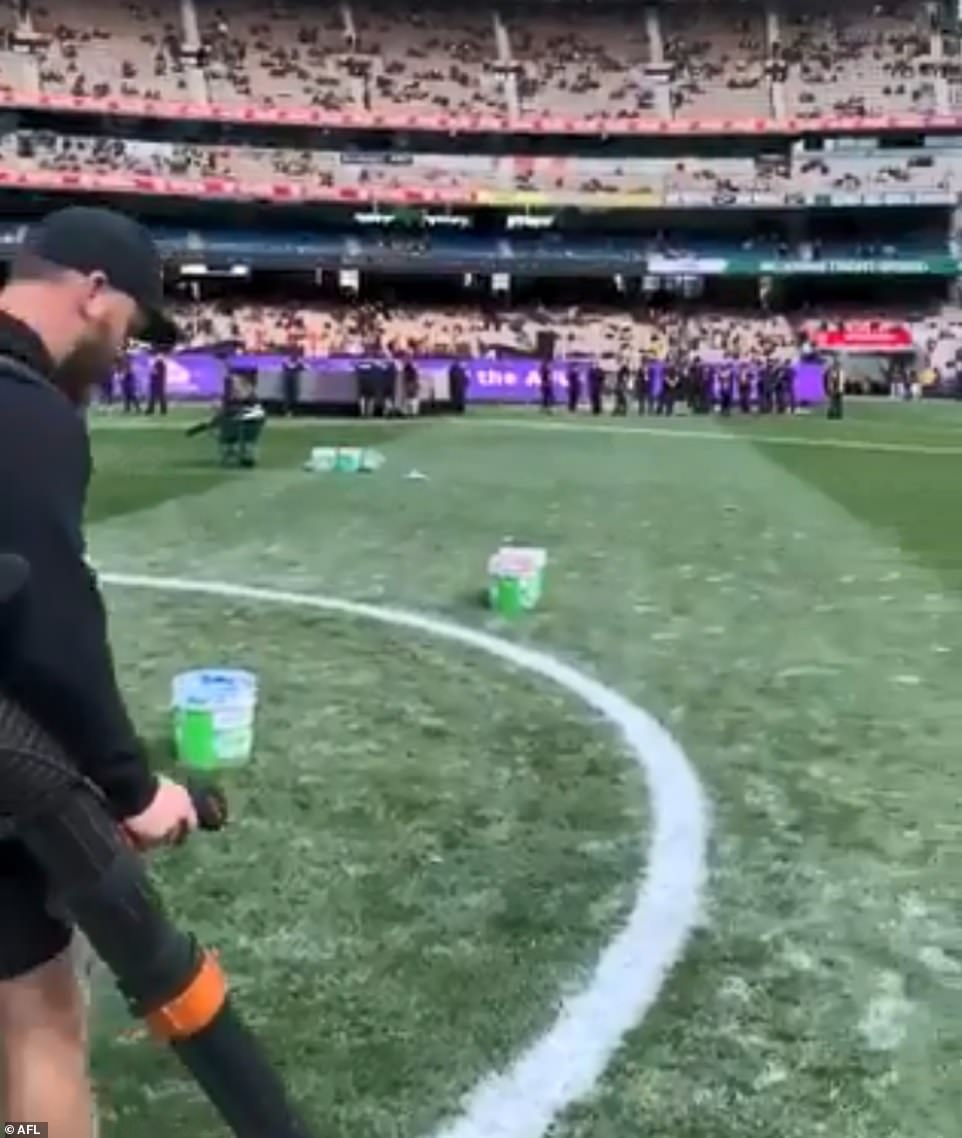 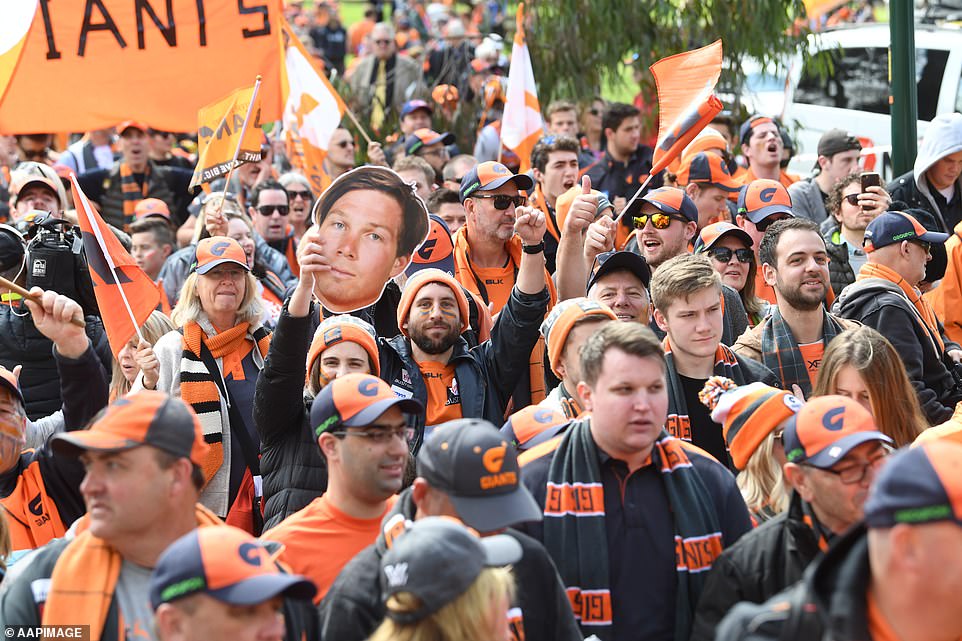 There is arguably more on the line for grand final rivals and underdogs GWS, who first entered the AFL in 2012.

In their debut season, GWS won only two matches and lost by more than 100 points five times. They were wooden spoons for their first two years in the competition.

A win on Saturday – their first grand final appearance – would mark the club’s first season victory. 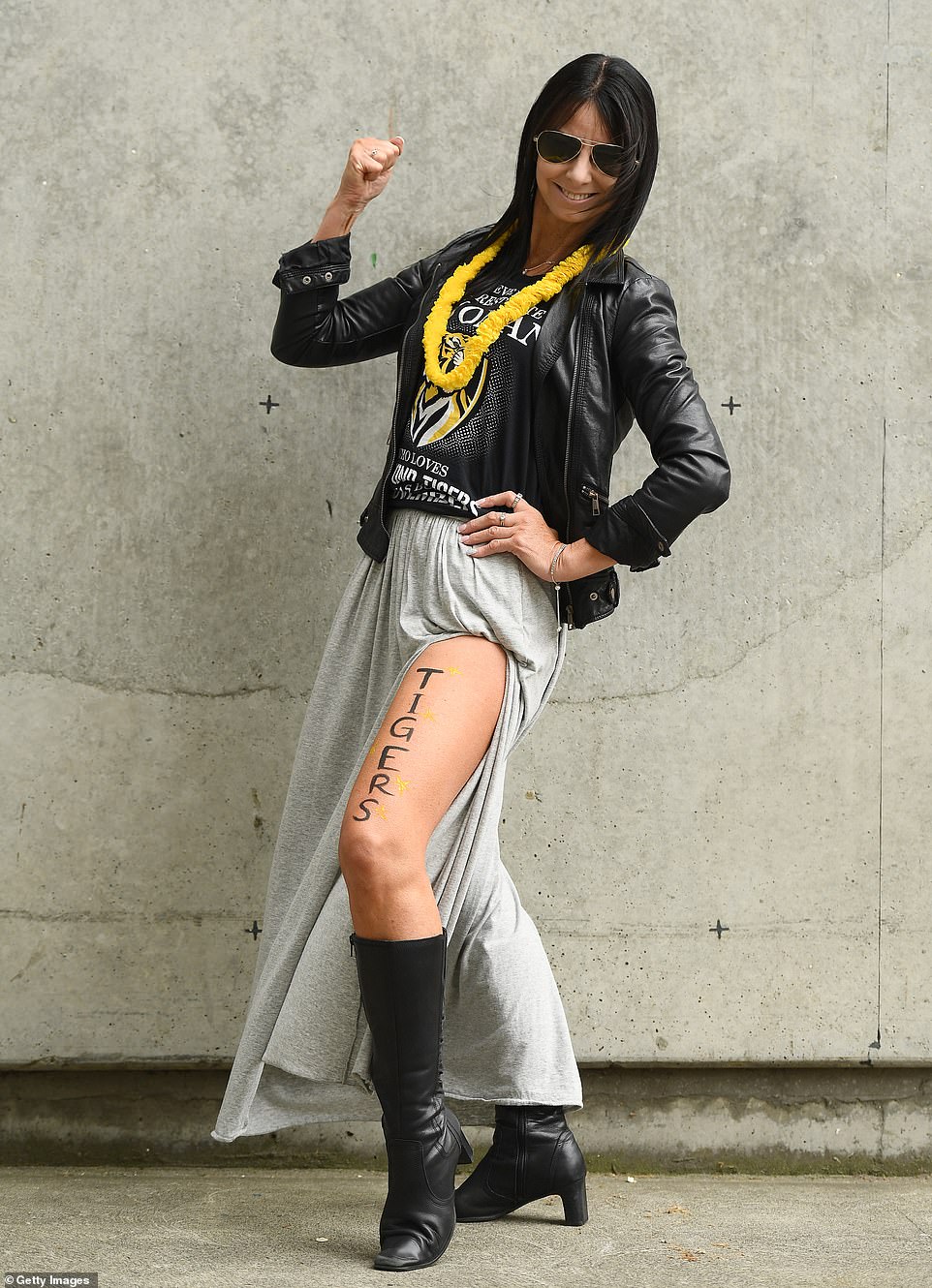 One fan painted ‘Tigers’ on her leg, to show her support through the slip of her skirt 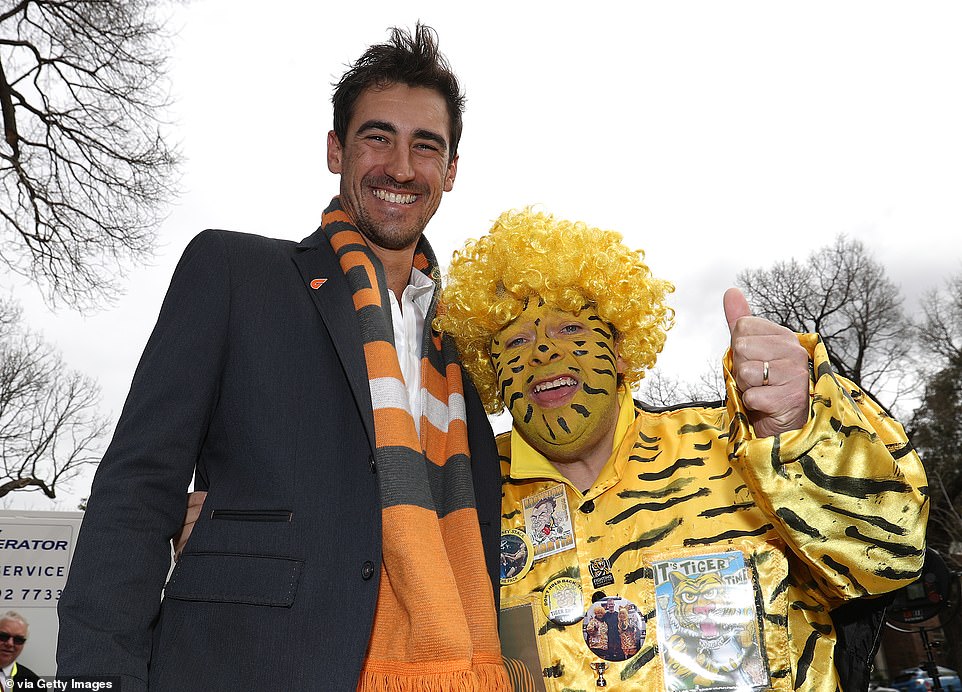 Australian cricketer Mitchell Starc shows support for his home city by wearing a GWS scarf. The bowler posed with a fan from the opposition 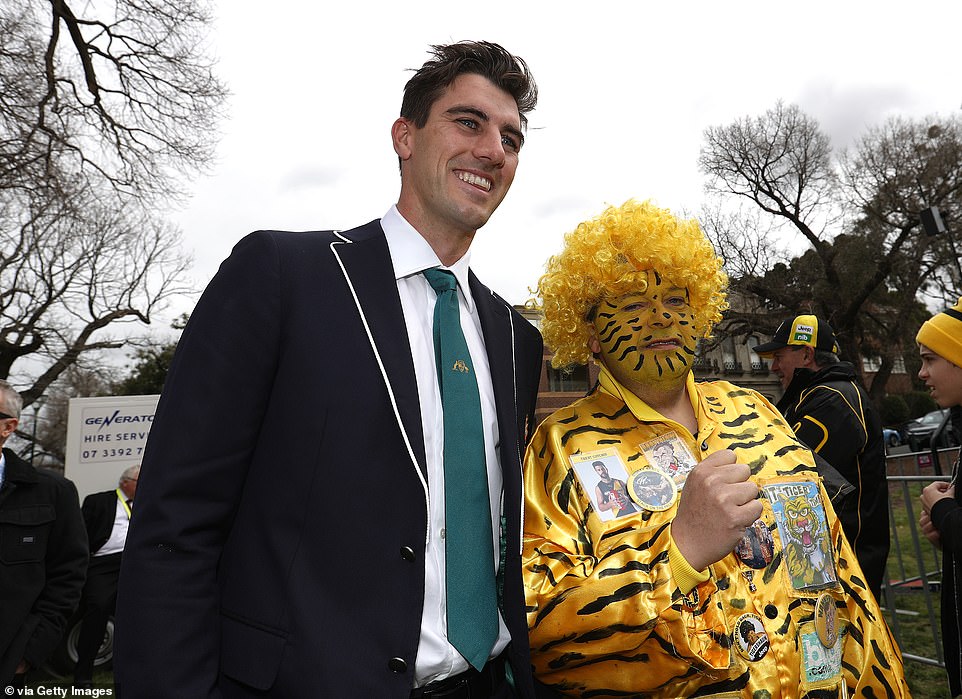 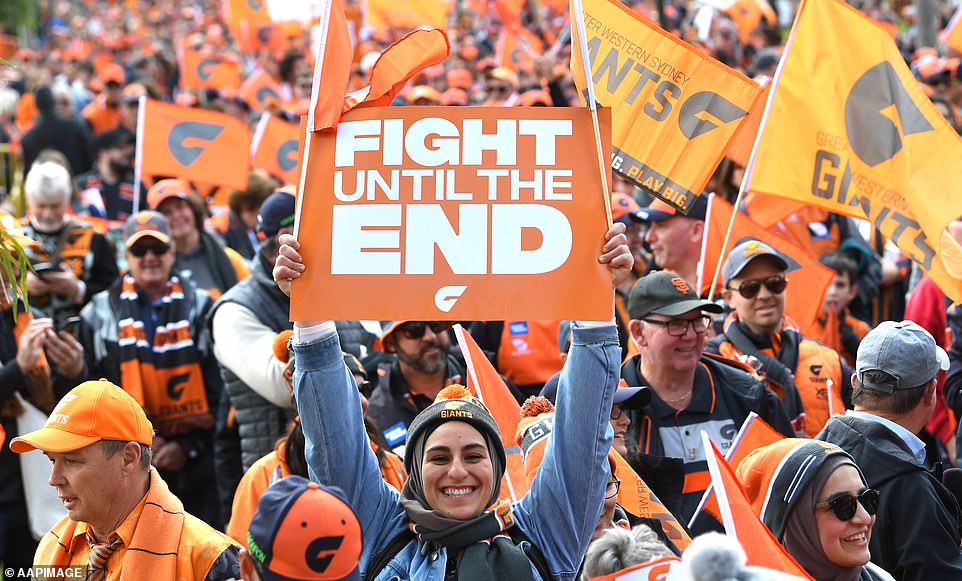 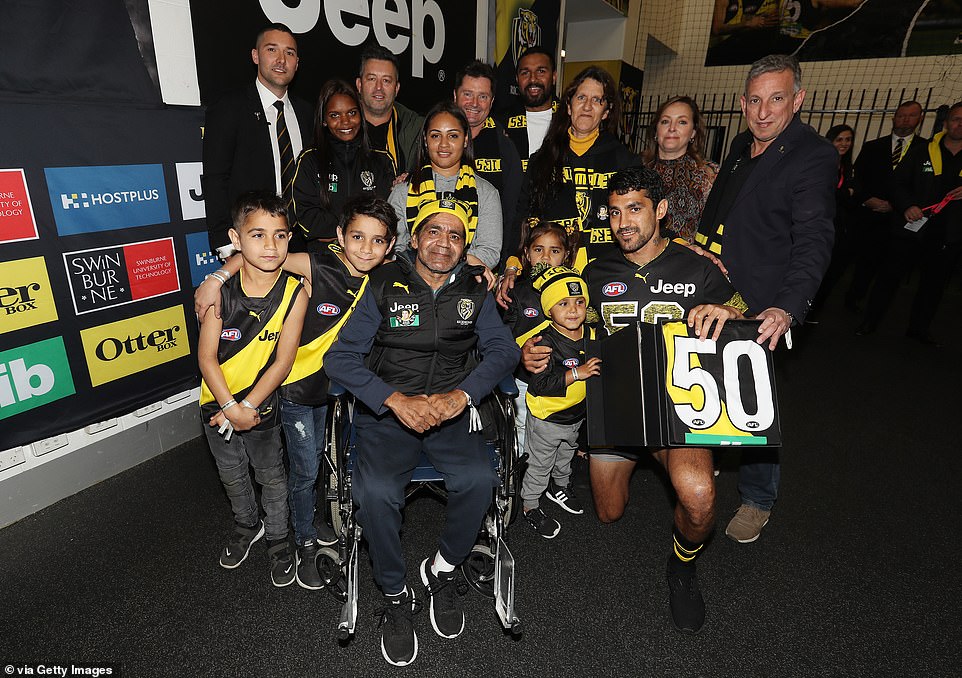